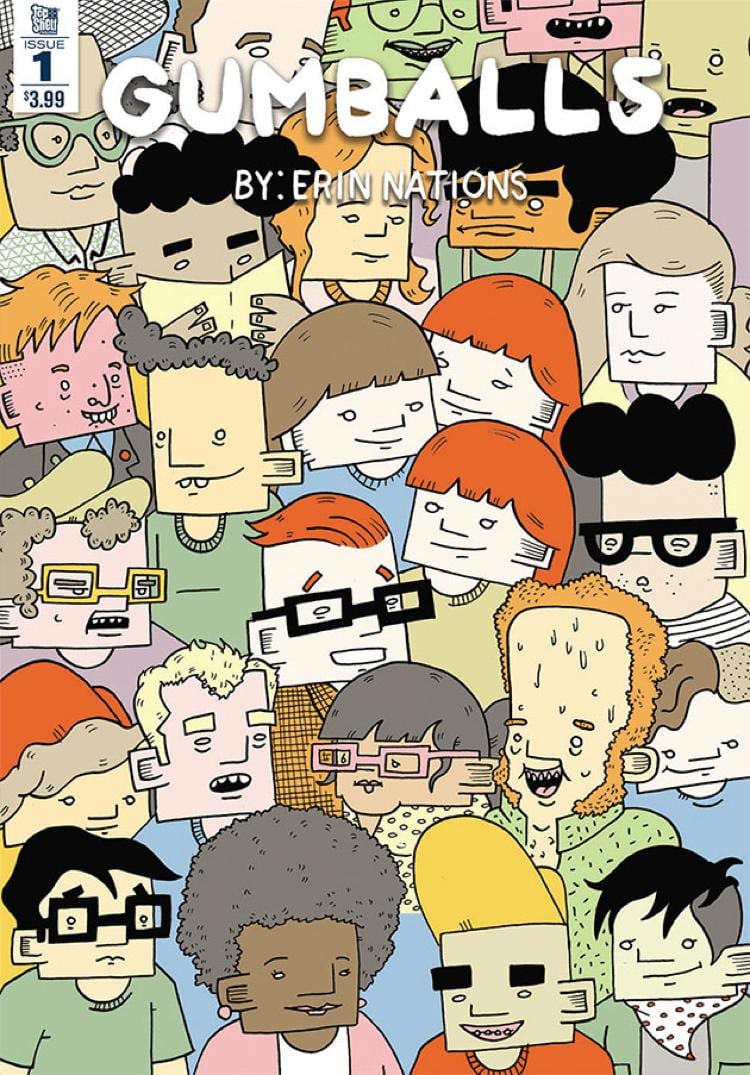 Gumballs embodies a different sensibility than most autobiographical comics, and not just because it comes from a trans author. Erin Nations started out by making webcomics, and brings that in-and-out story style to this series, the first four issues of which are collected in this book. Influenced by Dan Clowes and Adrian Tomine, Nations winnows short stories down even further, assembling a montage of vignettes, often utilizing single-panel entries. Furthering the webcomic feel, the table of contents even comes with a set of color-coded “tags” categorizing each story (for diary entries, reminisces on his past, encounters with grocery store customers, etc.).

Such structuring is hardly new but usually the result of form restrictions – the small space on a newspaper page, or the one-page-per-day website update. Given the freedom of a 30-page monthly title, Nations instead chooses to consciously embrace such limitations. No story in this collection runs longer than six pages, and most are only one. This and the range of “tags,” the intermingling slices of real life, the past, fiction, and artistic exercises, give Gumballs a freewheeling mood. There’s something of a throughline strung by Nations’ documentation of his transition, during which he undergoes hormone treatment and becoming somewhat more comfortable in his own skin. But there’s no distinction between different individual issues of the comic, and the book does not end so much as it comes to a stop.

This is not a flaw, but instead built into the experience. The effect of Gumballs is less like a diary and more like a social media feed transmuted into book form, with scrolling a screen replaced by flipping pages. Nations gave the series its title in reference to descriptions of his color palette as bright and candylike, but the name also suits his vibe as a storyteller – reading Gumballs is like getting different bite-sized experiences vended to you one at a time. For Nations, self-described as intensely introverted, this is a middle ground between complete memoiristic interiority and incorporating other points of view into his work. Many of his shorts speak to a desire to connect but trepidation toward people, and with Gumballs he charts both his own gradually mounting self-actualization as a trans man and his imaginings of other people’s thoughts. 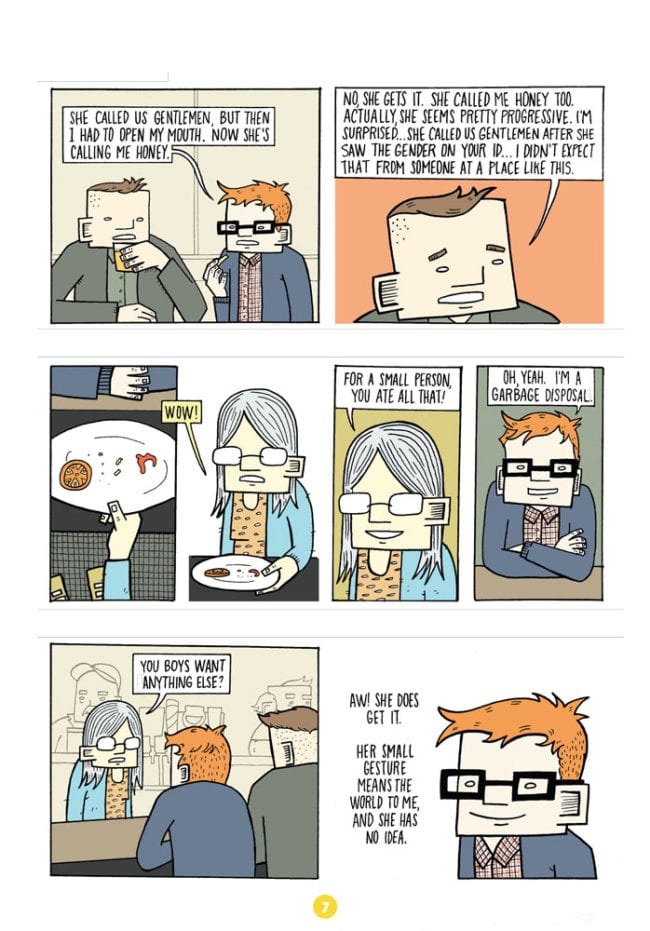 This manifests in both positive and negative ways. Nations has worked for more than a decade in customer service and thus has an (entirely justified) antipathy toward many customers, and real-life nightmare encounters find their way into various shorts. On the flip side are the good times, like the time a woman he didn’t know properly gendered him. In the middle ground are other experiences, or the fictional episodes, such as the humorously blunt personal ads. Another recurring bit follows Tobias, a hormone-addled gay teen, in a series of meditations on awkwardness and youthful romantic yearning. Gumballs finds its most poignant moments in the bleeding together of the quotidian and overwhelming emotion. In one sequence, Nations depicts going through a difficult New Year’s Eve with grief over the news of a trans teen’s suicide lurking in his head. It’s a powerful evocation of trying to maintain your center despite the world knocking at you from multiple directions. 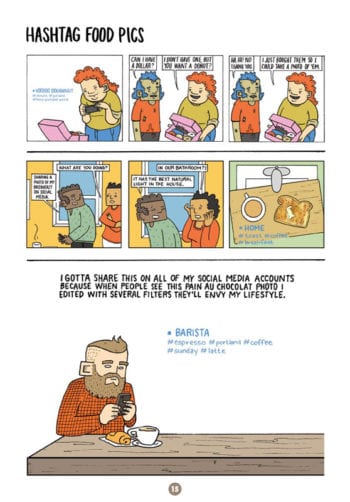 Nations’ drawing style emphasizes angularity and few soft curves. He names Matt Groening as a major influence, and you can see it in the lovingly ugly-cute way he depicts people. Like many graphic novelists, the cartoony aesthetic cushions some intense subject matter, from physical dysphoria to mental illness to sexual assault. It also renders the mundane and the clinical, like descriptions of Nations’ physical changes during hormone therapy, into a visually engaging format. Nations continually expresses anxieties connected to his body, and in that light the abstraction of the human form on the comics page takes on new meaning. Gumballs isn’t a retreat from the real world, or precisely a safe space, but it lets him process the messier aspects of his life through a lens he controls. The book never preaches on any subject at a volume louder than respectful assertion, but that control imbues it with some hefty inspirational power.

A grab bag of ideas as varied as this is bound to include a few duds, and some of the individual “gumballs” fail to make much of an impact. Sometimes a chapter will go so deep into a slice of life that it runs past mundane into the banal. (Think an arcade machine labeled “Gambling for kids,” or a bit on a cat wavering between going inside or out which seemingly every single webcomic has done a variation on.) In general, the series doesn’t elicit more than a knowing smile or a sensible chuckle. That seems intentional, as Nations seeks gentle familiarity with the reader rather than anything too “big.” Everything about the book is modest, and that might come across more as muted for some readers. For myself, it was a comfortable read, sometimes too much so (inert jokes or passages that told too much instead of showed), but sometimes in a harrowingly intimate way (one segment about thinking over an argument you never actually make hit extremely close). It’s good and vital for more trans authors to get footholds in professional publishing, but Gumballs is gratifyingly not just “important,” but also worthwhile. 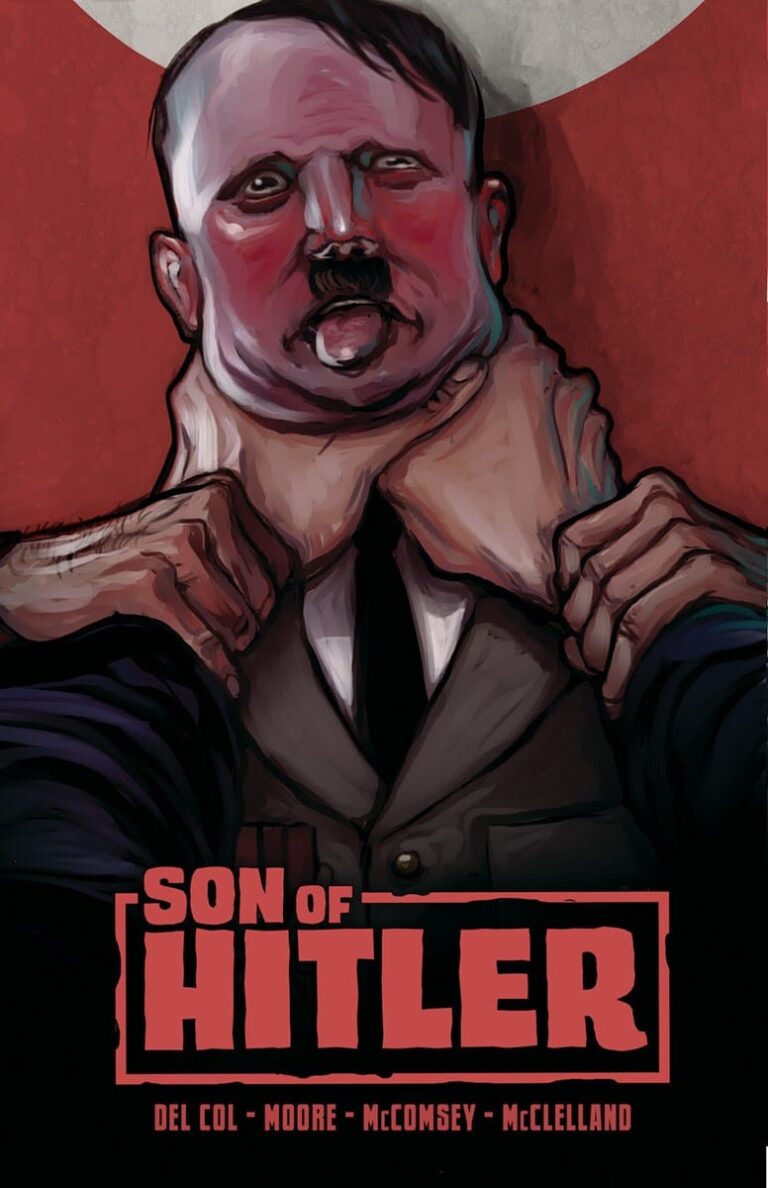 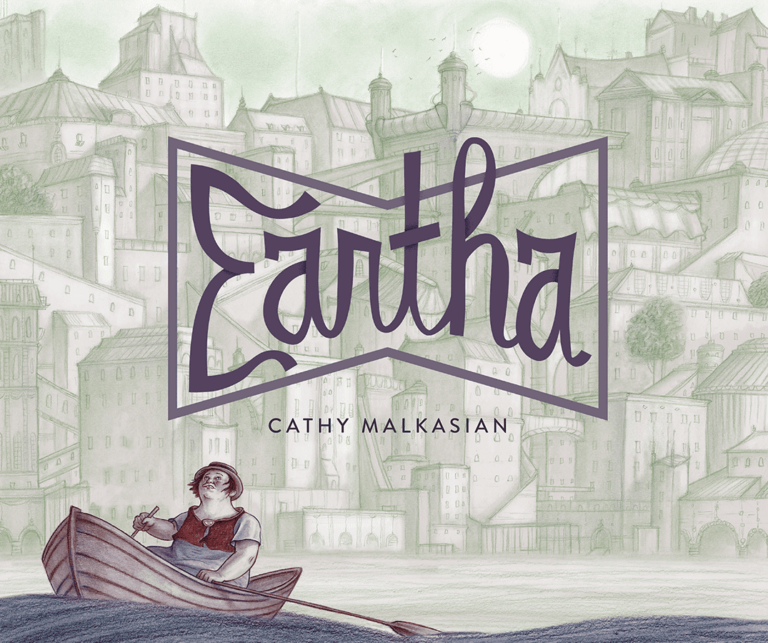