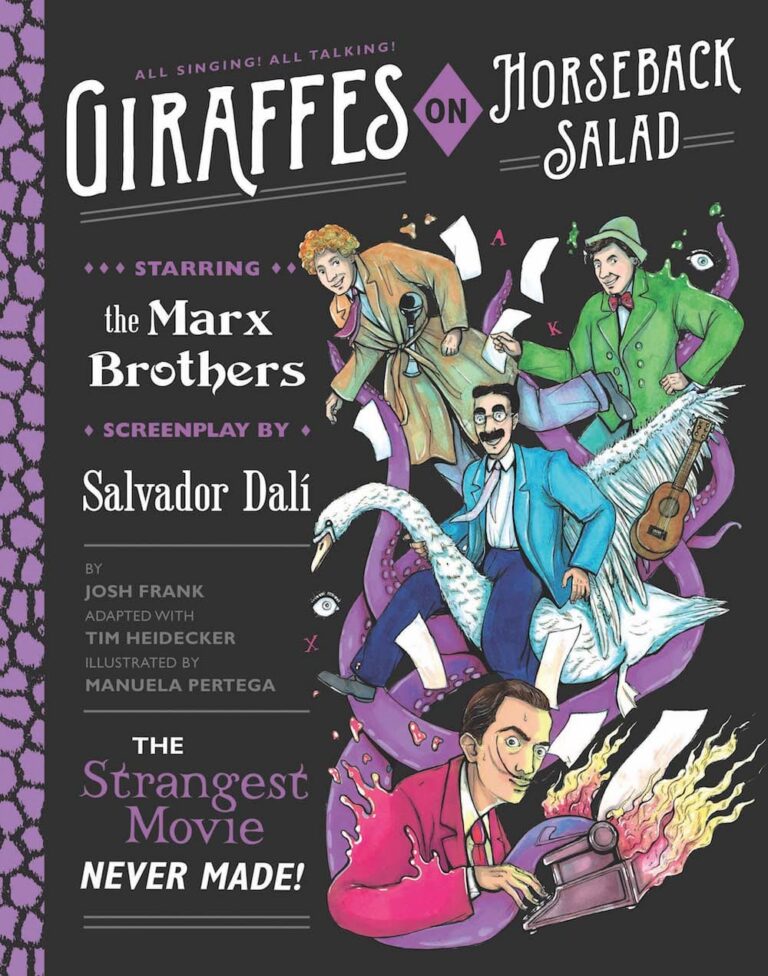 Subtitled Salvador Dali, The Marx Brothers and The Strangest Movie Never Made, Josh Frank and company’s Giraffes On Horseback Salad has an irresistible real-world  premise. In 1937, mutual admirers of one another’s work Salvador Dali and Harpo Marx met with MGM studio head Louis  B. Mayer to pitch him a movie. Mayer was never a fan of the Marx Brothers, despite the fact that their A Night at the Opera was a hit for his studio, and he was only dealing with them at the time due to the untimely death of Irving Thalberg, who had produced both that film and the subsequent A Day at the Races.

Mayer declined to pursue a Marx/Dali film. He was hardly the only one skeptical of a Marx Brothers movie written by a Spanish surrealist painter whose short film resume included the short film Un Chien Andalou. Groucho reportedly responded to the treatment with a simple “It won’t play,” and thus Dali’s Giraffes On Horseback Salad or The Surrealist Woman became another one of Hollywood’s legendary films-that-never-were.

Enter life-long Marx Brothers fan Josh Frank, a playwright, author and self-proclaimed “archaeologist of forgotten pop culture.” Unable to travel back in time and convince Mayer and the other Marx Brothers to give Harpo and Dali’s passion project a chance, and not being a modern day studio head himself, Frank did the next best thing in order to bring Giraffes to life: he produced a graphic novel adaptation/extrapolation of the treatment.

Frank tracked down every scrap of information he could find about the project. Not just Dali’s invaluable “Giraffes notebook”--including a version of the treatment,  as well as sketches and a  list of ideas for gags--but also Dali’s writings about meeting Harpo, their correspondence, and what was going on in Dali’s life at the time. He then enlisted comedian Tim Heidecker of Tim and Eric Awesome Show, Great Job!  to help him write the script, with some of Heidecker’s collaborators from the show contributing original dialogue and gags as part of an informal writers’ room. Research might have provided Frank with Dali’s contributions to the film, but he would need a comedian to provide some of the Marx Brothers comedy to Giraffes that the the Brothers themselves so obviously could no longer provide. Spanish artist Manuela Pertega was recruited to draw the whole thing and, incidentally, she provided the American/Spanish cross-cultural collaboration that Harpo and Dali would have had. Noah Diamond, who had previously revived the Brothers’ 1924 off-broadway musical I’ll Say She Is, was approached to provide some “musical numbers”--actually just pages of lyrics set to art-- as there would have been musical numbers had the film actually have been made.

Having read what this large and unlikely creative team have come up with, and trying to think of it as the sort of paper movie it aspires to be, I must rather regretfully confess that Mayer probably made the right call back in 1937 in not attempting the film. And not just because of the challenges involved in bringing some of Dali’s wild ideas, like the titular giraffes, which bear manes of flame running up and down their long necks and sloping backs, to film.

No, the main problem of Giraffes as a Marx Brothers narrative is how greatly it violates the rules of the Marx Brothers. Groucho and Chico appear throughout, working with and for The Surrealist Woman and playing characters much like those they have in all of the films that they had made up to that point--although in perhaps less adversarial roles, in which the pair flip-flop playing straight man to one another every other line. But Harpo, somewhat ironically, is barely in it. 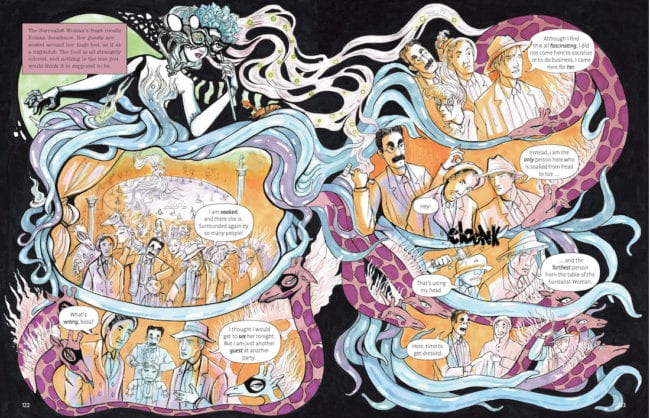 Instead, the protagonist is Jimmy, a brilliant exiled Spanish aristocrat who has come to America and conquered the worlds of industry and business with his relentless energy and a steady stream of ingenious inventions. He gradually turns into Harpo at various points of the story, until finally transforming into a composite of the two characters by the end. As the young, handsome lead, Jimmy is the sort of character that another actor would have been cast to play, or, if Harpo--or rather, Arthur Marx, sans wig, top hat and coat--would have played him, it would have involved an awful lot of talking, something Harpo never had and never would would do on film.

After another successful day of doing business stuff, Jimmy goes to a fancy club with his vapid, mean and unfaithful fiancee Linda and a group of her irritating upper-class friends. There he hears rumors of the mysterious Woman Surreal, a famous, rich eccentric spoken of in almost mythic fashion, who is supposed to appear there that evening. She does, in the company of hypemen Groucho and Chico, both of whom ruthlessly antagonize Linda as if she were Margaret Dumont while Jimmy and their boss begin an acquaintance that blossoms into a romance.

While The Surrealist Woman, true to her name, changes form constantly--she will appear with a torso of melting wax, or with arms like a marionette, or with wings for arms and a body that tapers into the serpentine neck of a goose, its head where her feet might be--her face is never shown in its entirety. She’s in constant flux, but is always strange-looking and baroquely designed; alternating between something relatively grounded like, say, Lady Gaga during her most outrageous periods and fine art sculptures or human-shaped installation art come to life.

Her weirdness is gradually incorporated into the plot, as she seems to have been born with a special, reality-warping power that she has hidden much of her life, allowing her to channel her emotions and imagination in such a way to make them manifest. (This is one of the several instances in which Frank and Heidecker’s script seems to abandon its self-established rules of having been made as if it were 1937, as the Woman’s ability being almost a mutant super-power is very comic book-y take; most of the other violations, like Groucho’s crack about actor Ronald Reagan being president someday, come in the form of anachronistic jokes.)

Eventually, The Surrealist Woman and Linda’s rivalry for Jimmy’s affection turns into an actual war between, on one side, the forces of imagination, creativity and the Hollywood idea of a Lewis Carroll-like “madness”, as represented by The Woman and The Marx Brothers, and, on the other,  the forces of order and reality, as represented by Linda and various authority figures. While at least one battle is fought on the page, the issue is resolved in a courtroom, in a scene reminiscent of Chico’s trial for treason at the climax of 1933’s Duck Soup. 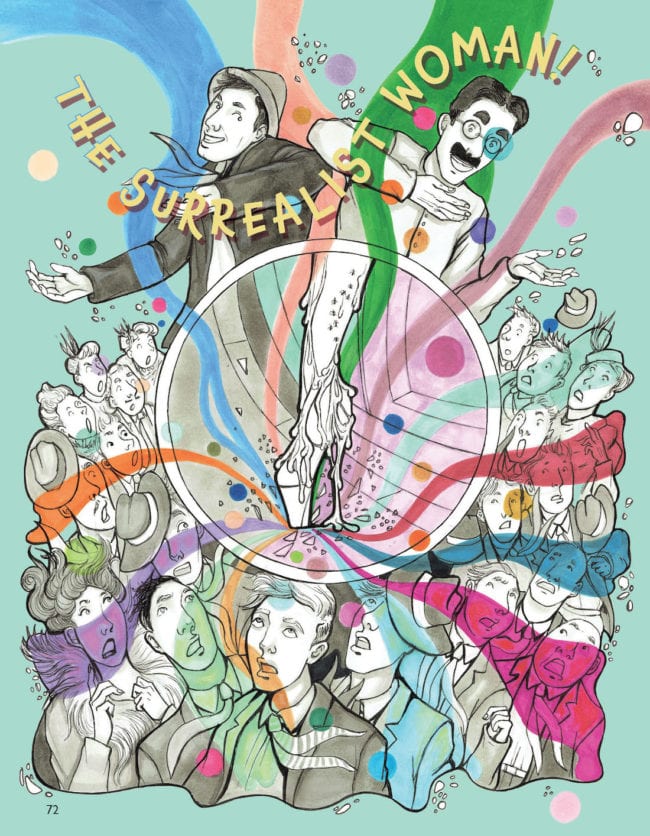 Formally, Pertega doesn’t stick with the graphic novel-as-film premise. The layouts in the first few scenes of the first act are fairly standard comic book ones, although they are more inventive than the expected regular grids of a comic-imitating-a-film, and they lack the standard pacing of a film. By the time the Surrealist Woman--and Chico and Groucho--arrive, the layouts get weirder, and, using the old Wizard of Oz trick, color arrives to differentiate between the mundane and the fantastical. The first violation of the black-and-white palette is the green of a cartoonishly long limousine that the Surrealist Woman arrives in. From there, color comes and goes along with her influence, and the borders between panels can be composed not merely of lines and space, but of liquids of various colors and viscosity, or of objects like tentacles or books, or the disembodied hands which are a running visual gag throughout the book.

While Pertega’s layouts break the idea of the comic as a "film", it benefits the surreality to see a medium refuse to act like itself, or play by its own rules? Her work, more than the writing, seems all around less invested in the idea of making a movie-like comic. Her Marx Brothers aren’t designed to be representations of the real actors, but are abstracted to the point that if, for example, you stripped her Groucho of his requisite mustache, eyebrows, glasses and cigar, he would look no different than the way she depicts Chico, Jimmy or Harpo, barring their own visual signifiers.

Likewise, the other characters aren’t seemingly based on real actors or even real people, but are created on the paper as rather generic, sketch-like designs of various types of people. While one imagines an artist could have a lot of fun with coming up with Marx Brothers character designs, the relative blandness with which Pertega imbues them allows for the more wild imagery of The Surrealist Woman and her powers to create a sharper contrast with the real world she moves through. It’s difficult, even counter-productive, to try to imagine the story of a comic divorced from the art, although on one level that’s just what Giraffes is asking a reader to do; read this comic, but un-read the comics part and de-reverse engineer it back into a movie in your imagination.

Like Frank, I too am a lifelong Marx Brothers fan, and I suppose that maybe, just maybe, they could have zagged instead of zigged back in 1937. Maybe if Thalberg had lived a little longer they could have tried. Maybe Harpo could have played Jimmy as a vocal singing and romancing lead...or, at the very least, they could have had Harpo play the alter ego and cast someone who looked like a young, handsome, Spanish version of Harpo to play Jimmy. Maybe MGM could have used traditional 2D animation or stop-motion animation on the  flaming giraffes, all those flying disembodied hands, The Surrealist Woman and the other surreal imagery, and then spliced those elements into the film.

But I still can’t quite see it--Groucho’s instincts were probably correct, and it just wouldn’t have played. By making the closest thing to a film they could have made, I think Frank, Heidecker, Pertega and company demonstrate how Giraffes just wouldn't have worked...as a film.D

So does it work as a comic? I don’t know. The book contains a lot of history to support the what-if, to prime the readers’ pump for experiencing the reconstructed, translated and transmuted Giraffes, and that comes in the form of prose or illustrated prose. That stuff is all quite interesting, and, perhaps, the story of how this film never got made, and of the intersection of Harpo and Dali’s biographies, would itself make a good comic book.

Groucho, Chico and even, to an extent, Harpo do work rather well as comic book characters (certainly Dave Sim got a lot of mileage out of “casting” Groucho as Lord Julius in his Cerebus). But they all work in this comic because of allusion and association; one needs some knowledge of, and at least some degree of affection for, the Marx Brothers and their film comedies to buttress the comic. Giraffes doesn’t quite stand on its own, nor could it, given its nature.

Of course, at the risk of sounding nonsensical myself, a comic that is an adaptation of an idea for a film that could only be a graphic novel is itself a fascinating accomplishment. Frank might be selling this as the strangest movie never made, but, in addition to having never been made, it is and was a film unable to be made. And in an era where Hollywood seems to be stripmining comics for content, it can be refreshing to find a pop comic--hell, any pop comic--completely disinterested in auditioning for such attention. 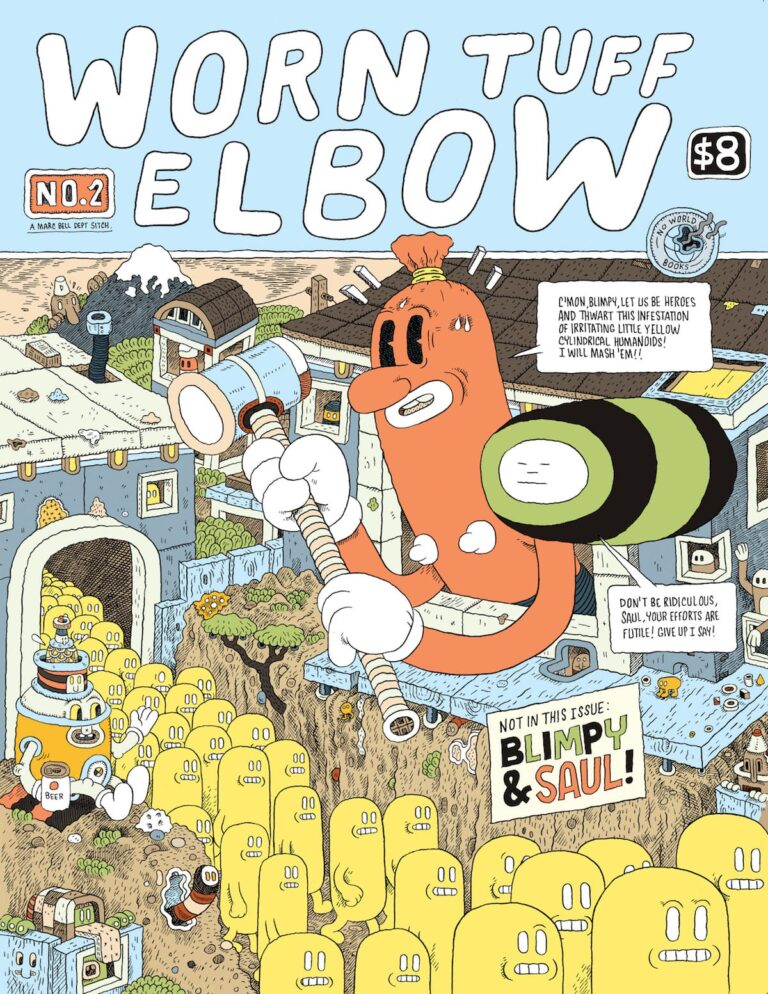 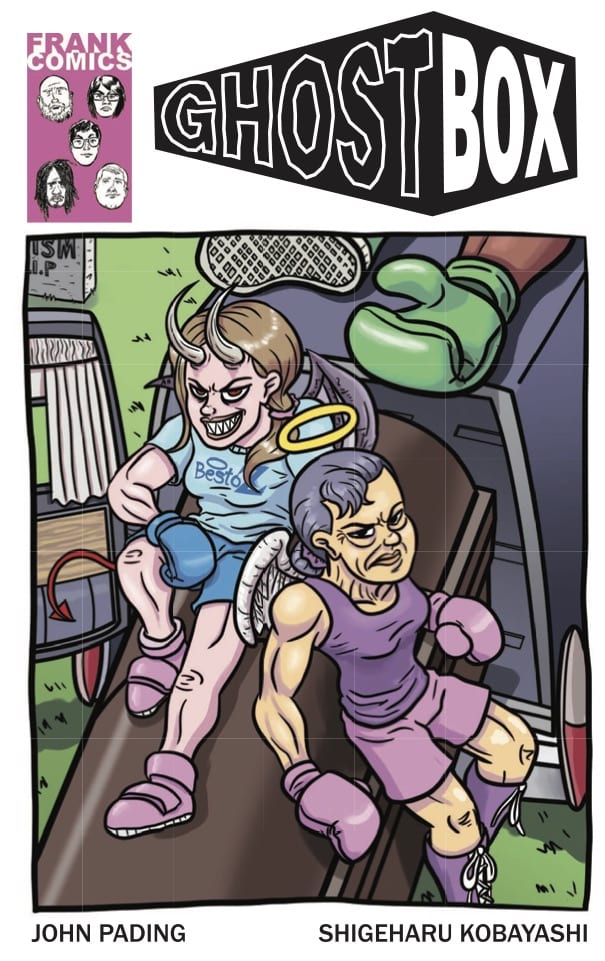