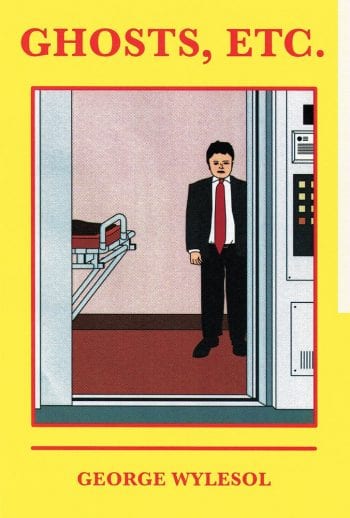 The title page of Ghosts, Etc., the first comics collection from Philadelphia artist George Wylesol, presents readers with not an illustration but a photograph. We see what looks like a deserted office space, largely gray, with barren desks and empty drawers. The image resembles a cheap color copy or a printout from an early home printer, and the quality of the reproduction is as important as its contents. Wylesol’s work keeps one eye on the past, contemplating abandoned spaces and repurposing discarded aesthetics. But these are unsentimental comics—more forensic than nostalgic, and fit to disturb.

The book’s first story, “Ghosts”, concerns a solitary figure who inhabits the large tunnel system beneath a hospital. He’s a ghostlike character of unspecified occupation who believes more literal ghosts might also occupy the tunnels. To the extent that this comic has a narrative thrust, it has the figure get lost, but “Ghosts” is more about voice and atmosphere. Part of the pleasure of reading the piece is seeing how Wylesol creates these things almost in spite of certain choices.

Wylesol’s narrator makes statements in first-person, telling readers of his loneliness and how he keeps his mind occupied. Many panels also imply we’re seeing things from the narrator’s point of view: head-on looks at doors, corridors, and objects. But the narrator’s statements are flat and declarative, presented in all lowercase with limited punctuation (“at night and on the weekends, its just me and the pipes and the music”), and the comic features clear-lined, geometric compositions of limited detail. Any intimacy between the reader and the narrator is theoretical, out of reach. Even the head-on POV panels are usually parts of a montage; they don’t create a sustained window into this character’s mind. Instead, we’re engaging with a voice that’s near-human, familiar but alien, in its affect.

Although there’s plenty of figurative ghostliness in the story, Wylesol’s treatment of (what may be) actual ghosts is also compellingly weird. They appear like pale red drapes, often caught creeping out of frame, and endowed with a power of movement that—given Wylesol’s restraint elsewhere—makes them the most alive thing on a given page. The reader gets to make a similar drift. Wylesol applies a low-quality printing aesthetic throughout “Ghosts”. The comic ostensibly uses flat colors, for instance, but minute dots appear within the flats, deliberate signs of low-grade reproduction. Along with the remoteness of the narration, this creates a sense of distance in the work—a reminder of the artifice of “Ghosts”. As this distance accumulates, reading the comic becomes like floating through a story rather than being dropped into one. 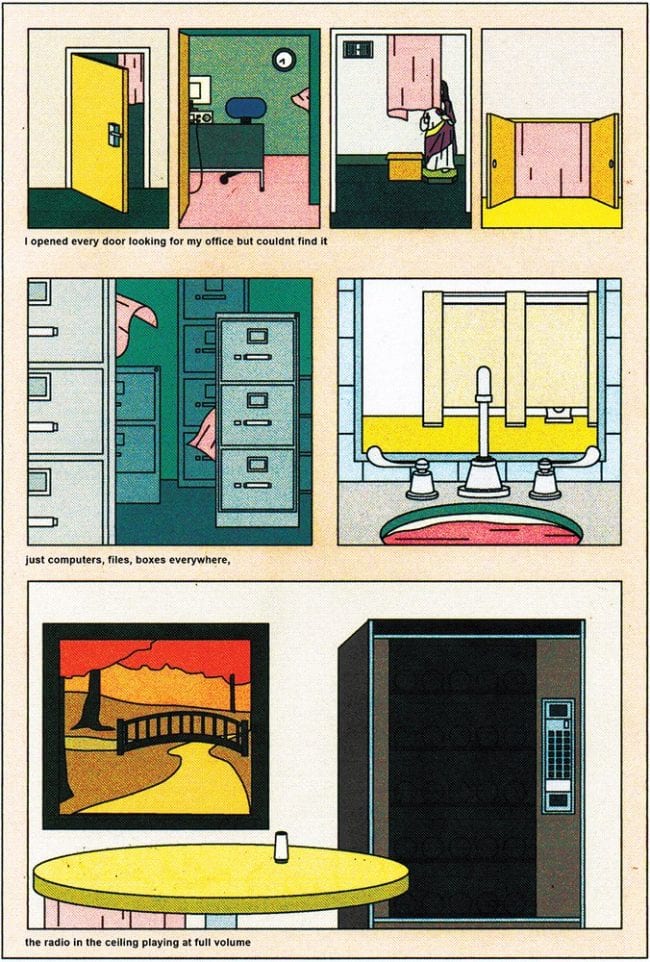 “Ghosts” would read well enough as a standalone work, but Wylesol’s single-page compositions, here as interstitial pieces, really benefit from the collection format. Between “Ghosts” and the second story, for instance, the book includes a washed-out photograph of roses, once again resembling the product of a cheap home printer, with the roses enlarged just enough to register as unnatural, discomforting. Within this photo is another, inset photo: the same image, smaller and rotated upside down. In a gallery setting, this might look pretty cheesy, the blunt uglification of some token of traditional beauty. And yet, in the context of Ghosts, Etc., it clicks: an accent, a brief provocation, in this larger continuum of works. 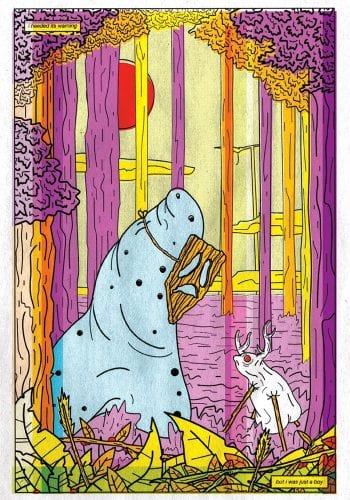 The next story, “The 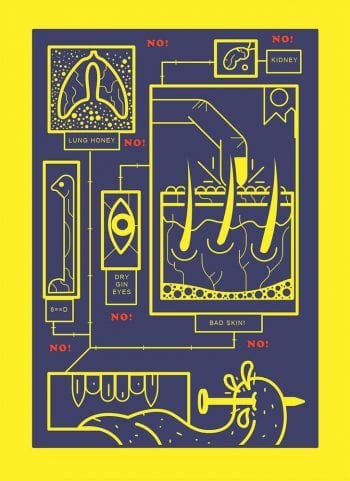 Rabbit,” also mines the possible effects of misprinting. “The Rabbit” is a DeForgeian comic that can withstand the comparison, a piece about the distorted inhabitants and harsh customs of a woodland area. Here, Wylesol uses a more aggressive color scheme, high on yellows, reds, and purples, and frequently applies stripes of off-tone color to his already abrasive compositions. The result resembles a botched four-color printing job, and in reminding readers of the work as a printed thing, it heightens the story’s sense of instability and disruption.

“Worthless,” the collection’s final comic, departs furthest from the approach of the title story. Here, Wylesol limits his palette to bold primary colors. The linework is thicker as well, and his compositions are at their most orderly, even diagrammatic. Panels recall old food labels, roadside markers, etc.—it’s the familiarity of signage, put to use on the book’s most hallucinatory piece.

In “Worthless,” a “bad kid” hanging outside a 7-Eleven is drawn into either a drug trip with a religious aura, a religious experience with a druggy aura, or something in between the two. While Wylesol’s pages are striking from the outset, they take on an ironic charge as a supernatural-seeming entity of indeterminate shape leads the kid toward this journey. These are moments of tension and temptation that would ordinarily take place in the shadows, but the boldness and loudness of Wylesol’s aesthetic create a real feeling of intrusion, of menace creeping into a common space.

As with “Ghosts,” the success of these left-field choices defines the piece. When a vision of “Elohim” appears, a “Walmart?” is visible in the background; a glimpse of Heaven includes the doors to a men’s room and a women’s room against floors with big, checkered tiles. The merging of the divine and the corporate, Heaven as the ultimate mundane place—these things have been done before, and they might have been groaners here, but Wylesol’s controlled line and his violent, saturated color choices make them feel strange once again. And when the bad kid’s vision takes a turn toward body horror, the pages may be short on viscera, but they contain a heft that make the horror feel inescapable. The result is counter-intuitive, and it’s common to all the pieces in Ghosts, Etc.: readers may be unsettled by Wylesol’s comics while delighting in their effects. 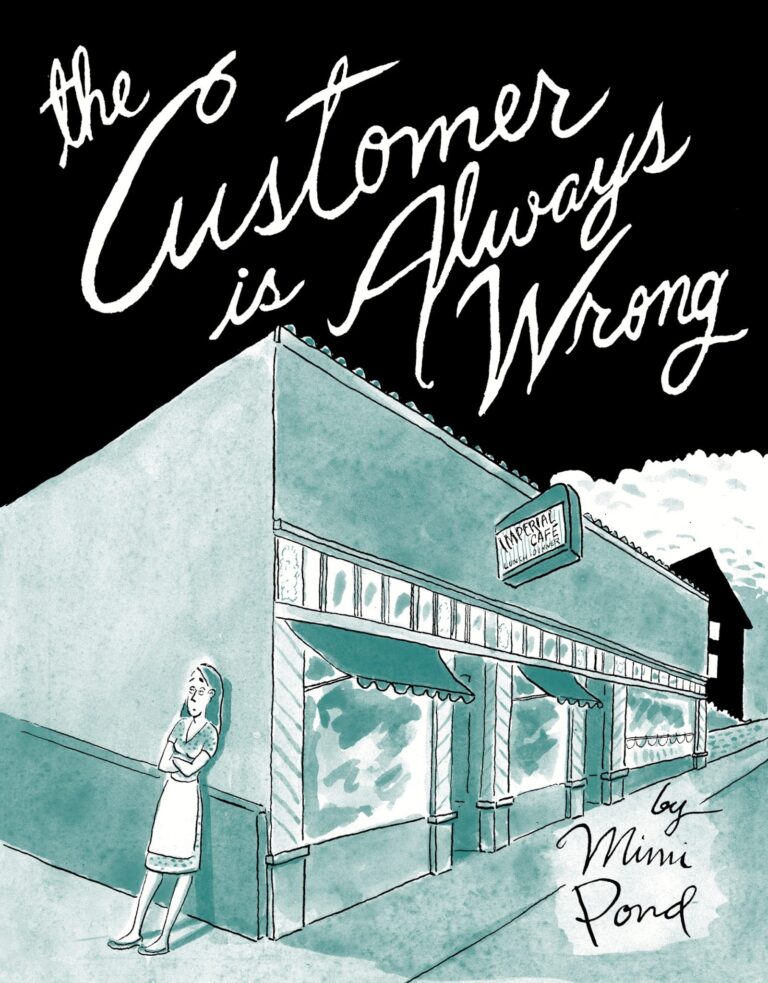 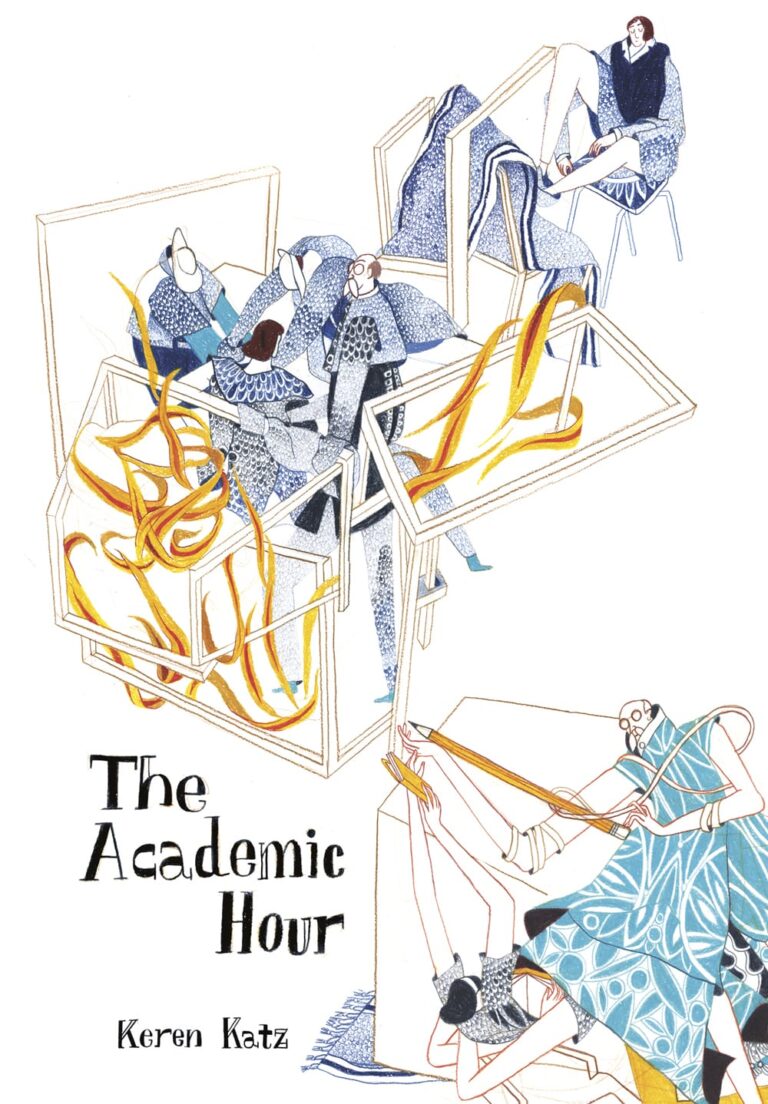