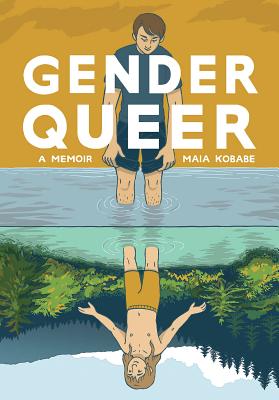 Something about being non-binary which you might not really get unless you are, in fact, also non-binary: there’s not just one way to be non-binary, but as many different ways to be non-binary as there are non-binary people. Other than sharing the general sensation of being outside the gender binary - hence the “non,” naturally - the ways in which we conceptualize, discuss, and present ourselves as non-binary are perforce bespoke. The precedents for our lives are those we find along the way: hidden, eccentric, and eclectic. There were no non-binary celebrities when I was a kid. Before just a few years ago I had never even heard of “non-binary.” I discovered the word not that long before I discovered it applied to me, in the grand scheme of things.

The sensation of catching up late seems fairly common, at least. Maia Kobabe’s Gender Queer approaches the subject with an eye towards the lay reader. The story begins with Kobabe’s childhood and advances methodically through eir life, showing step by step the ways in which the author discovered for eirself that conventional gender just wasn’t going to work. No one is born knowing this stuff, after all, especially given the cultural amnesia that hovers around all queer subjects. It makes sense for Kobabe to think that e might be a trans man, and many of the signs of eir’s early investigations point in that direction. But for various and sundry reasons its not quite right - close but no cigar, as they say. “My deepest emotional relationships have always been with women,” e says, “did that mean I was a lesbian? But my sexual fantasies involved two male partners. Was I a gay boy trapped in a girl’s body? The knowledge of a third option slept like a seed under the soil.”

Gender Queer serves multiple purposes. More than simply a memoir, the book is designed to explain the very concept of being non-binary, beginning with the author’s first memories of gender and ending with the discovery of Spivak pronouns (e, em, eir) and eir first steps towards getting the people around em to accept and understand said pronouns. While these ideas can seem imposing or strange in isolation and outside of context, biographical details are the best way to illustrate concepts that could otherwise seem extraordinarily dry. 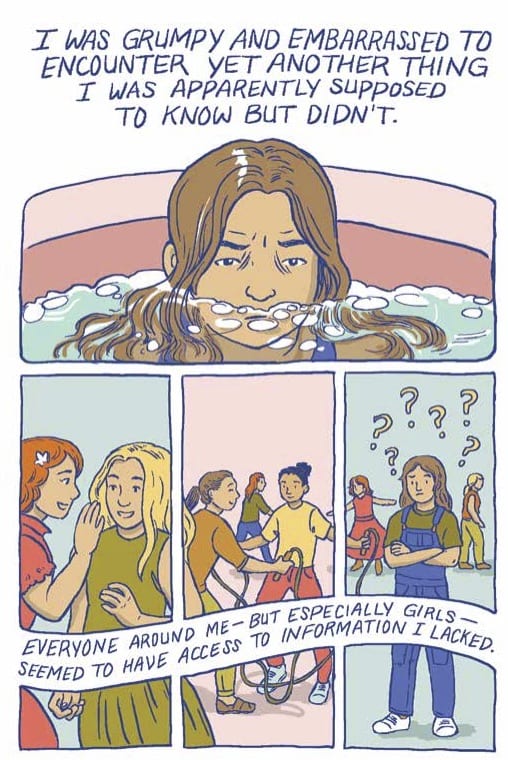 In an excerpt from a 2004 diary entry, written at age 15, Kobabe states that “I don’t want to be a girl. I don’t want to be a boy either. I just want to be myself.” If there exists anything resembling a universal creed for us non-binary folk, it might just be this: the idea that our innermost concept of self exists apart from expressions of of binary gender, which are often imposed coercively from without. “I just want to be myself” looks different for everyone, but for Kobabe it looks like embracing androgyny as both a personal philosophy and an aesthetic practice. The book ends with em bedecked in floral prints and flair, taking inspiration in presentation from the likes of flamboyant skater Johnny Weir or Alexander McQueen’s high couture, happy to present emself genuinely for the first time in eir life.

Non-binary people are rather new on the contemporary scene, so even if we’ve always been here in one respect we haven’t really had enough of a presence as a distinctive community in the modern world for stereotypes or generalizations to accrete. There are certainly old, very old mythic associations of androgyny and hypersexuality, but outside of Sandman that isn’t a trope one encounters all that often these days. (Back in the day, I mean way back, my people were worshipped as gods. It’s not like we expect that now but, hey, offerings are always appreciated.) Gender Queer actually lays out a bit of support for a pet theory of mine: the one thread that unites non-binary people, in all our disparate and iconoclastic glory, is that we all dress quite nicely. Regardless of how much money we have or our body types, we know how to put ourselves together real well. This may not seem like a big deal until you think about the fact - which Kobabe devotes the better part of a book to exploring and explaining in great detail - we have to construct our own identities for ourselves out of whatever we find lying around. If this whole gender thing really is just a big put on, why not have some fun with it, you know? Costumes should be fun. 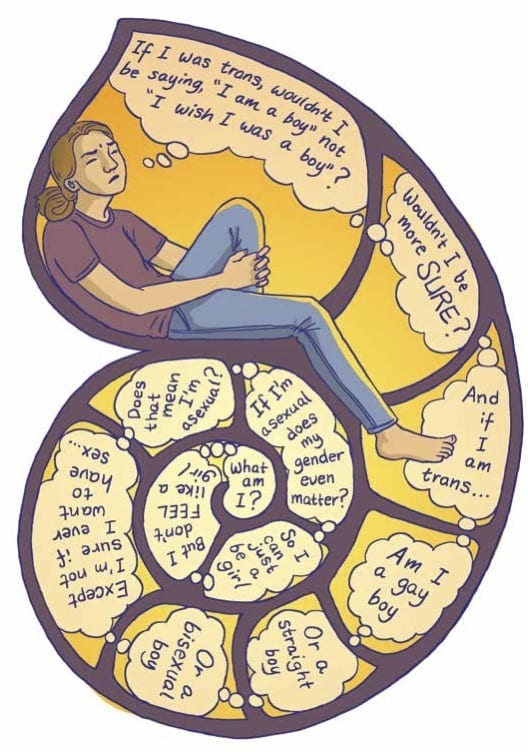 Kobabe’s art is very readable and, above all, accommodating. E lays out eir personal history with an enviable degree of candor. Telling the world all your most excruciating personal secrets while also making them aesthetically pleasing and readable certainly seems like it should be a simple enough task, but it’s harder than you might think. Part of the book details eir sexual history, as well as a series of terrifying and painful trips to the OBGYN, and even in the most sensitive areas Kobabe’s art and storytelling remains both personable and clear. Phoebe Kobabe’s colors are strong throughout, a palette of soft pastels and earth tones to communicate a range of emotions.

It would be great if the review could end right here and we could send you on your way with only a spiffy new comic recommendation to light your way. Alas, dear reader, I regret to inform you that the comics industry is still quite fucky. Lion Forge announced a merger with Oni Press last week as of this writing. People at both houses were summarily laid off, including the editor of the present volume, Andrea Colvin. Is the new company going to have any room for books like this? Will there be anyone left to care to shepherd queer rep to market? Marvel bought Malibu for the coloring department, after all. Gender Queer deserves better than to be lost in the wake of a business reshuffle. 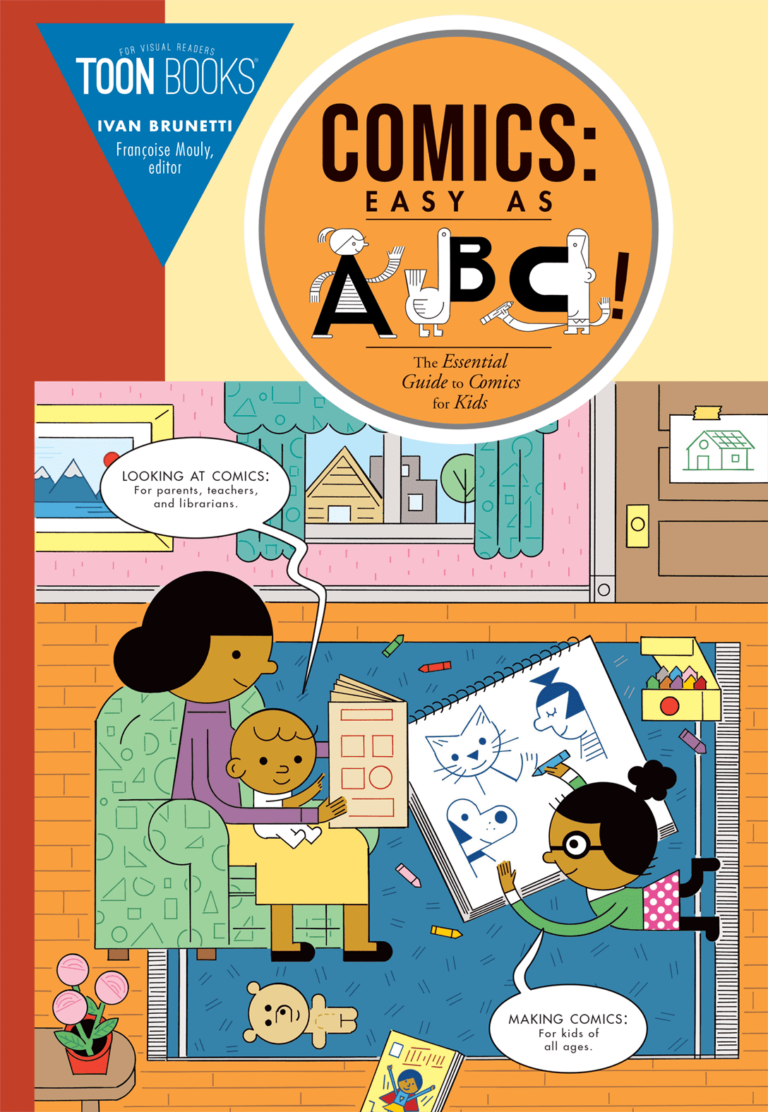 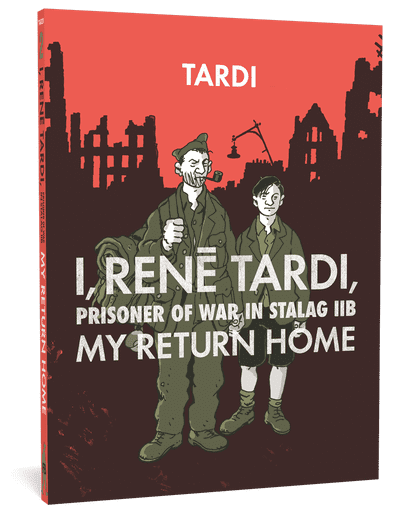