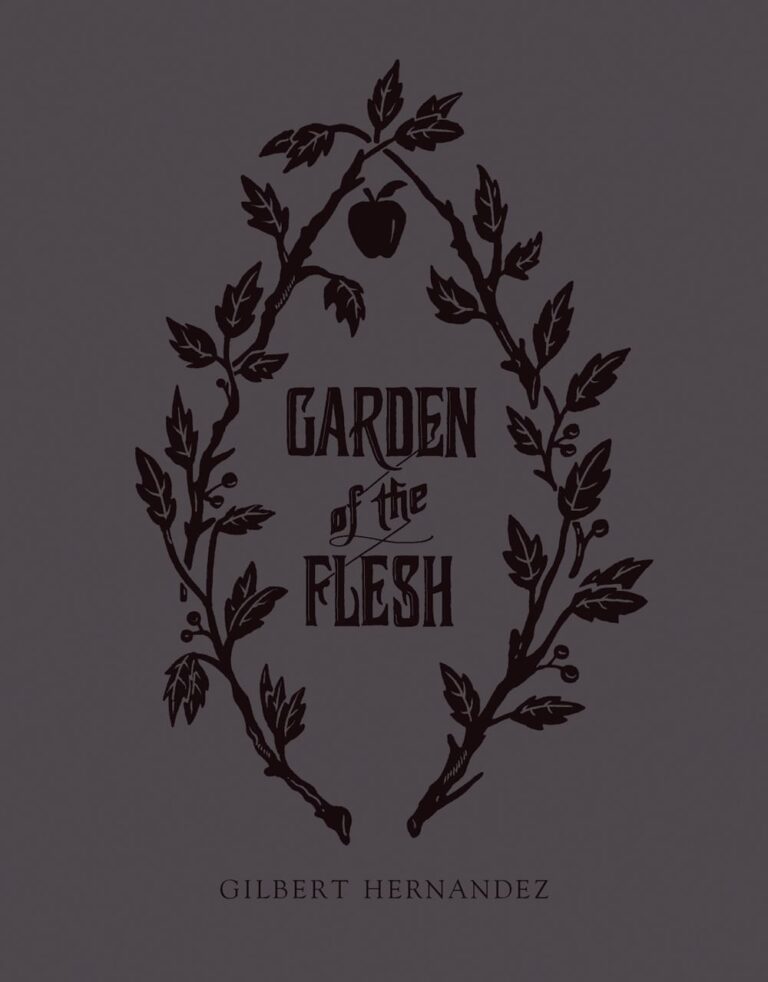 Garden of the Flesh

Can the Bible be made more interesting by the addition of huge amounts of explicit sex? Gilbert Hernandez’s Garden of the Flesh suggests that the answer is no. The first thing you notice is the beautiful package and design. The size of the book (6 x 4.75 inches), the lovely leatherette cover, the attractive debossed cover type—the title is surrounded by a beautiful garland of leaves—promises great things. The designer should be singled out for praise. His name is “J. Feeli Pecker.” Kudos Mr. Pecker!

It starts off promisingly enough. In the Garden of Eden, we see the primeval Earth disturbed, and on the 4th page Adam’s erect cock pierces through crust of the Earth as he is born into the world. The tumescent Adam announces his own existence and observes that he is alone, lacking “a companion like myself.” He lays on his back and jerks off, spewing splooge onto his ribcage, whence Eve is born. Regretfully, that’s the cleverest part of the book. 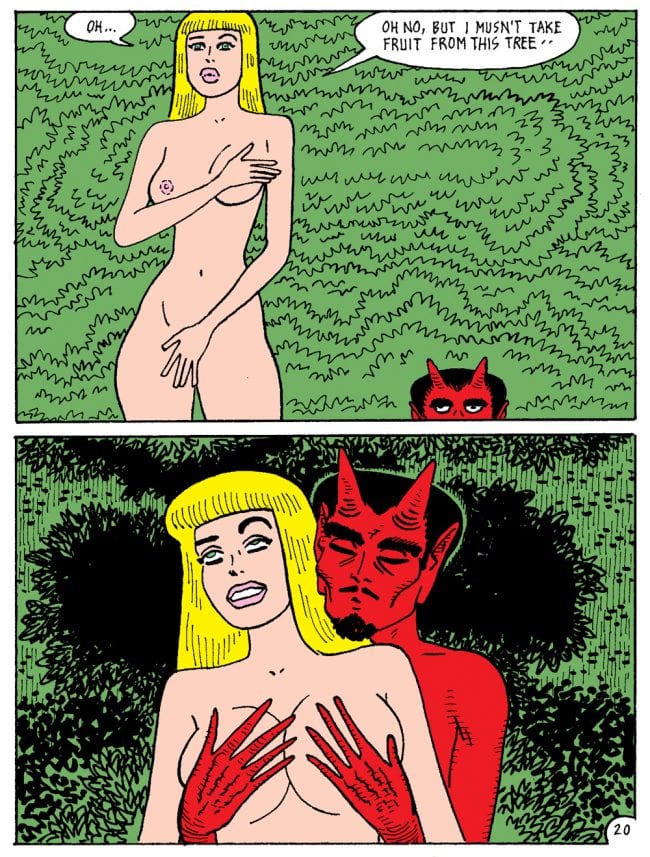 Hernandez lays off the fucking for a few pages to tell the story of Cain and Abel. Cain is marked with a Manson-like cross on his forehead for his infamous murder. Hernandez then depicts a scene not in the Bible—Cain meeting his wife. She is the first non-white character in the book (which was colored with a very simple palette by the versatile Mr. Pecker). Naturally they have sex. That’s all for Cain and whatshername. 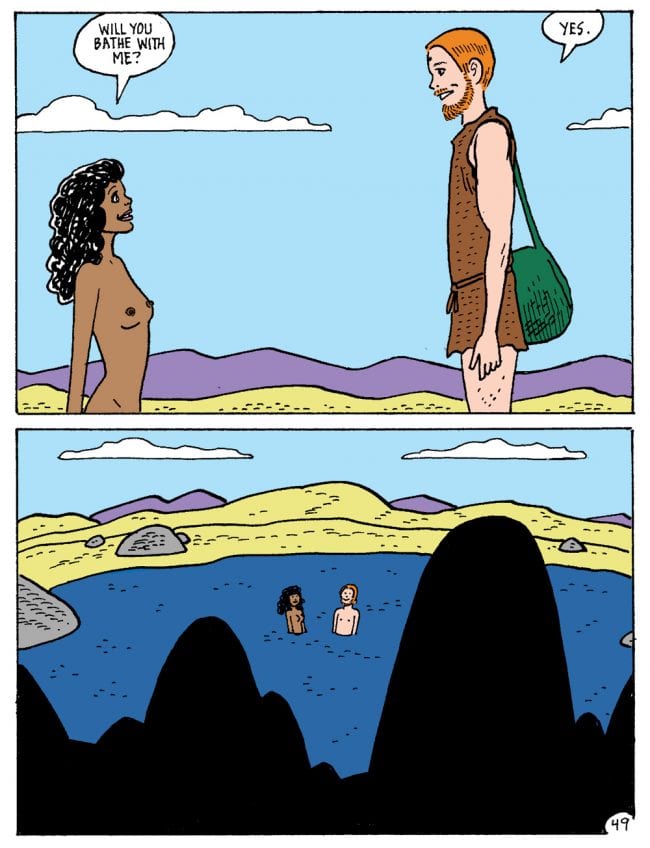 Of course, if you want a more accurate comic book version of the Bible, Robert Crumb drew Genesis, incorporating a text taken in part from the King James version and in part from Robert Alter’s 2004 translation. It consists of all 50 chapters of Genesis, while Garden of the Flesh ends at Chapter 9, after the flood has receded and, in the Bible, God instructs Noah and his sons to go forth and multiply. While Crumb’s art is a delight to behold, and he does get a little sex in there—enough to make it a little controversial, but no more than is in the Biblical text—Crumb’s Genesis is a tedious reading experience. Garden of the Flesh is just the opposite. At 191 panels, most of which (94 by my count) are filled with hard-core sex, it can be read in just a few minutes.

Next up is Noah. Hernandez starts off depicting Noah as a young man seeking a wife. Noah goes into a sinful Sodom-like town. He sees a veiled (but otherwise nude) dancer with enormous breasts (this is, after all, a Gilbert Hernandez comic). Noah fucks her and takes her from the city to be his wife. (Bible fans will recognize that this is a completely made-up chapter in Noah’s life.) 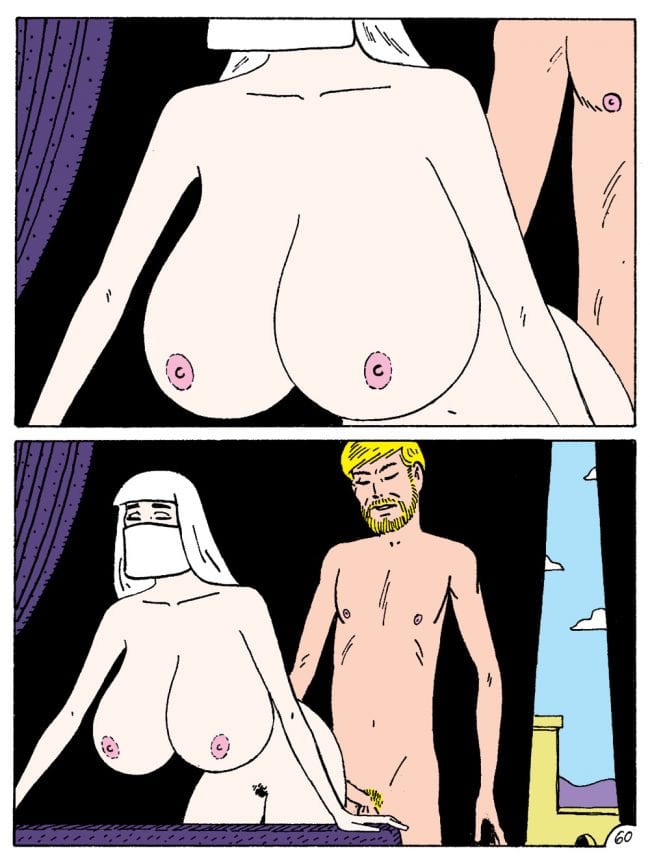 Noah’s unnamed wife never puts on clothes (or removes her veil). Then we see Noah’s sons (unnamed here, but Shem, Ham and Japheth in the actual Bible) fucking their various wives. A light shines down on Noah giving him a divine revelation. So he fucks Mrs. Noah and sitting nude with her, his jiz freshly splashed on her tits, he tells his children that they must build an ark.

Needless to say, the ark is a veritable love boat. As one of Noah’s sons is fucking his wife, the wife observes, “Wait, has the rain stopped?” The son, his cock buried halfway in his wife’s snatch, replies “Who cares!” The books ends with a sex scene between two previously unintroduced characters who observe that this is “Another chance” and “A new beginning.”

The art is quite strange. There are uniformly two panels on each page, and the figures are drawn very simply. There is almost no variation in line weight, and the positions are hackneyed. One always hilarious aspect of pornography is how characters always have to assume bizarre sexual positions so that we viewers can see everything. Hernandez follows that logic to an extreme—the figures are typically drawn in at least one panel in every sex scene with the male taking the female from behind but holding her body up so that we, the viewers, can see the penetration.  To accomplish this, the male character often has to lift the female’s leg up, as if showing us the front of her body. It’s the kind of sex act that someone who has never had sex might conceive of.

This is sex designed for male pornography viewers. Almost all of is penetrative, and as mentioned, it is always drawn so we readers can see the penis entering the vaginas or mouths of the women. The women are all hot and thin with pubic hair shaved landing-strip style. While people’s tastes in pornographic reading material are almost infinitely varied, Garden of the Flesh doesn’t challenge its male readers or make any apparent effort to appeal to female readers.

But we’ve certainly seen hardcore sex comics before from Gilbert Hernandez. He drew the Birdland comic book series in 1990 and 1991. Most recently he did two bizarre issues of Blubber. The difference between those earlier works and Garden of the Flesh is that the latter is so vanilla. The sex is all hetero, it’s all oral or vaginal (except for a couple of scenes of masturbation), it’s all between husband and wife, there is no group sex or polyamory—in short, it’s boring fucking and fucking boring. Birdland had a wide variety of sex including some interesting gender reversal; Blubber is even weirder, with sex acts between superheroes and various Pokemon-like monsters, with mutual dick-sucking as the default sex act. Garden of the Flesh feels like a regression is comparison.

The repetitive literalness of the sex in Garden of the Flesh makes me think of a combination of Benjamin Marra’s work crossed with hardcore pornography, where every encounter is an excuse for a sex scene. I think that’s a potentially interesting approach, but the payoff is not worth it in Garden of Flesh. 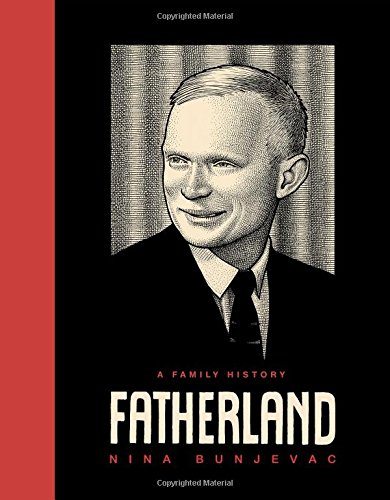 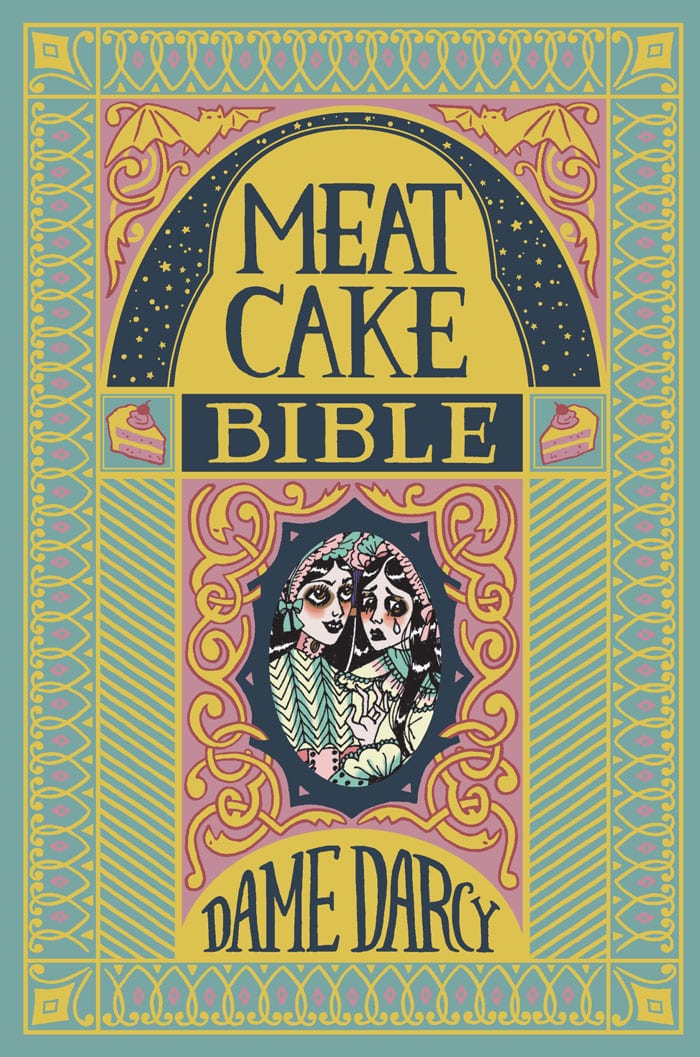