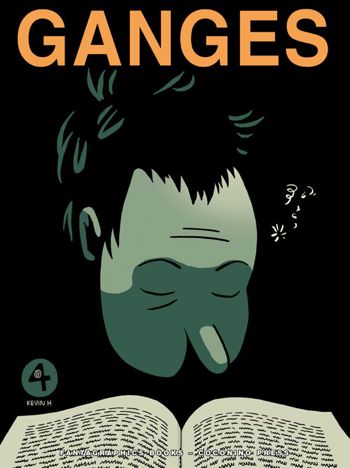 Ganges #4 is the Godfather Part II of comics about insomnia: the rare sequel that tops the already excellent original. Kevin Huizenga previously tackled his titular everyman Glenn Ganges' inability to fall asleep in issue #3, recasting his restless mind's wanderings as a series of action-packed explorations of environments -- water, drains, trees, the very bubbles and balloons of comics themselves -- that would do any member of Fort Thunder proud. Here he returns to the sleeplessness well, but this time around Glenn's mental avatar remains relatively stationary (though Glenn himself does plenty of wandering around the Ganges family manse), allowing Huizenga to instead burrow down deep into some of the most unpleasant sensations a bored and overtired brain is able to conjure. Folks, he does this so well.

Take the section in which Glenn tries to knock himself out by reading the densest, most impenetrable book he and his wife Wendy own, a "weird philosophy book" by one Jean-Luc Heilegra called Method and Being that his college roommate picked up during a cyberpunk phase in middle school and which he later recommended to Glenn expressly for its soporific effect. It almost goes without saying that Huizenga's illustration of this sequence is almost profligately inventive. He pushes the panels depicting the back story of how Glenn acquired the book off the bottom right corner of the page to indicate the position of their information on the periphery of Glenn's mind. He doubles the lingering cigarette-smoke fumes from the book's weathered pages as a representation of Glenn's cloudy-minded disorientation as he tries to plow through the jargon-laden prose. He plucks single words and images out of the text, then distorts the bodies of both Heilegra and Glenn à la Plastic Man, as the former tosses the concepts out into a grid-patterned ether and the latter attempts to piece them together in a way that makes sense. But the real tour de force here is verbal, not visual. So impressive is Huizenga's simulation of heady, possibly poorly translated philosophical gobbledygook that I'm reproducing it below in its entirety:

Now we know that we can only counter the nothing with a proper thinking of nothing. The elaboration of the question of nothing must make possible the answer with reasonable clarity. But where shall we seek the nothing? The temporality that emerges from our analysis turns at the foundation of spatiality. Proximity and mundanity come into a retroverted, though dialogic, relation, which constitutes the vorauspringt of the ecstatic unity of the future. The here has no place. It is at each instant here or there and now, because here is now and re-created and re-cited as such. What is cited appears, but the "hear" and now, into which it enters, does not appear to us. It is ex-cited and succumbs to the subsuming into being that fully conjoins, or not at all. Without "and" there is no space and time. The "and" is not "or" nor "in," as in "in-between," nor the space(s) in-between the words (the nothing), which we could say are also loci on the horizonless grid. But we should now speak of this horizon. As the facticity of this horizon brackets disclosedness, it spirals in on time/space, so the quasi-immanence of the grid can in a sense be thought of as a network of "bullseyes." How is the bullseye to be distinguished from the spiral? Dialogically? The spiral of proximity is at once the accommodation of the dialectic; here is always on it sway to becom ing there. We are speaking of the hermeneutical but also speaking now of mundanity, which is everydayness. Remember, the interfusion of here and now prevailing here is, moreover, controlled beforehand by the negation of what is not-gridded or networked. What is on the grid is coordinated, but it is also em-boxed. Locations are where we come under the sway of everydayness in the form of the spiral, the network, and the bullseye.

Kenneth Smith, call your lawyer! The sequence ends with the book's text transmogrified into an inward spiral of scribbled gibberish, with only the occasional legible word or phrase ("of the," "kill," "we may see," "interpret," "which is to say") emerging intact from the vortext. It's been eleven years and counting since I had to crack open a theory textbook, but in the space of that last panel the experience came flooding back to me like I was sitting on my futon with U.N.K.L.E. on my boombox and a highlighter in my hand that very moment.

The rest of the comic maintains that section's dizzying blend of writing and drawing power, with alarmingly familiar sensations reproduced, and stop-and-marvel visual effects created, on nearly every page. In the former category there's a gorgeous four-panel sequence in which Glenn's options for how to spend his sleepless night besides just lying there ("Grocery shopping (24 hours)," "Start that blog," "Play video games," etc.) are represented as floating books he might choose to pull off the shelf -- but as his dozing mind drifts off into incoherence and dream-logic, the "titles" of the "books" get odder and odder ("The Curse of the Red Moon Junction Mystery," "The Mirror," "The Itchy Ear (Don't Move)," "The Mask of Satan") until Glenn's suddenly envisioning himself in some weird Hardy Boys mystery that has nothing to do with getting out of bed and backing up his digital photos or what have you. If you've ever been startled out of half-sleep prior to really shutting down for the night and been able to briefly retain the weird-ass shit your brain was coming up with at the caboose end of a train of thought that began with you thinking about the meeting you have at work the next morning, you'll recognize the sensation and applaud Huizenga's ingenuity in depicting it.

Elsewhere he's equally adept at conveying the grim realization that you'll never have time to read all the books in your library, the dots and squiggles that swim before your eyes in the darkness, the moment when your cat leaps from your arms after you've dragged him through the door from an unplanned outdoor excursion, the eeriness of an unrecognized car parking in front of your house in the wee hours, discovering a work of art made by a loved one who has not shared it with you yet... It's a powerhouse performance, and from the endpages -- which show illegible snippets of the events immediately before and after the comic's narravite proper, so convincingly drawn as though they're on pages fanned away from the reader that it's literally disorienting -- on down, it's a marvel of giving mental phenomena a tactile, physical impact. I actually found myself thanking no one in particular that, unlike Glenn, I don't lie on my back to sleep and don't use reading as a sleeping aid, because if I did, Huizenga's elaborate depictions of same would likely have been too intensely recognizable to bear.

My one objection is that Glenn's late-night reveries are curiously sexless. It's a shame, because you have to figure that Huizenga would be as proficient at nailing the mental landscape of fantasy and arousal as he is at, you know, everything else. The handful of glimpses into that world he does afford us are tantalizing and promising. There's a one-panel image of Wendy sitting at the computer earlier that week, her back to us, wearing only a bra, that's a minor stunner, capturing the casual intimacy of cohabitation. And relatively early on in the comic, Glenn's mind coughs up a couple of curious elisions. As he thinks of what he might do instead of just lying there trying to sleep, the list he produces contains the crudely censored statement "[BLANK] and then [BLANK] your [BLANK]," the apparently offending words hidden under black bars. I'm not sure exactly what might be going on underneath them, but I suppose I could guess. On the next page, Glenn visualizes his younger self watching John Cusack comedies on a couch with an unnamed girl. Though the date he tentatively affixes to the memory ("Must have been—what, 1987, 1988?") would seem to pre-date sexuality a bit if Glenn really is the stand-in for the 34-year-old Huizenga he seems to be, some kind of crush appears to be in play, intensely remembered: "I can't believe she just... Can't believe I was so..." One day I'd love to see Huizenga flesh out (ahem) the erotic impulse with the same accuracy and imagination he's used to depict the experience of reading an impenetrable book, catching a jail-broken cat, wandering around a darkened house at night, and so on. That he hasn't yet done so is a disappointment, yes, but it also serves as a reminder that there are areas of the human mind left for him to explore, that there are things we haven't yet seen him attempt. You could lie in bed and imagine those possibilities for many a delightfully sleepless night. 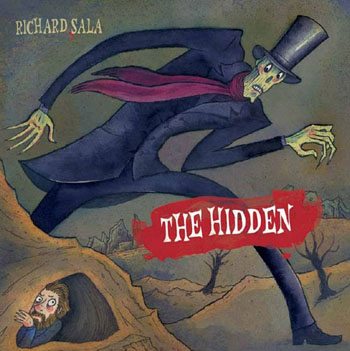 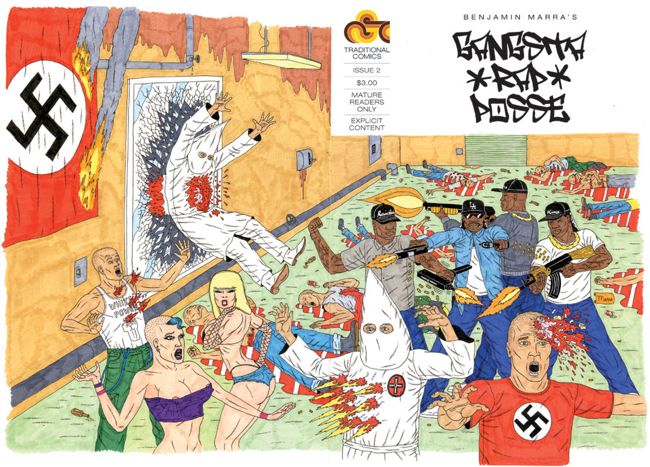