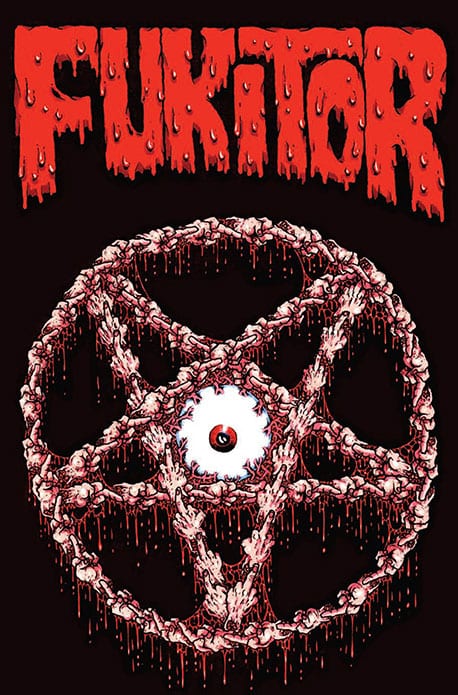 Fukitor is a collection of rebellious gestures performed on repeat. The book, a bellwether title for Fantagraphics’ F.U. Press imprint, brings together entries from cartoonist Jason Karns’s series of the same name. The individual stories are genre pastiches of about five-to-ten pages in length. They typically feature murderous ghouls or hyperviolent men of action or both. They are designed to accommodate as many instances of bloodshed and rape as possible. Much of the advance buzz surrounding Fukitor took the form of a debate concerning Karns’s depictions of sexual violence and his use of ethnic caricature. Some aspects of this conversation are larger than Fukitor, and if the book represents failures of empathy within the comics community, people besides Karns share responsibility for those lapses. But Karns alone is responsible for his book’s failures of imagination.

Karns’s cartooning sometimes resembles that of Evan Dorkin, especially with respect to his figure drawing. His heroes sport square-ish heads and clenched teeth, and most men and women in his comics move about on rubbery limbs. The scenes in which Karns places these figures aspire to sensory overload. Fukitor’s action sequences often include multiple dismemberments on the same page, and Karns renders even tombs and dingy laboratories with a bright pallet. The coloring choices encourage readers to take in everything—including Karns’s creature designs, one of Fukitor’s defining elements. One story features apelike, helmeted, leathery-winged aliens; another features a massive eye with vein-y, teeth-baring tendrils. These monsters are striking composite creations, evoking heavy-metal album art and the pop-horror iconography of Halloween window decals in equal measure. They are good fun to look at. It’s the choice to build stories around the monsters that reveals Karns’s limitations as an artist.

“Zombie Gorebath” is one of the collection’s first stories and one of many to take some cues from old EC comics. (A character exhibits hubris, encounters the supernatural, receives a violent comeuppance, etc.) During a prelude to the gorebath, a white researcher on a pacific island anally rapes a brown villager and then shoots the villager in the head. (Karns depicts the villager with a bone in his nose, a bit of signifying that defies readers to wonder whether the choice is self-consciously lazy or traditionally lazy.) One page later, the zombified native returns to bite out the white person’s crotch. This sequence lacks the conviction of even a revenge fantasy—Karns approaches both moments with the same sort of leer. 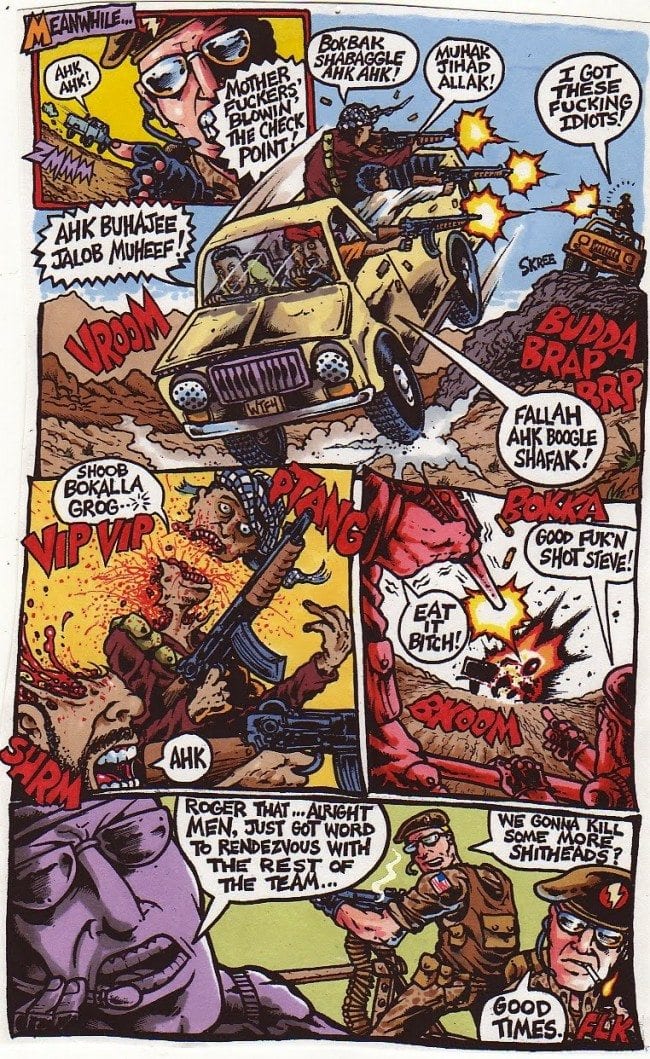 From “Zombie Gorebath” alone, a reader might wonder if Karns simply wants to offend. But “Special Forces Attack Squad: Operation Cockblock!” story reads (superficially) as an attempt to do something more complex. The comic follows a mostly-white combat team as it plows through coded-Islamic militants who speak in phrases like “Muhak jihad allak!” and “Doobla madooba blaggle!” The opening page of this story suggests a skewering of all parties—the Ss in “Special Forces” recall the SS insignia, and the G.I. Joe types are goons in their own right. A generous reader might even suggest the comic critiques certain ways of seeing Middle Eastern peoples. But subsequent spreads mostly celebrate the over-the-top slaughter of sublingual ethnic grotesques.

Intentionality becomes a consideration while reading comics like this. Here are two ways to consider “Operation Cockblock!”: 1) Karns uses satire as a pretext to include content that’s upsetting by design; 2) Karns’s ambitions as a satirist outstretch his gift for satire to such a degree that the story is a near-total failure. Not all art has a social intent, and not all art is best viewed in these terms, but we can certainly judge ostensible social comment by its follow-through. Fukitor manages little with respect to race except the visual parroting of hateful tropes.

It’s possible Karns doesn’t consider the reactions of readers while drafting his work. Not likely, but possible. If he does consider reactions, we can posit that shock is not merely expected but desired. So criticizing Fukitor because of its harsh content feels uncomfortably like playing a game that Karns has arranged. But Fukitor can also be critiqued on the grounds of its eventual boringness. By the end, viscera fall with plodding monotony.

The stories throughout Fukitor stick closely to the same tone and cartooning sensibility. Comics about monsters end with the disemboweling of humans; comics about cops or soldiers end with the disemboweling of bad guys. This kind of relentlessness can be compelling, but more so in works that have a brighter spark of invention. The stories in Fukitor don’t merely riff on ’80s action movies or Mars Attacks! cards; from the appropriated Team America irony of “Special Forces Attack Squad” to an alien middle-finger that Karns took from Bad Taste to a Nazis-as-zombies piece that could’ve come from a dozen existing sources, these comics borrow conspicuously from earlier works.

Glimpses of a sharper approach are visible in a couple of Fukitor pieces. In fact, Karns’s work is strongest in the scenes in which he stretches his formulas. “Butt-Raping Bat-Apes from Pluto” includes amusing moments of petty squabbling between astronauts before its descent into mayhem. And “Demon Dicks!” explains away the survival of its protagonist with mention of a robot decoy—an entertaining usage of the loose rules these stories have in place. But the only novel thing about most pieces in Fukitor is the constant shoehorning of sexual violence, Karns’s apparent substitute for new ideas. 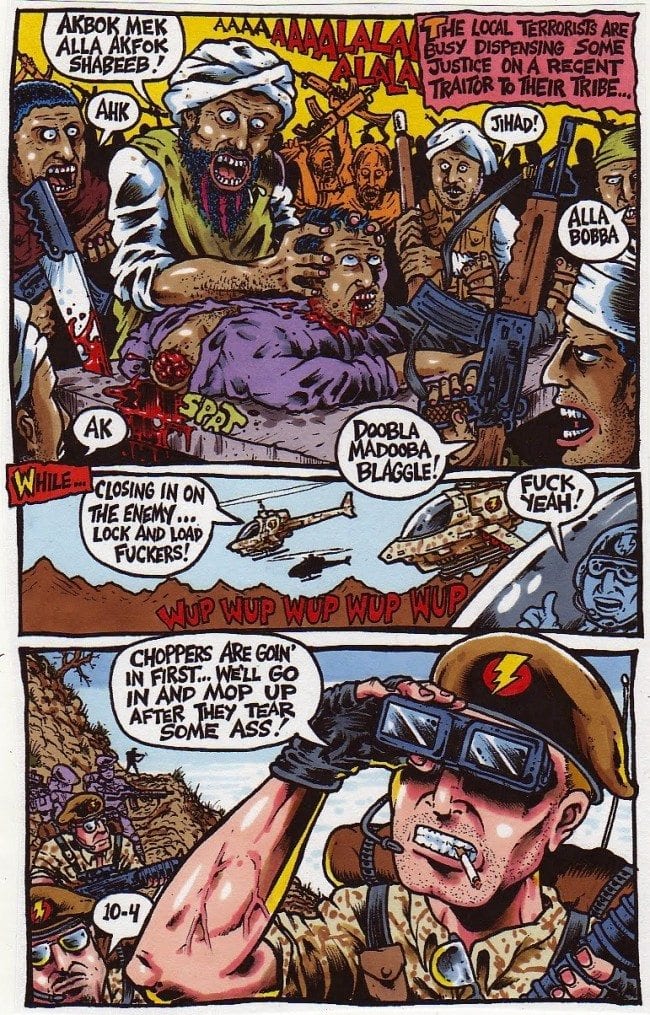 While ethnic caricature exists in Fukitor as a series of isolated incidents, Karns’s depictions of rape form something like a through-line. In story after story, women are stripped and assaulted by ghouls of all kinds. Karns stages these scenes competently, giving his pages a manic quality while keeping the action legible. Who cares? This is work of privileged creepiness—a cheap reliance on sexual violence as an X-factor within a series of overfamiliar comics. The fundamental ugliness here clouds whatever issues or ironies Karns has intended to explore. (And that too is a generous reading.)

Again, provocation is probably half the point in Fukitor. We can picture Karns drafting his stories in defiance of some straw-man censor. But Fukitor didn’t have to clear the Comics Code Authority. Actual underground comics already did whatever heavy lifting a book like Fukitor would theoretically do. If something could validate Karns’s decision to so gleefully depict sexual abuse, we don’t find it inside the book.

Excess isn’t always easy—it’s probably exhausting sometimes—but it requires a drive separate from talent or good ideas. Fukitor has excess in abundance and little else to distinguish it. This is a work that peddles exercises in genre secondhand. This is a work that, convinced it’s a rebel, behaves like a bully. 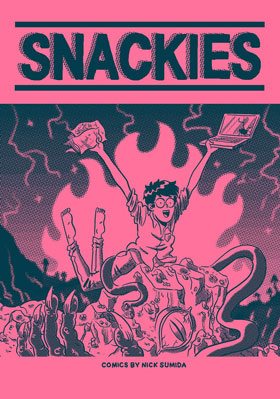 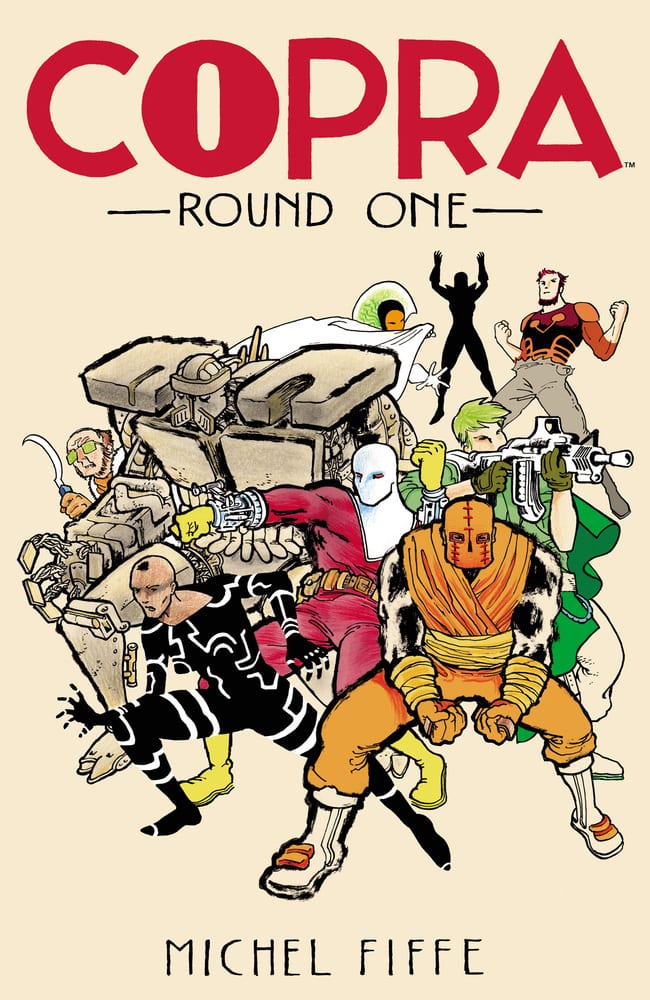