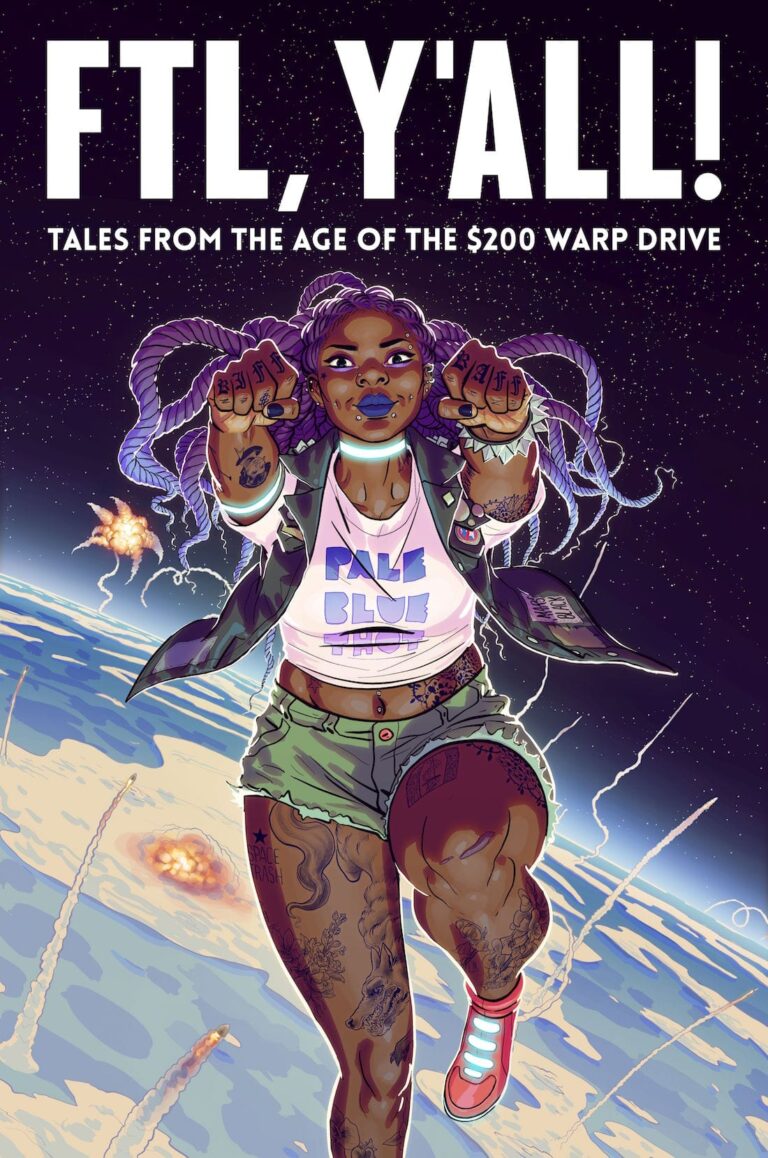 “It’s a weird time in the history of the republic” is a phrase I keep writing because dammit it just keeps being true. It’s a claustrophobic time. Who wouldn’t love the opportunity to get out of the old neighborhood? That’s the animating spirit behind FTL, Y’ALL: Tales from the Age of the $200 Warp Drive, a new anthology from Iron Circus Comics. The premise is right there in the title. Guess inflation isn’t quite so bad.

Said premise sets a fairly banal assumption on its head. It makes sense to audiences, from generations of movies and books and video games, that when humanity reaches the stars it’ll only be in giant gleaming ships that each probably cost the gross domestic product of medium-sized industrialized nations. The Federation is beyond money, and that’s a very good thing if you think about the cost overruns that building a ship like the Enterprise must entail. Star Trek is a powerful fantasy precisely because of the insistence that access to the stars will be an egalitarian project supported by an egalitarian society. FTL, Y’ALL assumes the former without the latter.

In practice that means that one of the volume’s immediate pleasures is seeing how different artists respond to the visual challenge of designing the Enterprise on a Walking Dead budget. CB Webb literally has a kid climb into a clothes dryer and blast off, cramped accommodations to be sure but one that neatly illustrates the book’s premise. A refitted subway car with a glass biodome stuck to its ass (courtesy of Nathanial Wilson) is probably my favorite. If given the opportunity a lot of people in 2018 probably would take the certain shot of dying somewhere other than Earth, even jammed into a home appliance, to the certainty of living on a pretty shitty Earth (cf. the whole “It’s a weird time in the history of the republic” thing).

It’s that context that gives the best stories in FTL, Y’ALL their bite. These are about escape as much as exploration. The stories here aren’t set in any kind of shared universe, so some of the stories are set against grimmer backgrounds than others. Mulele Jarvis’ “Cabbage Island” is a good example: the woman who builds a tiny ship to Alpha Centauri is racing to stay one step ahead of both a fascist police state and ecological devastation. “Things could get better,” someone says, to which our heroine replies, “No, they won’t.”

There’s a lot of that kind of darkness seeping up from the floorboards. A few, like Kay Rossbach’s “M.S.P.I.P.S.P.,” take place in a kinder context where the $200 price tag renders interplanetary travel about as eventful as a weekend commute on Southwest. One of the volume’s standouts is Christine William and M. Kennedy’s “Last Exit,” where breaking free from the stultifying claustrophobia of life on earth just means falling into instant debt servitude on a stultifyingly claustrophobic space station. Most of the stories don’t presume anything so formal as the kind of intergalactic governance necessary to support currency exchange, however. 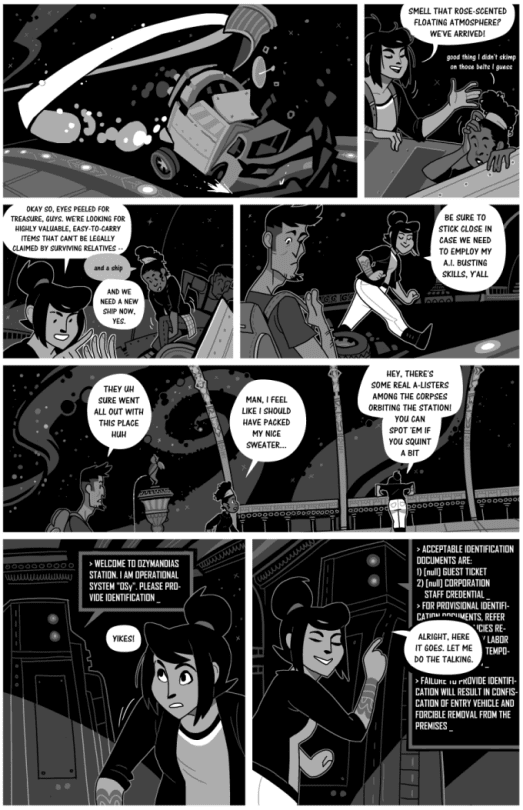 What is most interesting about these stories is the way that the prompt explicitly frames the premise as empowering through expanding access. What that means in practice is not just that there are different kinds of people going to space, including all conceivable marginalized groups, but that they’re not in space for any reasons but their own. As fun as Star Trek looks you’re still essentially a space narc, after all. This was actually the plot of the last Star Wars spin-off, Solo: space travel is great and all but if the only way you have of getting off your planet is joining the space marines to blow shit up at the behest of rich dudes, that seems very much an instance of putting the “same shit” in a “different bag.” FTL, Y’ALL shows people actually living their lives out in the wild universe without having to place these ostensible fantasies in a context that is, in most popular sci-fi, by default imperialistic and therefore ineradicably dystopian. 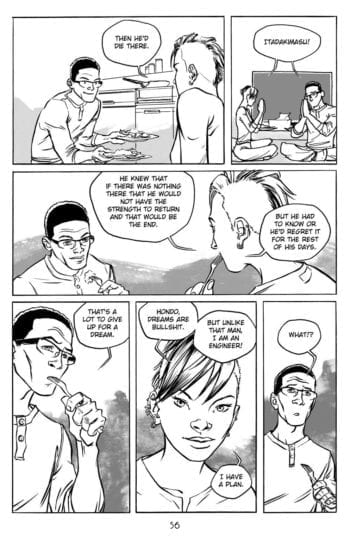 The problem with reviewing books like this is that anthologies filled with up-and-comers swinging for the fences are hit or miss, almost by design. It’s difficult to wholeheartedly recommend a book on the basis that this is promising journeyman material from a number of people of whom you have almost certainly never heard before, but that’s pretty much the size of it. By that same token, however, there is good work here from a number of cartoonists of whom I had never before heard. Books like this exist to showcase new talent, and there’s certainly enough here, but it’s also almost certain that the folks who catch your eye may leave me cold.

Case in point, “I Want to be Alone” by Seren Krakens is probably my favorite story in the book. It looks anxious like Gerald Scarfe trapped in an elevator with Mickey Zacchilli for eighteen hours. On the other side of the spectrum you find Jonathan Dalton’s “Words From the Dead,” an excellent (if more buttoned down) story about crowdsourced archeologists looking for life among ruins. Dalton’s clean lines and deliberate pacing couldn’t be further apart from Krakens’ expressionistic eruptions of ink, but they’re both standout features from an anthology that, on balance, hits more than it misses. Books like this live or die strictly on the aesthetics of the editor, and the fact that two such disparate features can coexist so comfortably side-by-side is ultimately a testament to the editor, Amanda Lafrenais. 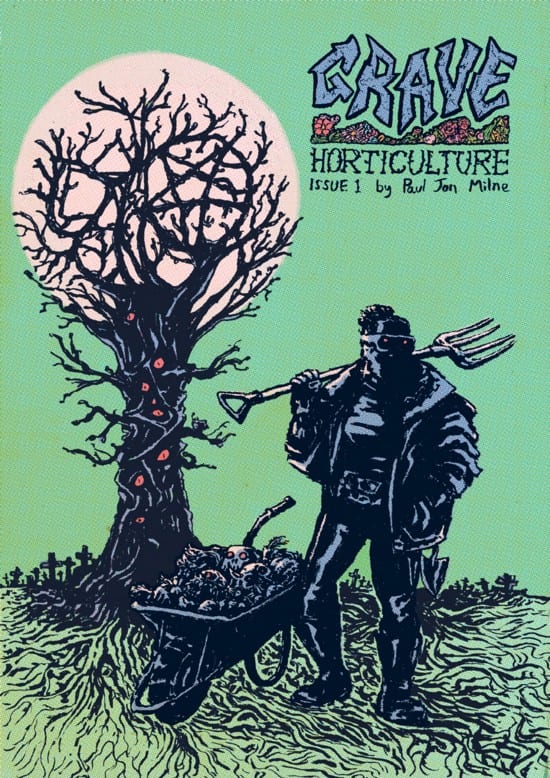 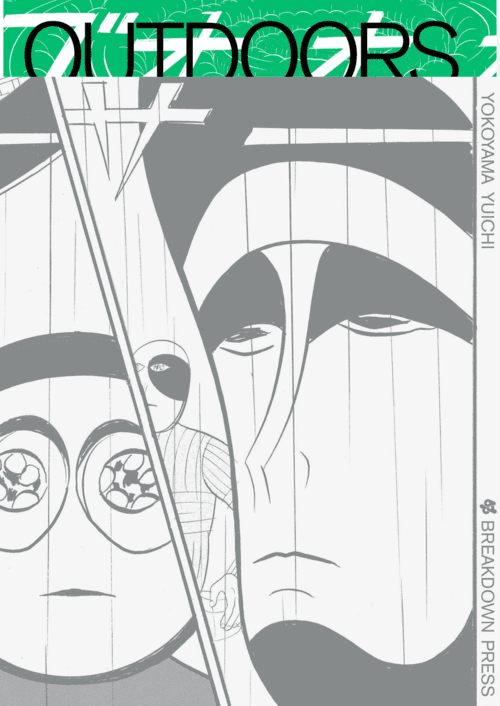