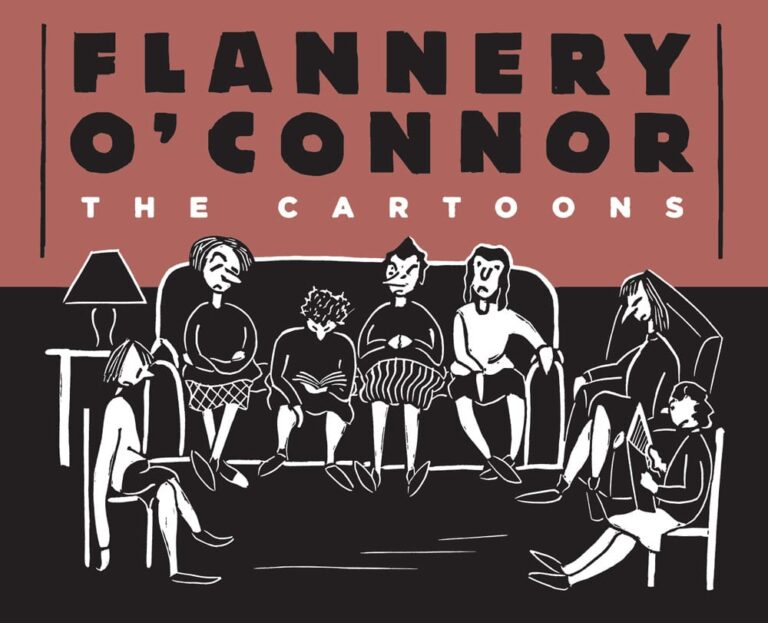 Mary Flannery O’Connor was born in Savannah, Georgia, on March 25, 1925. She grew up there and in Milledgeville, a farming town of 6000, a shy, socially awkward, devout Catholic — of a self-described "thirteenth century" persuasion — in thick glasses and corrective shoes. Though bright and creative, she socialized more with barnyard fowl than other children. When she was 13, her beloved "dreamer" father, a failed realtor, was diagnosed with lupus, from which he died three years later. O’Connor lived with her more practical, more problematic mother until graduating Georgia State College for Women in 1945. She left home for the comparative freedom of Iowa State University, in whose Writers’ Workshop she blossomed; but in 1950, after brief residencies in New York and Connecticut, she was herself felled by lupus. She returned to her mother’s farm, which held no telephone (until 1956) or television (until 1961), but contained much disapproval of and discomfort with her fiction. There O’Connor lived until her death, August 3, 1964. While she had acquired several adored and adoring friends of both sexes, with whom to comfortably discuss everything from literature to cattle auctions to theology, the only instance of physical intimacy recounted by her biographer Brad Gooch is a kiss a decade before she passed with a 27-year-old Danish textbook salesman.

Despite her short-changed life and less-than-20-year career, O’Connor became one of the great American writers of the 20th century. Her two novels and 31 short stories mingled piercing wit and jarring violence through an impassioned, bracing intelligence to achieve pure and original literature. She added to the citizenry of the Southern Gothic, primarily populated by Faulkner and Caldwell, a sui generis cadre of the goofy, the haunted, the sadistic, and the divine. She rendered the blackest of comedies before anyone who had not sipped espresso with Andre Breton had heard the term. While neither madman nor murderer, teenage seductress or backwoods boob, she indelibly achieved them all. If you have not read her novel Wise Blood or story "A Good Man is Hard to Find" or essay "The Fiction Writer & His Country", do so now. I will be here when you return.

I have read all O’Connor’s fiction, her collected letters, and a volume of her assorted prose; but I had not known she drew until I encountered the Fantagraphics collection, Flannery O’Connor: The Cartoons. It is a handsome effort, wider than it is tall, two cartoons to each right-hand page, an olive green, blank sheet facing each spread soothingly across the spine. But learning from Gooch that they accrued while O’Connor was in high school and college, I was curious why anyone but an already confirmed O’Connor fanatic would want to view them. 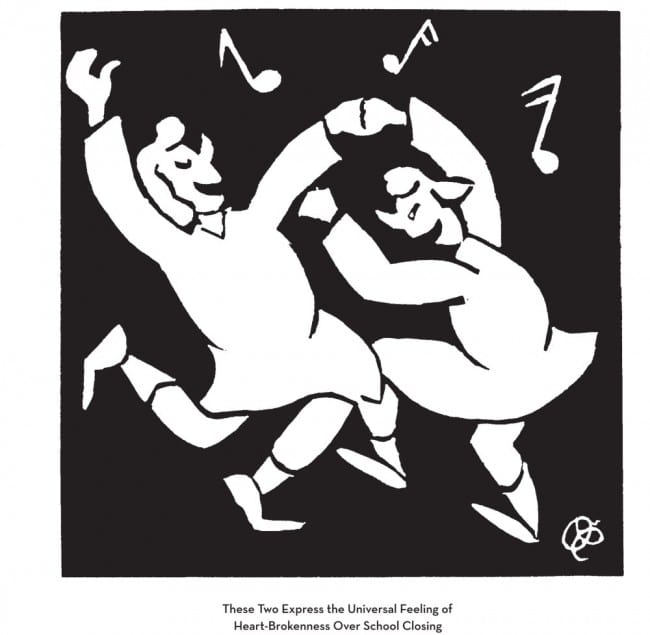 Certainly, it is not for the quality of art. In a two-page introduction, the printmaker and illustrator Barry Moser advises that they are linoleum cuts, which is among the "simplest, easiest and crudest of all the printmaking media." Even within this unchallenging genre, Moser considers O’Connor’s efforts "naive," "coarse," "rudimentary," "unpolished," and seemingly "cut in ... raw haste." (She may, he makes it appear, have spent less time on the lot than she did, when she was five, teaching a chicken to walk backwards.) Moser does compliment O’Connor’s "natural sense of composition" and "innate comprehension of gesture," but, in the context of his complaints, this sounds to me like an NBA scout reporting a prospect can run and jump but lacks knowledge of boxing-out or the pick’n’roll.

In an afterword, Kelly Gerald, the book’s editor, ties its values to the links between the cartoons and O’Connor’s later writing. Both efforts, Kelly notes, benefit from a good eye and solid work habits. (True that – but this is not saying a great deal since the same could be said of architects, neurosurgeons, and home plate umpires.) In both mediums, Kelly goes on, O’Connor relies upon "one or two quirky features to make characters humorous," as if a pointed nose or misshapen eye was equivalent in originality and power to "He had a long tube-like face with a long rounded open jaw and a long depressed nose. His eyes were alert but quiet, and in the miraculous moonlight they had a look of composure and of open wisdom as if they had belonged to one of the great guides of men. He might have been a Virgil summoned in the middle of the night to go to Dante, or better, Raphael, awakened by a blast of God’s light to fly to the side of Tobias." It is hard to think of a cartoonist who could not import his characters with humorous features the equal of O’Connor’s. It is impossible to think of an author who could compose her sentences.

Maybe, I thought, it is the cartoons’ subject matter that deserves attention. Indeed, Moser touts them for providing "glimpses... into the writer she would become." And Peter Wild of The Guardian echos this view in a cover blurb which avers that in them O’Connor’s "darkness... (was) already showing its teeth." But these claims too carry little water with me. The cartoons are not without charm, but if O’Connor’s fiction did not exist, I doubt they would hold anyone’s interest. Their degree of darkness would disorient few, and the nip of their teeth not frighten many. O'Connor came to believe that, in a world grown numb, the artist’s job was to shock. "(T)o the hard of hearing you shout," she famously remarked, "and to the almost-blind you draw large and startling figures." Her cartoons do not startle. They tweak holidays spoiled by term papers, book store crowds and vacations’ end. I doubt any cartoonist for any college humor magazine could have tackled subjects more mundane or less controversial. Aside from a series reacting to the presence of WAVEs on campus, there is nothing of current events, politics, family, religion, or race. There is no jazz, no liquor, no fumblings in back seats of cars. To me, proposing to see O’Connor’s writing in her cartoons is like suggesting beer Jackson Pollock dribbled on a napkin in 1935 prefigured "No.5, 1948" or that a firecracker Robert Oppenheimer lit while a sophomore at the Fieldston School foreshadowed his achievements at Los Alamos.

Then, within two years of having fixed her sights on foes no more provocative than gym class and term papers, and having banked little in the way of life experiences likely to wow Norman Mailer or, for that matter, Carson McCullers, O’Connor had underway a novel whose principal character would eventually sleep with a "pure filthy right down to the guts" 15-year-old, deliberately run over a consumptive father-of-six street preacher, receive a "dead shriveled-up part-nigger dwarf" from an acquaintance destined to cavort in a gorilla suit, gird his chest with three strands of barbed wire, layer his shoes with gravel, small stones and broken glass, and blind himself with lye. To have made this journey, it would seem, O’Connor had to have snapped chains as punishing as Sherman’s March and crossed a gulf the breadth of Great Dismal Swamp. 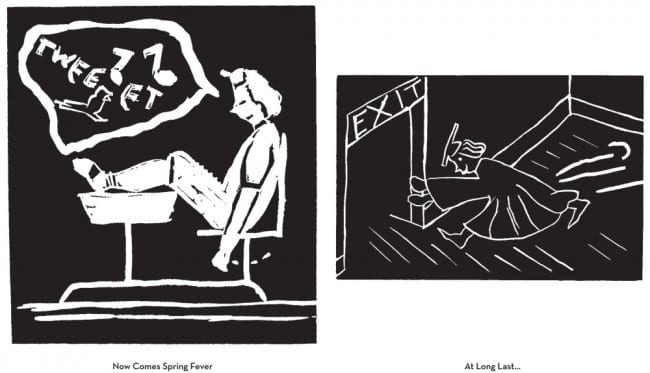 Flannery O’Connor: The Cartoons acts as if there was no mystery as to how she managed. It proceeds as if Step One is "Teach a chicken to walk backwards"; Step Two "Mock Physical Fitness Day"; and Step Three... BANG! You have bumped noses with Hazel Motes. It makes nothing of the newt eyes and bat claws bubbling within O’Connor’s cauldron: prematurely deceased father; controlling, disapproving mother; not entirely chosen celibacy; lurking, potentially fatal genes. It overlooks the gasses fermenting in this mix: frustration and fright, bitterness and pain, grief and rage. All brewed while she drew her way through GSCW. All foretold unseen vistas, untasted spice, unheard notes, unscented perfumes, uncaressed flesh. Only her imagination could compensate. Only it could lead her on. And cartoons only carried her so far. She required a greater conveyance to discharge what she held within.

O’Connor would not encourage this type of analysis. She believed the writer’s job was to look at the world and penetrate below its surface to "mysteries" that could not be recognized by psychology or economics. Grace, the Fall, Redemption, and Salvation commanded her attention. Her work should be her readers’ concern, she believed, not her life. But she also recognized that "what one sees is given by circumstances and the nature of one’s particular kind of perception." O’Connor did not reflect then upon what the circumstances might be that shaped these perceptions, but she once remarked that "anybody who has survived his childhood has enough information about life to last him the rest of his days." It is difficult to escape thinking her own childhood played some part in this conclusion. And if childhood provides the circumstances that account for how one sees, ignoring it seems, itself, an evasion from surface-piercing inquiry.

I think the significance of O’Connor’s cartoons lies not in their connection to her fiction but the gap between them. That they stand so puny and so far from her writing speaks to the wonder of the creative process. They attest to the mind’s capacity to access and master dangerous and potentially self-devouring material in ways that can not be foreseen, for which logic can construct no model for others to follow. In Georgia, armed only with cartoons, O’Connor was unable to forge her way toward a sustaining salvation. Released to Iowa City, out from under assorted weighty thumbs, she was free to soar in a manner that encouraged her to dig. Turned toward fiction, she felt compelled to unearth her particular "prophetic vision," no matter how its components squirmed and slithered, no matter whom it unnerved or repelled, and to pursue that vision to the full expression of its peculiar excellence. In doing that, she found the means to lift the crushing load she carried. She lengthened her days, lit her nights, and set beside her curses radiant glory. 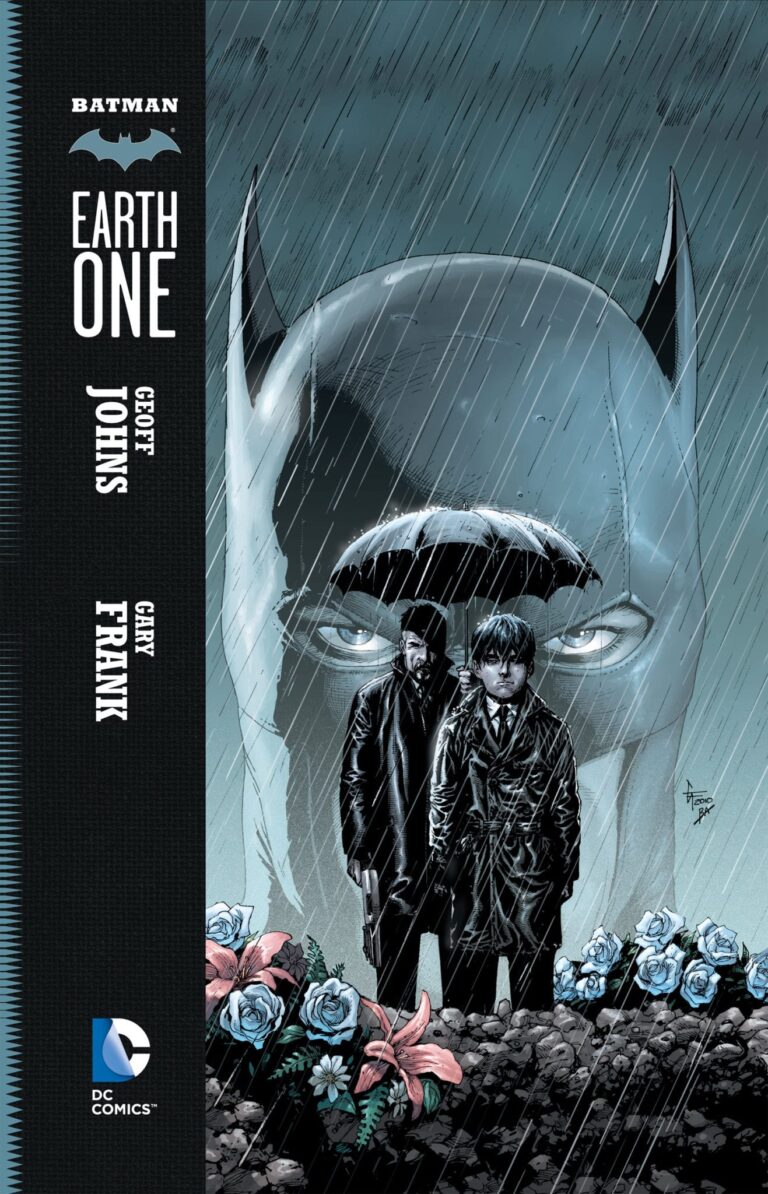