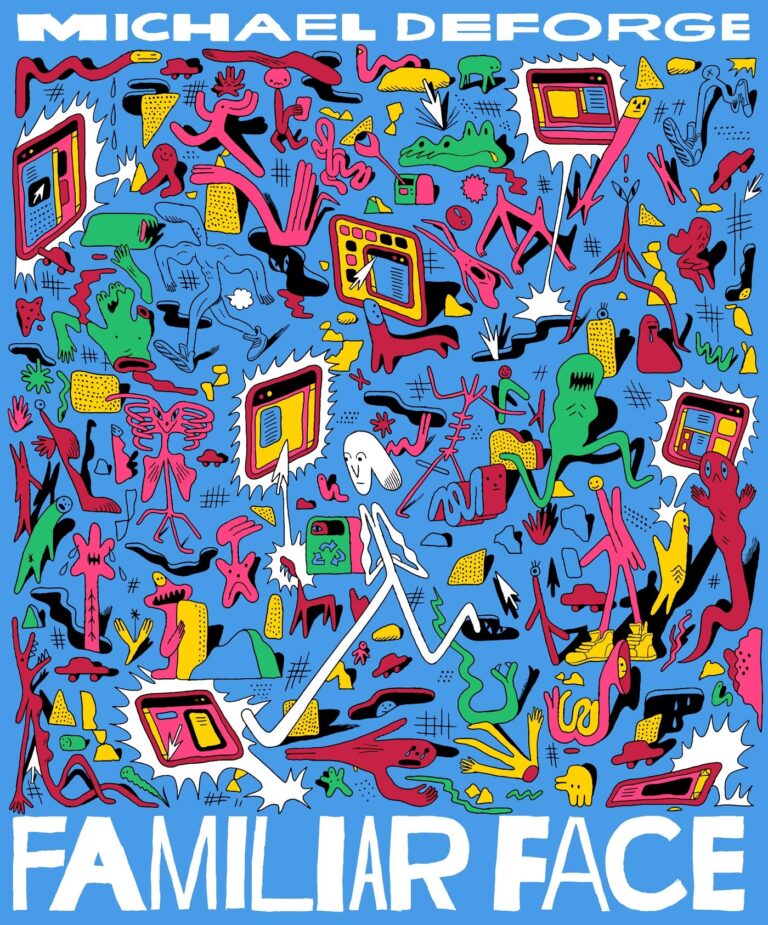 Meditations on technology and its impact on the human psyche, both singular and conglomerate, often fall into unforgivingly bland navel-gazing territory. What we could once wax solipsistically about is now perfectly tied into every facet of our social, financial and psychic survival, into our public and private lives. Most speculative fiction concerned with exploring this constant and progressive technological binding doesn’t often explore the gross mediocrity of it all, the cognitive dissonance that constant superfluous upgrades cause us.

Familiar Face by Michael Deforge is the author’s 1000th comic book (congratulations!) and explores a society undergoing constant environmental and physical change at the hand of a faceless technological force. Their homes, their cities and their bodies ‘update’ sporadically, roads change direction, interiors are re-designed and bones disappear. There is a constant simmering dread and existential nausea amongst the citizens of this city as they constantly brace themselves for something new and unnecessary. The story is told from the perspective of a government worker who reads a randomized selection of the citizen’s complaints, most from current times and eras bygone, about their problems with updates and issues in general, not to address them, but simply to acknowledge them.

Before I dive into the meat of the story which becomes much more intimate and complicated, I’ll say my appreciation of Deforge’s comics are often hampered by the monotonous rhythm his narration is often delivered in as well as the stringent paneling compositions. It’s at direct odds with how bizarrely striking and eccentric his art is which most artists of the same abstractionist approach take, I’m guessing, to ground their work and offer clarity. The pacing this type of paneling conveys becomes a flat rhythm to me, metronomic and tedious. Despite that, Deforge offers a few breaks from his paneling formula that broke up the laborious narration as the story branches out into the more fantastical and dramatic aspects of the narrator’s life. There’s also a pleasing dimensionality to the art in Familiar Face, a minimal hatching that adds shading and texture to flat organic forms and solid black drop shadows enforce a subtle depth and solidity to these abstract characters and objects. The controlled color palettes also impart an engaging visual cadence as scenes change from subdued two color combos to confetti-like medleys of color. 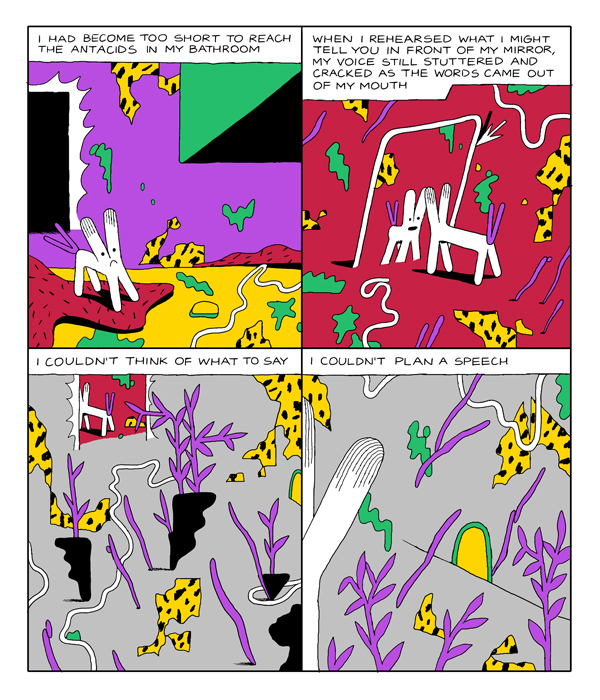 Like many of Deforge’s stories, Familiar Face delves deeper into the mutability of the body and self, the instability of society and how intimacy becomes mediated through technology. One morning after an update, the narrator’s girlfriend disappears. Unable to find any trace of her, the narrator goes back to work, temporarily taking on a new artificial roommate to fill the void. The complaints the narrator fields range from encounters with ex-celebrities, dying wishes and replacing pet birds to, finally, a complaint she recognizes to be written by her vanished girlfriend. The narrator, with the assistance of her cheekily adoring computer, sets off to find her and joins up with an anonymous political group whom she thinks her girlfriend is apart of. The narrator is disappointed to find out they don’t know her, nor do they know their own organizations aims and goals in order to “avoid being co-opted, appropriated, infiltrated or absorbed”. Disheartened and paranoid, the narrator returns to work and erases every complaint in her system before rejoining the organizations protest. Finally in the last panel, we see a glimpse of the missing girlfriend; whether a memory or an image of her currently, we can’t tell except that she seems content, maybe even free. 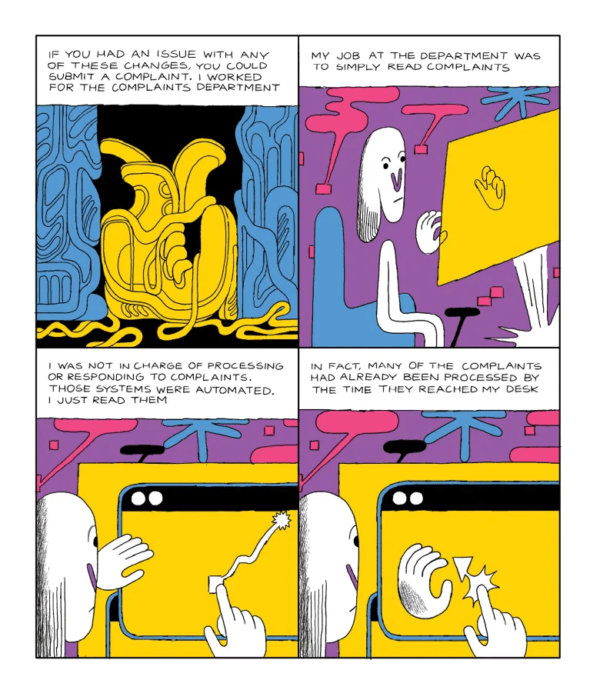 Any human with above room temperature IQ can design a utopia. The reason our current system isn’t a utopia is that it wasn’t designed by humans. Just as you can look at an arid terrain and determine what shape a river will one day take by assuming water will obey gravity, so you can look at a civilization and determine what shape its institutions will one day take by assuming people will obey incentives.

But that means that just as the shapes of rivers are not designed for beauty or navigation, but rather an artifact of randomly determined terrain, so institutions will not be designed for prosperity or justice, but rather an artifact of randomly determined initial conditions. Just as people can level terrain and build canals, so people can alter the incentive landscape in order to build better institutions. But they can only do so when they are incentivized to do so, which is not always. As a result, some pretty wild tributaries and rapids form in some very strange places.

Deforge has drawn a perfectly prescient world in Familiar Face: a society forced into being optimized into abstract capitalist ideals, identities are displaced along digitized social lines, and any sort of normalcy hijacked by imperialist politics and economics. Its a world where no one can communicate the present in any tangible, meaningful way and are forced to simply function within it to the best of their ability, where the atmosphere is one of perfect, unalterable anxiety and perpetual crisis. Deforge delivers this queasy look at the future in meticulous detail but hope and love and rebellion still exist, even buried under the shifting surreality of technology; we only have to wonder if those feelings will be the next to drown beneath incoherence as the future morphs to encourage less human values. 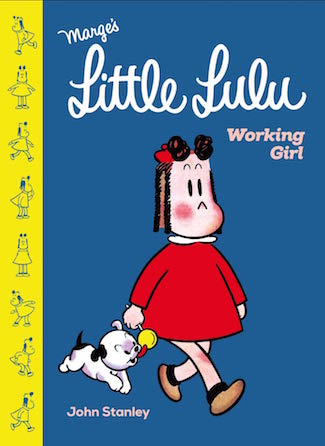