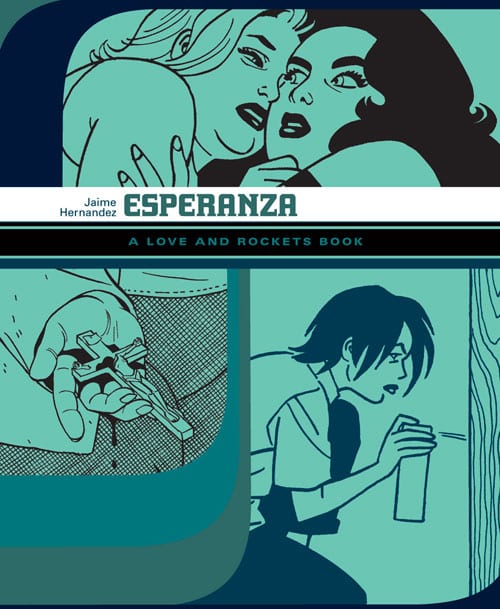 The Locas grow up. Collecting material from Love and Rockets' second volume (previously found in Ghost of Hoppers and The Education of Hopey Glass), the latest in Fantagraphics' perfectly executed series of L&R digests finds Maggie, Hopey, Izzy, and Ray D. coming to terms with no longer being the life of the party and the heart of their scene -- at least not without exhausting effort.

Some of them handle it better than others, to put it mildly. Izzy's trajectory stops just short of being downright tragic. Izzy's long been a haunted figure -- by personal losses for sure, by mental illness probably, by actual demons quite possibly -- and here she finally succumbs. Happily, however, her final act of immolation is not of the "self-" variety: She burns down her haunted house and its many memories, departing the gang's old neighborhood of Hoppers for good. Taken in tandem with the grand farewell provided for the similarly outsized figure Penny Century in Love and Rockets: New Stories, this could easily be seen as Jaime bidding farewell to his strip's stranger characters, but I think it's more likely that he's taking away Maggie and Hopey's mother hens, leaving them to make lives for themselves on their own.

Indeed, the central storyline of Esperanza's first half isn't Izzy's downfall at all, but Maggie's struggle to account for the discrepancy between the woman she is now -- a responsible professional with professional responsibilities, who likes to stay out of trouble, who maybe wants more out of her best-friend-with-benefits Hopey than the friendship and the benefits, and who can't tell if that relationship is the exception or the rule with regards to her sexuality -- and the girl she was when she first came to define herself as a person -- a carefree hellion whose folie à deux with Hopey was, as best she could tell, the center of everyone's universe. The destruction of Izzy's house is a phantasmagorical sequence in which each room holds a new memory or horror or both, like the climax of The Shining; it features Jaime's best pure-horror cartooning, yes, but it also gives Maggie the opportunity she needs to put her ghosts to rest.

Hopey fares even better. Oh, sure, she's still a womanizer and a troublemaker who can't help but be cruel to the people she's closest to -- she flirts with more people in the course of the week over which we follow her than Maggie would dare do in a year, all while her relationship with live-in girlfriend Rosie crumbles in heart-breakingly intimate fashion, like reaching out your fingers and squeezing a candle out. Here's where Jaime's facility with drawing and arranging bodies really comes into play: Fully clothed while out and about, Hopey's a sexy, edgy thing who's attracted to and who attracts a dizzying array of physical types, male and female; at home, nude or in underwear, with and without Rosie by her side, she's scrawny in places and paunchy in others, vulnerable whether in a bittersweet last romantic interlude with Rosie's smooth curves or sitting on the edge of her bed afterwards, alone.

But I said she fares better, and I meant it. None of that, neither the fun and fascinating and attractive and wild parts of her personality, nor its destructive downside, prevent her from major personal and professional growth, as she becomes a teacher's assistant at a preschool. Seeing Hopey with a textbook and pencil in her hands, nodding off during a wee-hours studying session, or befriending an unruly class of little kids who can probably sense she's just as unruly as they are deep inside, feels like a tremendous reward for us, her long-suffering admirers. She can better herself, she can do some good in this world, she's good with kids (always an endearing feature in fictional characters, almost manipulatively so to be honest but who cares), and she's capable of caring about someone other than herself and Maggie -- and she can do it all without becoming any less Hopey, for better or for worse. Boo to the notion that maturity requires you to swap out who you are for some other person you ought to be.

In his own way, Ray's struggling as much as Izzy; if only he had a house to burn down. Instead he has Vivian "The Frogmouth" Solis, a sometime-stripper, sometime-gun-moll, no-time-actress with Jessica Rabbit's body, Lilly Collins's eyebrows, Mercedes McCambridge's voice, and a penchant for attracting dangerous dirtbags all her own. That she attracts Ray should probably tell Ray something, but he's the only character with interior narration captions for a reason. He's living in his own head even when drawn into the Frogmouth's whirlwind world of dive bars, street fights, breaking and entering, five-hour fuck marathons in the back seats of cars, seedy comic cons (!), and, apparently, murder -- always too busy pining after Viv before he can have her, pining after Maggie after he does, worrying whether he's at the right party to see the girl he wants to see or avoid the dude he doesn't, wondering why the torrent of sensation and sketchy misadventure to which he's subjecting himself can't pry his brain out of the two years it spent with Maggie way back when.

It all gives Jaime a vector for some of his all-time sexiest art, seen through Ray's eyes either directly or indirectly. A stand-out moment for me is a gorgeous glimpse of Maggie at a party, not even doing anything but standing there silently, yet with a light in her tiny distant eyes that sells her as (Ray's description) "the awesomely beautiful grown-up she'd become" -- the sensual frisson of seeing a girl you once knew to be beautiful transmuted by age into a new kind of beauty. And don't let's ignore the Frogmouth: The marvelous panel in which her arm, hair, teeth, thigh-high vinyl boots, and ridonkulously full hanging breasts all fight for space in Ray's car as they finally get it on; an alleyway tryst that brings out the sexiness in Ray's black-clad, mustachioed artist-gone-to-seed physicality as well.

But none of it does Ray any good. At this point that brain's as weary as his puffy face and rumpled as his oversized shirts. We readers know it'll still be a few years, and a traumatic head injury, before it all gets ironed out. But if there's one thing Jaime's Locas stories in general, and this volume in particular, tell us, it's that sometimes you have to be a grown-up for a long time before you grow up. It's worth the work, and the wait. 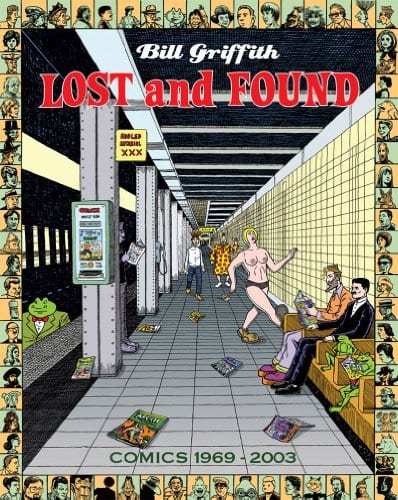