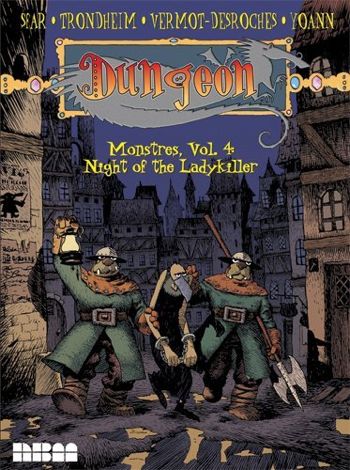 The Joann Sfar/Lewis Trondheim Dungeon series continues to offer a variety of pleasures for both devoted readers and those interested in a more casual glance at well crafted fantasy stories. The Dungeon series has three separate but related storylines that take place over a long period of time, as well as multiple spinoff volumes. The Dungeon Monstres series focuses on specific minor characters, giving them a spotlight story. Depending on the story, the tone can be played for laughs or can carry darker themes. Trondheim & Sfar can serve up a straightforward adventure story with a complex, twisting plot as well as anyone, but always manage to leaven those stories with humor. By the same token, even their more absurd stories tend to be tightly plotted and contain grisly moments.

As always, each NBM translation shrinks down the original art and packages two 46-page stories into one volume.  The first story, "Night of the Ladykiller", was drawn by Jean-Emmanuel Vermot-Desroches in a style that roughly mimics Trondheim's pleasantly sketchy style. This story takes place in the "Early Years" timeline, following the sorcerers Horus and Alcibades during their time in school. This is a mystery story jam-packed with intrigue, sex, violence, and magic, featuring a surprise twist that leads to a clever resolution to the plot problem introduced early in the story. The central mystery of the story—is the dour Horus really responsible for getting so many young women pregnant?—is one that the reader is led to believe is a frame-up until we actually see Horus in action, and then those expectations get turned around again. Trondheim & Sfar have a way of getting their characters into binds that are seemingly impossible to escape before a quick bit of lateral thinking saves the day. 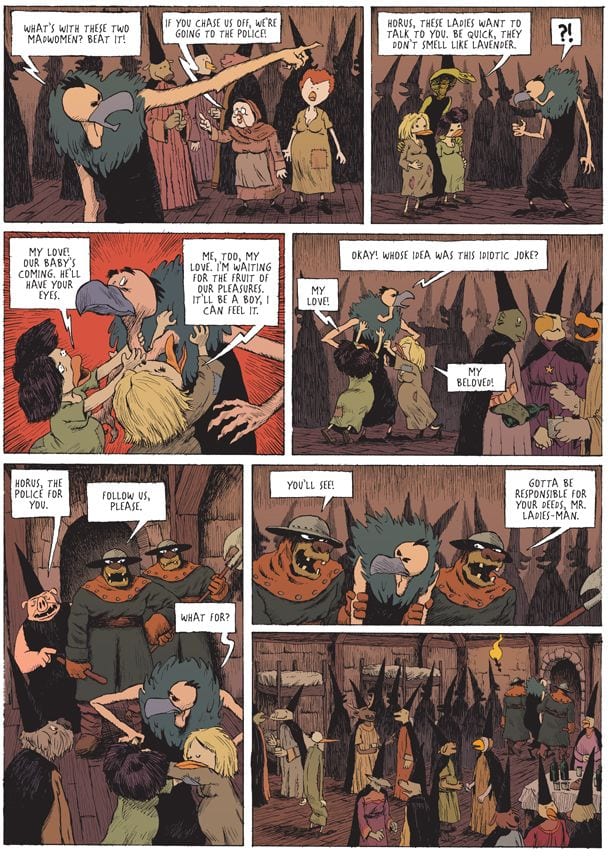 This is probably my favorite of the Monstres stories, because it works on a number of levels. A new reader could come in and understand most of the story beats with little difficulty, which isn't necessarily the case for a number of Dungeon stories. The most pleasing surprise in the story is the way Trondheim & Sfar manage to wring emotion out of Horus's otherwise businesslike character; his status as an anthropomorphic vulture is quite fitting. Tying his genuine lovesickness into the resolution of the plot was another masterful stroke by the artists. On top of all that, there are a couple of genuinely thrilling action sequences that are nicely rendered by Vermot-Desorches with an extensive use of cross-hatching and shadow. Even when, at moments, figures are rendered with a surprising level of naturalistic detail, they still fit into the more whimsical Dungeon style.

The second story, "Ruckus At The Brewers", is sillier and more cartoony in every sense. It involves a bumbling dungeon monster named Grogro who is given a specific mission (get beer) and stumbles into and out of a series of ever-escalating and ridiculous perils. Artist Yoann contributes a painted approach that gives the whole thing a touch of Jim Woodring in terms of its candy colors, bizarre creatures, and detailed style. It's a treat to look at and fits well with the story, which is far more of a trifle than the standard Dungeon tale. One of the delights of reading a Dungeon story is the way Trondheim & Sfar take their time in exploring their world: filling in back stories, adding more context to the complex cultural forces at play and simply following people around to see what they might do. 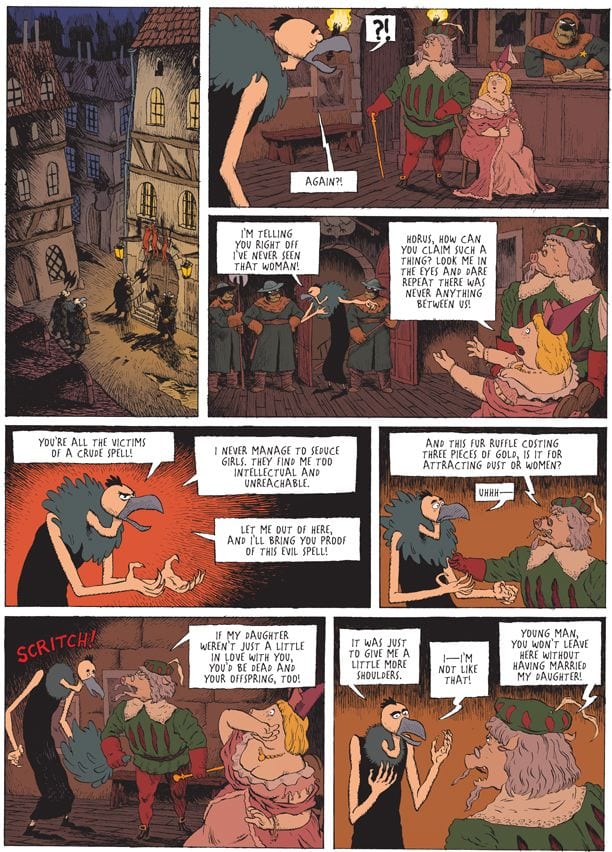 The malleable Grogro bumbles from adventure to adventure, accidentally happening upon a zombie infestation, getting sold into slavery and finally winding up in a gladiatorial arena. His unwanted sidekick winds up directing much of the action before he's unceremoniously cast aside, taking a young version of a character who will be a key presence in the Twilight series with him. It's a neat bit of continuity building for long-time fans to see a young, vicious toddler of a red rabbit bounding from danger to danger while still being inherently amusing for a new audience. While the Dungeon side-projects can certainly be skipped over in favor of the main volumes of the series, the Monstres series is essential reading for any fan of the world that Trondheim & Sfar create. As always, this is genre work at its best: intelligent, witty, thrilling, visually interesting, at times emotionally wrenching, and in possession of both affection for fantasy and a healthy dose of humor about its ridiculousness. 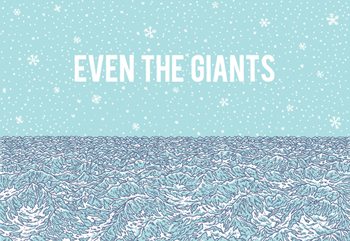 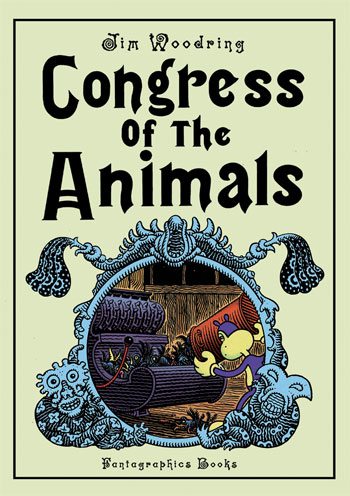 Congress of the Animals