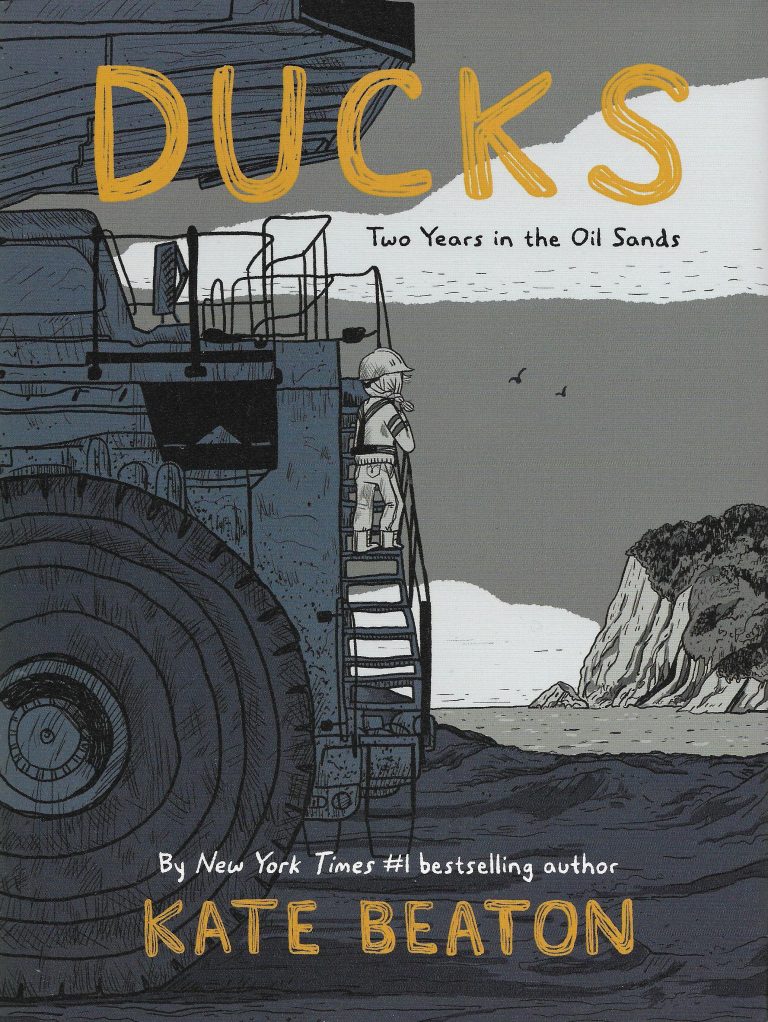 Where are we from?
How do we live?

Kate Beaton and I are the same age, and we hit the indy comics scene at roughly the same time. Like everyone else in the world I became a fan of her work - the funny historical stuff and the (also funny, but serious too) autobio stuff. We made friends, another one of those weird internet friendships that feels both intangible and invaluable.

Over the 15 years Kate and I have been industry friends, things have changed a lot. For one, the world feels more fucked than it ever has before. For another, we all got older. Loved ones died and babies were born. The internet, which once felt like a thrilling refuge (I was 24), is now a firehose of content impossible to parse (I am 39). My grasp on what it is we’re supposedly doing here with this ‘comics’ thing has gotten distressingly tenuous. That was where I was at when Ducks came out. It’s 436 dense pages, drawn simply and impeccably. It’s an autobiographical and sociological masterpiece, and I would like to talk about it. 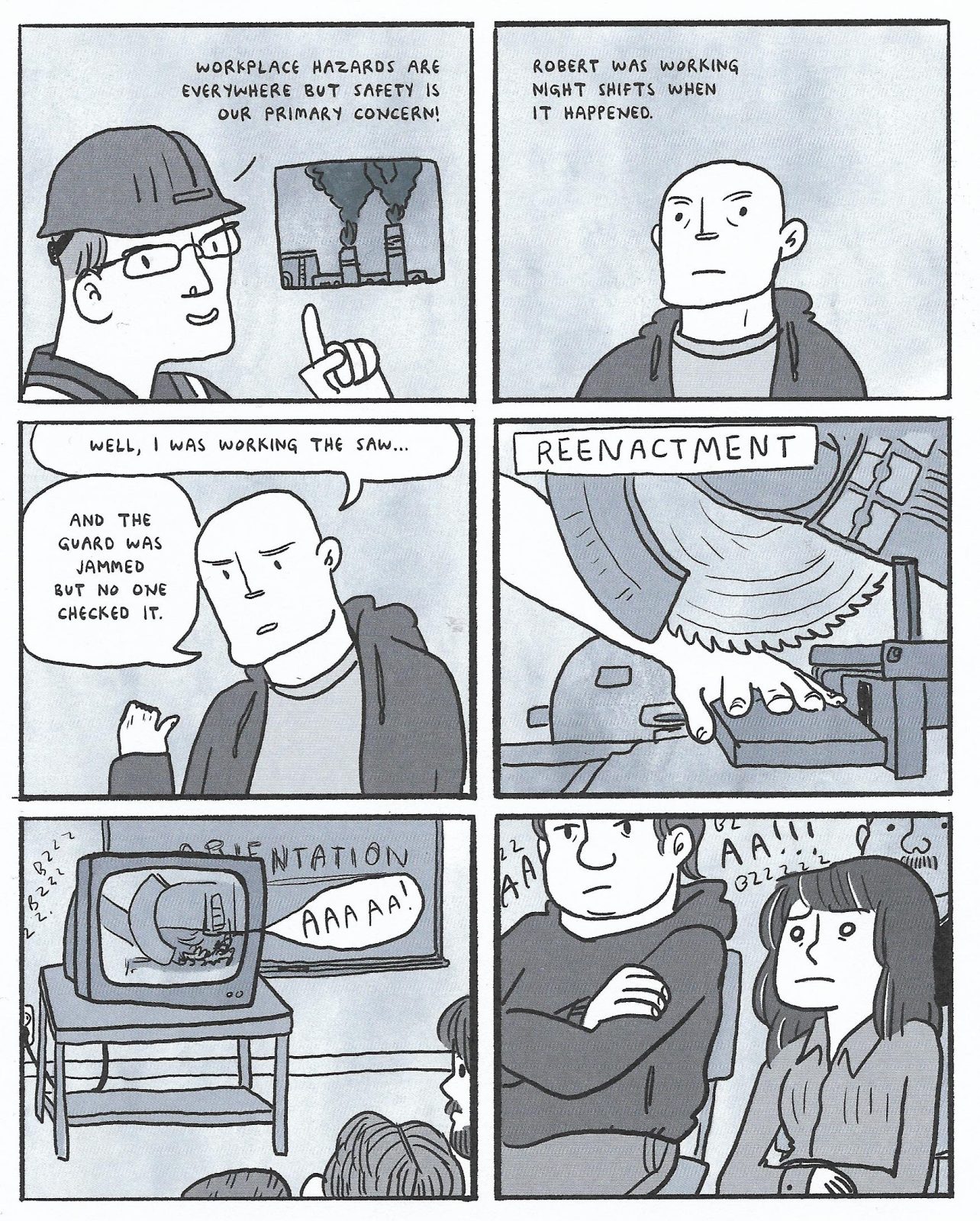 In an early scene in Ducks, Kate is working at the tool crib in western Canada’s oil sands. Outside is the jagged architecture of Syncrude Canada Ltd.'s base mine. Inside is all industrial shelving filled with tools and equipment. Kate notes that it’s unusually quiet. “It’s the Newfoundland Radio Hour,” a coworker in a hardhat and work gloves explains. "Everyone is sitting in their trucks.” He turns on the radio. The DJ announces "That was 'Where Have All the Little Boats Gone?' by Eddie Coffey from his album Come Closer, East Coaster. And now we have a real treat…”

In Ducks we see that most of the people who work in the oil sands of landlocked northern Alberta are from somewhere else. Beaton is from the island of Cape Breton, in Nova Scotia, on the Canadian east coast. A lot of her coworkers come from there too. They are from Newfoundland (“accordions and codfish”) and Cape Breton (“fiddles and lobster"). They share similar accents and familiar names and a deep love of home. Like Kate, they wish they could return. But like Kate they need money. The old jobs are gone - coal mines and steel plants shut, the Grand Banks irreparably depleted by overfishing. They can’t find work there.

Oil sands, or tar sands, are sand and rock containing bitumen, a dense form of crude oil. Bitumen extraction is laborious, environmentally devastating, and, especially in 2005-2008 when the book is set, extremely profitable. “Is this a... nice place to work?” Kate asks a boss early on. “What kind of question is that?” he responds. “You’re here and you make money.” It is not a nice place to work. It is boring, dangerous, and isolating. But this is where the jobs are. So the have-nots of Canada go to the sands, where none of them really live. 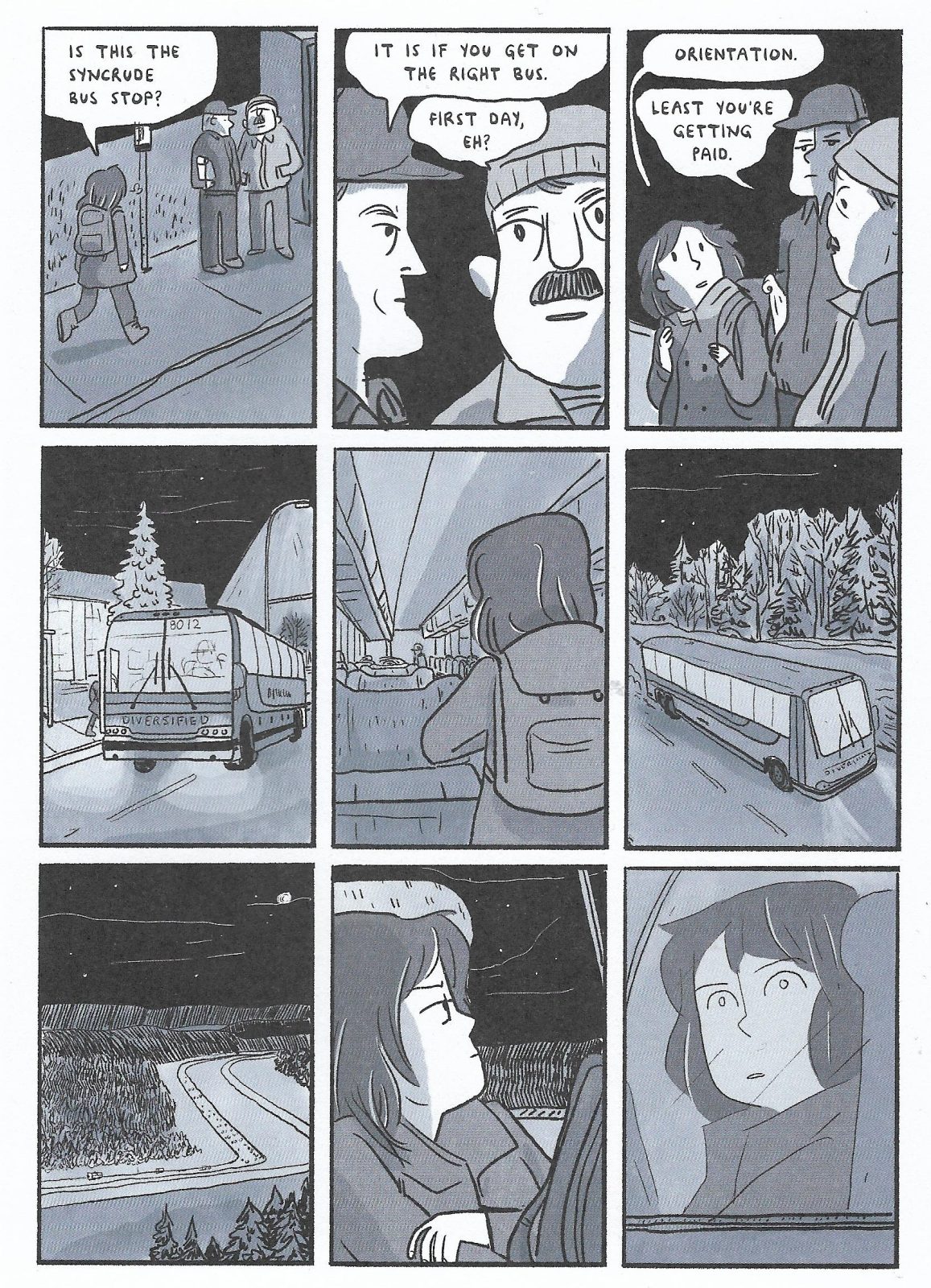 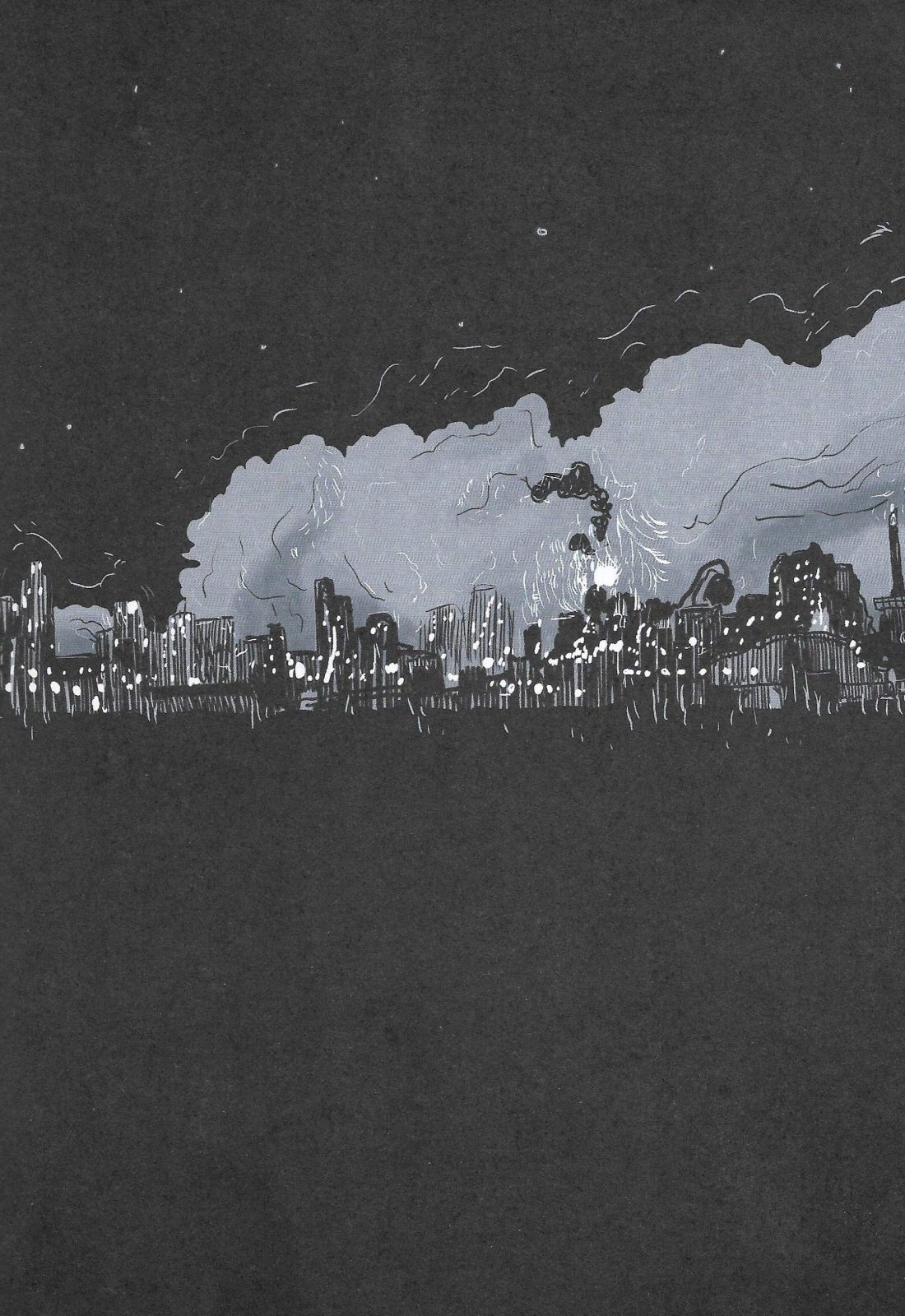 On her way to a better paying job at an OPTI-Nexen camp, where workers stay 24/7, Kate’s Somali taxi driver tells her: “You be careful, young girl. You live here, they don’t. Do you know how people treat a place where they don’t live?”

In the oil sands the workers are overwhelmingly male. Especially in the work camps, they are away from the rest of the world - away from their communities and families. Beaton is one of the few women in the oil sands, and throughout her time there she is objectified and sexually harassed over and over and over again. Some incidents are small and others are gut-wrenchingly big. There are decent guys and awful ones, but in many of them the good and the awful are nauseatingly mixed together - avuncular coworkers are kind one moment and sexually aggressive the next. The jokes and entendres are repetitive and grueling. In a trailer of 48 rooms there is only one other woman, and men rattle Kate’s locked doorknob at night. She doesn’t feel safe, and she’s not. She has no recourse. She gets broken down.

Kate asks her boss, “Do you think people are different at home than they are here?” 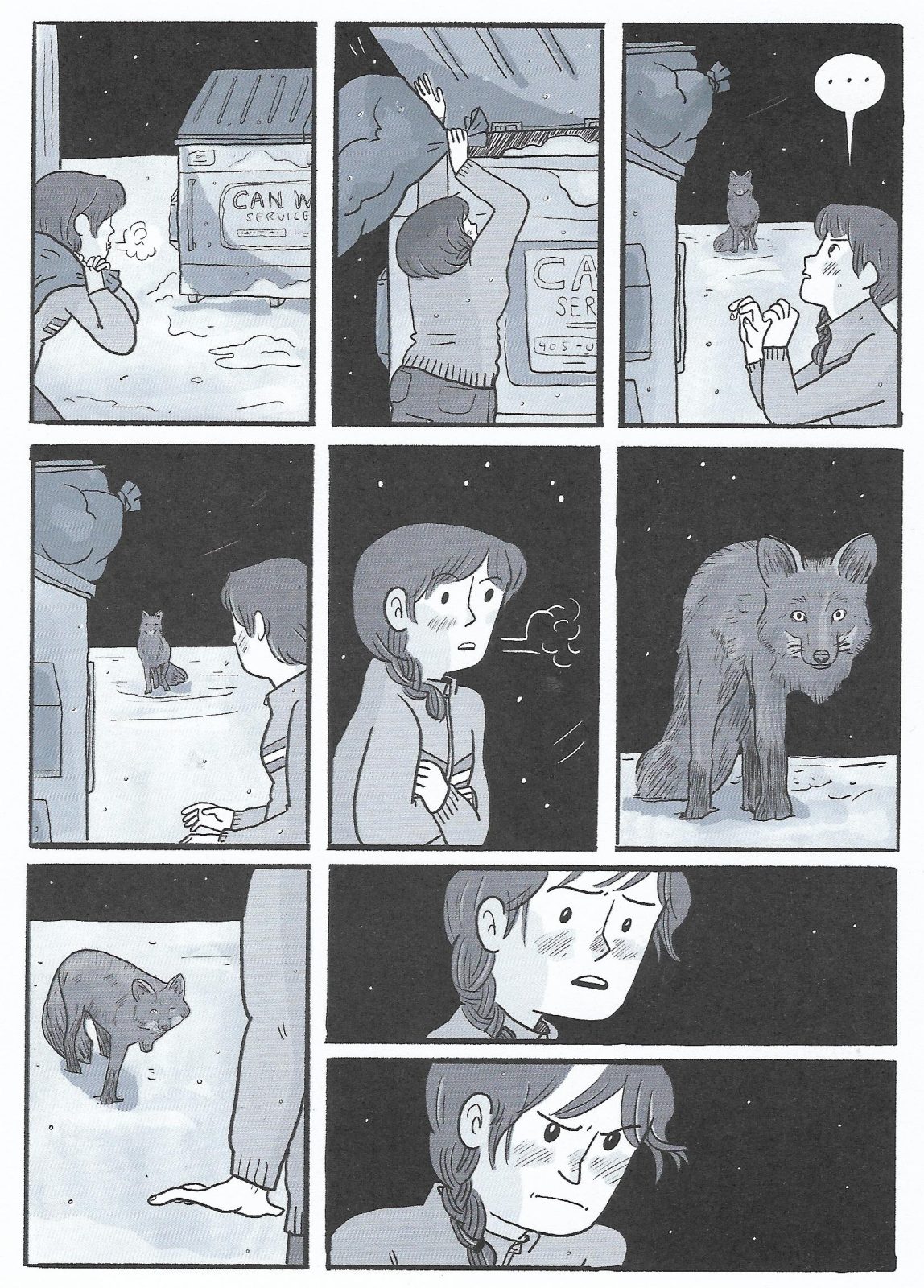 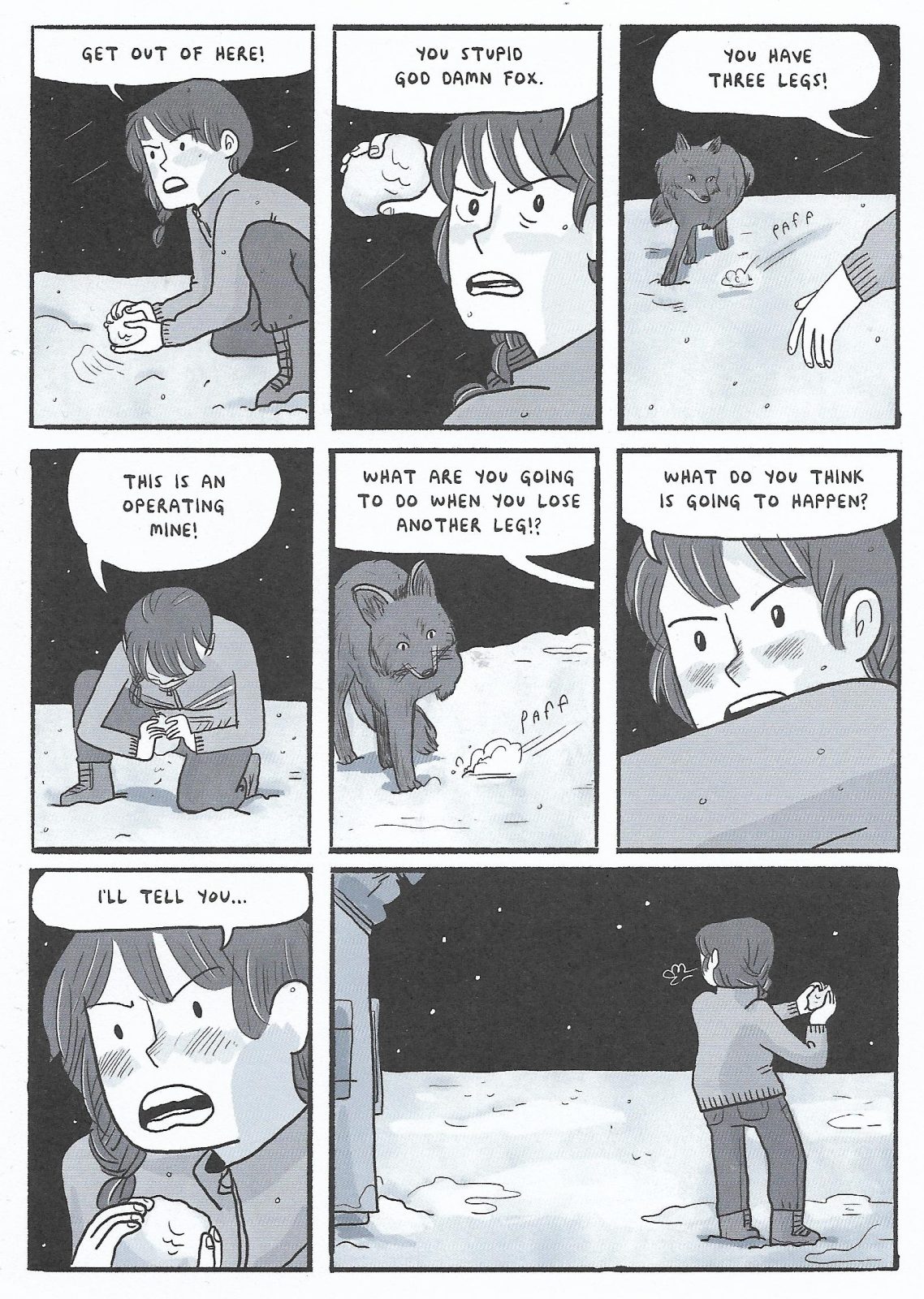 Walking through the OPTI-Nexen camp at night, Kate hears a man playing guitar and singing a familiar maritime song alone in his room.

Standing outside his window in the dark, Kate sings quietly along with him. 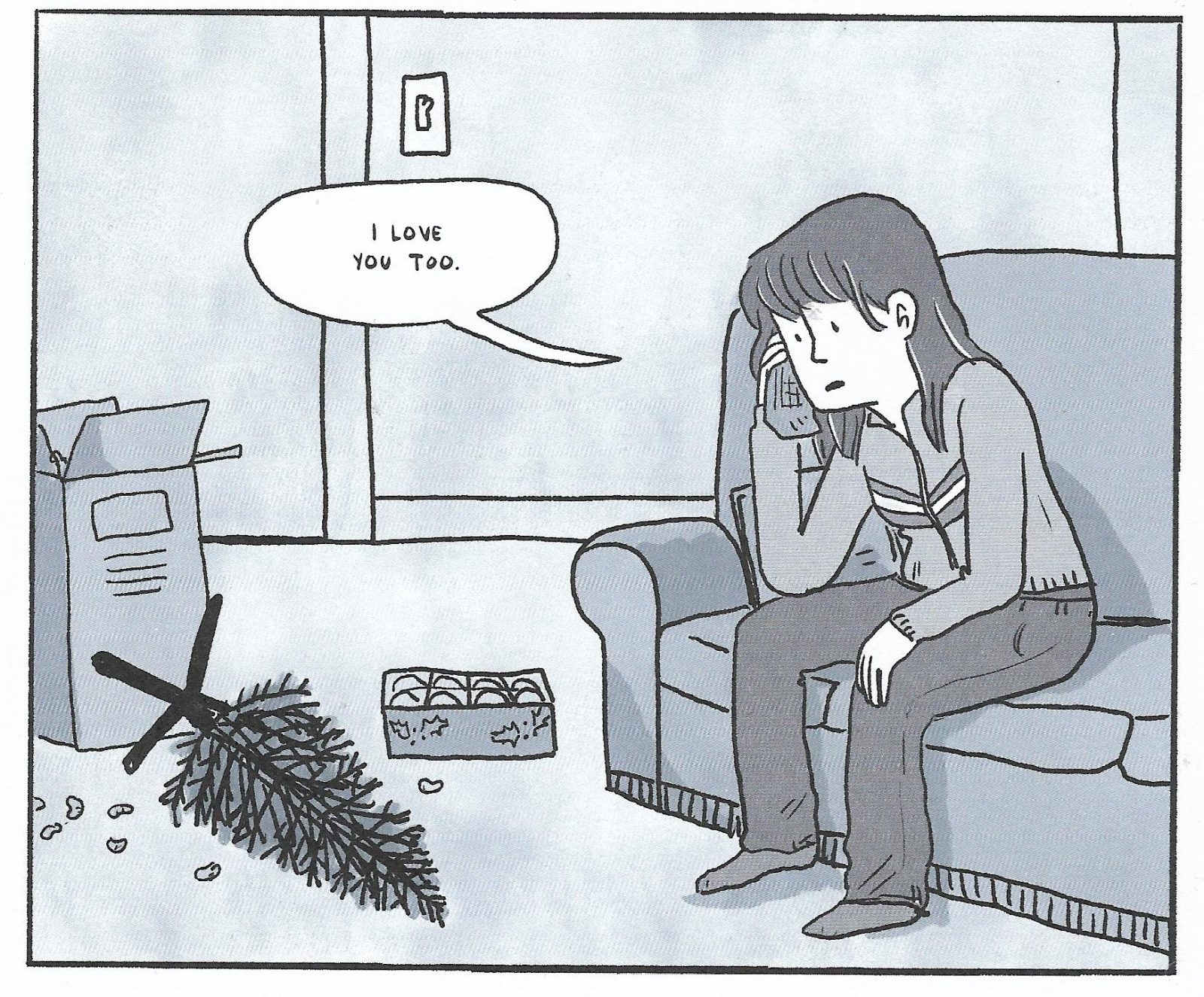 There are a lot of extraordinary things about Ducks. Beaton manages to deftly juggle huge amounts of information. The tremendous number of old white guys wearing hardhats and safety vests - how come we can tell them apart? Her position in this hyper-male space is driven home in the exact way it happens in real life, through shitty joke after comment after leer - how come it isn’t boring? (It clearly got boring to Beaton while she was living through it, although part of the pleasure of the book is when she gets back up swinging with retorts the rest of us wouldn't have had the brains to come up with or the guts to say - like when a group of men in a towering pickup yells at her "You want a threesome?" and Kate fires back: "There's four of you in there. You've got more than enough.")

The book is about big, complicated issues: economic exploitation, misogyny, the abuse and disregard of Indigenous land and people, class, education, upward mobility, labor, environmental destruction, sexual harassment and assault, toxic industrial waste, power, history, complicity, identity, loss, sacrifice, family, home. The ground the book covers is far too broad and in-depth to go into in one review. But Beaton touches on these myriad complex subjects gently. Everything is told through conversations she had or overheard. It's never didactic or ponderous. She lets us make the connections ourselves.

From a purely technical perspective, how did Beaton manage to stitch together hundreds of short conversations along with flashes of landscape seen from the window of a pickup truck, and have them become something so solid, seemingly so much bigger than the sum of its parts? Beaton is smart and careful, with an unmatched skill at her craft. In another cartoonist’s hands it would not have been possible. 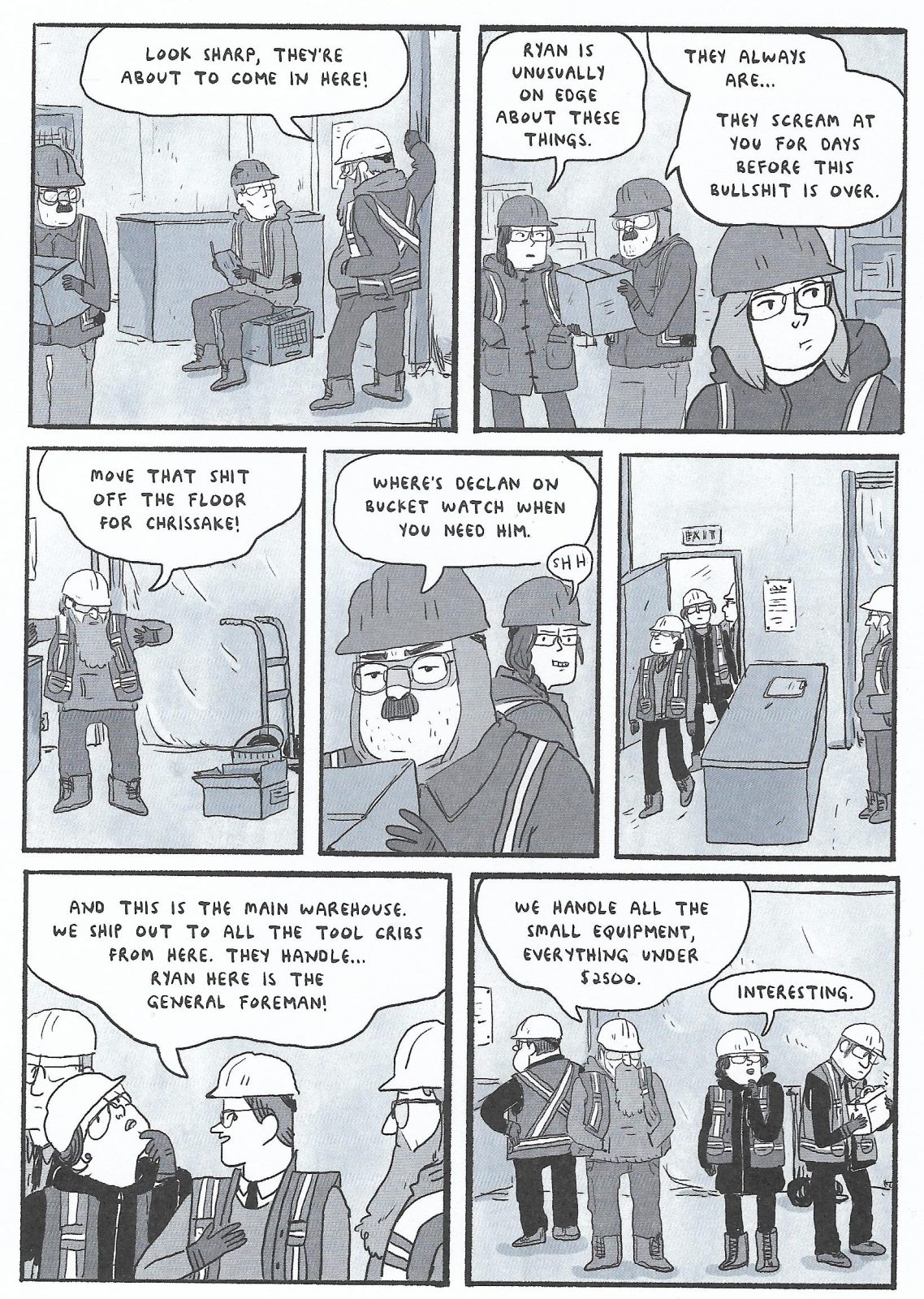 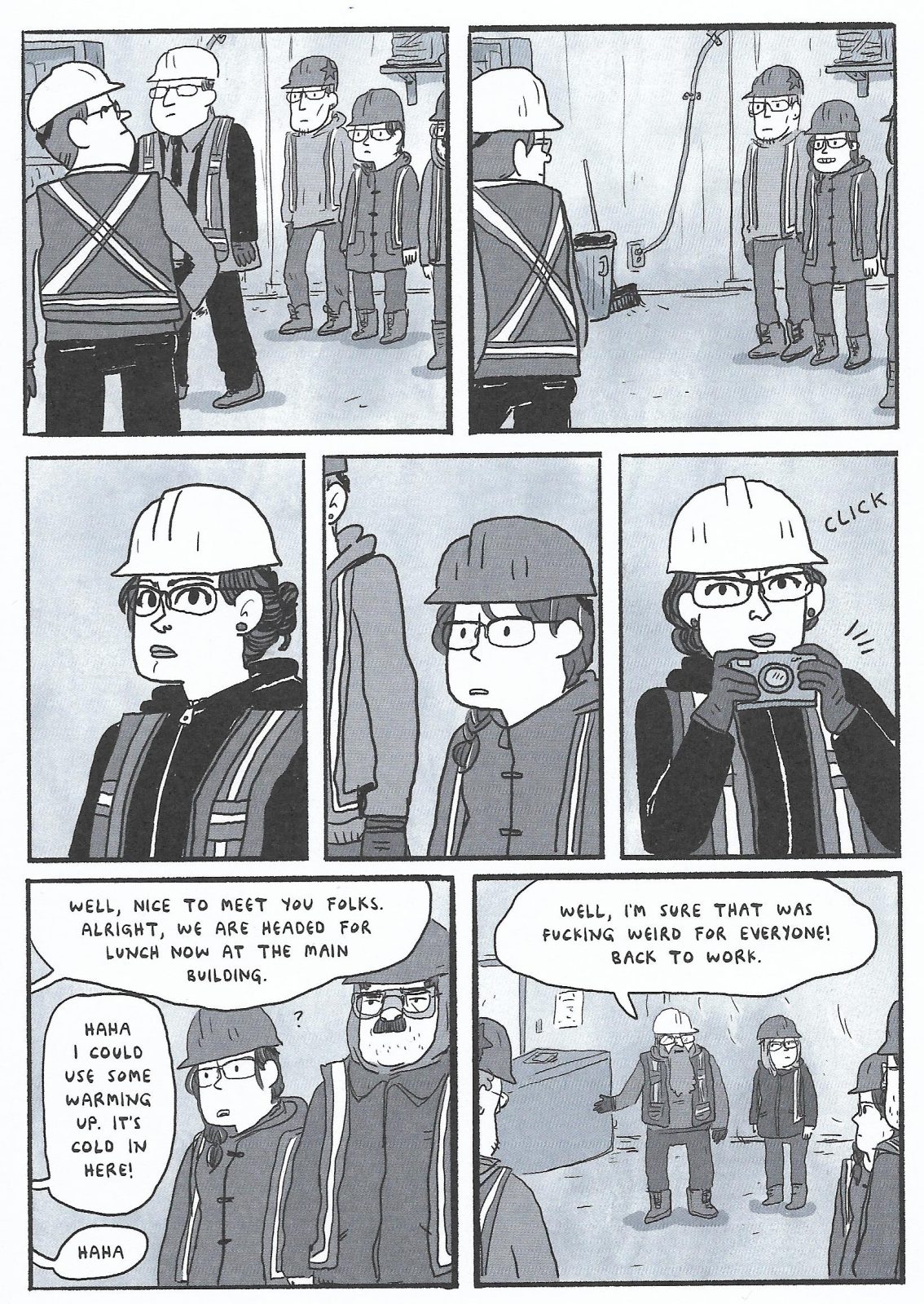 But the real reason Ducks is extraordinary is because Beaton herself is extraordinary. Few people in the same situation would have listened as closely, asked as many questions, and thought as deeply about what they had seen and heard as Kate did (often to the irritation of her coworkers). The heart of the book is how Beaton handles the central dichotomy of her time in the oil sands: she cares about the men who worked there while rejecting how they treated her. She hates the misogyny and harassment, she doesn’t try to excuse it or explain it away. She was irreparably harmed, and she is angry. But she holds this harm and anger while somehow retaining her empathy for these same men. Like her, they were desperate and they were exploited, stuck there in the tailings ponds of Alberta, far from home.

We all know these are bad times. Sometimes the forces buffeting the world–capitalism, globalism, white supremacy–seem like faceless unstoppable powers; other times the faces inflicting monstrous violence are all too human. They are the faces of politicians and CEOs, but also uncles and neighbors. It often feels like there are only two options: to tolerate the intolerable, or to be overwhelmed by anger and hate. Either option I move toward, something precious inside me gets lost.

Reading Ducks, I felt more hopeful than I had in a long time. I’m not hopeful that Things Will Get Better or We Can Win - I’m not built for that, and I don’t think the wind is blowing that way. But Beaton’s example helped me regain the hope that we can both stand against what we know to be evil, and also extend mercy and grace. If we can do that, we don’t have to be afraid of losing everything. We don’t have to be afraid of losing ourselves.

One of the most moving things for me about reading Ducks was something Beaton didn’t include in this book. In the introduction, a 21-year old Kate tells us: “I learn that I can have opportunity or I can have home. I cannot have both, and either will always hurt.” The men she worked with in the oil sands were so far from home that Kate couldn't tell if they'd ever be able to go back, to where they came from or to who they could have been there. But years after the time covered in Ducks was over, Beaton did get to move back again, to her hometown of Mabou in Cape Breton. She brought her husband with her, and they bought a small farm near where she grew up, where her parents still live. They have two children - the oldest is three, the same age as my own son. I think about all the songs that appear in Ducks, in English and Gaelic, about coal and fish and love and home. I know Kate will teach them to her kids. 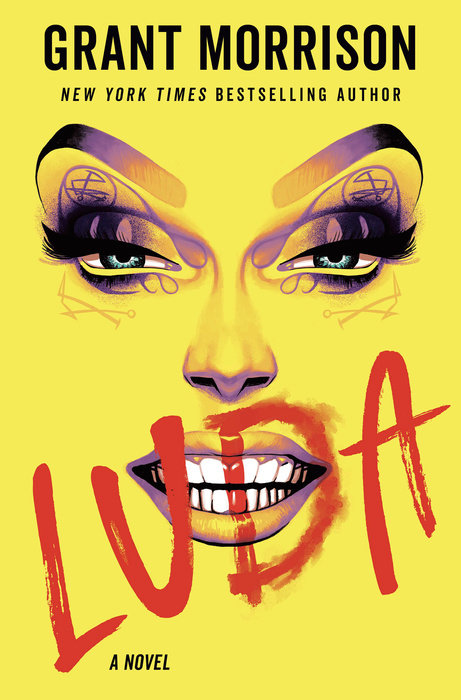 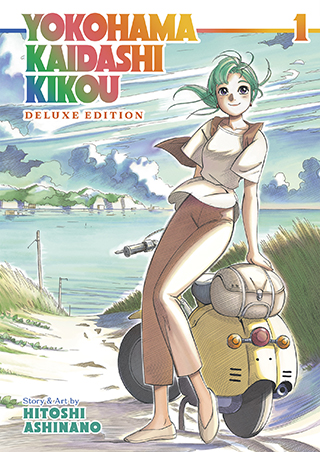