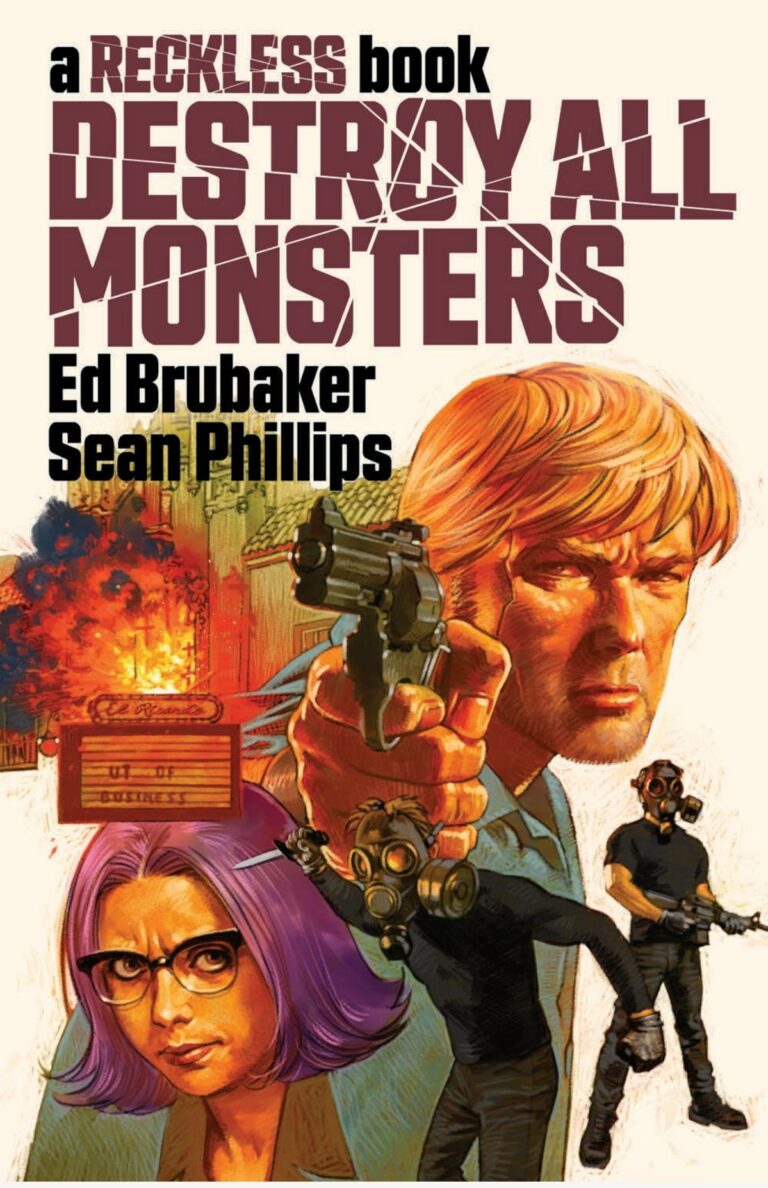 Destroy All Monsters: A Reckless Book

Here we are with the third installment of the Reckless series by Ed Brubaker, Sean Phillips, and Jacob Phillips within this past year. These are standalone volumes with a recurring lead character, Ethan Reckless, a recurring sidekick, Anna, and a recurring setting of Los Angeles in the 1980s, centered around an old movie house as a base of operations for the tough-guy antics of the protagonist.

Brubaker has stated that his inspiration for the Reckless series are the lurid crime paperback covers of the 1960s and 1970s with all the seedy, violent, sexy promise those covers held for readers. Ethan Reckless is not a detective, though he will conduct investigations for the right price, and he’s certainly not part of the law enforcement regime, though he does like to cause problems for the bad guys. He’s a troublemaker for hire, according to the press material surrounding these graphic novels, and he certainly finds his way into always seedy, quite violent, sometimes-sexy trouble.

Ed Brubaker and Sean Phillips have been working together to create crime fiction in the comic book format for over two decades, and recently joined by Sean’s son, Jacob, on colors, they produce solid, dependable stories, well-told and crisp. If they were less prolific, new Brubaker and Phillips comic might feel more momentous. They are, simply put, the consistently best producers of crime comics for the American market, and if we tend to underappreciate them in the grand comic book discourse it’s because we have mountains of issues of Criminal, Fatale, The Fade Out, and more to keep us distracted.

How is this new volume, Destroy All Monsters? It’s good, as you would expect it to be if you have read any of their previous collaborations. I think it’s better than the previous two Reckless installments, but that might be because I know the characters now and care about them a bit more. As a standalone book, it may not have that same impact, although it doesn’t rely on any plot points from the first two volumes. The set-up is clean and efficient: a blast of imagery from the climax of the story, where our protagonist faces dire jeopardy, then the majority of the story depicting how Ethan Reckless got to that point. This time, Anna, who plays the triple-threat role of sidekick, projectionist, and girl Friday, is more prominently featured, as we learn how she met up and befriended Ethan and landed the job at the movie house from which they launch their troublemaking operations. 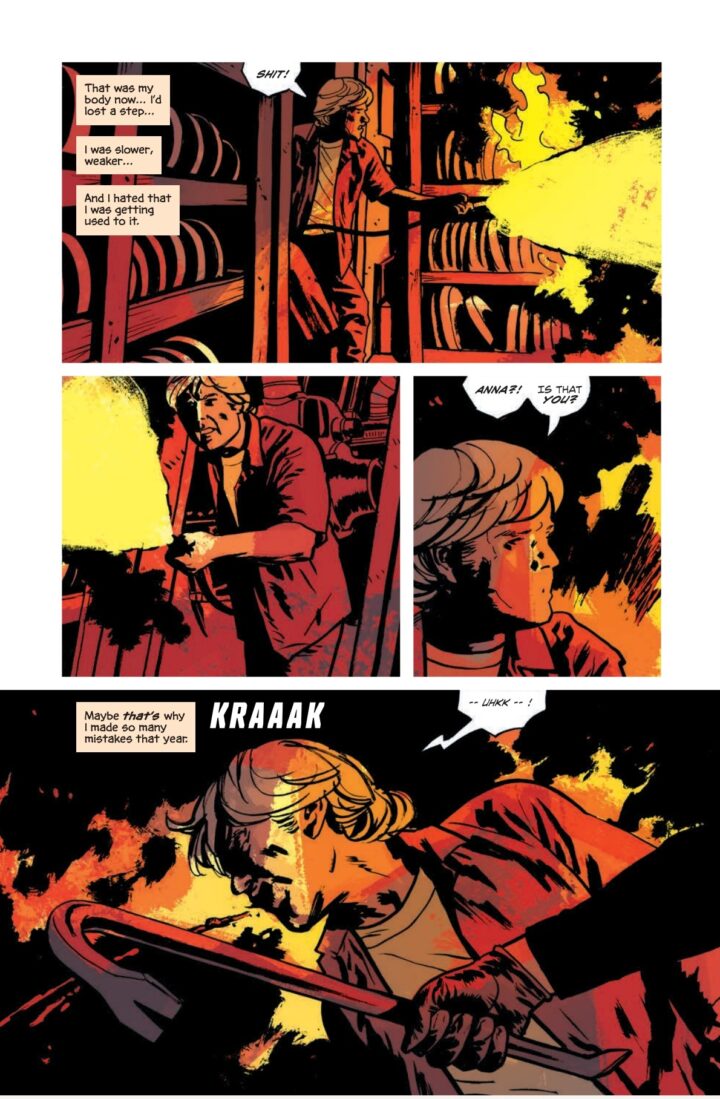 The movie house is ablaze in the opening sequence, as Brubaker and Phillips clue us in from the beginning that this story may not have a tidy happy ending.

Like the other two installments, Destroy All Monsters involves someone in need of help, though this time the investigation and danger is balanced by a growing divide between Ethan and Anna as they navigate their changing professional and personal partnership. Refreshingly, there’s no romance between the forty-something Ethan and the twenty-something Anna, as Brubaker and Phillips show their friendship strained by internal and external forces while they become increasingly immersed in the take-down of a corrupt businessman.

As with many Los Angeles noir stories, the plot revolves around a land deal gone bad and that’s the least interesting part of the story. Brubaker and Phillips don’t spend much time dwelling on deeds and titles and contracts and get right to the corrupted-heart of the matter: a bad guy did some bad things, keeps doing bad things, and Ethan and Anna need to catch him in the act to help out the person who hired them. It’s a crime story, so there are twists and turns and betrayals along the way, and all of it is in service of what novelist Jim Thompson said was always the story: things aren’t what they seem. 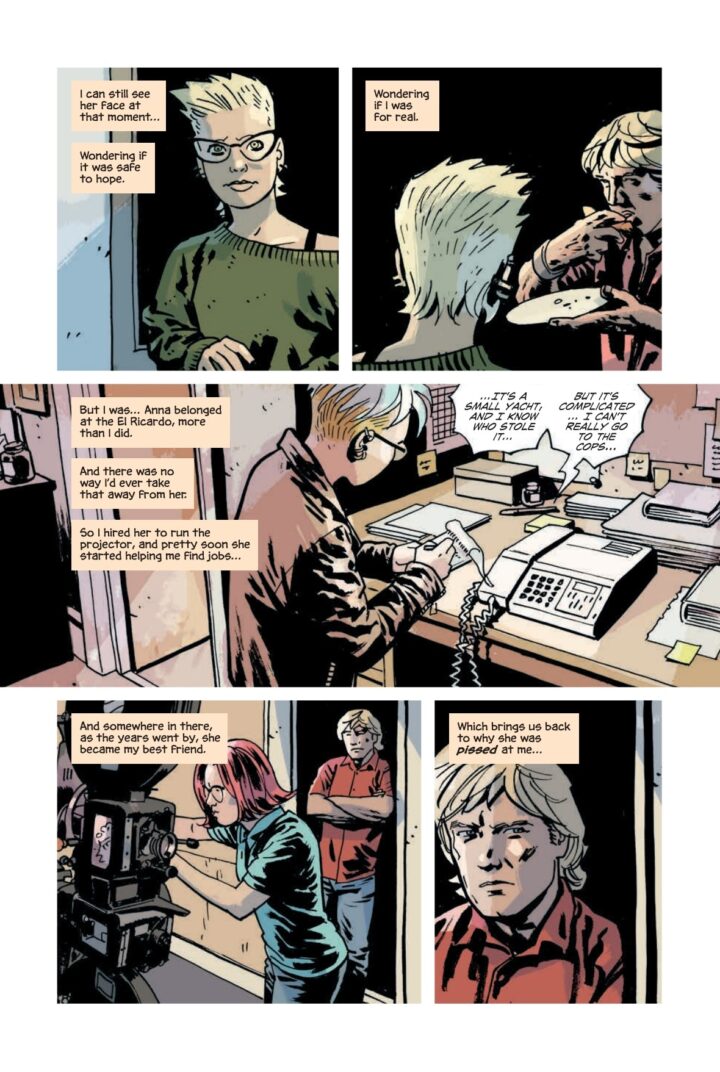 Brubaker and Phillips have been masterfully retelling that same story over the past twenty-plus years, and what makes the Reckless series a bit different than their previous work is how spare and direct it is. There’s no extra layer of narrative artifice here. This isn’t the Archie comics gang embroiled in murder and mystery like we saw in Criminal: Last of the Innocent. It isn’t Lovecraftian weirdness with a noir twist like Fatale. It’s exactly what you think it will be based on the cover imagery – violence, tragedy, and maybe some redemption. When I think of Reckless as a storytelling engine, I think of the cover of the first volume with Ethan Reckless wielding a hatchet. He’s a Hemingway man of action, and though he’s the narrator of the stories, he’s not particularly verbose. “The whole thing started because Anna was pissed at me,” Ethan narrates. Simple and efficient, just like the way he deals with problems. Like a Hemingway hero, and Hemingway himself, Ethan is also more sentimental than he’d ever admit.

But that’s about the extent of Ethan’s characterization, and it’s potentially a problem for the Reckless series. We have seen things happen to Ethan over the years, as shown in the first three volumes, but he’s still a cypher. He’s the least compelling part of each story so far, and though the accumulation of experiences might further develop him into someone we are rooting for, we still aren’t there yet by the end of Destroy All Monsters (when I said I care about the characters more by this third volume, I was mostly talking about Anna, and only a little bit about Ethan who is essentially a stone-faced plot-pusher). In a movie or television show, the charisma of the lead actor can make such a character work. Here, all we have are Ethan’s terse narration, and the chiseled and effective art of Sean and Jacob Phillips which tells the story beautifully but doesn’t give us anything in Ethan Reckless to fall in love with. 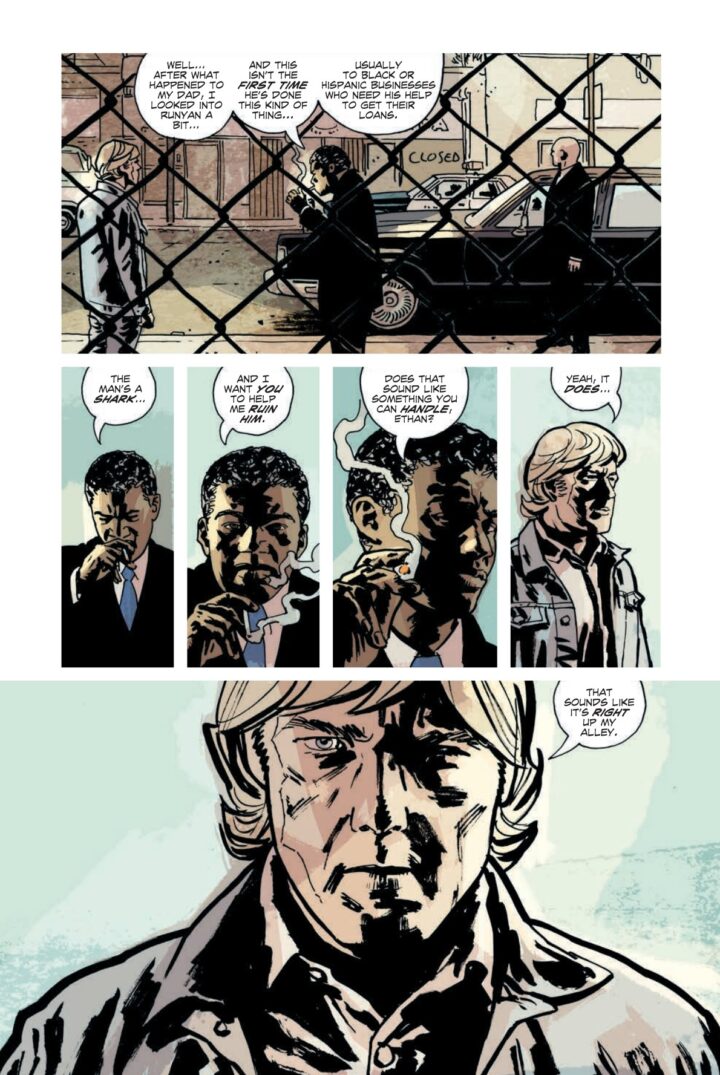 The cynical side of me reads the Reckless series as Brubaker and Phillips attempting to produce a commercial property that can be adapted to the screen. Everything about it, from its triple-burst release schedule as standalone volumes to its simplicity and directness in concept and execution to its almost hollow-and-easy-to-fill-with-an-actor lead character points to this project as something that might have ambitions beyond the printed page. I don’t know if that cynical reading has any truth to it, and I don’t ultimately care, but what I do know is that even if that is part of the larger plan for this series, Brubaker and Phillips are so skilled as comics-makers that there’s enough here to enjoy without considerations of life outside the panel borders. This is a crime comic produced by the guys who produce excellent crime comics on a regular basis. Surely that can be enough. 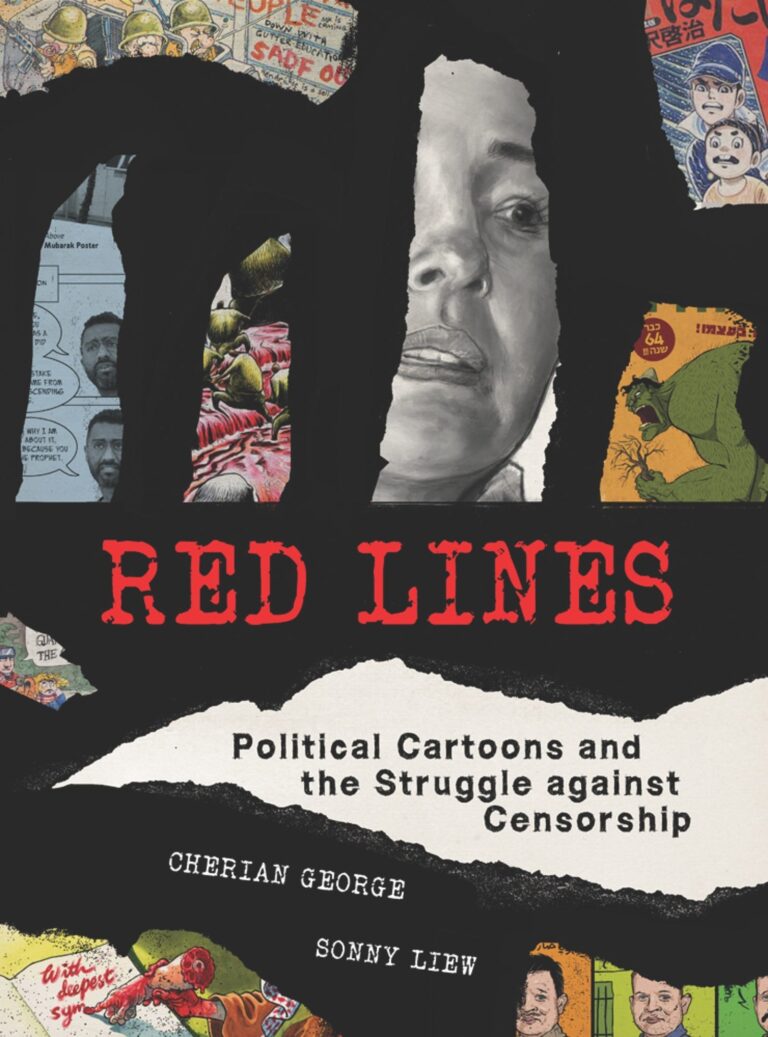 Red Lines: Political Cartoons and the Struggle against Censorship 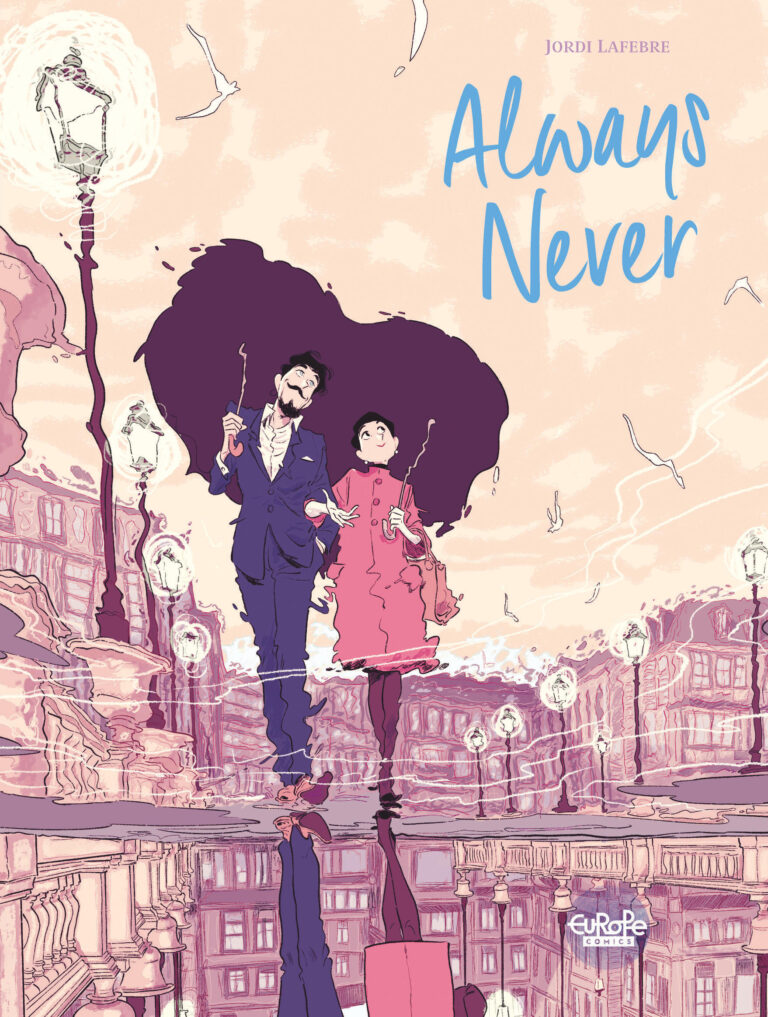