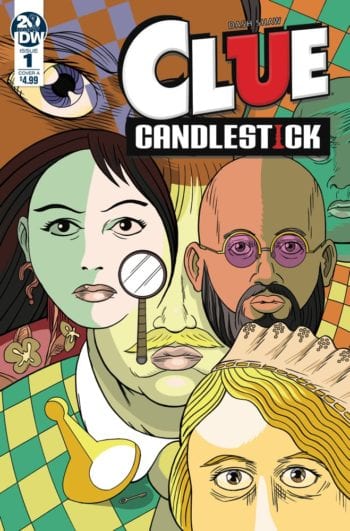 An ideal encounter with Clue: Candlestick #1 might involve discovering it in a dollar bin twenty years after publication. Already a curious aside in the bibliography of a celebrated cartoonist, Dash Shaw's board-game tie-in miniseries is likely to look even stranger as time passes and its context begins to blur. But here we are, only a few weeks after its release. Without the benefit of any back-issue-disinterment aura, Candlestick #1 sometimes reads like a comic for nobody--perhaps too odd for a fan of the game (or film) who stumbles upon it, perhaps too restrained for fans of Shaw's most ambitious works. But comics for nobody have an aura of their own, and Candlestick still illuminates Shaw’s skills as a storyteller.

The story begins as Professor Plum, an assessor of rare artifacts, receives a coded message from Mr. Boddy, a wealthy collector. Boddy, faced with anonymous death threats, has decided to host a dinner at his manor, and Plum is invited. Fellow diners include Mr. Green, Ms. Peacock, Ms. Scarlet, and Colonel Mustard, with Boddy's maid, Ms. White, in attendance too. The arrangement mirrors no one version of the game exactly. Shaw uses the surnames of Clue's "original suspects," but his character designs depart from that edition and from more recent ones. (He also improves upon the sweeping whiteness of most editions.) Boddy's dinner becomes a crime scene, with one of his guests shot and killed before dessert, and Plum and the remaining attendees must split up to search the manor for, well, it's in the title. 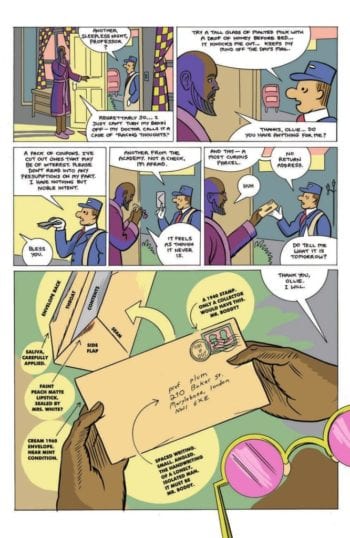 Shaw's cartooning throughout issue one is closest to his work in Cosplayers: a lot of flat colors and soft contours, a continued shift away from the ultra-thick linework of Doctors and New School. When the issue's at its best, a sense of play animates its pages. A murder mystery can accommodate a lot of weirdness--at least for a determined storyteller--and within a single issue, Shaw finds numerous divots along the path to 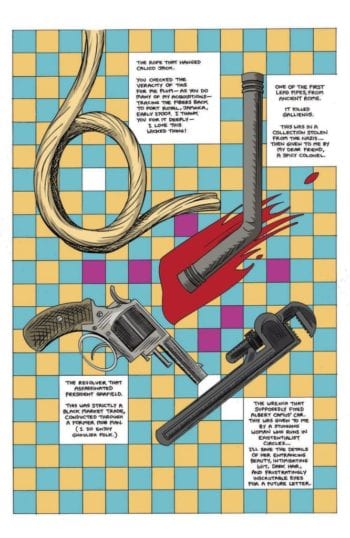 assassination and investigation. Early on, his choices complicate a reader's sense of time and point of view: the mail carrier who hands Plum his invitation seems to come from an older, more simply drawn comic; when the letter lists Boddy's favorite historical murder weapons, readers see them suspended against a game-tile background, as if the minds' eyes of Plum and Boddy have converged. Pages like these suggest an irregular amount of creative latitude for a licensed comic.

Shaw's stories have often brought together characters with clashing sensibilities and subjectivities, from the inter-family alienation of Bottomless Belly Button onward, and Candlestick’s pre-homicide dinnertime banter proceeds in kind. Writing Colonel Mustard, Shaw is as funny as he's ever been; the monocled ex-military man monologues to bewildered tablemates about the concealed motivations of inanimate objects and his frustrating dating life. Another memorable exchange comes later, as Ms. White recalls fabricating a knife collection in an effort to bond with her employer. ("What's your best knife?!?" Boddy asks, enthralled.)

When Candlestick #1 disappoints, it's in the comic's own struggle to bridge two different sensibilities. Shaw has always had a gift for distancing techniques and meta flourishes, but some of the story's more overt nods to the Clue board game disrupt the comic to no great effect. A winking formal choice like a color-coded, diagrammatic view of the dinner’s seating arrangement is less endearing in service to a licensed property; a reader is likely to wonder whether the comic was required to include it. When a later page replicates a full game board, here too, there's a creaky inevitability to the gesture.

Maybe this is the nature of the beast. By the measure of most comic-book adaptations of decades-old IP, Candlestick #1 remains cheeky fun, maintaining a particular vision and a surprising amount of distance from its board game referent. By the measure of Shaw’s best work, the issue is a minor comic, but the most reasonable readerly approach is probably to take Candlestick like an aperitif on the larger table he's been setting. It may read best in later days, as an oddball comics artifact, but there's little reason to deny an invitation in the meantime.

[Disclosure: One of the editors of this website wrote a short essay included in the issue.] 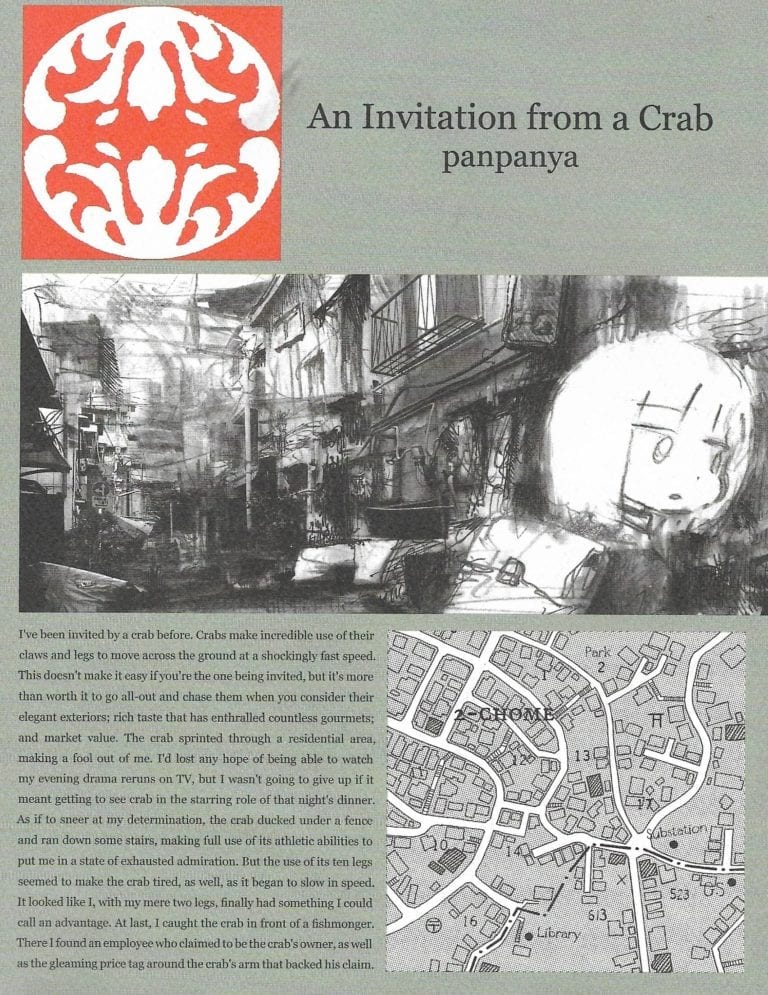 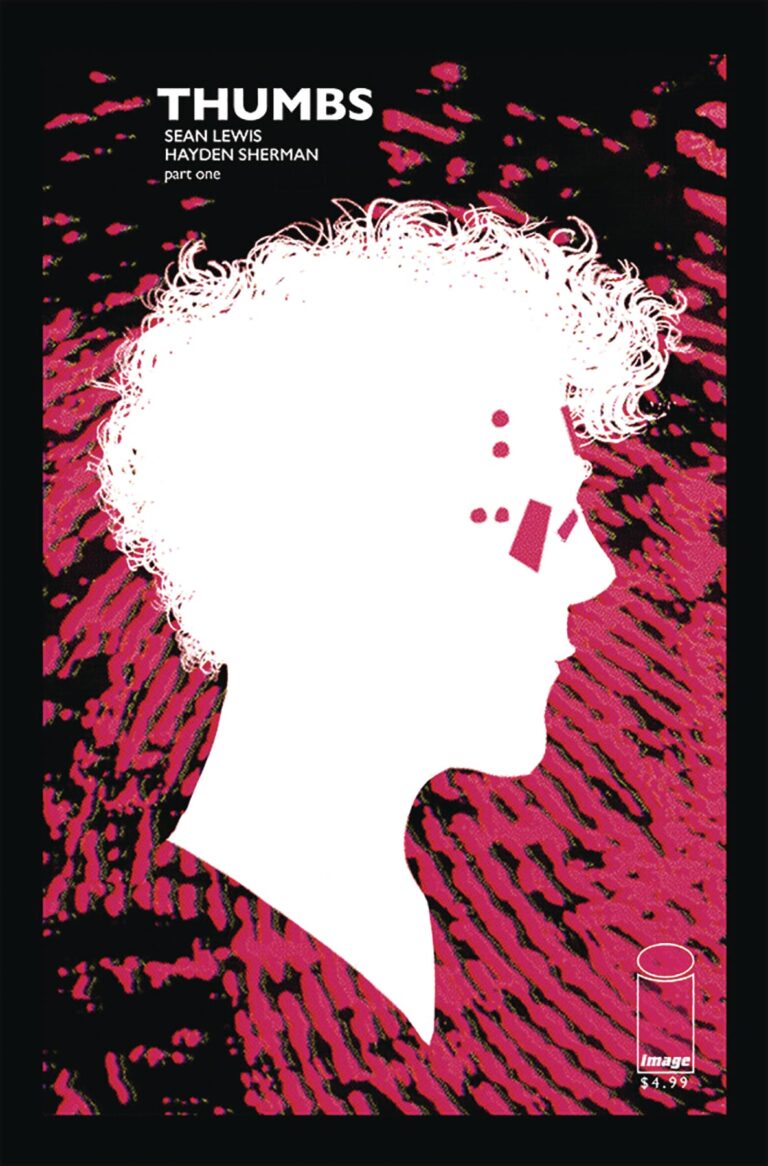