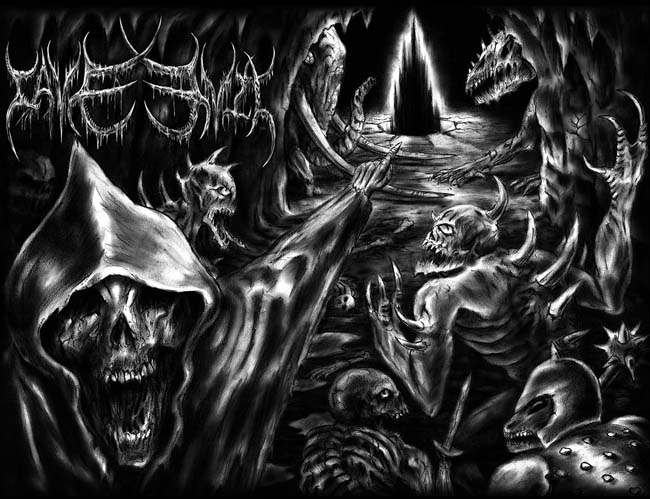 I met up with Zack Soto, Tim Goodyear and Farel Dalrymple last weekend to test play Cave Evil, a new board game designed by Mat Brinkman, Jochen Hartmann and Nate Hayden. Hartmann briefly discussed the origin of the game:

It was a sort of strange and chaotic yet also fluid process that led to the creation of the game. We basically had been talking about ideas forever, as early as 2003 from what I can remember. Not sure it makes sense to go into our initial ideas as some of them ended up not really making it into Cave Evil but will most likely result in other games or expansions. Essentially it felt that after an intense period of making this game out of nothing but random pieces of scrap paper it began to take on a life of its own and sort of developed from there.

I had already read through about 24 pages of basic rules to get ready for the game. I was a little worried that we might get together and then have no idea what was going on in the game. The setup was a little slow going and we had to keep the instructions handy all throughout the game. But after about an hour or so we started getting a sense of the game flow and the different strategies that could develop. 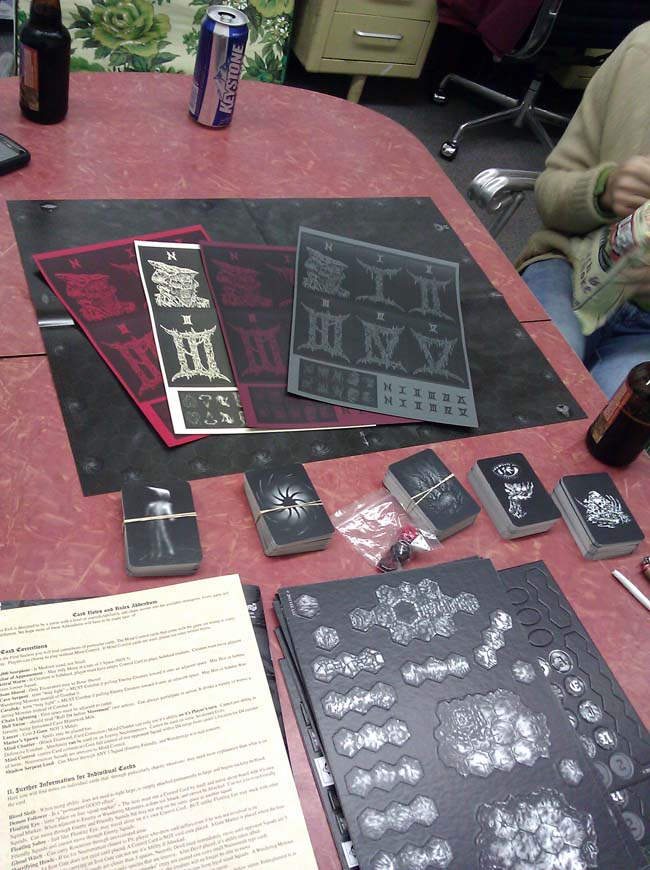 I read aloud from the manual as we set up the board and distributed the cards and playing pieces:

Cave Evil is a game of brutal elimination. Each player is an ancient Undead Necromancer vying to harness the power of the Pit, source of Infinite Shadow. Only one Necromancer will succeed. All others will be annihilated.

All the text and illustrations in the manual are very "black metal", which makes it pretty fun to read. Each player controls a unique Necromancer (chosen at random from the deck) with pretty much equal stats, but each one has a different special technique or ability that could be used once per game. My character was a Black Wizard who could split his form into two smaller Necromancers with half the power. Tim had a Rotten Magi with teleportation powers. Farel was a Psychomancer of Fire which could destroy everything within a range of one space. Zack got the Blood Sorcerer who had no special ability but could hold twice as many items as us and also he looked the coolest.

In a four player game you lay out the map with four separate lairs where each Necromancer starts. In each player’s lair is a Cthonic Crystal which is the source of their power. You win the game by either killing all the other Necromancers or destroying their Cthonic Crystal.

Each turn you conjure forbidden knowledge by drawing a card from the deck and adding it to your hand. These vary between badass demons, items and spells. But they don't really exist on the board until you invoke them, which requires a sacrifice of resources. There's three categories of resource: metal, gore and shadowflame. Another day, another gore-dollar. There are four conjuration decks to choose from: Bribe Deck (heavy in metals), Construct Deck (mostly gore), Summon Deck (larger and more magical demons), and Abyss Deck (chaos - no predicting what will emerge from the pit).

Chaos is a pretty central element to the game. When you conjure, you are pulling darkness from the Pit. This energy disturbs the entire cave and makes unpredictable things happen. These come in the form of Event cards that are pulled from the deck. If you pull an Event card you set it in front of you while you do the rest of your turn, then at the end of your turn you have to deal with the repercussions of the event, which can be good or bad. An event can cause monsters or treasure to spawn from pits and can totally mess with people's plans. Tim struck upon this wild card strategy early on in the game. By constantly drawing from the Chaos deck he would change the layout of the map, adding wandering monsters to the mix, forcing other players to rethink their goals. 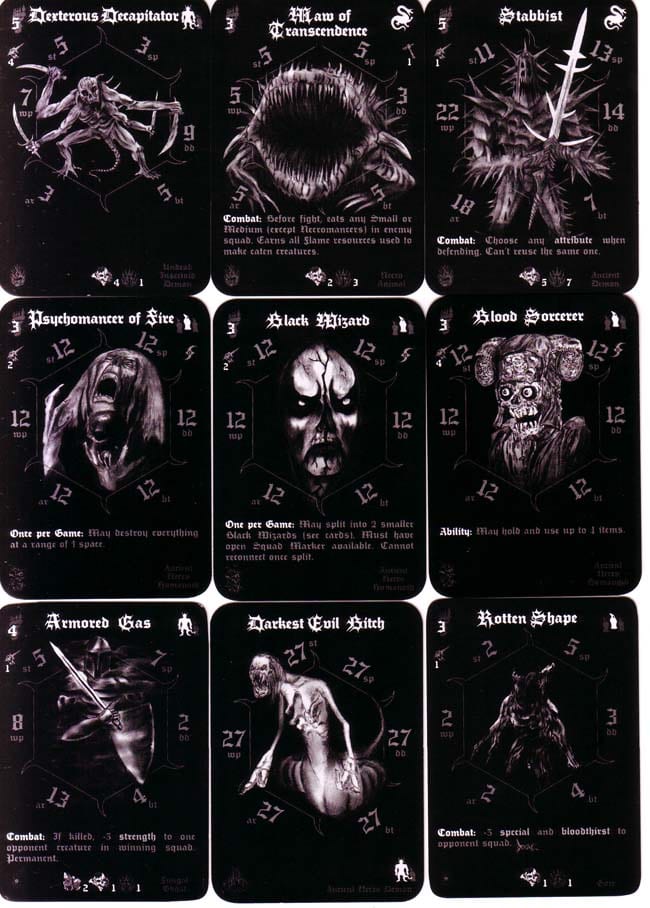 We spent a lot of time admiring the awesome artwork on all the cards. Most of the art was done by Mat Brinkman, but there’s also about a dozen other artists listed in the game credits. Each time we drew a card we'd show off the intense hellions and abominations at our disposal.

"Whoa dude check out this Bat Web. If Bat Web is killed, enemy must fight Bat Web again at double its strength."

After an hour or so we started to understand how the game works and we were having fun. We started building up our squads of demons and minions, equipping them with devastating weapons (Hell Hammer, Diamond Shield) and spells.

Now we were about halfway through the game. The game has a cool built-in timer that leads to an endgame scenario. Every time you invoke a creature out of gore, metal or shadowflame, you are messing with dark forces from the pit and the Blood Eye token advances one space forward around the board. When it reaches the end of the track, the ultimate evil emerges from the pit and hopefully you're strong enough at that point to deal with it. There's also a halfway point where the Evil Awakening is revealed but hasn't fully woken up yet, so you can adjust your strategies at that point to prepare for the final battle. There are a number of endgame scenarios which are picked at random: Pit of Infinite Shadow, Darkest Evil Bitch, Evil Black Old Goat, Darkest Statue of Death, or Eternal Evil Emperor.

We drew the Darkest Evil Bitch:

An Ancient Mother of a million murders, this Serpent Demon is unborn from an egg fertilized by Shadow Lords and delights in using her knowledge of the blackest arts for insidious assaults.

One-by-one she targets each Necromancer squad, starting with the weakest, and combats them. It's basically one on one combat. Your other squads: "are enchanted by the strange and horrific beauty of the Bitch and refuse to fight her."

So we got our butts kicked. No one won, everybody died. I think what happened is once the game got real we all focused on building our squads and strength, but we waited to long before attacking other players. We were too timid, afraid to go into battle against our opponents increasingly intimidating squads. In gamer lingo this is known as 'turtling'. 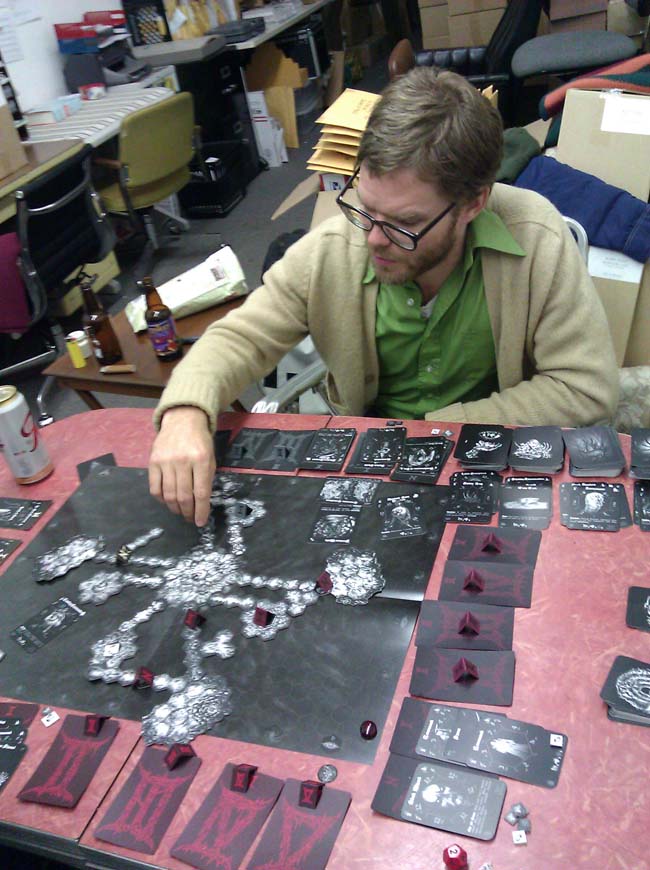 Farel was one of the first to stray far from his lair and one of his squads got annihilated by a wandering demon. I was the first to attack another player. Zack’s Insanity Demon was terrifying to face in close combat, but I had some ranged weapons and destroyed it from a distance. For the next game I think we need to start out more aggressive because it'll actually be faster to gain resources and weapons by simply collecting them from your defeated opponents. I suspect this is the only way to prepare for the Evil Awakening.

I haven't really gone into detail on all the combat mechanics, event cards, excavating new passages in the cave, but I can say all those elements seem really well thought out and tested. Once the game gets going I realized that it feels just like entering a Mat Brinkman comic. You get to be a demonic Necromancer stalking the caverns and catacombs of much darker Multiforce, with endless possibilities and hundreds of characters to encounter. When you're just looking at the box and you haven't experienced the game, I can see some people hesitating at the $70 price tag. But consider what you would pay for a new Mat Brinkman book combined with what you'd pay for a new PS3 game. Also the game itself is limited to 500 copies. I recommend picking one up before it sells out.

Thanks to Tim Goodyear and The Bad Apple for hosting this fine night of gaming. Would Necromance again! 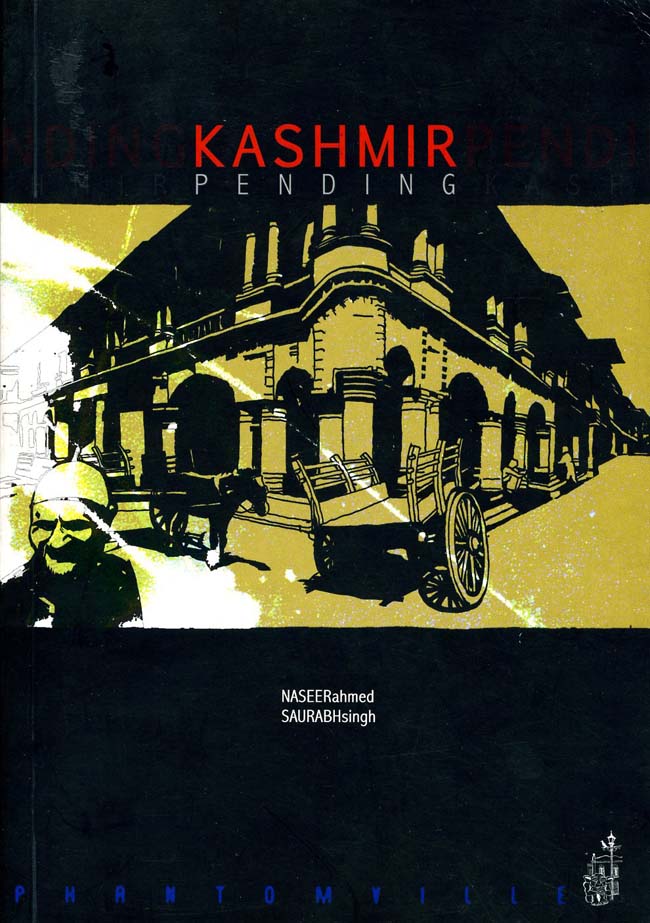 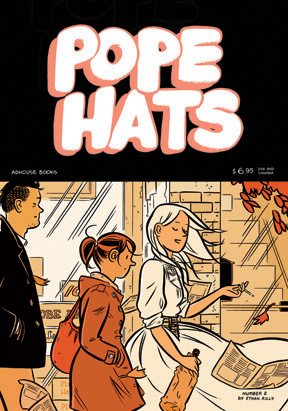