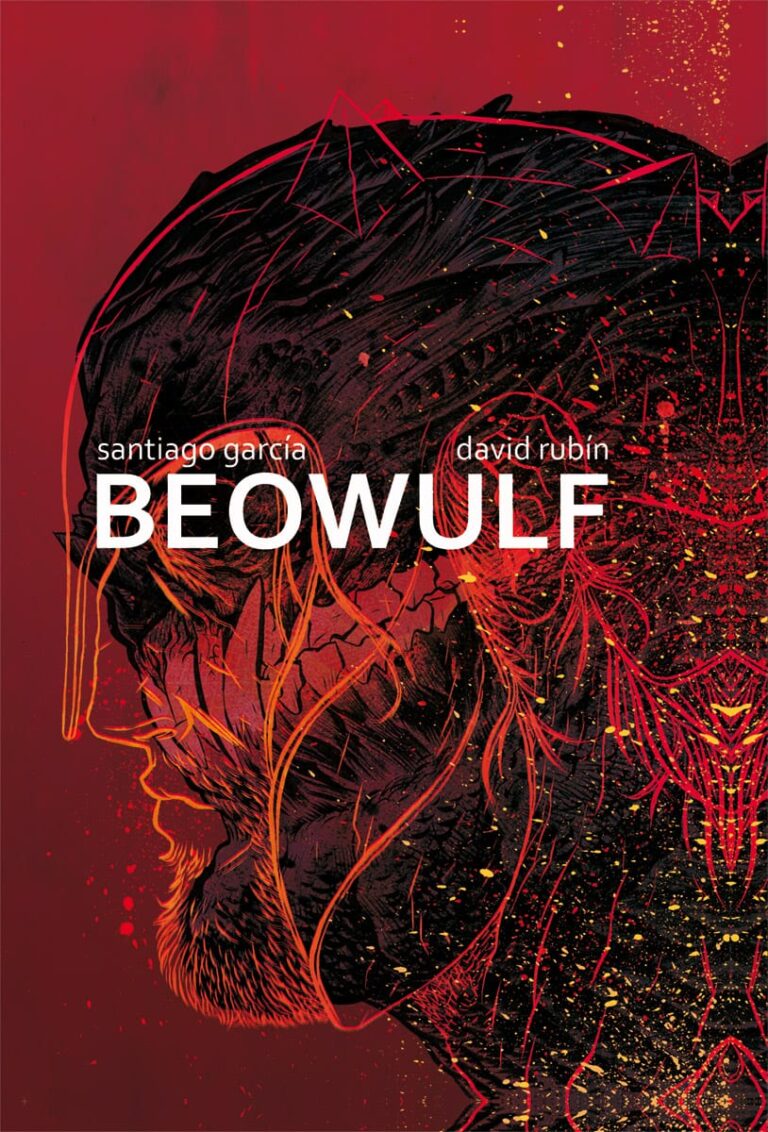 Santiago García and David Rubin’s graphic novel is not the first comic adaptation of the Old English poem Beowulf, nor will it likely be the last. This latest iteration is, however, the most adventurous. Previous adaptations—i.e. those by Gareth Hinds, Stefan Petrucha and Kody Chamberlain, or Stephen Stern and Christopher Steininger—are far tamer, both in violence and creative exploration. While past adaptations vary in artistic style, all adhere to a fairly standard comics layout and often border on functioning as nothing more than illustrated transmutations of the original poem. In contrast, much like the eponymous Scandinavian hero himself,García and Rubin prove themselves more adventurous.

The reason behind the extant proliferation of Beowulf comics is perhaps two-fold: 1) the poem’s canonical status in Western literature, and 2) its slew of monster battles inclines it to American comics, a medium that gained notoriety primarily through portraying super-human confrontations. Somewhat expectedly, battle sequences between Beowulf and the poem’s monstrous triptych litter García and Rubin’s 200-page graphic novel. Some readers may suspect such blood-and-guts action simply panders to the basest sentiments of a mass audience. After all, the comic contains enough loosened organs and blood to make Frank Miller’s 300 appear conservative. But Rubin’s innovative art wards off such judgements, capitalizing as it does on the comic medium’s potentialities. 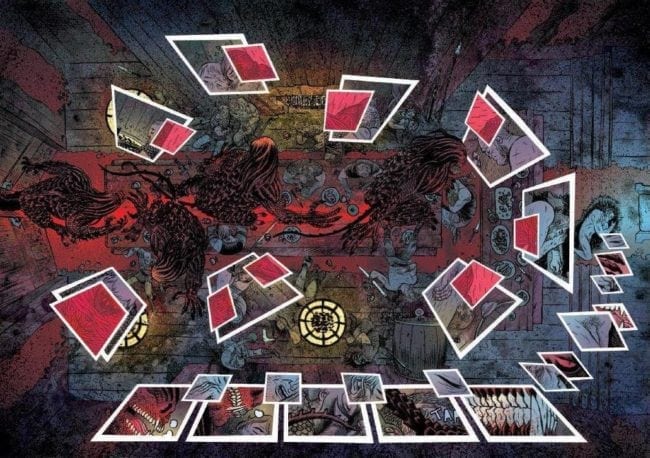 For example, take Rubin’s two-page, bird’s eye view illustration of the monster Grendel lurking through the Danish mead hall at night, hungrily eyeing soldiers before his battle with Beowulf. Within this two-page spread, Rubin situates smaller, full-color panels along Grendel’s path to visualize what readers might see were they standing in Grendel’s position. Alongside those panels, Rubin presents even smaller, though red-tinted, panels to illustrate what the monster Grendel sees as it lurches through the hall. In one drawing, then, readers find a time-lapsed layout, the human perspective from Grendel’s standpoint, and Grendel’s own point of view. Rubin employs this technique of multiple perspectives throughout the whole comic, taking advantage of the comic medium’s fragmented nature wrought by the panel to present diverse perspectives (and even temporalities) within and alongside one another.

In fact, inset panels appear to be one of Rubin’s favorite techniques, and he utilizes them for more than representing multiple perspectives. Another two-page spread, this one depicting Beowulf’s entrance into the Danish village, is similarly splattered by a multitude of inset panels. This time, however, each panel highlights a different detail of the larger scene, e.g. villager eyes, crow wings flapping, a dog’s growl, etc. Rather than represent these myriad details inside a single large image, Rubin cordons each off into its own panel contextualized against a sequential backdrop. The technique allows readers to absorb the whole event of Beowulf’s advent while drawing attention one-by-one to its disparate details. People typically focus upon details one at a time, and splitting details up into individual panels mimics that focalization inherent to lived experience, thereby helping to recreate Beowulf’s sensory world. Whether employed to focalize details or represent diverse perspectives, Rubin’s use of inset panels often helps immerse the reader further within the story. 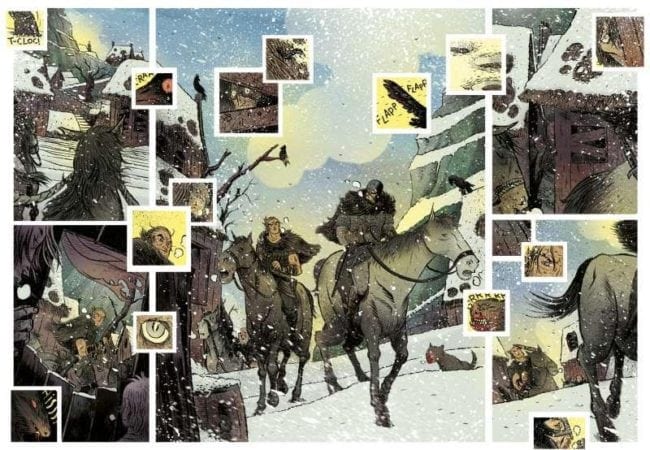 As with any adaptation, the authors of this edition take a good deal of creative license. Overall, their efforts are laudatory. But one particular artistic liberty has been imprinted onto my consciousness, and I cannot shake it. It haunts me to the point that I will never be able to talk of this comic without bringing it up. The liberty in question is García and Rubin’s injection of an unexplained eroticism into the Grendel-Beowulf battle. In the comic, as Beowulf sleeps commando style among Danish soldiers in the mead hall, Grendel lurks inside and stumbles upon the Geat hero. Grendel sniffs Beowulf and touches his genitalia, prompting Grendel’s own erection. Grendel readies to feast on Beowulf (literally, not sexually), but is stopped by the hero waking to leap upon the monster as the latter ejaculates. Battle ensues. Grendel dies. This voyeurism turned sexual assault is entirely García and Rubin’s addition. It exists nowhere in the Old English poem.

The sexual addition is not a problem in itself. The problem is that this addition is never made a part of the story in any way. If García and Rubin want to add this sexual nuance to the Grendel-Beowulf battle, that’s all well and good. But in taking creative liberties with an adaptation, any alteration should be justified, meaning it should be significant to the adaptation in some way. As it stands, Grendel climaxes onto Beowulf and the story moves on. Beowulf shares no similar sexual encounter with either monster or human, and the sexual occurrence never develops into any larger motif or theme. Grendel’s sexuality could be removed, and the story would not change. It’s an irrelevant addition.

Ironically, that irrelevance magnifies the addition into more than it need, or even should, be. Elsewhere, the comic suggests Grendel only eats humans. But does Grendel actually harbor macabre sexual desires? Is this nuance meant to demonize Grendel by transforming him into a site of sexualized cannibalism? Or is it meant to humanize Grendel via an “even monsters want companionship” sentiment? Does it function as a veiled critique of homosexuality? Are García and Rubin playing off the scholarly tradition of interpreting Beowulf and Grendel as foils of medieval masculinity? Is this just low-brow humor? All these interpretations are possible, but the graphic novel never offers any reason for considering one over the others. So what is the purpose of adding it? Do García and Rubin intend to magnify this singular sexual addition be leaving it unexplained and irrelevant? Am I meant to obsess over it? Have they added this jarring image of Grendel ejaculating onto Beowulf to arouse attention of my prudish sensibilities, to disrupt the American taboo on sexuality? Are they offering a nihilistic critique of comics criticism by teasing the critical impulse to find meaning inside the most insignificant details? See how much of this review dwells on one minor image? It shouldn’t, but it does. The irrelevance of this one inexplicable image makes it the one feature of their graphic novel I will never forget, and the first thing I will always mention when referencing the comic in conversation. In fact, I’ll probably mention the comic just to talk about that single image. I don’t know whether that makes García and Rubin insightful marketers or poor adaptors.

Nonetheless, that this one image is my primary criticism against García and Rubin’s Beowulf adaptation may actually testify to its overall quality. The Beowulf narrative is essentially a quasi-divine man’s conquest of three monsters, and a story like that can easily divulge into cheap theatrics fueled by blood-and-guts thrills. In contrast, Garcia and Rubin have produced a visually stunning and innovative adaptation of what could have easily been a stock comics narrative. Their graphic novel is worth reading, not only as the adaptation of an Old English epic, but as a beautifully executed comic on its own. It is, in this reviewer’s opinion, the best comics adaptation of Beowulf to date.