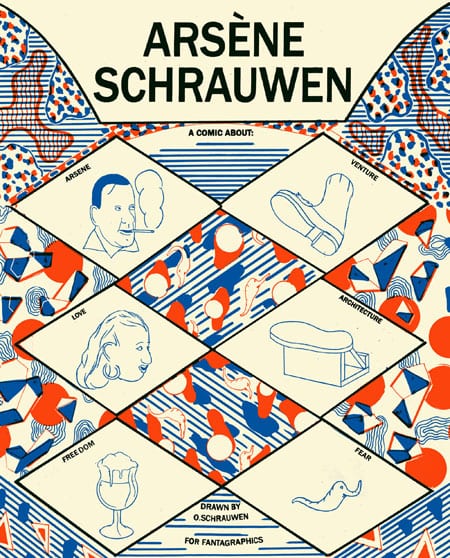 For many of us, the most interesting thing about our grandparents is the role they played in bringing us into being. Viewing history through the narcissistic lens of the present, we care only about what brought us to where we are now, and it is our burden to undo the damage of any mistakes that have been made along the way. Arsene Schrauwen begins with author Olivier Schrauwen addressing the reader to say that this book is the story of his grandfather, and then he cedes the story to young Arsene, alive in 1947, boarding a boat to embark on a colonialist adventure.

This is not necessarily a true story. There are bits of fantasy forthcoming that point in the direction of it being wholly fabulist. The facial features Arsene is shown to have in common with Olivier are really only features in common with the simplified self-portrait of the author, which a reader may have seen in his mini-comic Greys (published by Desert Island in late 2012), in which Olivier, assuming autobiographical comics' supposedly straightforward candor, claimed to have been abducted by aliens and shown a history of Earth that ended with a terrorist's stealing a black hole from the CERN hadron collider. We should not mistake the depiction of an an event for reality, or the map for the territory.

We should also remember that our ancestors were, while alive, both larger and smaller than the context of a historical moment, and the subjects of their own stories of human folly, which often have nothing to do with any offspring they may have gone on to produce. In Arsene's story—as presented here—he travels to Africa to build a theme park, and then, through romantic foibles, the naif who embarks on adventure comes of age, a bit. Still, the truth remains that, if the story is true, Arsene's story does not end when the book does, and the actions it describes carry forward in time, to in some way make the future we now live in, whether by design or accidents of insemination. 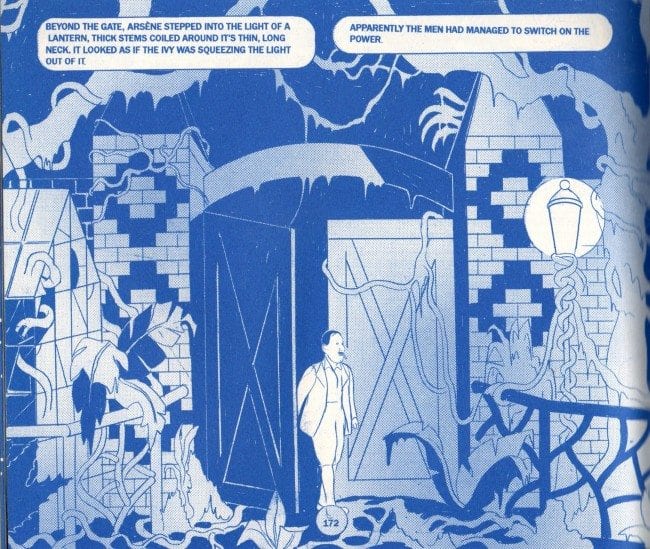 Half of Arsene Schrauwen's ink is blueprint blue, perhaps in the spirit of its titular character's architectural aims. Schrauwen- the author, not Arsene- previously explored colonialism in his short story "Congo Chromo", found in the 2011 collection The Man Who Grew His Beard, and did so with a much wilder color palette. This newer book collects self-published work printed on a risograph machine, and primarily sticks to blue and a complementary orange. Perhaps owing to registration issues, these colors rarely overlap within the same image. Instead the effect is milked for the visual blowouts here—and there are many—in one color, as seen through tonal variations of light, shadow, and tone, all delineated by the thin clean line that is ubiquitous throughout the book. Schrauwen's drawing here, technical and clean, is reminiscent of comics artists like Yuichi Yokoyama and CF. For those who've seen earlier work like the Winsor McKay homage "My Boy", an implicit continuity of influence becomes identifiable, one which moves through Moebius to end up at this point of pristine clarity that, for all its beauty, seems in some way unstylized and unaffected. The restrained color palette can be thought of using the words of the narrator: “His 'stage act' was minimal; it consisted mainly of shifting his weight from one leg to the other, and then back.” Alternately, if blue signals the cool of schematics, then orange as opposite could allude to the heat of the sun as felt in the colony, and as these tones alternate themselves, and are superimposed upon each other, what's conjured up are unearthly dreams that fall in and out of focus as a geometrically-minded will tries to impose itself upon the wild and unfamiliar forms of organic growth.

Sayeth the narrator: “Grandad's familiarity with modern architecture was minimal. He experienced everything in the wide-eyed, open-mouthed manner of a child; as a spectacle of light and color, forms and shapes.” Within the book's spaces, marked by pattern and line, we see a hammock dissolve into strands of itself, arcs of white across a blue page. Things dissolve and resolve, from collections of shapes into cartoon iconography. A penis becomes a bird, Arsene appears as an ass. The forking branches of trees can have any shape projected onto their curves. Characters' heads are but blank spheres until the features of faces have reason to be noticed, and from this design decision, an approach to characterization follows: Each character exists in a space between the fleshed-out literary figure, rich with inner life, and a cartoon character with a set of behaviors that exist only to delight the viewer. Arsene is fairly simple-minded; each character's life is a blank to the others. Upon his arrival in the colony, Arsene is not recognized by the cousin who invited him, who in the ensuing struggle is depicted without a face. This cousin is later shown having a homosexual affair, but whether his wife is aware of this as she pursues her own affair with Arsene is unknown. Arsene, for his part, shows no hesitation about falling in love with this married woman. No one speculates as to the motivations of one another, and everyone's motivations are fairly base and predicated only by what is in front of them at any given time, with their understanding of each other consisting mostly of projections.

Arsene at a few points writes poetry, but his meanings are either misunderstood or ignored. In the first instance, the imagery he chooses is taken literally. After writing, “If there is one thing I want in this world, it is to hold you, beautiful flower,” while thinking of a woman, he is rewarded by an unintended reader with the gift of a flower atop his desk. He turns it over, imagines the woman he loves, then writes a note requesting cigarettes. These are funny jokes, in a lonely world.

It is again the world of men, as it was with The Man Who Grew His Beard, and "My Boy"'s single father. There are dick jokes aplenty, although each is a sort of formalist cartoon. Schrauwen shares with Ruppert and Mulot a sense of humor that is casually vulgar while attuned to the deliberate mechanics of comics so thoroughly that all gags read as thoughtful. What this demands of the drawing is that human forms be abstract enough to be malleable, while still possessing a unsimplified approach to full-body anatomy, so that any distortions can be registered smoothly. The guffaws these gags elicit short-circuit the brain in a way that, even when not laugh-out-loud funny, points to potentials of comics the reader had not previously imagined. Here, when one man begins to masturbate another, and Arsene is mentioned conversationally, this interruption to the action is conveyed in Arsene's face appearing on the penis's head. The subsequent ejaculation marks a segue to a chapter where Arsene's cabin is inundated with floods of rain. At the same time, the way this group of drops is depicted harkens back to an earlier scene, where Arsene, afraid to enter into a pool and reveal his own erection, is splashed with water from the pool by the same character who's later shown doing the masturbating. In the following panel we saw offered up for delectation an eclair dripping custard from its meatus. 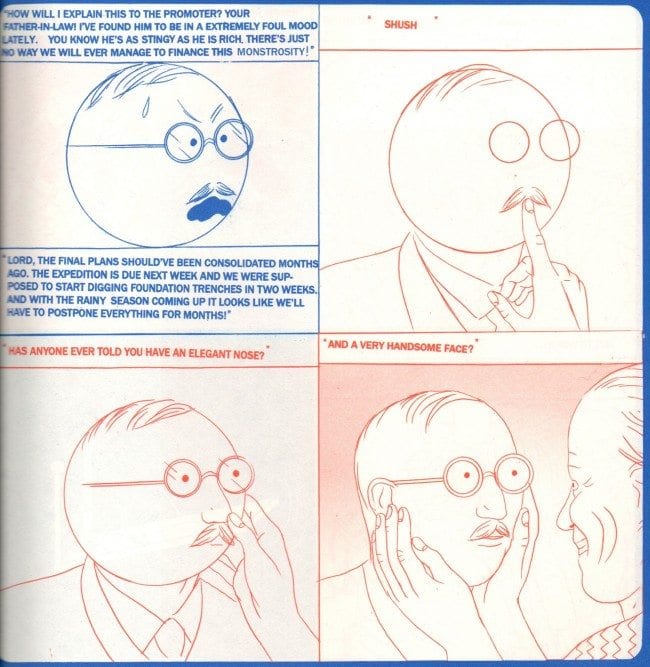 This language of the gag is perhaps meant to implicate some insecurity. The rain that keeps Arsene in his bungalow, following the scene-segue ejaculate, is described in terms of sliminess, which he relates to “elephant-worm,” a foreign species that will swim inside a person's orifices through the medium of water and deform a body. Later, the man who told Arsene about elephant-worm is revealed as the father of the woman he's in love with, and for a second time he tells Arsene to zip up his fly. If we are to try to view this book's storyline symbolically, seeking a key by which to decode a secret narrative, it is worth noting also that Marieke, the love interest, is likened twice to a lock: Her silhouette appearing as such in an early scene, and her body being glimpsed through one later on. The book's own multivalent sense of symbolism places the image of a key and ties it to Arsene's penis, and perhaps that is the key to the whole book, including its conception. Which is to say: Is this the story of how Olivier's father came to be? (The shared surname of author and subject speaks to a line of patrimony.) When Marieke is revealed to be pregnant, is Arsene the father?

Within the narrative we see a disjunct between a map that serves as guide to the jungle and the jungle itself. An earlier scene has a set of written directions that reduce the environment around Arsene into nothing but language. Meaning-seeking of this sort may miss the point. However, when Arsene abandons his map, and the woman who guides him, to follow his intuition, he becomes lost in the jungle, and disaster befalls him and his men. Arsene may or may not be a stand-in for the reader, but we certainly enter into his world through the book. Perhaps the point of the story is only to teach you how to read it. Is this what life is? That is what the sort of jokes Schrauwen tells seem to suggest.

Consider that Marieke's vomiting, which is explained by her pregnancy, occurs the morning immediately following Arsene's first sexual encounter with her. In real life, morning sickness would not take effect so rapidly. But this is not real life: It's a comic book that explicitly calls attention to its own symbolic language. However, the very act of reading the situation this way, with this simple-minded projection of a young man's anxieties, in itself may be what leads Arsene to the maturity to go back to Europe and begin a family, with a woman not currently married to somebody else, in a story that would fall outside the purview of the book's pages. Alternately: Arsene conceives a son in the jungles of Africa and then abandons him. And it may not matter, because the whole book might be a work of fiction anyway.

This could be the story of Olivier's father's conception, or it could be wholly the conception of Olivier's, and the story being told could have emerged from formal methods and be in some way incidental to its own existence. If the orange and blue that can scarcely intersect emerges from the limitations of the risograph suggests an alternation between the two, and the blue in turn leads to architecture, that these two colors can be in some way reconciled and lead to creation perhaps suggests a tale of women and men, consummation and procreation. For a formalist like Olivier Schrauwen, Arsene's entire story could emerge from the technical limitations he's given himself to work with.

The cover of the book lays out its themes as a grid of words and abstracted illustrations for them. “Fear” is an elephant-worm. “Lust” is depicted as a key and a lock. A blank space illustrates the book's assertion that it is about “Nothing.” There is one blank panel within the book itself, in a moment where Arsene faints, an instance too short to be the Nothing the author suggests the book's about. Perhaps instead what is being suggested is that the book emerges from an unconsciousness as pure as what's found in the prenatal. 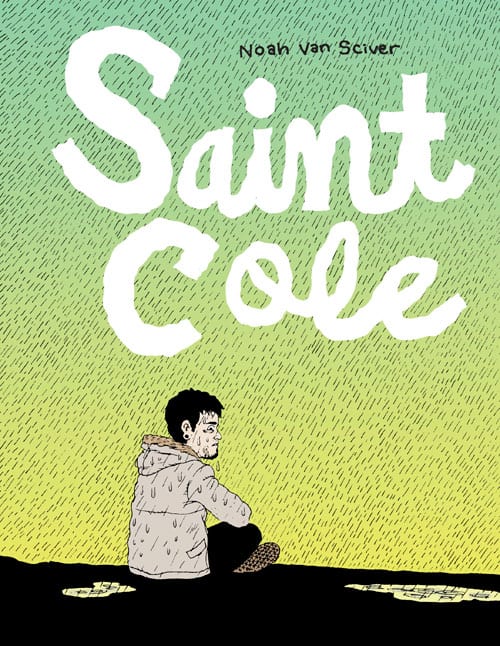 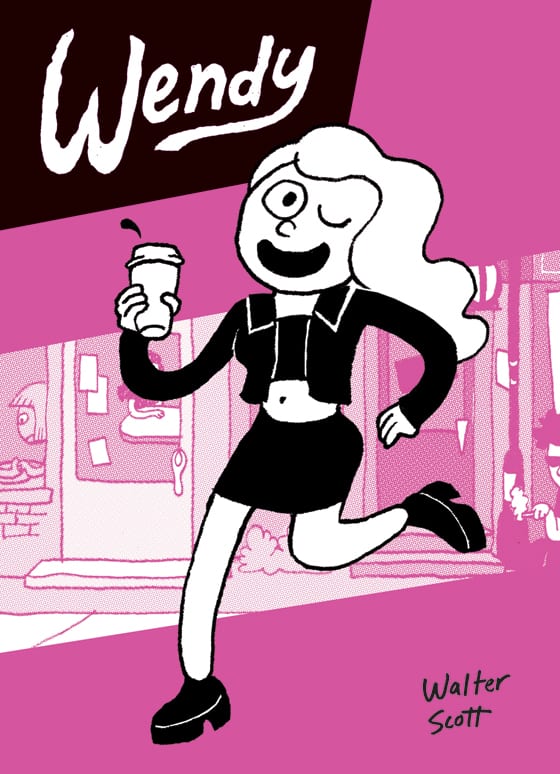