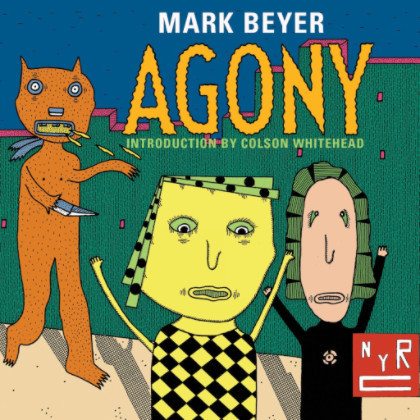 Most of us have at one time or another suffered from the nagging suspicion that the universe is out to get us. Or -- even worse -- that our suffering, whether brought upon by malevolent forces, just plain bad luck or random occurrence, will never end. That will always be just one damned thing after another, ad infinitum.

Which is exactly what makes Mark Beyer’s work so appealing and funny. Beyer takes that self-absorbed conceit (because, really, the basic cri de coeur of this type of angst is “why me”?) and expands it to absurd levels on the comics page, using his grotesque and at times primitive art style to create a hellish and unrelenting nightmare for his protagonists, where the basic question isn’t “will things ever get better” but “what type of misery awaits us around the corner?”

That’s the central notion, at any rate, behind Agony, Beyer’s superb graphic novel, originally published by Raw Books in 1987 and now available once again all these years later thanks to the New York Review of Books’ new comics line. 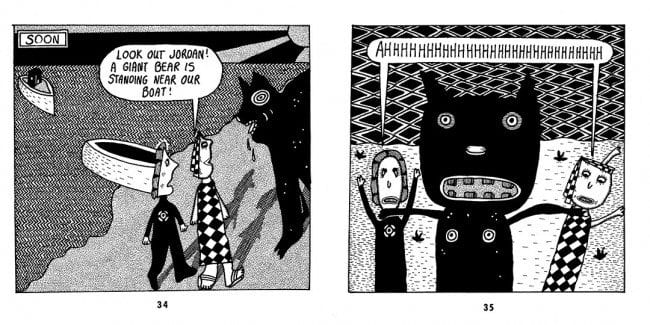 There’s no plot, per se, in Agony, just a series of hazardous events that eventually stop. The main characters, Amy and Jordan, lose their jobs, are attacked by bears and indigenous people, contract horrible diseases, end up in jail, see bad movies, are threatened, tortured, assaulted, insulted and much, much more. Not necessarily in that order.

Everything the couple does to turn their fortunes around results in more hardship. Even attempts at altruism are for naught – when Amy attempts to help others by flinging money out a window, it results in a homicidal stampede (detailed in the Mourning Call newspaper, natch). 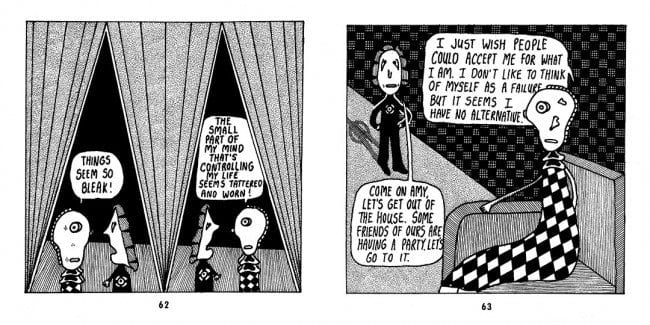 Even death is not a reprieve from the constant stream of despair and cruelty. Early on, Amy has her head torn off by a mysterious creature, but Jordan manages to retrieve it and get it sewn back on by seemingly competent doctors. They survive horrible falls and ridiculous illnesses (at one point, Amy’s head swells up to the size of their apartment) only to revert to normal once more, ready for further punishment in the best cartoon character fashion. At times it seems as though Amy and Jordan don’t inhabit our world but some horribly punitive afterlife, forever chastised for unknown sins committed in the world of the living.

With the constant abuse and misery, it’s no wonder that Amy and Jordan occasionally give into despair or contemplate suicide (“Maybe if we’re lucky someone will strangle us in our sleep”). Hope springs eternal, however, and it’s notable that more often they attempt to convince themselves that good times can eventually be had, either by sheer luck or self-improvement. Jordan often spouts tired self-help phrases, though how much he actually believes the cliches he utters (“All we can do is to just keep trying to improve ourselves. We’ve got no other choice really.” “It’s very important that we try to make something out of our lives.”) is open to interpretation. 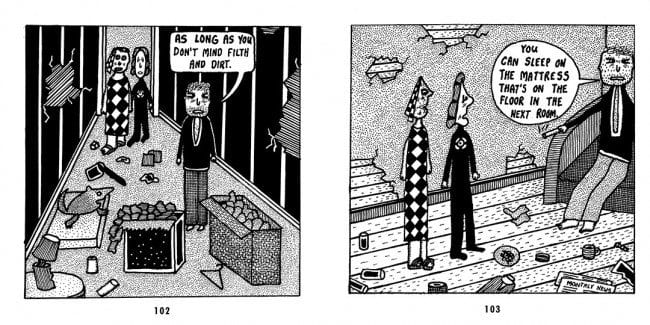 It’s worth noting that the lion’s share of the misery seems to fall upon Amy’s shoulders. If there’s a flesh-eating disease or homicidal maniac waiting to pounce, rest assured it will pounce on her first. It doesn’t help that Jordan is usually less than sympathetic to Amy’s plight. “I just want you to know that I don’t blame you for making us go on this trip,” he says to her at one point after she has just spent a panel vomiting blood. Upon hearing that she might suffer serious mental problems after one assault he quips, “She’s always been disoriented and mentally confused. It doesn’t sound so bad.” Whether Beyer is making a statement about the general treatment of women in America or just pushing the “Perils of Pauline” aspect of the story to the breaking point is a question I’ll leave open for debate.

Beyer is able to capture late 20th century angst and anxiety – urban or otherwise – in such pitch perfect fashion that it’s a shame he hasn’t found more places to publish or an audience more accepting of his dark comedic viewpoint. Here’s hoping the re-release of Agony Beyer affords him the opportunity to get some new comics out to the public. I’d love to see his take on our current, overly plugged-in culture. 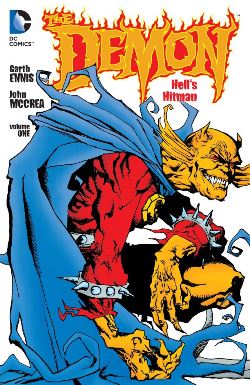 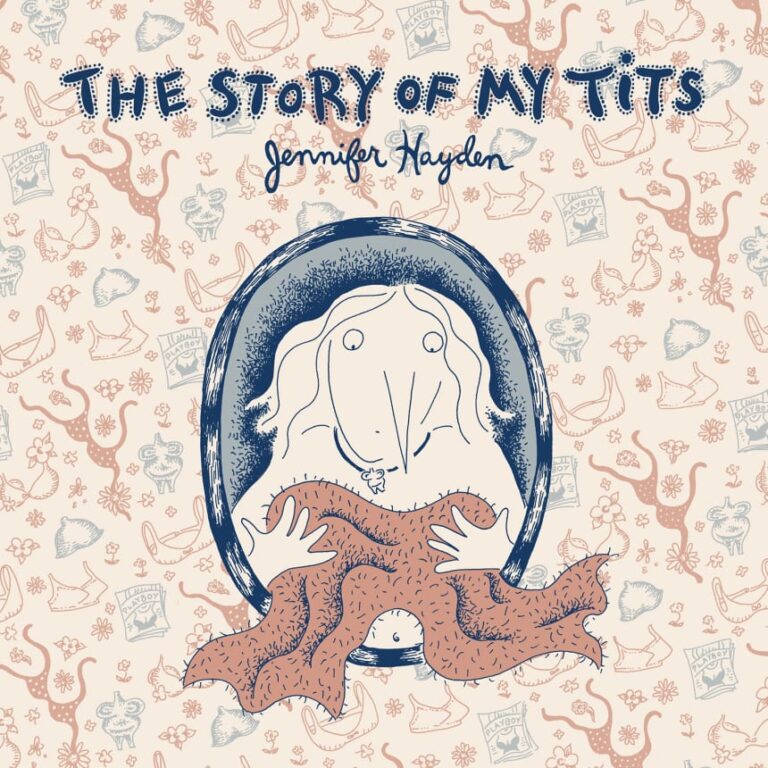