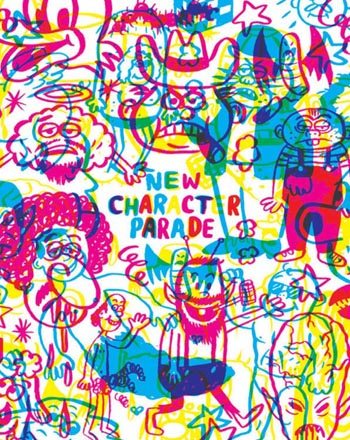 In the mid-1970s, DC debuted a series called 1st Issue Special, each installment of which promised the introduction of a shining new star in that company's firmament, any one of which might (they hoped) prove bright enough to spark interest in his own ongoing title. The premiere featured the adventures of Atlas, a kind of New God-manqué, and only the first of Jack Kirby's creations to adorn the line-up. Most memorably, number 6 presented The Dingbats of Danger Street, a goofily hip youth team who dig on hot dogs and the Stones, dad. The try-out book must have been a perfect venue for the prodigious and not always coherent creativity of the King, who for his past several years spent in the DC stable had been dashing off and discarding one new concept after another—his gonzo brainchildren could have filled hundreds of pages of a Kirby-only 1st Issue series.

In the absence of such a magazine, though, perhaps we can marvel at how nearly Johnny Ryan has been filling that King-sized hole in comics culture with the strips collected in his New Character Parade. Forget for a moment such Ryan-created luminaries as Gargu, the world's sickest dolly, or Pigasus, the winged swine, and consider instead some Kirby one-offs. Captain Pypar from Kamandi, the talking British bulldog in full military dress, or the Fourth World's superhero version of Don Rickles—what are these but Johnny Ryan riffs avant la lettre? How many degrees of fucked-upped-ness truly separate the Dingbats of Danger Street from Johnny's Fat Chicks of the Mind?

Of course, Ryan's brand of snot-nosed acting-out could also have made hay of other 1st Issue features like Codename: Assassin, Lady Cop, and The Green Team (Boy Millionaires). Indeed, such trashy comics concepts have already fallen victim to the cartoonist's spray-gun satire in The Comic Book Holocaust, the first of his themed sketchbook collections (New Character Parade is his third, following The Klassic Komix Klub, which uses the literary canon as a springboard for making hilarious poop jokes). But discerning a connection between Ryan's work and stupid garbage is almost too easy—his relentless attraction to kitsch and excreta as ideal subjects creates a kind of smokescreen of doyyyy that makes it difficult to recognize his remarkable, King-like creativity. Better, I think, to consider Ryan alongside a synthesizer of trash culture like Kirby, than to see him only as someone with his hands playing in the dungheap—because let me tell you, he's making something out of that shit.

As Jeet Heer has remarked, “There was hardly any significant development in 20th century history that didn't somehow get refracted through Kirby's whacko sensibility”—no doubt a similar case could be made for Johnny Ryan. Where Kirby's imagination, though, is the meeting place of the nightly news and the pulp paperback, where the youth culture and the civil rights movement and the space race merge with overblown myth and alien invasion, Ryan's more properly belongs to the quarter comic-book bin, the flea-market VHS vendor, the shitty hair-metal record, the syndicated rerun, the internet troll. Like Kirby's, Ryan's mind acts as some kind of collision chamber for all the cultural junk of his era, but this is a place where Toulouse-Lautrec and celebrity gossip rags co-exist happily, where the recession hits even Shitsack Billionaires, and where 9/11 is just another gag on The Jeffersons. Ryan's funnybook universe is a treasure house (or landfill) of pop rubbish that has mutated and spawned and is looking to star in its own sitcom. Consider New Character Parade, then, a series of pilot episodes: the 120 single-page try-outs collected herein showcase Ryan at his most cancerously productive, each new idea bursting out of the cartoonist's mind like so many tumors from his characters' tits. 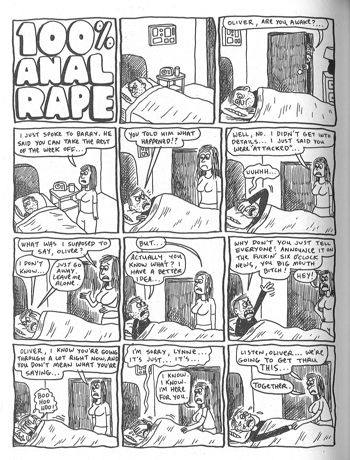 In his brief intro, Ryan says that he is “just fuckin' around” here—and it shows. These strips feel illegitimate, tossed-off in the best kind of way—the paper is shit, the dialogue scratched out and crammed inside overstuffed word balloons, the thin lines scrawled with great urgency and no second thoughts. So much low-rent, madcap, just-getting-it-down-on-paper can't help but result in a bracing directness, an unfiltered id-dump. Even the covers of the collection testify to the veritable vomiting forth of creativity inside: a dog's breakfast of figures splatters the page, each character indistinguishable from the next, delineated in crude but appealing fashion, and haphazardly overprinted in gaudy CMY colors. Squint and you can make out some of the cartoonist's more recognizable visual trademarks: sproingy boobs, google eyes, swastikas, drizzling fluids. Ryan has also become adept at limning long and wand-like wieners, but these he keeps for the interior pages, where the images he creates are often so singularly, unpredictably stupid that they sear themselves into the imagination indelibly. Behold Fuckball, a wet and farting lump of cocks, clits, tits, and assholes! Witness the puking eye sockets of Wart Disney, or the three kings molesting the Christ Queef! Throughout there are these kinds of individual panels, worthy of being turned into iron-on patches for the jean jackets of high school stoners, or at the very least becoming internet memes.

But what distinguishes Ryan's comics, here, is not his go-for-broke offensiveness, or his eminently quotable one-liners (“Don't fuck with dirtbike America, faggit!”). Rather, it's his willingness to play this sort of outrageousness against yawning cliché banality—Rasputin on a dirt bike peeling out next to a child home sick in bed. The book's most outstanding example of this patented Ryan incongruity is a page entitled “100% Anal Rape”, the concept for which is so overwhelmingly obvious that Ryan sees no need to even cartoon it—the entire story just consists of a woman trying to comfort her understandably despondent husband (“We're going to get thru this... together”). Though it does so more subtly than others, this strip follows Ryan's usual winning formula: simply put, the cartoonist straight-up refuses to orchestrate a joke. Instead of adhering to the typical comedy routine's strict cause and effect of set-up and punchline, Ryan prefers to just agglomerate a bunch of mundane crap, piling on detail and incident until the whole monstrosity collapses under its own weight. Strips will often start with characters voicing their boredom, walking down the street, or sitting on the couch, and after twelve panels conclude with orgasm, murder, bullshit sentiment, and—profanity of profanities—advertisements. 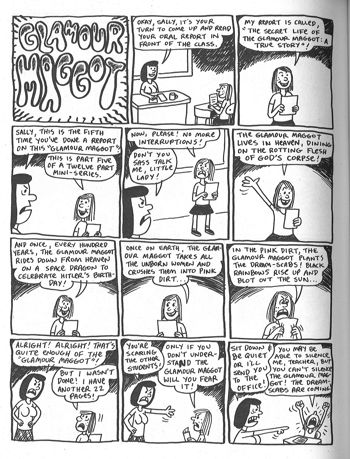 Tracing this kind of one-upsmanship in New Character Parade—in which a story can begin with Harry Connick, Jr. crooning a ballad, and end with a corpse-rape tableau—ought also to help illuminate the apocalyptic strain that has long been present in Ryan's scorched-earth approach to humor, and which has been rearing its head far more frequently of late. Following the artist's comedic premises to their logical conclusions often leads inevitably to cataclysm and death: the last few issues of his Angry Youth Comix saw long-suffering sidekick Sinus O'Gynus dying in a cunt-fume explosion and getting sent to hell, while world's greatest comedian Boobs Pooter oversees the murder of everyone on Earth, then sells the decimated planet for use as a galactic cumrag.

In this light it should come as no surprise to encounter a strip in New Character Parade like “Glamour Maggot,” which depicts a schoolgirl delivering a report on the titular entity. He “lives in Heaven, dining on the rotting flesh of God's corpse,” she tells us, before concluding, “In the pink dirt, the Glamour Maggot plants the dream-scabs! Black rainbows rise up and blot out the sun....” This is the same overheated, visionary rhetoric spouted by the doomsayer on the street corner, or by St. John himself—in the mouth of bright-eyed Sally, of course, it's a fucking gas. Still, “Glamour Maggot” and its demonic kin, a number of other ritual-murder-happy strips sequenced toward the end of this volume, seem to act as harbingers for the kind of “new trend” in Ryan's cartooning we have recently been witnessing.

His manga-format action serial, Prison Pit, and his VICE magazine shorts—gags and left-field horror-humor, widely circulated online—see the gross-out cartoonist turning his attention to portraying either blunt physicality, or consciousness colonized by eldritch forces. These comics are still mindless, then, sure. But where Ryan's exercises in dumbness once resulted in shock that simply tilted over into guffaws, by the end of New Character Parade—when a crystal helmet vouchsafes its wearer bloody visions of “beautiful lies,” or when dead children's taffy transforms into demon dick—those same shocks turn more often into jaw-dropping, outright awe. At last, then, it can truly be said: anymore, this guy is making awesome comics. 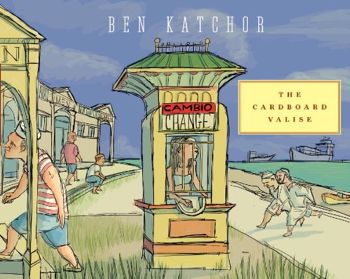 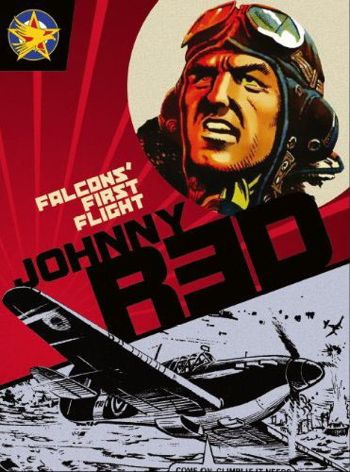