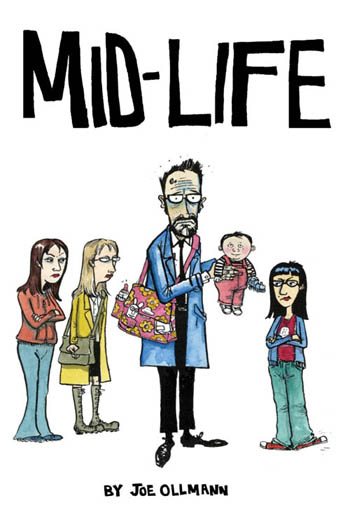 For those of us who got fed up a long time ago with misanthropic, self-pitying comics about unappreciated cartoonists, the first few pages of Joe Ollmann’s Mid-Life don’t seem promising. Here’s liver-spotted, pot-bellied, deeply scowling John Olsen—Ollmann’s “semi-fictitious” surrogate and protagonist, a just-turned-40 magazine art director with a much younger second wife and an infant son, as well as two grown daughters from his disastrous first (and teenaged) marriage—whining to the reader in a running narrative as he grudgingly cleans out the cat box, steps on a loaded diaper, then a baby toy, then flees to his studio, where, poor bastard, he discovers dust, “actual dust,” on his drawing board, a ruled-out but empty-paneled sheet of Strathmore taped there like a stinging rebuke. How, he wonders, did his “hipster life get so very boring and domestic?”

Barely half-way through chapter one I was already thinking, Oh no, please, not again. Not another one of those. And, in fact, no, not: because quickly, very, Mid-Life turns into a deftly structured novel full of shrewd characterizations, nuanced scenes and memorably quirky bits of business, everything as harrowing as it is compassionate and very funny—a genuine accomplishment. (Although Olsen shares an almost identical vita and biography with Ollmann, or vice versa, personally I couldn’t care less which episodes and events “actually happened” and which have been invented for the book. It’s none of my business. And besides, I’m reminded of an old-school magazine editor I once worked for named Everett Meyers who insisted that if a memoir has dialog in it, it’s fiction and ought to be read as such. What matters is the story between the covers, does it work, and by any standard, this does.)

While trying to settle down the baby one evening, Olsen plays a new DVD of children’s songs about monkeys and marshmallows performed by a curly-haired thirty-something singer-songwriter named Sherri Smalls. He’s replaying it for the third time when his 19-year-old daughter drops by the apartment for a visit and a meal and teasingly accuses him of having the hots for a children’s performer. Instantly, irritably he denies it. Naturally, pathetically it’s the truth. The man is smitten.

From that point on, chapters alternate between Olsen’s domestic and professional life in Canada (marriage and job are both on the rocks) and Sherri Smalls’ emerging show business life in New York City, sequences written and blocked with the confidence and verisimilitude (if not the creamy photo-realism) of Leonard Starr’s classic newspaper strip On Stage. Once a waif-like street singer who wrote and recorded music for grown-ups during the early 1990’s, she is currently being courted by a children’s cable network to star in a Saturday morning TV show. Although seven years younger than John Olsen, Sherry Smalls is experiencing an early-onset mid-life crisis of her own. Is she really and truly a children’s performer; is that the best she can do? Is she a sell-out, as a former lover and band mate (now a monkey-suited dancer in her stage show) keeps calling her? Maybe, yeah. But it would be nice to have some money for a change, a nice place to live, a healthier diet than “chips and a beer glass full of wine,” possibly even some romance.

When Olsen flies into New York for a couple of days to supervise a photo shoot, yes, of course he contacts Sherri under the creepy ruse of interviewing her for his magazine; and sure, absolutely, we’ve all seen this sort of middle-age-crazy-white-guy behavior before in half a million novels and movies, but, trust me, what transpires once the two of them hook up for drinks is not only unexpected but inspired. And painful. And hilarious.

What’s particularly impressive and rewarding throughout is how Joe Ollmann insists upon taking his time telling his story (action, reaction; action, pause, reaction; action, reaction, pause, further pause, action, and so on). A scene takes as long as it takes, but not one beat longer. Employing a strict-9-panel grid (violated just once and to devastating effect with a near-full-page portrait of schlubby, flabby John Olsen in his underpants), the book’s twenty-five episodes are paced out to permit characters both major and minor to emerge and develop as distinct, messy, knowable personalities. Even familiar “types” (a coked-up rock musician, an office nerd, a corporate sharpie) confound presumptions. Ollmann’s unlovely drawing is angular, brushy and in-your-face, evincing a boatload of influences (Art Brut and Max Beckmann, Peter Bagge, Jeffrey Brown, Ben Katchor and even, maybe, Ted McKeever) but never seeming borrowed or amalgamated. In the past, Ollmann’s characters could look infinitesimally or, sometimes, drastically different from panel to panel; not here. Here, Ollmann has made a huge leap forward as a stylist and as a storyteller. Mid-Life is a major and wonderful piece of work and attention ought now to be paid. 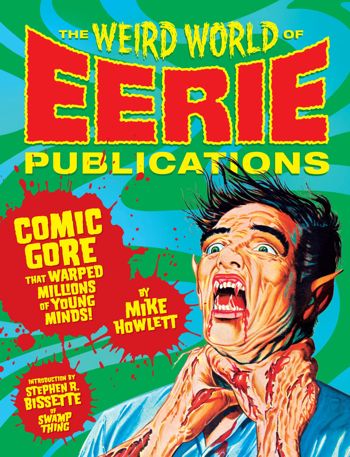 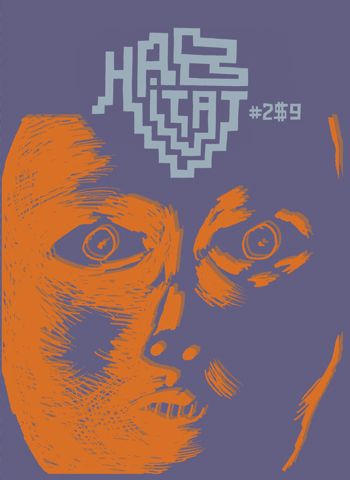