In another example of how far I can stray from the presumed topic, this time we start out with Pedro, the mailburro at Boys’ Life magazine back in the 1950s. And from there, we wander off into the surrounding landscape to a fare-thee-well, meeting Reamer Keller, Lowell Hess, Dik Browne and Tom Eaton on the way.

Strolling leisurely through an antique mall one day last fall, I came upon a stack of Boys’ Life magazines. On top of the stack was the one with the cover that’s posted nearby. “Pedro,” I thought, murmuring the name of the magazine’s unofficial mascot, a donkey. Millions of other male Americans as well as I would recognize Pedro immediately. Officially, he was the “mailburro” of Boys’ Life, which was officially the magazine of the Boy Scouts, hence the vast circle of acquaintanceship with Pedro. 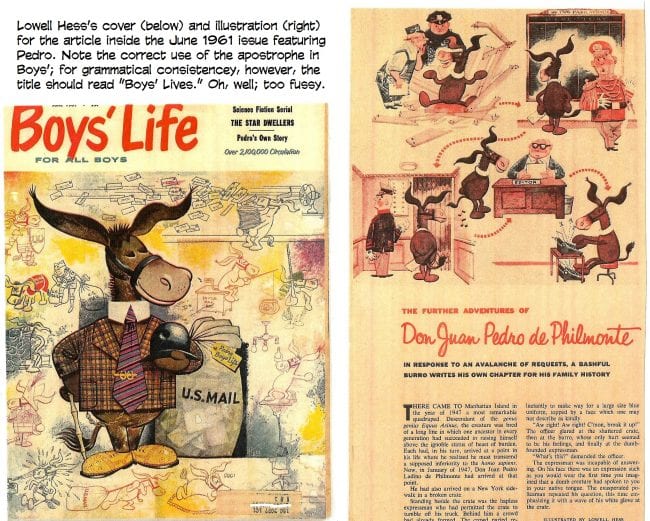 Ostensibly, Pedro delivered the mail to the magazine’s staff and responded to letters-to-the-editor.

Inside the Pedro-covered issue of the magazine (dated June 1961) was a full-bore article about Pedro. It was, alas, not an actual history of the hayburner’s association with the magazine. It was, rather, a tale that relates the fictional 1947 arrival of the descendant of the genus genius Equus Asinus, one Don Juan Pedro Ladino de Philmonte, at the offices of Boys’ Life in New York, where, after alarming various members of the magazine’s staff by speaking—and sometimes reading—he took the position of mailburro, sorting incoming mail and then delivering it to the magazine’s minions on the 17th floor of 2 Park Avenue.

At first, Pedro offered to sing for the editor, observing that “where I come from, discerning people refer to others of my species as ‘mountain canaries.’” But the editor escaped this dubious privilege by saying, simply, “Don’t.” In sorting the mail, Pedro discovered that many of the youthful letter-writers asked questions that no one on the magazine’s staff was equipped to answer. But Pedro, as it happened, was fully equipped with a vast store of knowledge on a wide array of esoteric as well as mundane topics. So he pulled up a chair in front of a typewriter and began typing (with his hoofed “feet”) answers to all those questions.

“The fabulous flopears drew unfailingly from his incredible fountain of knowledge. It was not long before the entire operation of the magazine hinged upon the incomparable Don Juan Pedro Ladino de Philmonte.” At the end of the article, the office receptionist notes: “The foregoing report was typed by Pedro himself”—thereby accounting for the article’s flattering treatment of its subject.

We should have known. It was all a happy fabrication (the salutary version of “lie”). What was true, however, was that Pedro everafter adorned the magazine’s letters-to-the-editor column. The column was introduced by a paragraph or two relating the “fleabait’s” latest adventures, always signed with his “mark”—UU (a horseshoe imprint)—and during my time as a Boy Scout reader, the column was adorned with a small comical drawing of Pedro by freelance cartoonist Reamer Keller. More of him in a trice.

The cover art that had attracted my attention was by Lowell Hess, a popular humorous illustrator of the 1950s, who, as we’ve seen, also decorated the article within. (And if you follow the arrows embedded in the art, you’ll be following in Pedro’s footsteps as the enters the premises and, finally, gets a job there.) After magazines began folding in the late 1950s, Hess found work at Graphics3 Inc. as creative director, for 26 years, designing and illustrating pop-up greeting cards for which he won many awards. He died in 2014 at the age of 93.

Hess did other Boys’ Life covers from time to time, including the two at your eye’s elbow—one about Pecos Bill, the legendary cowpoke of the Southwest; the other, a glimpse of staff shenanigans in the editorial offices of Boys’ Life. 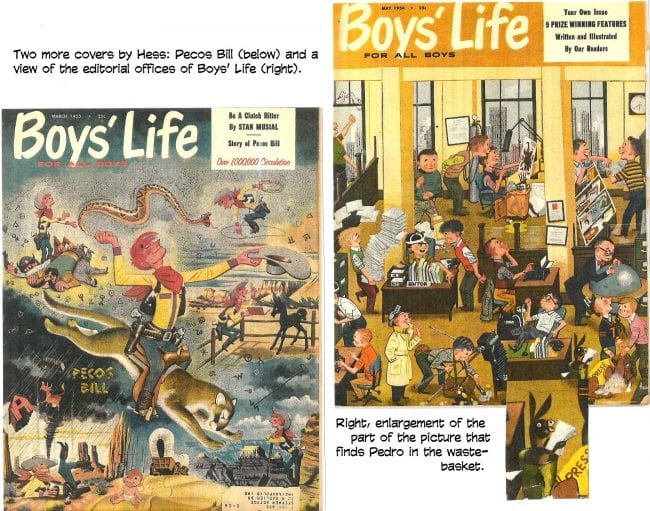 It was reported in a blurb about the staff portrait cover that when Pedro saw Hess’s picture of the staff at “work,” he snorted: “Hah—a perfect portrayal. The staff of this magazine in action looks just like a bunch of crazy, mixed up kids. F’instance, just look at —”“F’instance,” snapped the editor, “—just look at Pedro.” And he pointed to a tiny portrait at the lower right corner of Hess’s picture. Pedro sneered. “Why, I’m not even in the—.” Looking where the editor pointed, the hayburner balked and delivered himself of a half-strangled gulp. “That Hess guy is blind,” he observed, noticing that Hess had drawn him in a waste basket.

“Well, anyway—practically nobody will notice me. I hope.”

But I’ve now destroyed that hope, frail though it was to begin with. Inside the March 1955 Pecos Bill-covered issue was a two-page comic strip about the famed cowboy, drawn by Dik Browne, who was then also producing a regular full-page comics feature, The Tracy Twins, in the magazine. It was Browne’s skill in drawing kids and family members that attracted the attention of Beetle Bailey’s Mort Walker and, simultaneously, of Sylvan Byck, the comics editor at King Features, both of whom were looking for someone to draw a new strip about Beetle Bailey’s sister’s family. Both Walker and Byck, unbeknownst to each other, had decided Browne would be perfect for the assignment.

Browne was working, then, at Johnstone and Cushing, an advertising agency well-known for doing advertising with comics. With a bullpen full of cartoonists, horsing around was part of daily routines. And when Byck phoned Browne and asked him if he would be interested in doing a nationally syndicated comic strip, Browne thought a fellow staff member (namely, Stan Drake) was playing a practical joke on him; so he hung up the phone.

Later, learning that Drake was innocent—and that no one else in the shop was guilty—Browne called Byck back and arranged a meeting. Hi and Lois debuted soon thereafter, on October 18, 1954. But Browne kept doing The Tracy Twins until about the time he launched a strip solely his own, Hagar the Horrible, February 4, 1973.

Other cartoonists did covers for Boys’ Life. Nearby, for example, is one by Ed Nofziger, who specialized in drawing comical talking animals in magazine cartoons. Before we leave Boys’ Life as a breeding ground for cartoonists, let’s return to Reamer Keller, who drew Pedro for the magazine’s letters column well into the 1960s. 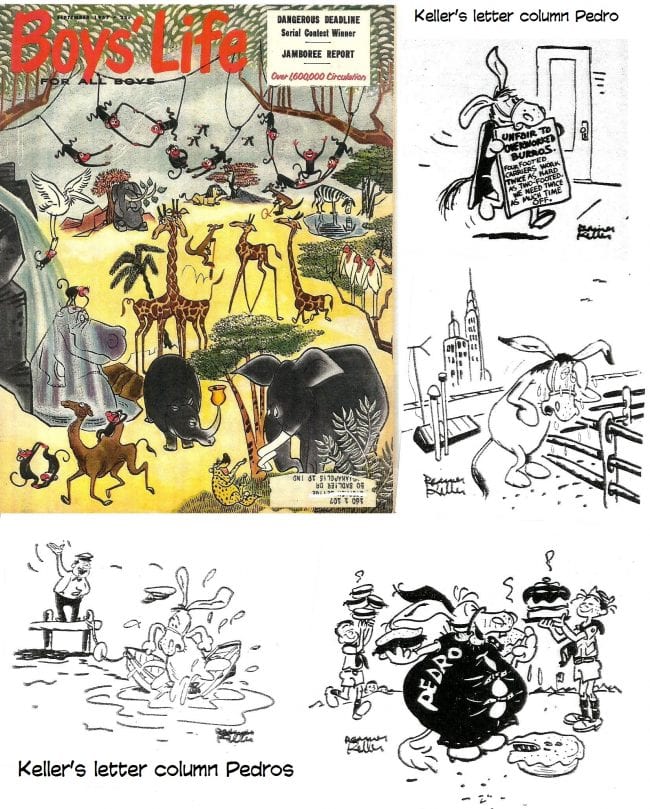 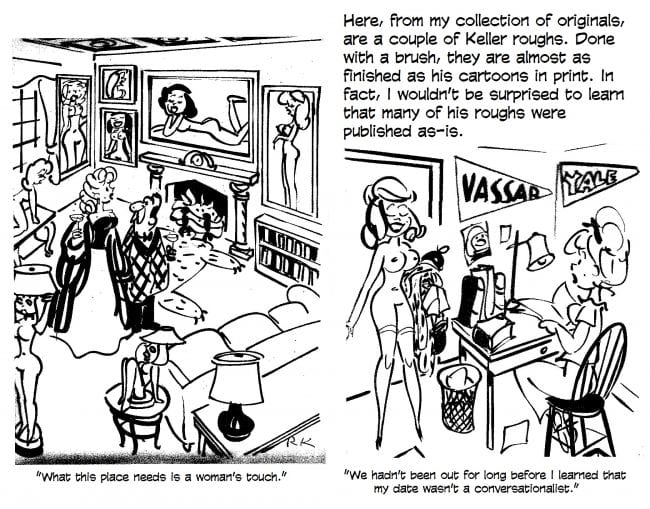 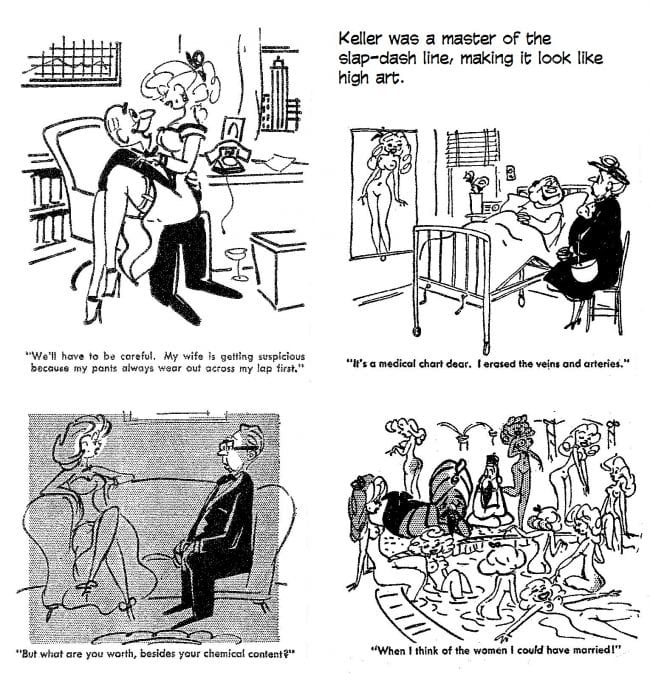 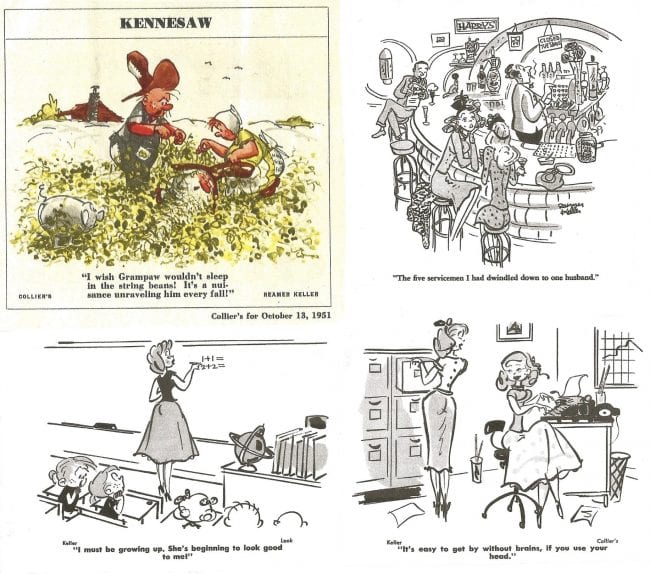 Keller was one of the most prolific magazine cartoonists during the heyday of magazine cartooning: starting in the 1930s, his cartoons appeared for 30-40 years in virtually every magazine being published. According to St. Wikipedia, he drew cartoons two days a week and for the next three, made the rounds of magazine offices to sell them. He was “so prolific he often drew 50 cartoons a week and routinely published a thousand cartoons annually for decades.” His style was loose, almost slapdash, which undoubtedly helped boost his output.

In the early 1950s, he produced a regular panel cartoon for Collier’s about an eponymous  hillbilly named Kennesaw. It was syndicated as a comic strip December 7, 1953 - January 28, 1956. Ten years later, he did a syndicated panel cartoon, Medicare, about doctors and nurses, January 3, 1966 until some time in 1976. He died in 1994 at the age of 89. Only two collections of Keller’s work are, to the best of my knowledge, available: Why the Long Puss (1956) and The Mating Manual (1957). I’ve dipped into the former for some of the samples posted near here—and into a couple of Best Cartoons of the Year anthologies, edited by Lawrence Larriar.

Finally, one last squib about Pedro: “The Wacky Adventures of Pedro,” a comic bookish feature in the comics section of Boys’ Life these days, has been written and drawn by the late  Tom Eaton since the early 1980s. Before that, Eaton served a stint at Hallmark then as art editor at Scholastic Books.

Quoted by Chris Tucker at scoutingmagazine.com, Joe Connolly, art director of Boys’ Life at the time and an army buddy of Eaton’s, said Eaton drew other Boys’ Life comics—Dink and Duff and Webelos Woody—before taking over Pedro. His picturing of Pedro is, as you can see from the fragment here, much more tightly rendered than Keller’s. 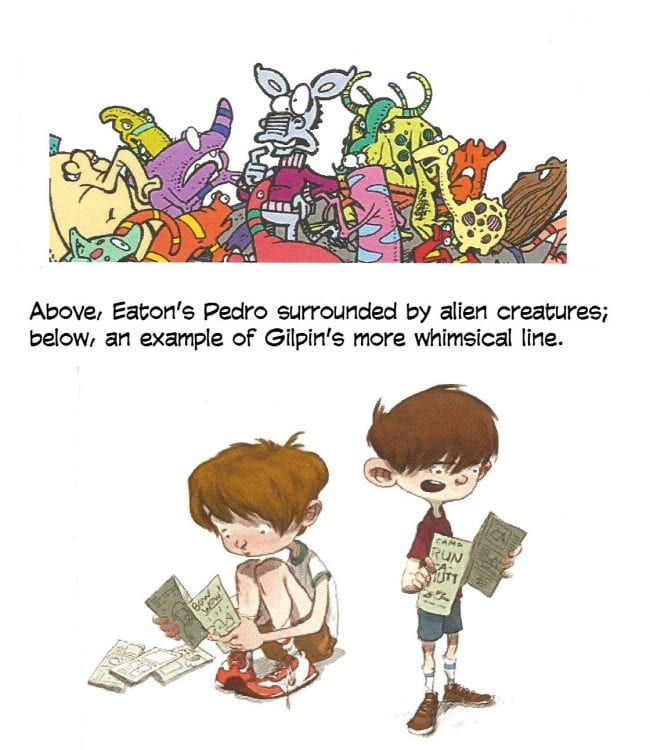 Eaton took particular pains with the language in the feature, often resorting to alliteration and elaborate word play—referring to Pedro as “queasy quadruped,” “four-legged phenom,” and  “alfalfa aficionado,” and also conjuring up such musical interludes of “luminous lingo” as “entrpreneurial edible innovation.”

At 75, Eaton retired at the end of 2015, leaving Pedro to Kansas children’s book illustrator Stephen Gilpin, whose work, coupled to Eaton’s in the previous visual aid, is done with a finer more whimsical line. There. See how much an obsessive cartoon lore-ist can wring out of a cover picture of a jackass? 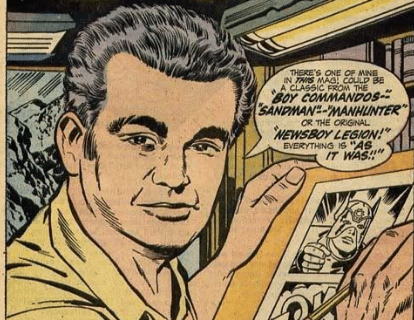