Last Thursday, Paul Krassner’s friends were informed that he had entered hospice. As I grow older and encounter friends entering hospice as a regular occurrence, I’ve noticed no one seems to survive a week after entering this final stage of care. So, it wasn’t a surprise when a follow-up message indicated, three days later, that Sunday, Paul had died. I knew Paul as a friend, for which I’m deeply thankful. In a creative sense, I consider him a father figure. So, I’m grieving today. I learned from Paul in the undefinable ways you learn from elders.

Politically, Paul was fearless. He used satire to sanitize bullshit and cruelty. His creation, The Realist, was a political magazine that began in 1958. It was full of dark, liberating, and intelligent jokes. It was born out of the offices of Mad magazine, where Paul was an early, contributing writer. You can read every issue of The Realist here: http://www.ep.tc/realist. This archive exists because he welcomed the notion that every issue be available on the Internet, for free.

The Realist caught the attention of John Lennon, Terry Southern and Lenny Bruce, among many others. (The FBI read the magazine as well. They considered it a dangerous publication, which is funny because it is a humor magazine.) A lot of people who created the mentally liberated world we enjoy got their first clue about what that world might look like through the pages of The Realist.

Lennon, Southern, and Bruce were avid readers of The Realist, and it’s nice to consider these icons of music, writing, and comedy were simultaneously influenced by Paul’s good vision, free thought, and wonderful, candid humor. Hunter S. Thompson enjoyed a hit off of the role model pipe, too. Thompson referred to the “Krassner Style” in numerous correspondences while he was developing the art of Gonzo journalism. Other writers who shared camaraderie with Paul included Kurt Vonnegut, Joseph Heller, Norman Mailer and George Carlin. The first collection of Robert Crumb’s work, Head Comix, had a long introduction by Paul. He connected people. I began my graphic biography series, John Wilcock: New York Years, Book One, on which I collaborate with Scott Marshall, when Paul introduced me to Wilcock. 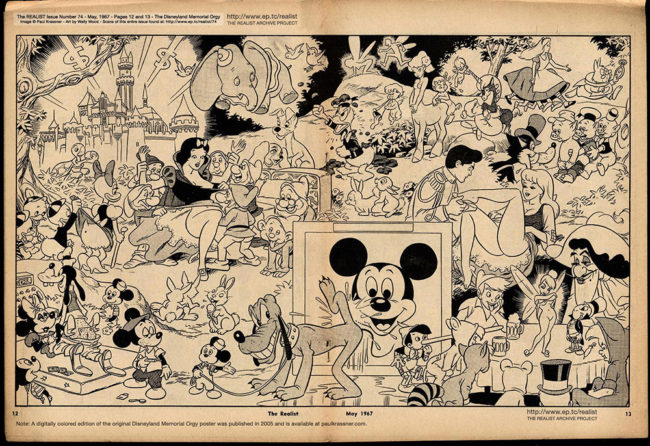 I consider this the best page in comics not just because of the content, but because of the risk-taking. Just CONSIDER the chance of your future livelihood if you had published that page in 1967. Paul had to gamble that Disney would not sue (he had guessed that suing would bring more attention to the work, which would embarrass the family-focused empire). He also had to find a printer willing to publish the issue. (Numerous printers refused to print future issues as a result.) Artistically, he collaborated with Wallace Wood so that it didn’t just look like a loosely drawn parody, but photo-perfect in the Disney style. It might be Wood’s greatest work. The gamble paid off. Disney avoided any litigation, and a publisher was found. But Paul could very easily have lost his media postage agreement with USPS; he could have been bankrupted by Disney in one Dwarf’s sneeze; he could have burned all possible connections with any printer for future issues. WHY DO IT? Maybe the lesson from Paul is that he didn’t care. He just loved the idea and wanted it to see the light of day.

Paul worked with cartoonists to see so many hilarious pages like this produced. His collaboration with the artist Richard Guindon is unsurpassed and deserves its own article. With Guindon, he created the four-page work “Rosemerica’s Baby." 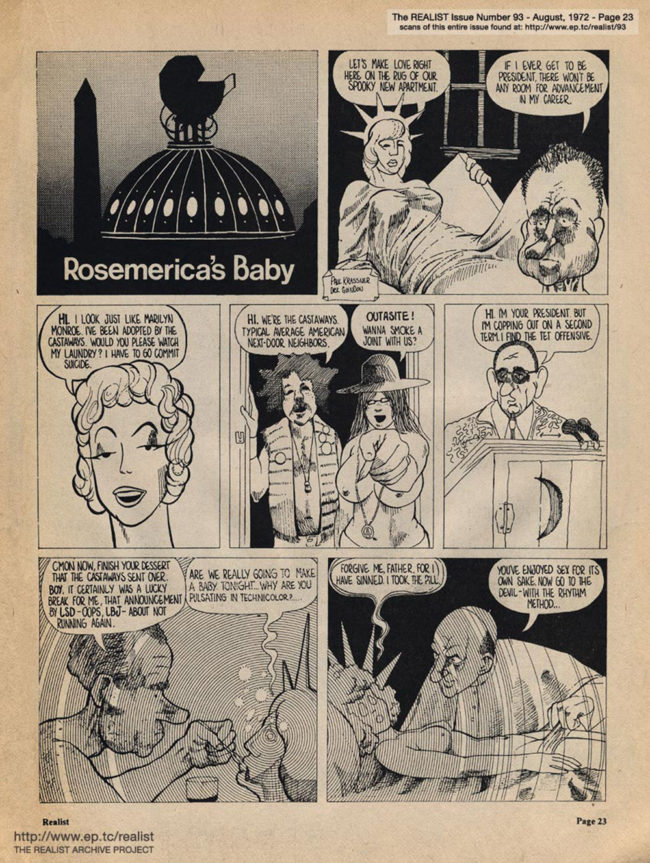 It’s easy to compare it to Krassner’s piece with Wallace Wood; the centerfold is even more frightening. 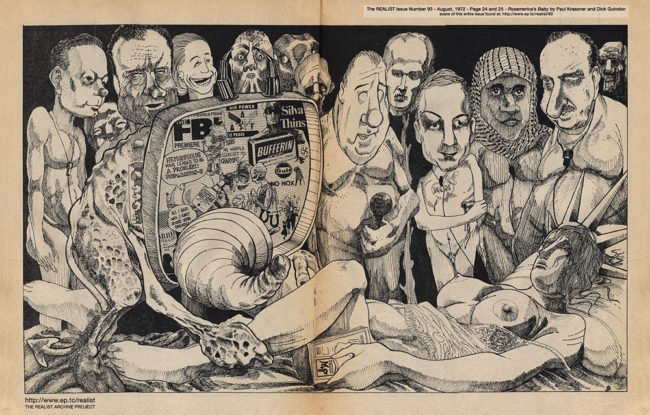 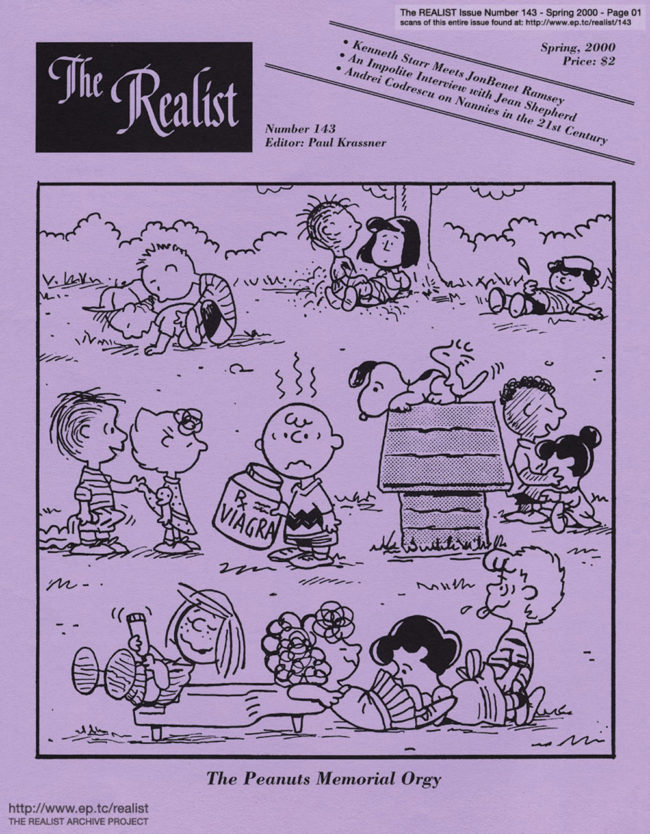 The last issue of The Realist showed a Norman Rockwell painting of two fathers smoking opium in front of their children, who are playing chess. How Paul got a dead Rockwell to paint that thing is still a mystery. The jokes were that good and funny.

Paul offered a haven free from censorship to many of the best cartoonists in New York. Mort Gerberg and Ed Fisher often found a home for their sharpest gags in The Realist. Paul rarely had to pay much for them, since the canard was that they’d bring all their comics to the New Yorker, and then take their best work, which was rejected, to Paul’s office down the road. As a result, daring, funny pieces like Mort Gerberg’s “Junkie Battalion” and its great, heroin-inspired Vietnam jokes survive. Ed Fisher had so many hilarious, unbought ideas, Krassner just gave him an open slot in many issues, simply dubbed Ed Fisher’s Page.

It’s unlikely The Realist could survive the present era of internet sensitivity regarding word choice, group-think mobs, and polarizing left and right political views. Paul was a clear political progressive but found opposing viewpoints exciting. I learned to identify, personally, as a Free Thinker from Paul. I prefer to define myself that way more than to align with any single group. I learned so much from Paul. And have so much more to learn from his work. Fantagraphics put out a collection of the best comics from The Realist in 2016, appropriately titled The Realist Cartoons, and they’re about to publish a collection of Paul’s best writing, Zapped by the God of Absurdity. I’m so happy for both of these books appearing at the end of his time here. Paul lived an amazing life, and the benefit of great art is it never leaves us. Thanks for making so many permanent contributions to the world, Paul. 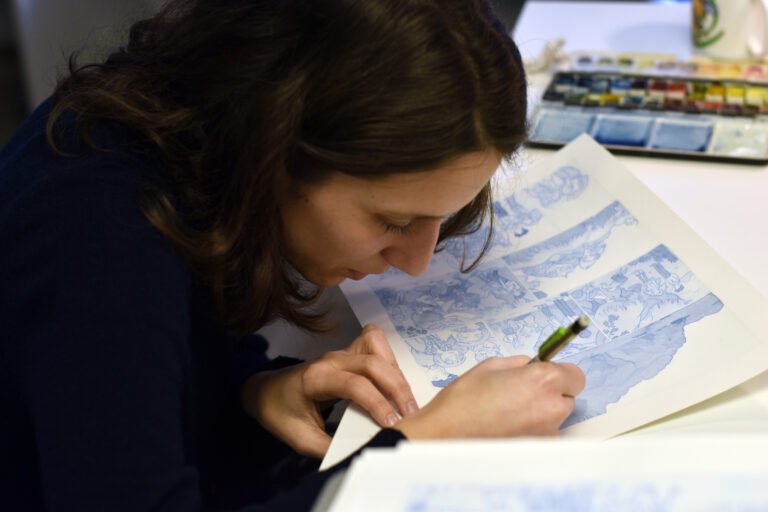 “I’m Crazy. This Is Why It’s Really Hard To Find A Publisher”: Sloane Leong Talks To Giorgia Casetti 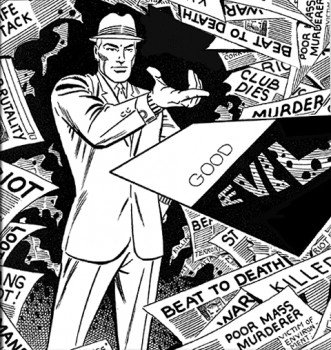