Today on the site, Alex Dueben returns with an interview with the New Yorker and CBS News cartoonist Liza Donnelly, who curated a current exhibit at the Society of Illustrators.

You did a panel a few weeks ago at the Society of Illustrators and it was you and Roz Chast and Emma Allen and Liana Finck and Carolita Johnson, and you have different styles and approaches, but you’re also from different generations. What was that conversation like?

The other thing about the exhibit that speaks to that a little bit was that when I wrote the book it was received well and it’s still in print, but I didn’t get any real attention. That’s fine, it happens. When I started putting out a call for cartoons from new cartoonists, I half expected a blasé response and some people not wanting to be in the show because it was feminism and maybe a tired subject or they didn’t want to be only with other women. But I got a very positive enthusiastic responses from pretty much everybody. That was great. I felt that there was a new sense with this younger generation that yes we want to talk about it, yes we want to write about it, yes we want to draw about it. It’s important to us and it’s something we want to do. That was great.

For the panel I chose people who had some experience at the magazine so I didn’t bring in any of the brand new people. Although we’re going to do another panel October 11th, and I might select some newer voices. I like to pick people that I know, that I’ve done panels with before, because I know how they operate and it’s more comfortable. Roz and I have known each other since the late seventies. Carolita I’ve known a long time too and she’s sort of a middle generation cartoonist. She started in 2003 or so. Liana is new, but not that new. I know Liana very well. We’ve become friends and I interviewed her when her book came out at a book event. They all had great stories and are good at telling stories. Liana is very funny but she can get deep quickly. Carolita I know can be an angry and vocal feminist so I thought she could bring a great perspective. Emma was great. The whole thing is on Facebook Live. It went really well. The cartoons I selected for the exhibit were a nice representation of the cartoonists and I actually asked the cartoonists what they would like to be in the show. There were some feminist cartoons in the show but not even close to all of them. But for the panel I thought I would pick cartoons about women’s rights or the woman’s perspective on a relationship or equal rights or work quality. That made for a very funny and interesting panel.

We also have day two of the Cartoonist's Diary of Vassilis Gogtzilas.

This is Mattotti and Kramsky’s second collaboration, and it’s worth noting that Mattotti, the illustrator, gets top billing. That says a lot about what you need to know about the book from the get-go: it’s going to be illustration-driven, not text-driven. The textual plot is entirely coincidence-driven and there is no doubt that it’s because the text is simply a backdrop for the illustrations in this book. In fact, without Kramsky’s words the story would probably convey much of the same thing: text only appears when a character is speaking aloud and there are very few onomatopoeic sound noises. Rather, the purpose of the book is to provide Mattotti with a platform to build and subsequently explore an intricate, curious world full of imaginative creatures with exaggerated sexual organs and nonsensical actions. The presence of the text, therefore, merely provides readers with opportunities to connect to the characters and their experiences. The fact that Hippolytes is a parent trying to do the right thing for his child, or Zachariah’s concerns that he is letting down his family give readers touchpoints to relate to and reasons to invest in Mattotti and Kramsy’s journey. After all, it’s hard to invest time in a 400-page book if you can’t connect to a single experience in it.

—Kate Beaton, who recently announced she has decided to retire her incredibly popular Hark! A Vagrant site and turn it into an archival resource, shared a long thread of advice for cartoonists on Twitter.

—Paul Karasik posted a picture on Facebook of the successful relocation of the Charles Addams mural he wrote about for The New Yorker last summer.

—Abhay Khosla compares a 2009 Marvel page with the 1968 Jim Steranko page it attempts to homage.

There’s no shame to getting smoked by Steranko. But it’s just neat seeing all the different ways he’s smoking somebody, though.

—Diana Swain at the CBC interviews Bruce MacKinnon about the controversial political cartoon he recently drew about the Brett Kavanaugh confirmation. (It's short, and they don't get into detail about the criticisms of the cartoon, either the partisan ones or those from some feminist critics.) 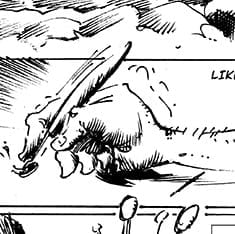 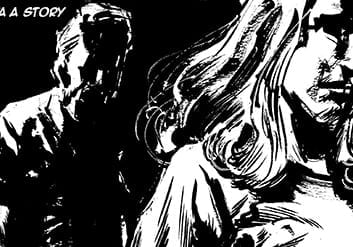