Joe McCulloch is here with his usual Tuesday-morning guide to the week in interesting-sounding new comics. He also expounds at length about one my own favorite manga titles: Kōji Aihara & Kentarō Takekuma's Even a Monkey Can Draw Manga. An excerpt from the middle:

In this way, Monkey lacks the call to arms or the righteous sarcasm you might expect from an American satire; instead, its characters accept the terrain as given, and move to analyze it, without any gesture toward affecting change. It is, nonetheless, not a kindly study: the core joke of Monkey is that manga, as a commercial art, can be understood fully -- indeed, mastered -- through the adept clicking together of pre-made commercial parts; there is no shame in swiping poses or ideas from other artists, as comics is fundamentally a language of shared symbols, which can only realize meaning through simple variations on repetitious usage. This is illustrated most vividly through likening the desirous components of "ladies' comics" (from which josei would later distinguish itself as a less porny manifestation) to falling Tetris blocks, but the machinations of shōjo romance are likewise compared to the rigid formalities of sumo wrestling, while the sexual conquests of a seinen erotic comedy hero are presented as conveyer belt sushi - very mechanical! With the wave of a finger, Takekuma observes that no other type of young men's manga is relevant: everything boils down to the immediate gratification of desire by the most streamlined means.

Duncan Mitchel writes about the exploration of stereotypes in Alison Bechdel's Fun Home.

—Misc. There's a new issue of the UK-based comics magazine Off Life available, in both print and digital form.

Joost Swarte did the cover for the latest New Yorker. He is also apparently launching a new magazine of his own. 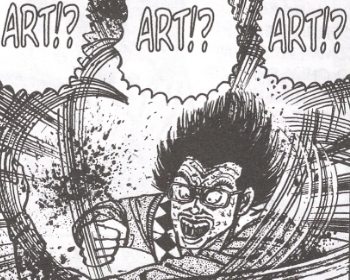 THIS WEEK IN COMICS! (8/5/15 – A Body Developed for Fucking Millionaires)

Sammy Harkham on Murder by High Tide by Maurice Tillieux