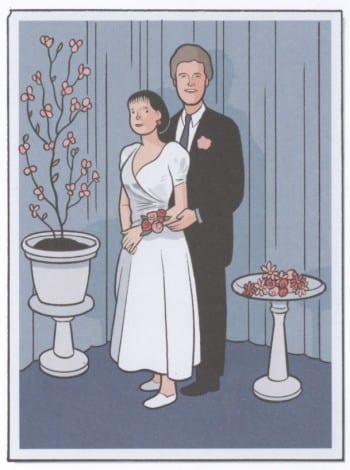 Building Stories? Take your time, and read it carefully.

I had the pleasure of interviewing Chris Ware on stage as part of the first annual MIX Conference at the Columbus College of Art and Design, which took place on Friday, October 5th and Saturday the 6th. It was a lovely event; I was thrilled to meet Ware, and it was a blast to co-present a paper, with Charles Hatfield, about Eddie Campbell’s Bacchus. The presentations at MIX were top-notch, and much of the credit goes to MIX organizer and CCAD faculty member Robert Loss, who worked tirelessly at fundraising, scheduling, and the care and pampering of the presenters and guests. Thanks to Robert and everyone else at CCAD for their hospitality.

While preparing for my interview, I read Building Stories and began to formulate questions. An obvious quality of the book/box is how its narrative spreads across its fourteen different pamphlets, posters and books, forcing the reader to choose where to begin and how to progress. Clearly there are a bucketload of different ways to read Building Stories—every reader has to assemble a story based on the book’s discourse. I’m using the terms “story” and “discourse” according to their definitions in narratology (most notably in Seymour Chatman’s book Story and Discourse [1980]): “discourse” is the way(s) the text itself presents its narrative—often with flashbacks, flash-forwards, and other chronological challenges—while “story” is the narrative we build in our minds, as we assemble said narrative into some semblance of chronological order based on the evidence in the text.

One illustration of how the distinction between “story” and “discourse” works is the mystery novel. Most mystery novels begin with a murder, but hide the identity of the murderer until the climax, and sometimes these novels end with a flashback that reveals (gasp!) that the butler did it. The discourse of our hypothetical mystery novel is out of chronological order, with the final scene jumping back to the beginning of the narrative, while the story in our heads places that last scene first. “Discourse” is how the narrative is told; “story” is our mental restructuring of the discourse into a coherent, cause-and-effect form.

Building Stories taxes our abilities to build a tight story out of its discourse fragments. If you begin the book by reading one of the “Branford Bee” pamphlets, for instance, and then read the volume designed as a children’s Little Golden Book, you’ll be hard-pressed to see connections between the two. You’ll have to wait until you stumble across the panel in yet another piece of Building Stories that indicates that “Branford Bee” is a bedtime story that the central protagonist sometimes reads to her daughter. Yet even though this information places “Branford Bee” in the same world as the human characters, it doesn’t tell us the order in which we should read “Bee” in relation to the main narrative. I suspect that no matter how much I analyze Building Stories, some challenges and ambiguities will remain. 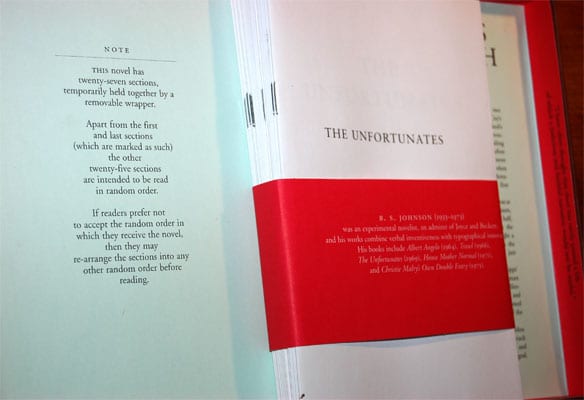 During our interview, Ware mentioned one specific inspiration for the modular design of Building Stories, a novel by B.S. Johnson titled The Unfortunates (1969). I’m not yet familiar with Johnson’s work—I have since ordered a copy of The Unfortunates—but Charles Taylor’s New York Times Book Review piece on the 2009 reissue of Johnson’s book makes clear its influence on Ware:

“The Unfortunates” comes in a box of 27 unbound chapters (plus the novelist Jonathan Coe’s invaluable introduction). The “First” and “Last” chapters are designated as such. The intervening 25, ranging from 12 pages to a single paragraph, are to be read in any order we choose. Far from some modernist stunt, the form of the book dovetails beautifully with Johnson’s subject—the accidental yet persistent nature of memory.

Ware further pointed out that Building Stories was named after B.S. Johnson’s initials, and perhaps the B. and S. on the cover of Ware’s box are placed in close proximity in further tribute to Johnson.

I look forward to reading The Unfortunates, but in the meantime I’ve been mulling over the similarities between Building Stories and a tendency towards “puzzle films” in contemporary American cinema. In an on-line article about Inception (directed by Christopher Nolan, 2010)—which, incidentally, is followed by a long comment by Kristin Thompson about whether or not Inception was based on a Don Rosa Uncle Scrooge story, “The Dream of a Lifetime!” (2002)—David Bordwell offers the following thumbnail description of this trend towards increasing complexity:

For a couple of decades, some American cinema (both Hollywood and indie) has been launching some ambitious narrative experimentation. We’ve seen “puzzle films” (Primer), forking-path or alternative-future films (Sliding Doors), network narratives (Babel, Crash), and other sorts. This trend isn’t utterly new—there are earlier cases, especially in the 1940s—but it seems to have been accelerating in recent years, particularly after Pulp Fiction (1994). Christopher Nolan has participated in the trend as well, with Following and Memento.

It seems to me that much of this “narrative experimentation” is a result of extreme disjunction between the stories and discourses of many of the movies that Bordwell cites. In Pulp Fiction, the granddaddy of the trend, the discourse is out of chronological order, prompting us to build a timeline in our minds as we watch the film. (One example: Pulp Fiction’s plot ends with Vincent [John Travolta] and Jules [Samuel L. Jackson] strutting out of a diner, but spectators assembling a story out of Tarantino’s scrambled plot know that Vincent will die soon after this scene in the diner.) So too Memento, whose plot alternates between color scenes presenting a portion of the story in backwards order, and black-and-white vignettes that progress forward in story time. (After sending this piece to TCJ, I listened to a recent Pop Culture Happy Hour podcast where critic Glen Weldon made a similar comparison between Building Stories and scrambly movies like Pulp Fiction; listen to that episode of PCHH here.) I feel silly comparing Pulp Fiction and Memento to Building Stories—the noir aesthetics of these movies seem a world away from Ware’s focus on everyday intimacies—but all of these texts play extreme games with the distinction between story and discourse, and I wonder: is there a vanguard of narratively complex American pop culture texts? If so, is it accurate, useful and generative to consider Building Stories a part of this vanguard?

Ware’s story/discourse manipulations aren’t limited to the relationships among the fourteen separate components of Building Stories. Even the discrete pieces of Ware’s box confound reader expectations, leaping forward in time or folding back on themselves in complex ways. In the version of Acme Novelty Library # 18 included in Building Stories (I believe the Building volume has two pages not originally in that Acme issue), there’s an early strip, “My Life,” with two panels of our unnamed protagonist, the dark-haired woman with an artificial leg, riding the subway and staring at a young, affectionate couple:

In a later strip in the book, titled “Her Leg,” our heroine thinks back to the couple on the subway, remembering that they noticed her artificial leg. Here’s the first couple of tiers of “Her Leg”: 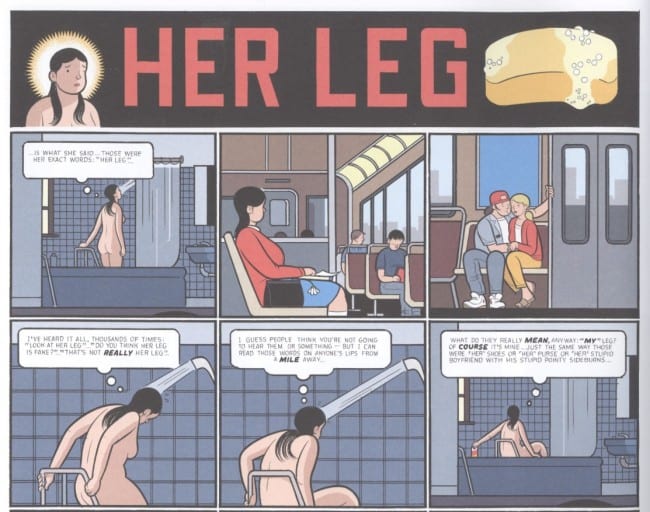 When I interviewed Ware in Columbus, I asked him about this. I wondered why he opted to tell the story of the subway ride in an interrupted, recursive, non-chronological way, rather than in a linear fashion. Ware responded by saying that the “Her Leg” strip was a meditation on the instability of memory, and when I asked him to elaborate, he pointed out a subtle but significant difference between the two scenes on the subway: the first scene, portrayed as it happens in the present, takes place at night, while the second is misremembered by the woman (and colored by Ware) as occurring during the day.

I missed this completely, and I’ve subtitled this essay “Notes on Building Stories” because I wanted to express some tentativeness. It’s clear that I need to live with Ware’s book for a while, revisit it, and experience its interlocking parts in various ways.

So: Building Stories. Take your time, and read it more carefully than I did. And a melancholy coda: the themes of fragmentation and flawed memory became more relevant to me immediately after my interview with Ware, when a CCAD techie told me that the recording of the interview was messed up—we got visuals but no sound. Did I actually say all the things I’m now claiming that I did? Did Ware? 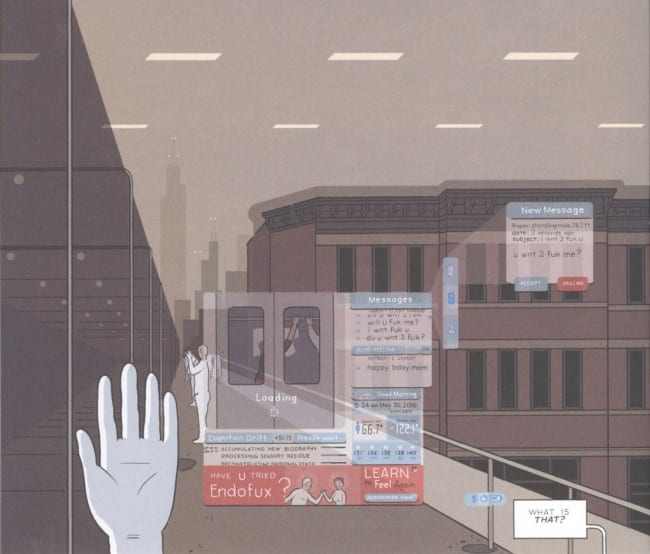 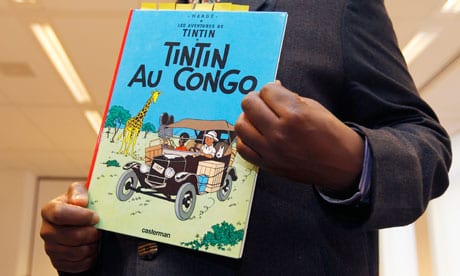 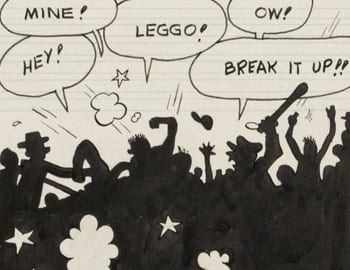