Writer, artist, editor, and lyricist Nick Meglin (born Nick Megliola) was perhaps best known for the 48 years he spent on the staff of Mad magazine, the last twenty of which were as co-editor of the magazine (with colleague John Ficarra), surviving Mad’s original creator Harvey Kurtzman, publisher William Gaines, and most of the original Mad artists, such as Wally Wood, John Severin, Jack Davis, and Will Elder. 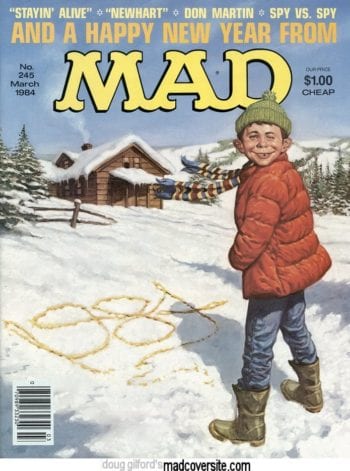 After Kurtzman’s abrupt departure from Mad to create Trump for Hugh Hefner, Meglin was one of the few staffers who stayed with Mad to work under new editor Al Feldstein. Originally credited as an “idea man,” Meglin only had ten published bylines during his nearly half-century tenure on Mad, but was an essential editorial force in the magazine’s longevity and success, generating ideas for covers, articles, and premises, as well as writing many of the ads and other editorial material, and helping other writers including Dave Berg, by punching up their scripts. During Mad’s heyday, Meglin was often featured in the magazine’s ad parodies, often as punks and delivery boys, and notably as a motorcycle cop who had just pulled over editor Al Feldstein. 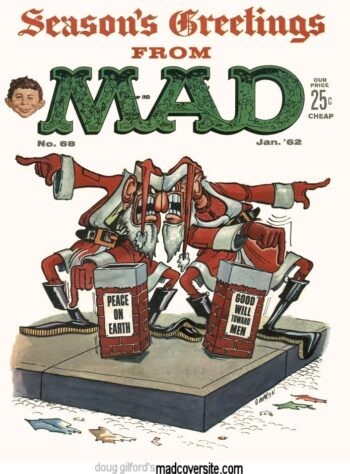 At various times, Bill Gaines called Meglin “the heart of Mad” and “the soul and conscience of Mad,” and he was responsible for recruiting many of the artists and writers who eventually came to be known as “The Usual Gang of Idiots” after editor Feldstein got tired of listing individual credits in the masthead of the very first Mad annual, The Worst from Mad #1. It was Meglin who recruited old friend Frank Frazetta to paint a spot-on visual parody of the painted Breck Shampoo ads of the mid-'60s that featured long-haired Beatle Ringo Starr, an assignment that led to Frazetta becoming one of the top movie poster artists of the 1960s. Although an accomplished artist himself who earned a certificate from the School of Visual Arts (where he met lifelong friend and colleague Angelo Torres), Meglin (as he would have readily admitted) was not in the same league as some of the artists he hung out with in the legendary Fleagle Gang, a group that included Frazetta, Al Williamson, Roy Krenkel, and future Mad contributors Angelo Torres (a classmate at the School of Visual Arts) and George Woodbridge, with Wally Wood often named as an “Honorary Fleagle.” Meglin had a few credits in the 1950s comics business, including assisting Angelo Torres on a “White Indian” story, and a Crimson Avenger back-up tale (“Captives of the Blackfeet”) in the Masked Ranger comic, as well as contributing story ideas to EC’s Mad knock-off title Panic for Al Feldstein. Oddly enough, one of his early jobs for EC was scripting the advertising comic Reddy Kilowatt #3 in 1956 (which boasted art by EC regular Joe Orlando) and hinted at the versatility Meglin would display during his long career.

However, his main contribution to pictorial literature can fairly be said to stem from his long tenure on Mad. Meglin the humorist may not have been as innovative as Harvey Kurtzman, nor as influential as Al Feldstein, but Mad simply wouldn’t have been the magazine it became without Meglin’s behind-the-scenes influence and ideas. In his own obituary, long-time friend, writer Mark Evanier, was of the opinion that it was Meglin, more than anyone else following Harvey Kurtzman’s departure from Mad, who helped shape the magazine’s sense of humor from 1956 through his retirement in 2004. This opinion is supported anecdotally by many of the writers and artists who passed through the magazine’s doors since its inception in 1956. Veteran Mad writer Frank Jacobs, aptly noted in The Mad World of William M. Gaines, “Thanks in great part to Nick Meglin, who served as a kind of talent scout for writers, an elite group emerged in the early 1960s, which has carried the magazine to the present.”

A Brooklyn native, Meglin graduated from Brooklyn College in the mid-'50s. As part of the “Fleagle Gang,” Meglin had strong ties with EC Comics, and was there to help out Bill Gaines and Al Feldstein when Harvey Kurtzman abruptly left Mad in the midst of putting together issue #29, which was only half-finished. Meglin wrote some material for that issue, and stayed on as “an idea man,” planning to work at Mad for only two years or so. However, except for a short stint in the Army in the 1950s, Meglin stayed with Mad until his retirement in 2004, moving from idea man to contributing editor to co-editor upon Al Feldstein’s retirement in 1984. 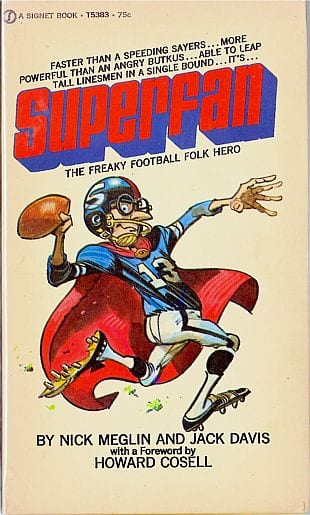 Although Mad occupied the bulk of his career, it was far from the sum total of the prolific Meglin’s achievements. Among his other projects was the Superfan comic strip he wrote for Pro Quarterback magazine in the early 1970s, which was illustrated by Mad colleague Jack Davis. These strips were collected into two Signet paperbacks, entitled Superfan and Superfan… Again! Meglin also authored several books on art and humorous illustration in particular, an outgrowth of his work as an instructor at the School of Visual Arts. Among the many books he authored are Drawing From Within: Unleashing Your Creative Potential (co-written with daughter Diane Meglin, 2008); The Art of Humorous Illustration (1981); On the Spot Drawing (1969); Fountain Pen Drawing (1973); and the humorous cartoon book, Honor thy Godfather (1976). In addition to the many Mad paperbacks he edited, Meglin was also a contributor to the fanzine Squa Tront, where he wrote two installments of reminiscences of the Fleagle Gang, titled “Days of Wine and Fleagles”, and later rewrote that material for the notes for the Valor and Piracy volumes of Russ Cochran’s Complete EC Comics Library. In addition, he wrote a famous profile of friend Frank Frazetta for American Artist magazine, which was the only issue of the magazine to sell out completely. 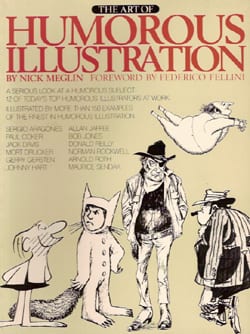 Over the years, Meglin’s creative efforts were wide-ranging and surprisingly diverse. A Renaissance man with a restless intellect, Meglin wrote scripts for the ‘60s cartoon Batfink, and for The Pink Panther, working with his son, Chris. In addition, he wrote various musical theater productions later in his life, contributing both the book and lyrics to Tim and Scrooge, an unofficial sequel to Dickens’s A Christmas Carol with music by Neil Berg; later, Meglin again teamed up with Berg and a librettist named Dan Remmes on a musical based on the Walter Matthau-Jack Lemmon comedy Grumpy Old Men. Meglin’s lifelong love of playing tennis prompted him to identify himself as Mad’s “Tennis Editor” on his business cards, as well as contributing to Tennis magazine. He also drew sketches for Opera News and wrote for The New York Sunday Times. Meglin turned his comedic talents to comedy records, supervising Mad Magazine Presents Gall in the Family, based on Larry Siegel’s parody of the famous sitcom. Additionally, Meglin contributed dialog and song lyrics to satirist David Martin’s album Richard the 37th: The Agnew and the Ecstasy (1969), as well as an audio play from The Crazy Gang entitled Everything You Always Wanted to Know about the Godfather. But Don’t Ask. In a more serious vein, Meglin wrote material for some audio plays created for the American Cancer Society.

Upon his retirement, Meglin moved to Durham, North Carolina to be close to his children, and continued to write and teach illustration. He passed away on June 2, 2018 from a sudden heart attack, only a short time after appearing at a gathering of the National Cartoonists Society. Meglin is survived by his partner Linda Maloof, his brother, Albert, his sister Joyce Wessel, his children Chris and Diane, and three grandchildren. 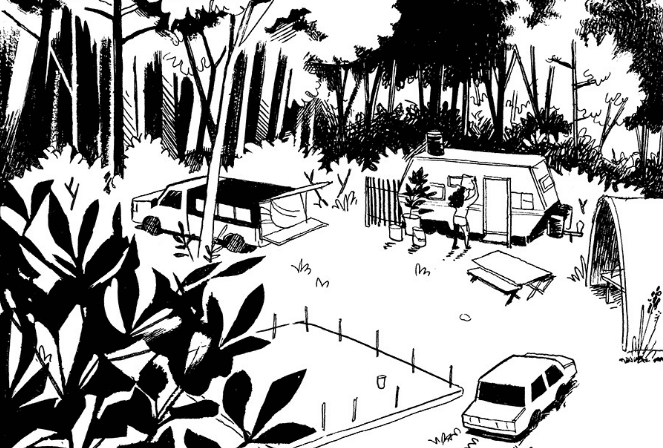 Later than You Think 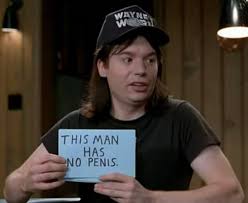