Inspired by Dan's recent readings riff, I thought I would write something about the comics on my desk - the kind with staples and the kind on the computer. 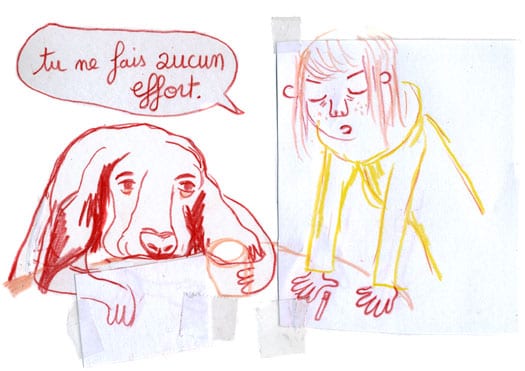 Julie Delporte has a tumblr where she posts short comics that I really like. I don't have any books by her - I've only seen her work online. Drawn directly in color, Delporte's short stories read like a handwritten letter from a dear friend. They are in French with translations in the post - so there is a nice disconnect for me where I just stare at the page and soak it all in - sort of understanding bits and pieces of it thru the images and then reading the translation. Usually the stories are one or two pages and feel like poems. But good poems - written by that same old dear friend. Totally my cup of tea. Check it out.

Dane Martin is another cartoonist I know through tumblr. Lots wacky stuff that makes me laugh - a sort of cracked out version of the comic strip Shoe. I think Dane said that about his own work. Don't blame me if that tag sticks. His stuff goes by fast and furious on tumblr. Funny animals at their finest. Or worst. Depends on Dane's mood. A Kevin Huzienga favorite. Check it out.

One last tumblr shout out: I really like SNAKEBOMB. I think maybe I met the guy who does SNAKEBOMB - Jack Hayden - at my talk in Portland - I dunno, it was a crazy night. Anyways, this is a fun one to follow and the enthusiasm for comics is evident in the posts. Cool shit. Check it out.

Aidan Koch may be on most readers' radar - but did you know that she has begun serializing a new story called The Blonde Woman over at Study Group?

I really like the painterly-ness of Aidan's approach. She composes directly in color and the handling of the paint is as much of an expression of emotion as her linework. The open, elegant drawings are contained nicely by grids in certain places. Her sequencing is getting more fluid - this story feels less like a painter making comics and more like a comics artist making painterly comics - which means something in my book. Anybody can string pretty images together - but sequencing and timing is it's own game. Also she is working on parchment color  paper then white is a color - her restraint is worth noting. Exquisite naturalism in her rendering that is never ham-fisted. Aidan makes it look easy. "So simple you can't cheat," as the saying goes.

The Blonde Woman will make a beautiful little book someday - but until then - check it out on the web every Tuesday at Study Group.

The great Mardou has a new book out. Don't know who Mardou is? For shame, for shame, for shame. To get you up to speed, here is an old review that I did of Mardou's work back in some other elseworld incarnation of The Comics Journal:
---
Manhole #3 (2008)
and
Washing Machine (2007)
By Mardou

Two amazing comics from out of nowhere, but really, by a young woman living in St. Louis. I’d seen Washing Machine around but never read it, honestly because the scale is improper for the format of the book. Meaning it was drawn at a scale that would be comfortable to read on the original page, but in reproduction, in reduction the art suffers. It’s still great, but just hard to read. Mardou corrected this problem with Manhole #3 and the whole presentation is just a jewel to behold, what a development in a quick year.

Manhole is an amazing feat of drawing (but please change the title, please?). Throughout a brilliantly formatted square 8 x 8 polished zine, Mardou astounds the reader with a 38 page burst of precision and feeling. She limits her panel structures and leads the reader around a story of young people (girls) in England having English problems and affairs.

I sort of read it. There’s a lot of dialogue and talking and even though she balances it all quite well to allow the narrative to unfold, I was more interested in just looking. Looking at the really fantastic feminine line of the figure drawing. Incredible naturalistic scenes of people hanging out and living their lives, just gorgeous stuff. Mardou really captivates because it’s from a girl’s POV, not a guy using a girl’s voice to tell a story, y’know? She can really draw AND make her transitions work, I could read it without reading it and that is the key to all comics making to my mind. That said, it’s a little crowded, lots of words and well, from what I read it was great. Funny anyhow.

Washing Machine was the one I really read and studied though after I got over how small it was. There’s a semi-grid of four horizontal tiers and the story of a girl and a guy plays out at a nice clip. It’s a funny High-Fidelity / Woody Allen kind of “comedy” again from a girl’s POV that feels natural. The drawing is tight and the dialogue is snappy. This one didn’t feel crowded and I laughed all the way through. It’s a really ambitious comic, actually, with a lot of characters and one-liners and a really hi-larious, tragic-comic ending.

BACK TO THE PRESENT 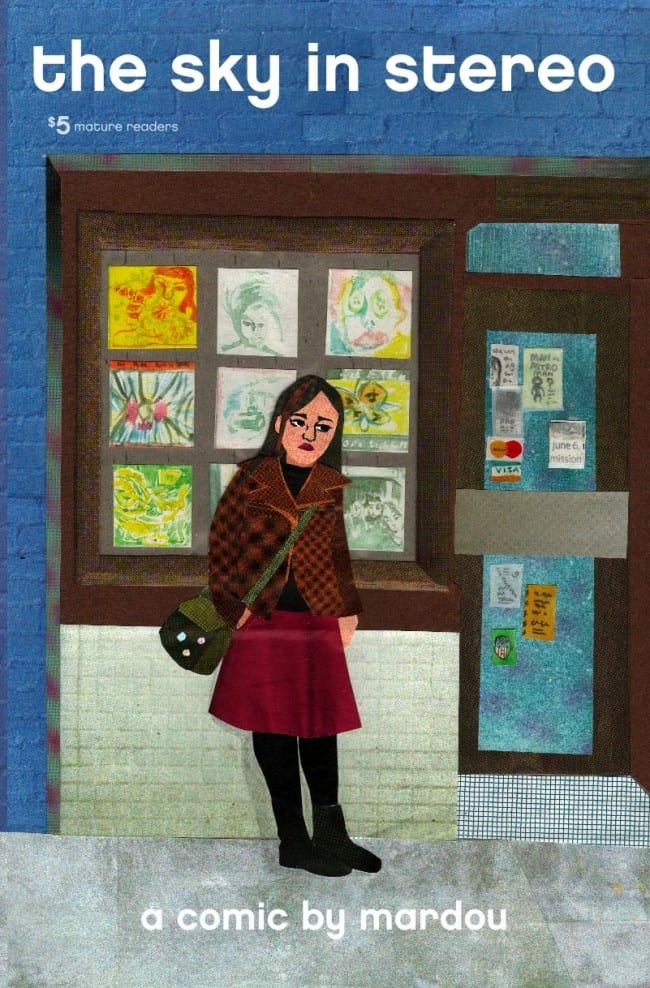 Mardou's The Sky in Stereo just arrived in the mail. This is the one to mail order, folks. Buy your Christmas stocking stuffers early. A perfect must have for any girl you know who likes comics but who thinks she is probably too cool to read them. This is the one to get her. Definitely get one for any girl you know who likes comics - and one for any guy you know who likes girls who like comics. Does this sound sexist or something? Sorry. All I mean is that The Sky in Stereo is like a modern romance comic and I think it would be appreciated by those who don't read comics (i.e. most girls).

I'm really in love with autobiographical comics from the 90s right now  - so a brand new thinly veiled autobio strip set in 1993 is like a drug for me. I snorted this one right down. Love the clean stage blocking - the movement of the figures - the clarity of it all - in such counterpoint with the post post Fort Thunder messy boyz aesthetic raging these days.

Mardou can really set a scene and clearly transition from one into the next - there's a great sense of timing and comedy - comedic timing - whatever. I laffed a lot reading this one. A story about being young in Manchester, England. Sex, drugs, burgers - the usual. A quick moving quarter pounder packed with great drawing, great characters and excellent, believable dialogue. 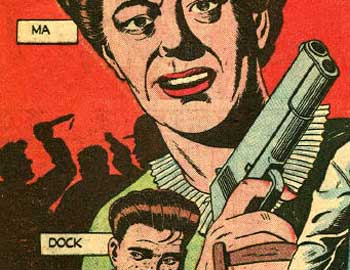 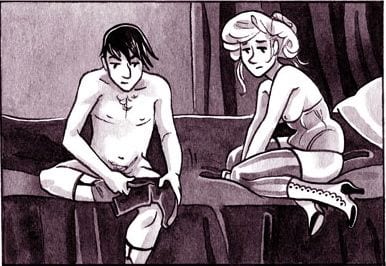 VERT! and the Single Girl