Welcome to New Talent Showcase. This week I've rounded up Ariel LeBeau and Matt Seneca to write reviews while I tracked down a mysterious tumblr that I have been following. Ariel wrote about Lala's new zine and Matt wrote about Aidan Koch's new newspaper comic and I talked to Simon Hanselmann about his war on print. Please enjoy. 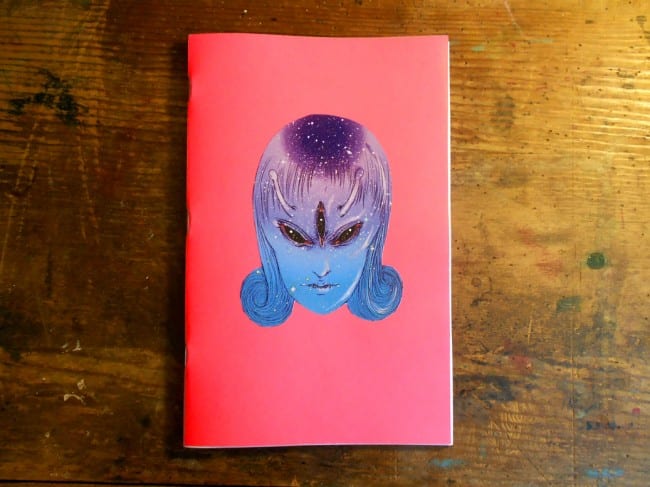 I was introduced to Lauren 'Lala' Albert and her work a few weeks ago at Frank's comic sale and was immediately drawn in by her aesthetic. This zine, Alien Invasion Vol. 2 is what she describes as "a collection of drawings and observations on the lifestyle and culture of a still mostly unknown alien race," which seems to be the central theme of most of her work. In about a dozen and a half pages Lala dissects multiple facets of a bizarrely beautiful people, from their biology to their fashion. Delicate contour lines, understated pencilling and minimalistic single-page compositions all contribute to a straight-forward simplicity that makes the book feel referential, analytical; like the found field journal of a physiologist from another world, complete with sporadic expository annotations. The subject matter, meanwhile, is so ethereally exotic that at moments it feels like drinking in the visuals of a Lady Gaga video. (Totally not in a bad way: look at these aliens' evening wear and tell me they wouldn't fit right into Alexander McQueen's Spring 2010 collection.) Either way, Lala renders her creatures with tremendous sensuality. Which isn't to say eroticism, i.e. fetishizing the body as a sexual object, but rather it directs a pictorial investigation of the body as a biological specimen. (This is made doubly remarkable, however, given that the visual culture we occupy thrives on the ability to fetishize literally anything in a libidinous context.) 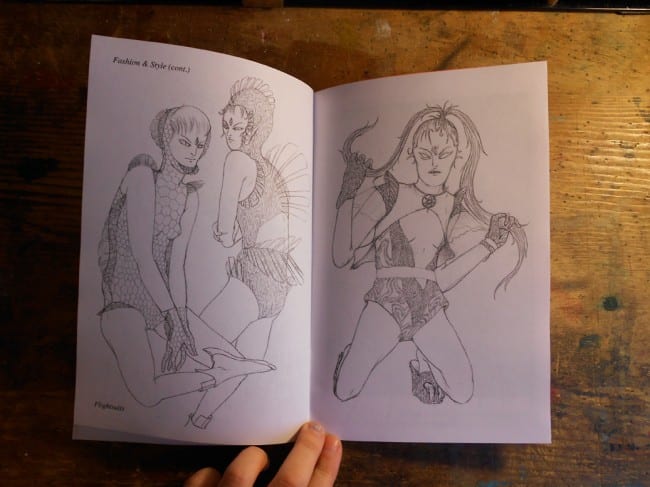 The bulk of Lala's work seems to be made up of illustrations like these, which is clearly where her strength lies, though she also dabbles in comics (she is featured in the new issue of Happiness Comix), which I for one feel eager to see more of. With the originality of her drawings and their seemingly tremendous capacity for narrative, I would be interested to see Lala get more experimental with sequence and see what happens when she flexes her storytelling muscles. 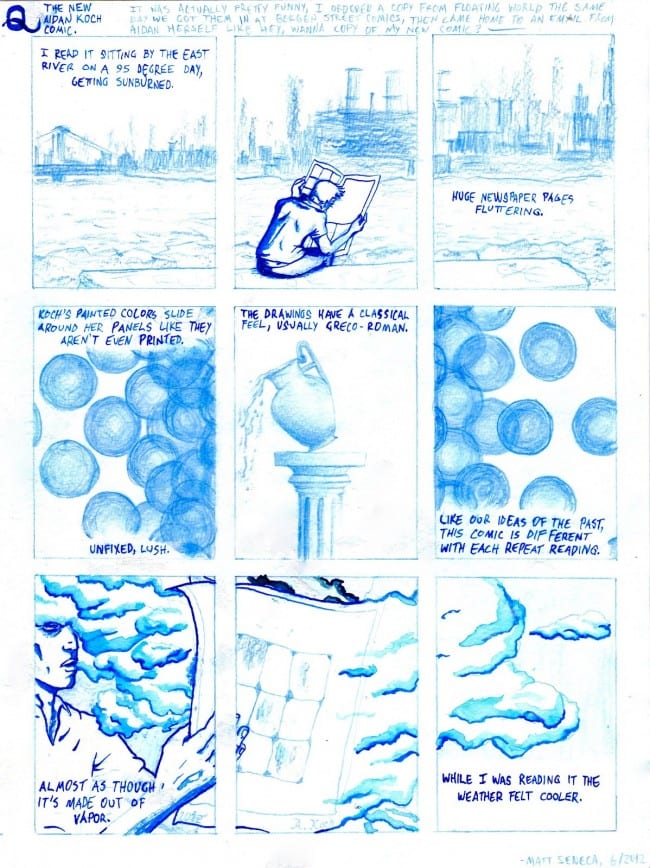 You can buy Q by Aidan Koch from Floating World. Check out Aidan Koch's website here. She also has a tumblr.

--------------------
I've been following this tumblr called girlmountain - having no idea who was behind the insanely funny and well drawn comics that were being posted. So I sent a message in a bottle. Something along the lines of "Can you write me a short report about what you are doing so I don't have to guess? I like your comics and want to write about them." And I got back this:

Simon Hanselmann: I'm Tasmanian (side note: Tasmania has a fine history of producing awesome cartoonists. We are the New Zealand of Australia). Recently I was living in the UK for a few years, hiding, playing shabby noise-shows and drawing a lot. Currently I live in Melbourne, "Arts capital of Australia". My two favourite Australian cartoonists live here too, which is awesome.

I've been drawing comics and making little booklets and distributing them around since I was 8 (first comic was a Mad magazine rip-off with a "free" Garfield print bandaid taped to the cover). Now I am 30. And I still draw comics. And more comics. And more comics. I rarely leave the house if I can help it. Recently I lost my dayjob and got a small redundancy and have just been drawing all fucking week non-stop until 6 in the morning. It's the most fun ever. I want it to last forever. Need to learn how to dumpster dive. I've grown soft.

I put a sizeable bunch of work online like 2 months ago for the first time ever declaring a WAR against the assemblage of "booklets". I was sick of spending hours sewing books together and having to leave the house to make photocopies. Also due to my stupid full-colour 64page books and my pledge to "keep prices low" I was making no fucking money. So I figured why the hell not just put it all online? At least then people will see it and perhaps know that I exist outside of my circle of friends and perplexed people at shabby, shirtless noise-shows. Maybe a publisher will "scout" me?

I read what you wrote somewhere a week or so ago about tumblr being an interesting, viable platform for cartoonists (or something... excuse my utter stonedness). But yeah, it's really fucking worked for me! In 2007 I used to send shit to Global Hobo and USS Catastrophe and I sold a bunch of books and got a review in 'The Drama' magazine which prompted a dreamy "Harkham email" and it was all okay, but fuck! Tumblr! Fucking tumblr! in the past two weeks "Megg's Depression" has gotten almost 2500 "reblogs/likes" (which seems pretty good for "alternative comics") AND I've had emails from magazines wanting comics, good small press offers and fucking "interest emails" from fucking publishers who shall remain nameless... I'm really actually shitting myself. It's like a fucking teen dream come to life. I've never been more nervous or excited about anything in my life. Jesus Fucking Christ.... my inbox terrifies me at the moment. "Yeah, let's do it. Let's print this unknown Tasmanian's stoner-meaness witch-comics. Let's make teen dreams come ALIVE!"....

Anyway, I'm working on a bunch of shit currently:

- Got 140 pages of megg and mogg stuff in the can, have thumbnails for around another 80 pages of episodes. will no doubt write more. i work on it every second I can spare 'cause it's my favorite. It's getting slightly more "arc-ish" as it goes on and should function decently as a "graphic novel".

- "Megg's Coven" is a darker, more depressing M&M saga which is being serialized quarterly in a Melbourne comics newspaper called Dailies. It'll run around twenty pages, I'm not sure, it exists as notes. It is currently intended to be an "ending" to the whole Megg and Mogg thing.

- Currently working with Radical Fortress on some posters of my "lingerie witches" and some books, a strip for Gang Bang Bong 3, and a mini for Spaceface all of which will debut at the Brooklyn Comics
& Graphics Fest (HOT).

- Got an art show in September in Melbourne with my number one "doodle-buddy", HTML flowers. we're doing a bunch of paintings and shit and a new drawing book in which we will begin to "build a city", "slowly". Also we'll play music. And give away cheese on the first night.

- I'm also (totally a cliche at the moment) working on a bunch of animation pitches with an old school-friend who works at at a fancy Hollywood studio now. I've been kind of flakey with it though... I just want to draw comics!!! Forever!!!

- Got a 244 page, full-colour, teen-drama, "graphic novel" called "girl moutain" sitting next to my bed that took me five years to finish. I want to edit it and add a few more bits and then I'll be happy enough with it. It's the first quarter of a very long story involving black magik, drugs, space travel, solitude and cross-dressing. the plan is to finish Megg and Mogg to a satisfying temporary conclusion get it released, then edit girl mountain book one, get it released and start drawing the second book of it...

... That's the bulk of what i'm working on. i might make a cooking zine with my girlfriend. or we'll resurrect our classic-style late-night talk show from last year. who knows? shit could go in any direction with this frightening potential getting published business.

Cheers, Frank. Press is exciting!! (unless this is a smear piece...) 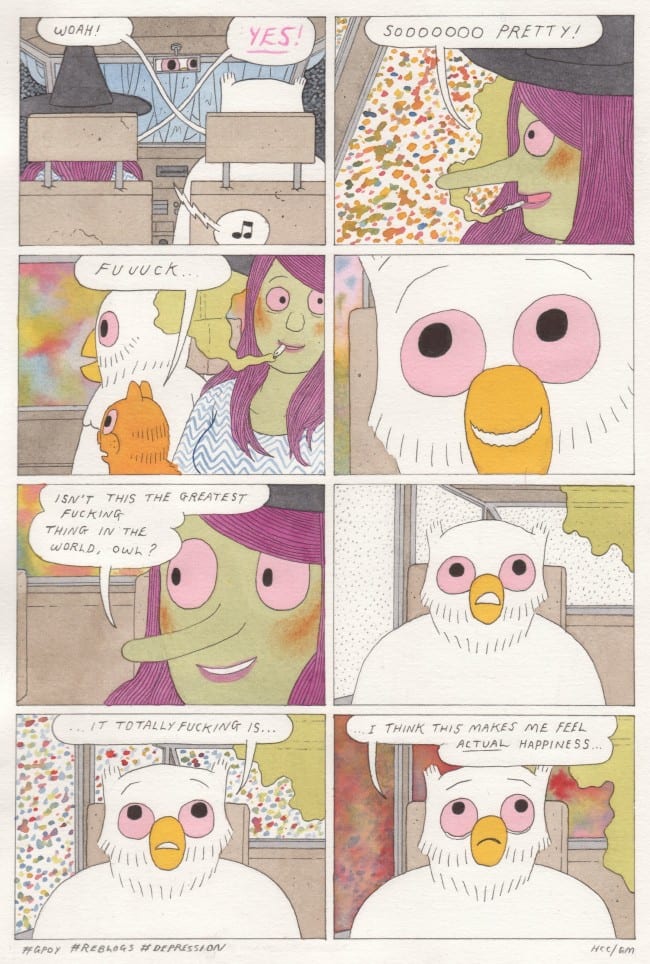 ===============
Frank here. I enjoyed Simon's email response so much that I wrote back, "Let's make this more like an interview" and sent him a few follow up questions:

Frank: "What comics did you grow up on? What was available to you down there?"

Simon: Desite my Dad being a biker and my Mum working in biker-bars I was always a "nerd". I remember being obsessed with a Spiderman comic when I was 5, then through the school library I got heavily into Asterix, TinTin and Lucky Luke, all that stuff... also Disney Ducks... soooo many ducks. and I had a big Mad phase (my friend's Dad worked at the city dump and used to find boxes FULL of old 60's and 70's Mads). I used to trawl second hand bookstores for all this stuff... When I was about ten we got an ACTUAL comic book store in Launceston and I got really into McFarlane's Spiderman and was buying fucking Wizard, doing heavily pencil-shaded pictures of Cable from X-Force. Then when I was about fourteen I started hanging out with a bunch of cool "stoner grunge dudes" and was introduced to Hate and Eightball and Acme and Joe Matt and all that 90's awesomeness. So yeah, despite Tasmania's tinyness there was an abundance of stuff around if you were so inclined and didn't want a girlfriend.

Frank: "Did you always do comics or did you study, uh, art?"

Simon: I started drawing comics a lot when I was about seven and soon after started "printing" books at the local newsagents which I would try to sell on the playground, but I hated school with a passion and each year would have at least a few months worth of absent days. My Mum was kind of "cool" and figured if I hated school so much why force me to go? For a while she home-schooled me... High school sucked, I got bullied a lot and had green hair (modeled after Enid from Ghost World), in my last year I just stopped going altogether (mainly due to the principal trying to shut down my small-press activities. Fuck you, Mr Fagan, who's laughing now?...). I later tried going to "college" and did graphic design and writing and shit but mostly me and my best friend would just get high and call in bomb-threats to the school. Halfway through the second year we both dropped out (he's now a senior animator at big Hollywood studio and I'm doing "okay"), I considered doing the art school thing but instead just became a reclusive hyper-doodler, getting by on unemployment benefits, working a day-job only when forced to.

Frank: Explain Tasmania to the knucklehead Americans who don't know where
Australia is...

Simon: Well, Tasmania is an island at the bottom of Australia (low down, close to all the ice), it is technically the sixth state but is pretty much a whole different country. A backward, inbred, frightening, gin-soaked nightmare. It IS pretty though. But the people are all fairly horrible. My home town is known for it's epic crime rate and famous murderers. Plus there's all the super depressing convict history, they used to keep all the women in a cave on Sarah Island. There's some "great" history like the "black wall" wherein all the white settlers joined hands across the island and walked it's length, flushing out all of the remaining aboriginals. Fantastic. 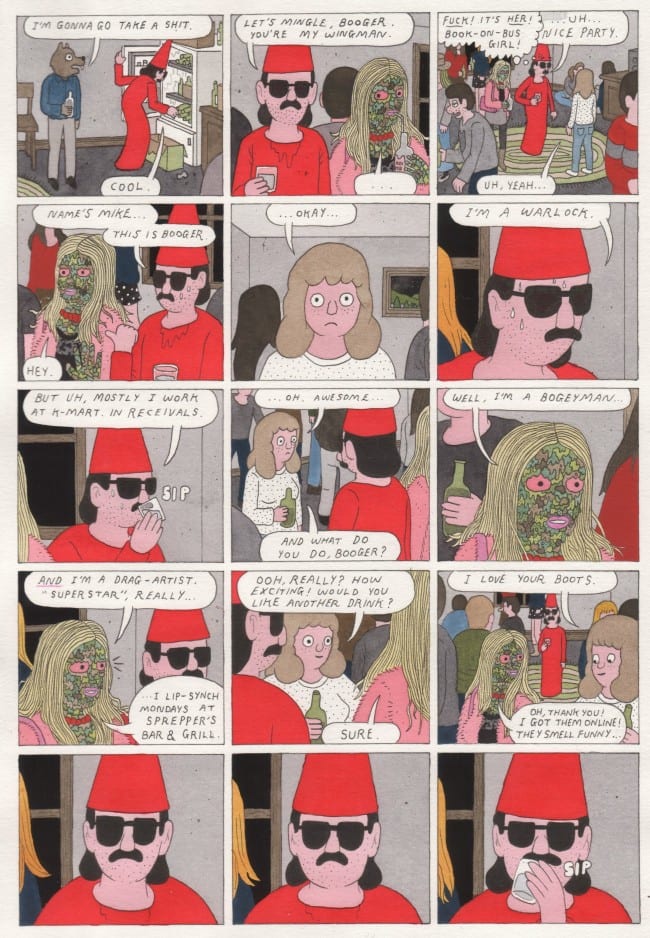 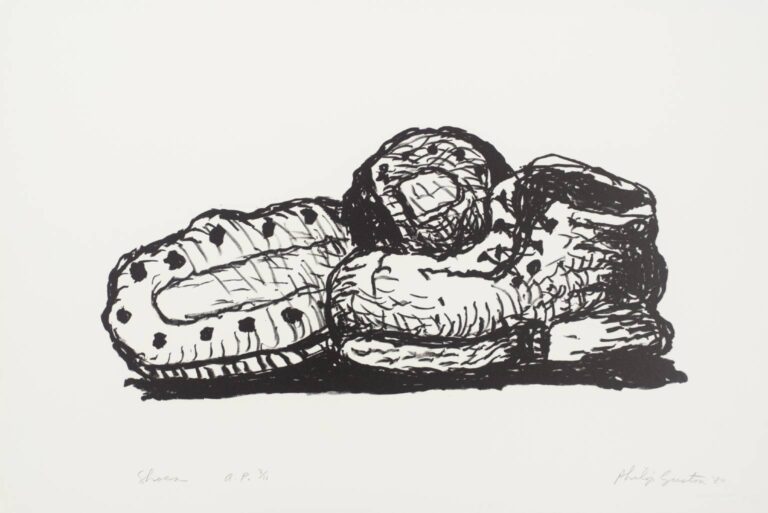 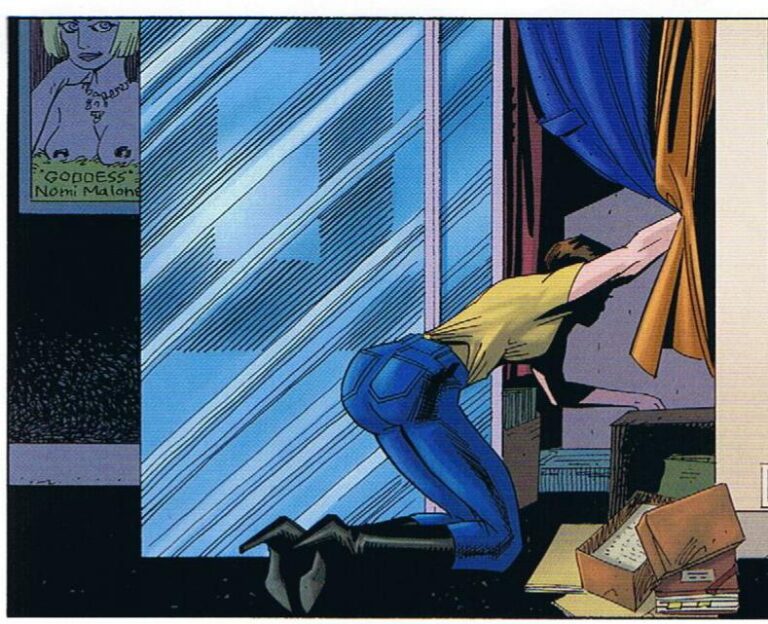