Excerpted from I Only Read It for the Cartoons: The New Yorker's Most Brilliantly Twisted Artists (New Harvest), on sale this Tuesday. Richard Gehr and Comics Journal co-editor Timothy Hodler will discuss cartooning and cartoonists Sunday, October 12, 2 p.m., at BookCourt in Brooklyn.

What family man can’t relate to the Zachary Kanin cartoon in which a king sits forlornly on his throne and muses to an expressionless guard, "I want to be feared as a tyrant, loved as a father, and revered as a god, but I also want them to think I’m funny"?

With a knack for absurd gags and self-deprecating humor, Kanin is in many ways the new face of New Yorker magazine cartooning. He also numbers among a small subcategory of TNY artists who draw for the magazine to supplement a significantly different day job, which, in his case, involves a steady gig as a Saturday Night Live writer for. He has numbered among the magazine's most frequently published artists in recent years, with some three hundred published panels representing the current state of gag cartooning while alluding subtly to the tradition’s past masters. 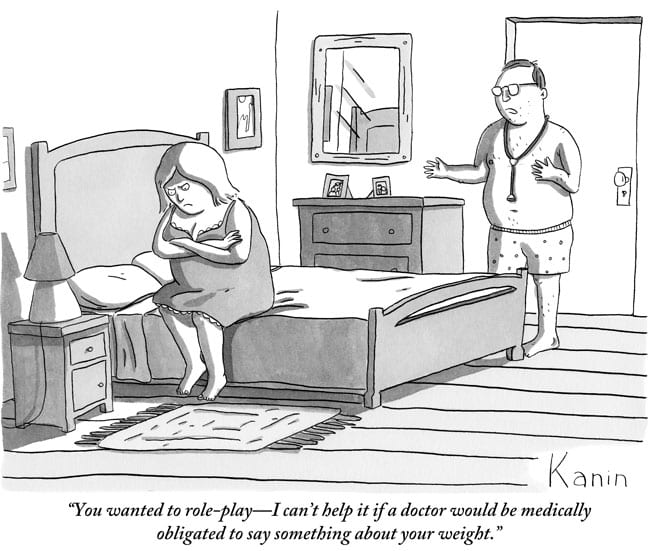 Kanin’s style isn’t particularly easy to describe, and he sounds at a loss when asked to characterize it. If the best New Yorker cartoonists create distinctive and unique worlds, Kanin’s is a slightly surreal place where things have gone sometimes seriously awry. The word "weird" comes to mind, he says, but at the end of the day they really consist only of things that make him laugh. "I like it when they’re dark, but they’re not always dark, and I feel like everyone has a pretty big smile on their face even when they are. And I like it when they’re goofy."

Look at Kanin's work long enough and you may begin to feel like he’s on a one-man emasculation crusade. A woman brings nail polish rather than a nail file to her incarcerated dude. "Come out with your hands up—you’re surrounded by men with megaphones," says one of many such men circling a house. Three guys with saws work on boards suspended over cinder blocks in an image captioned "Remedial Karate." Kanin doesn’t necessarily agree with this reading of his work, however. "I think it’s less de-macho-izing than . . . I’m probably trying to think of what would be the worst way to do something. That’s probably what most of my cartoons and humor are like: Here’s our goal and then what’s the stupidest way to not accomplish it?"

But something even more fundamental drives his work once he thinks about it. "I don’t really draw necks," he decides. "That’s the best way to describe my pictures: None of the people have necks." 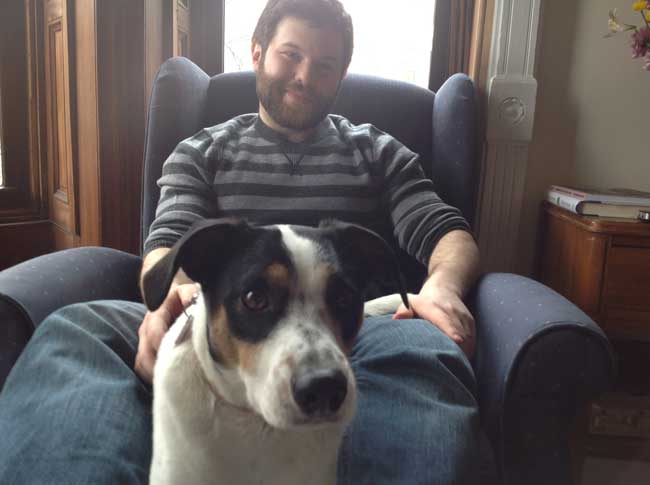 The bearded yet youthful-looking artist resides with his wife, Christina Angelides, an efficient-energies advocate for the Natural Resources Defense Council, in a brownstone building in Brooklyn’s upwardly mobilized Park Slope neighborhood. A wall of bookshelves contains mostly graphic novels and other comics collections by Frank Miller, Daniel Clowes, Ron Regé Jr., Geoff Johns, and many others. A large blackboard boasts a Kanin sketch of a bearded naked man in repose, a poof of gas emerging from the contented gent’s nether regions.

Zachary Joshua Kanin was born in Washington, DC, on September 20, 1983. His family moved to Newton, Massachusetts, some eighteen months later. Like his father, a compulsive doodler, Kanin has been drawing for as long as he can recall. "In preschool I would draw a lot of people with sharp teeth that were just lines. Eventually I realized that other kids used triangles, and I was like, ‘That looks much better than just a straight line!’"

Kanin attended Harvard, as did his father. A nominal English major thanks to the field’s relatively few requirements, Zach took more art than lit courses. He studied painting with cartoon-inspired Sue Williams and joined the Harvard Lampoon in spring 2002, eventually becoming its president. He arrived as an artist and describes his early writing efforts as "horrible." But he soon began carving out an increasingly important role for himself in this noted shortcut to the world of film and TV comedy writing. "I took it more seriously than other people did. Kids do treat it more pre-professionally now, and that’s probably smart.

"On the other hand," he continues, "I sort of liked the purity of it, that you do this funny stuff only while you’re there without worrying about where it’s taking you."

A week before graduation, a human resources person from The New Yorker called the [Harvard] Lampoon office to inquire if anyone might be interested in becoming cartoon editor Robert Mankoff ’s assistant. "I answered the phone, so I was like, ‘Yeah, I’ll do it,’" Kanin recalls. His interview with Mankoff consisted of the editor talking to him "for like an hour and a half, and then he was like, ‘I didn’t ask you any questions. Go write an essay.’" Kanin’s response included a section analyzing successful and unsuccessful drawings from the magazine’s cartoon archive.

At the time, the assistant art editor’s duties consisted of reading the mail and sorting out submissions from regular contributors. Kanin would then go through the hundreds of unsolicited submissions the magazine received each week and pick out anything showing promise amid the slush. Another large part of the gig involved sifting through the thousands of weekly Caption Contest entries, which took him two or three days. Other administrative duties included answering phone calls and e-mails, and he provided quality control for images and links on the magazine’s early website.

Kanin began submitting his own cartoons his second week at work. Technically, he’d mailed his first New Yorker submission to Tina Brown when he was but in second grade: "Hey, Tom," says one hunter to another while standing over Donald Duck lying in a pool of blood, "I think you'd better take a look at this one." His earlier rejection behind him, Kanin sold his first cartoon in September 2005. His timely rendition of "The 40-Year-Old Virgin Olive Oil," as its interior caption reads, consists of a half-empty uncorked bottle with flies buzzing about it. "It’s not one for the ages, but I was happy about it," he declares.

Mankoff offered his assistant a cartooning contract during the editor’s 2006 Christmas party. "I called my parents after the party, and I was really excited. My mom shook my dad awake and told him, ‘It’s like winning an election!’"

In August 2007, his assistantship ended. "Bob sort of pushes you along after two years, because he only has so many stories and needs a new audience," Kanin says with a laugh. "He was really very encouraging."

About four years later, after hearing that a couple of SNL writers were on their way out, Kanin submitted a package of sketches to the show. On September 20, 2011, the Tuesday before the show's 37th season premiere, Kanin entered the writers’ room around noon and worked until seven o’clock the following morning. Writing for television being an infinitely more collaborative effort than cartooning, Kanin is part of two small groups who like to work together.

Alone in his home studio, though, Kanin tends to type out his gags before drawing them. That doesn’t necessarily mean his captions come first, however. When working on a batch, he says he first comes up with several general categories to play around with. "I try to keep it varied. It might be a type of person, a profession, a place, an animal, or something like kissing someone’s ass. I’ll give myself ten minutes with each category to type as many jokes as I can. Some of them will have no caption, while others are just a punch line. It’s mainly a way to make sure I sit down and think of ideas for a solid hour." 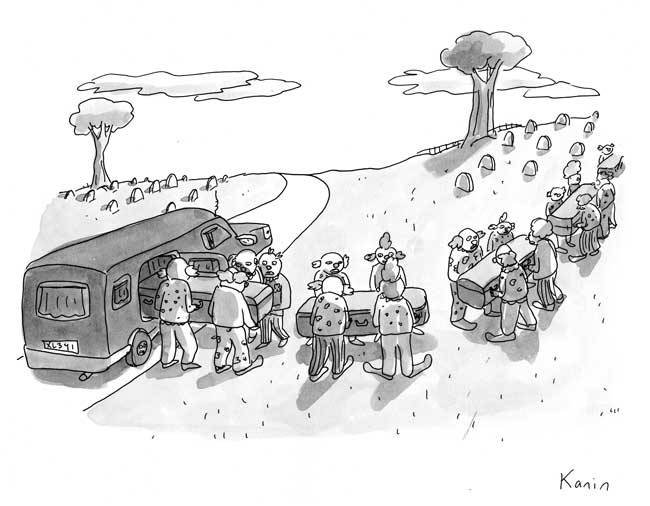 Since starting at SNL, Kanin will draw three or so smaller batches at a time, during breaks in the show’s schedule, and will submit them over as many weeks. These smaller batches consist of six to eight cartoons, as opposed to the dozen or so he’d previously cranked out. The larger batches may have included "five that I don’t even understand," in the hope that the competition’s not too challenging that week and the editors will find something interesting in them.

His new schedule also dulls the sting of rejection. "When you stay up all night Monday and Tuesday drawing and find out that it was all for nothing, that’ll really get you. But if I stay up all night Thursday through Sunday of one week, and then three weeks later one of my batches didn’t sell, I don’t care." Kanin admits that "a nice thing about having another job now is that I still feel really good when I do sell, but I don’t feel so bad when I don’t.

Kanin draws his roughs, which appear very similar to his finishes, with a felt pen on computer paper. He then puts the rough on a light box and traces over it with a black Uni-Ball Micro pen to sharpen his lines, cleans up his inks for shading, and turns it in. He used to use a nib pen but came to prefer Uni-Balls because "the line was freer from the constant dipping. I don’t know if the line quality is as good but the drawing definitely feels better when I have more control over it." He uses Strathmore 300 paper for roughs and 400 for finishes.

Every cartoon needs a setting such as a doctor’s office, restaurant, or prison, but Kanin generally eschews familiar setups like the desert island, slave ships, and the Grim Reaper as being too much like meta-cartooning, or a "game within a game." (In Kanin's one classic Grim Reaper cartoon, Death kills a man and his cat, and then stops to kill a houseplant on his way out while thinking, "God, I’m such a perfectionist.")

There’s darkness on the edge of Kanin’s world, but the violations are always benign. "A nice thing about cartoons," he says, "is that you can transgress all the way, because it’s just a drawing." Readers don’t always agree, as when The New Yorker published a panel in which two men with scalpels hover above an infant lying on a table as one says to the other, "There’s gotta be an easier way to get candy from a baby." Kanin received a lot of hate mail for that one, including recriminations for advocating infanticide. "In what way does this advocate that?" he wonders. "It goes without saying that no babies were harmed in the cartoon. I’m just saying that those guys are under the impression there’s going to be candy in there."

In truth, many of Kanin’s favorite cartoons contain elements of implied physical pain. Asked to name some of his favorite drawings, he mentions one in which a mother says, "I can feel the baby kicking," as the child she’s holding in her hands boots her in the face. In another, a dad swings a group of kids sideways in a painful parody of Newton’s cradle. His most recent favorite involves only emotional pain, however: An angry woman sits on the bed with her arms crossed as her stethoscope-sporting, boxer-shorted husband says, "You wanted to role-play—I can’t help it if a doctor would be medically obligated to say something about your weight."

Humor, Kanin believes, doesn’t come from a dark, unhappy place—at least not his. "I definitely talk about things I’ve done, or that are happening to me, in the worst possible light in order to find the humor in situations. Like when you’re having a bad day and stub your toe, forget to pay a bill, and so on. But my life’s pretty good," he says with a laugh. "I don’t have a lot of real complaints." 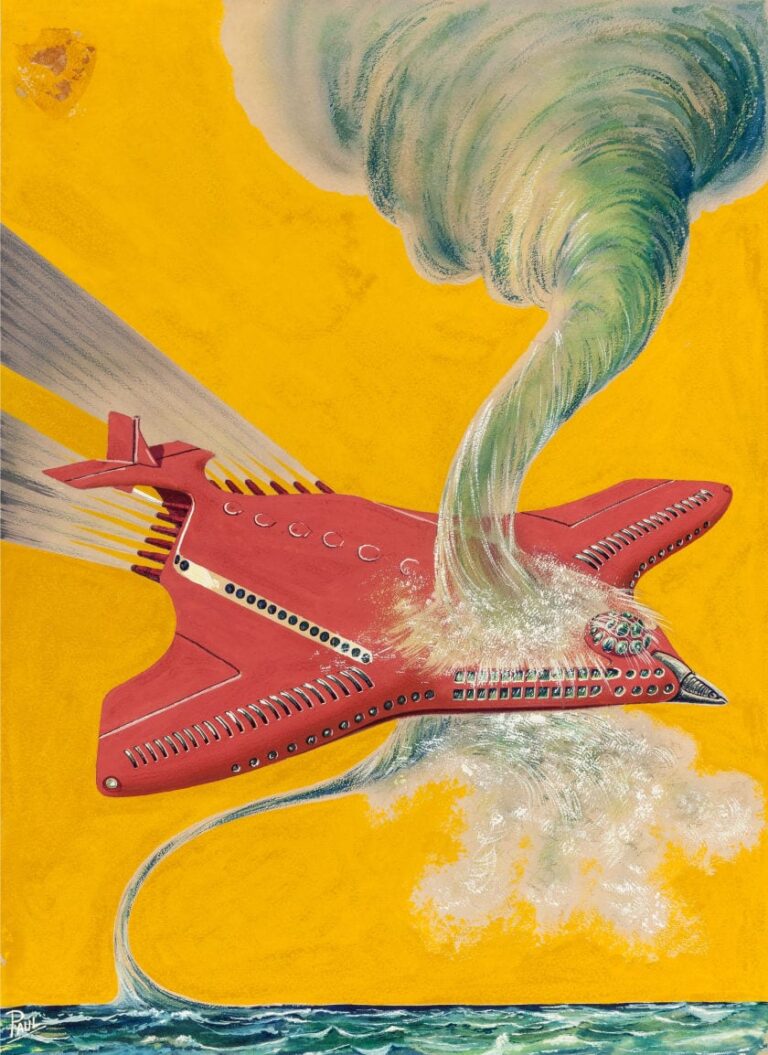 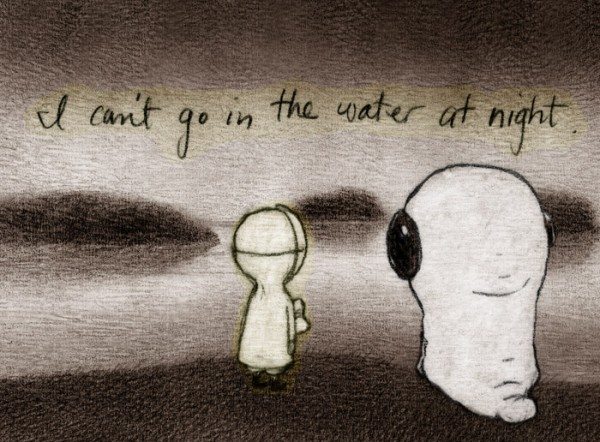 The Water at Night