Napoleon is one of history's most satirized figures, the central target during a golden age of caricature. Now, with cartoonists murdered over just such drawings, he reminds us that mockery's price was often high. Two hundred years have passed since Waterloo finished him off and two shows – one in Paris, one in London – are each taking a look at Napoleonic media. The British Museum's Bonaparte and the British mostly sticks to print. But the Musée Carnavalet's Napoléon et Paris shows how the emperor, while rebuilding Paris, remade his image.

For both France and England, this was a moment when cartooning mattered. The era's visual satire might serve to air one's politics, but people also knew it could effect genuine change. Caricature, which emerged during the 1750s, had rapidly morphed from a social curiosity into a sharp political tool. William Hogarth's bawdy, if moralizing, narrative series were among the first such images to be circulated. But it was far raunchier visuals – many produced from London – that helped bring down Louis XVI and Marie-Antoinette. Caricature went on to play a major role in the French Revolution, after which no one was in doubt about its potency.

The upstart Napoleon quickly drew the cartoonists' interest. At first, the British were simply impressed by his exploits then, eventually, worried about the threat he posed. But his reign saw incredible work from London's sharpest pens: Thomas Rowlandson, Richard Newton, George Cruikshank and the great James Gillray.

Bonaparte and the British has their finest efforts on show. But among all of them, it is James Gillray whose work retains an undeniable power. The son of a soldier who had lost one arm to the French, Gillray became the consummate editorial satirist. Many modern cartoonists, including the Guardian's Martin Rowson, cite his famous "The Plumb-pudding in danger" (1805) as "the greatest political cartoon ever drawn." 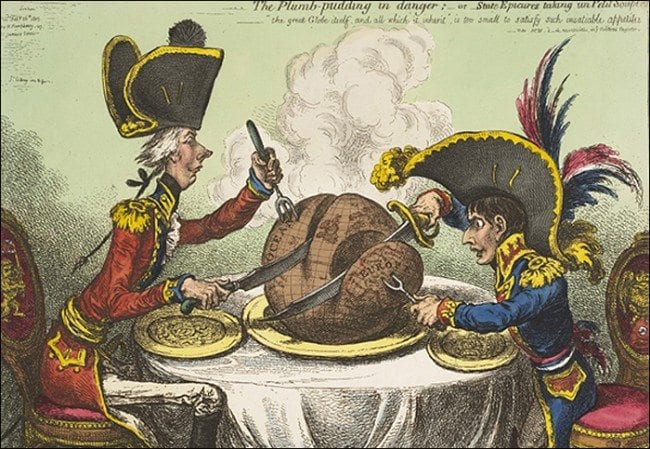 "The Plumb-pudding" is a key piece in the London show. As a deft snapshot of geopolitical greed, this hand-colored etching easily transcends two centuries. In it, Gillray depicted England's Prime Minister Pitt dining with Napoleon – with both of them carving up the globe as dessert. Pitt is drawn as lean and canny, hacking off both the Atlantic and Caribbean. A child-size Napoleon, with manners to match his height, cleaves off his portion (Europe) with a manic intensity.

Gillray's corrosive wit was matched by his command of line. During a thirty-year career, in addition to doings at home, he tackled the furies of the French Revolution – followed by Britain's long war against the French. (In 1793, Gillray also became the first accredited frontline artist. Yet he died, blind and insane, seventeen days before the battle of Waterloo). His work has an audacity few have ever matched, plus an exactitude that makes it journalistic.

There's a contemporary edge to the Gillray story since, in 1796, the artist was charged with blasphemy. His offending cartoon, complete with a Biblical title, showed the newborn heir of England's Prince of Wales cuddled in the arms of a famous female pimp. The country's leading politicians are kissing the baby's bottom.

Historians say that, as a way of meeting Gillray, a Tory MP called George Canning got the charges dropped. But the accusation itself was seen as unsurprising, since the caricaturist insisted on pushing all the limits. It was this same sheer nerve that made Gillray Napoleon's nemesis. During his final days in exile, the Emperor admitted as much. Gillray's expertise, he groused, had done him more harm "than all the armies in Europe."

The demon in all these drawings, however, took some time to evolve. For almost five years, no English satirist really knew what Napoleon looked like. (They had to make do by drawing Corsican stereotypes). Then, for fourteen months, the two nations were at peace. This truce spurred a boom in two-way tourism which, later, helped to enrich the shared comic vocabulary. When it ended in 1803, London-based satire exploded in an epic free-for-all.

Reduced to a belligerent gnome (and never acknowledged as an "Emperor"), Napoleon was hung, stabbed, caged, roasted, farted on, buried alive and impaled on everything from the horns of a Spanish bull to the Devil's toasting fork. The hook of his nose expanded weekly, while his thighs and calves bulged with 'frog-like' curves. His cartoon self was always greedy and intemperate, with a range of appetites that equaled his arrogance. One Gillray print shows him seated at a table lined with dishes shaped like London landmarks.

It was an era when British and French caricatures came from different worlds. Gallic satirists who had dodged the Royal censors soon discovered the Revolution had brought them little respite. During the short-lived period of the Directory (1794-1799), the riverside quais of Paris were flooded with satirical prints. But it took Napoleon only months to ban them all.

He was exceedingly aware of the dangers posed by satire. In addition to installing strict censorship, Napoleon went as far as lodging a "diplomatic protest" against London's caricatures. As his empire grew, however, he went further. In 1806, angered by the satirical pamphlet Germany in Her Deep Humiliation, he ordered the execution of its maker. Meanwhile back at home, as Napoléon et Paris notes, one of his key creations was the capital's Préfecture de Police. Founded partly to control media in the city, it published a daily bulletin measuring "public opinion."

The atmosphere in which London cartoonists worked was radically different. Despite many competing interests, their press was Europe's freest. As a result, they portrayed Napoleon as a mangy tiger, a duplicitous snake, a bantam rooster, a crocodile Pharoah, a sleazy Latin lover and, of course, a bellicose midget. Both artists and printers took an auteur's pride in such works – signing, dating and labeling every one.

Such London cartoons and series were printed for 'caricature shops,' from which they were either sold or rented out. The windows of these premises, constantly replenished, became famous for the boisterous crowds they drew. One French émigré described these in 1802: "…to be the first in Ackermann's shop to see Gillray's latest drawing is an enthusiasm I cannot describe. When the next caricature appears, it is truly a madness. People box their way through the crowd and you have to use your fists… every day, batches of these caricatures are shipped out of the country."

Whether they contained a single or a multi-frame work, all such prints were sold to be displayed in homes. There, they would be hung on the walls, pasted onto screens or proudly added to an album. (Some shops even assembled their own albums of caricatures and hired them out by the evening). The whole experience of satire was extremely social.

Some images – such as that of the devil holding a baby Bonaparte – found their way across the entire continent. Says the British Museum's co-curator Sheila O'Connell, "We know of at least twenty versions of that image alone." Many English caricatures were also smuggled into France.

Napoleon fought back with satires of his own. During 1805, he famously ordered his chief of police to "have more caricatures made: an Englishman, purse in hand, begging different powers to receive his money, etc…" He also commissioned careful and targeted parodies of his enemies. One arm of this approach, featured in the Paris show, was to deluge the streets with prints mocking English tourists. Usually such visitors are shown as slow or intimidated, although happy to gorge themselves on Gallic cuisine.

French artists did manage to caricature Napoleon. But, in addition to maintaining anonymity, their works are distinguished by a certain restraint. As Catherine Clerc writes in La caricature contre Napoléon, their attacks were limited to the Emperor's image and reputation ("Never did the caricaturists deform his actual body"). American art historian Elizabeth Childs concurs. "The politics in 18th century English caricature are exact. But French prints of the era are more emotional than factual…their style is more classical and their humour more elite". The French cartoons' captions and speech bubbles are neatly penned, with numerous allusions to classical myths, to literature and to well-known paintings.

The British work is a total contrast – rude, brash and vulgar. But, here again, Gillray's prints are an exception. Uniquely erudite, his works make frequent allusions: to other caricatures, to portraits, to history painting, to great writing. Across the Channel, their enduring artistry got great reviews. So did the show's demolition of "stubborn myths".

The main one of these concerns Napoleon's stature. Ever since 1803, when Gillray created his "Little Boney", Napoleon has been pint-sized in the popular imagination. Yet this image was imposed by the works on show and can be traced directly back to Gillray. As each show has made a special point of stressing, in reality Napoleon wasn't so short. He measured around "five foot six" or "perfectly average for his time."

Nor is it true that all Britons detested him. Napoleon's range of Anglo admirers included William Hazlitt, the poet Lord Byron and founder of the famous wax museum Marie Tussaud. Many works in Bonaparte and the British once belonged to such fans – not just prints but unusual relics. Some of those on show are souvenirs picked up on battlefields, as well as elaborate jewels that showcase Napoleonic follicles.

Such English worshippers would enjoy seeing Napoléon et Paris. Viewed at home in the city he so transformed, Napoleon is less despot and more municipal superman. As in his own propaganda, he is benignly paternal: busy building Parisian bridges, cleaning up noxious cemeteries and turning the Louvre from a palace into a temple of art.

They made Napoleon into their era's Doctor Octopus. This obviates the need for real historical detail and you won't need politics to relish all the drawings. But, somehow, this art does convey Napoleon's baffling complexity. Behind all the extremity of its joke figures, you sense the enduring riddle: that fervent Revolutionary turned opportunist, the ultimate commander who left behind dying troops and the awkward immigrant who ended up governing France.

These are certainly works that inspired generations of artists. But, in addition to remaining fresh and funny, they make a timely case for both the savagery and the inherent risks of satire. 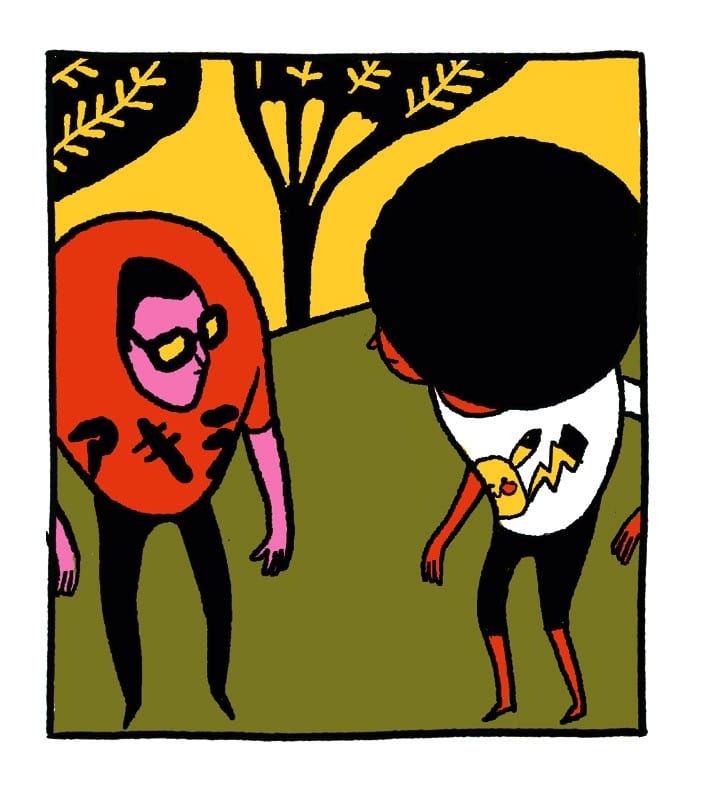