Today on the site, TCJ legend Joe McCulloch returns with an interview with one of the greatest living cartoonists, Jim Woodring. As usual with Woodring, things get into deep water pretty quickly.

Virtually every other thing I've done besides Frank has been consciously constructed, but with Frank, it was a matter of listening to this silent voice and writing down the scenarios it fed me. I mean, I know the Unifactor is a part of me, but it really seems to me to be a separate entity that provides concepts, characters and events which I write down as they come. The important ideas, the ones essential to the story, have a kind of charge to them-- I usually say they "fluoresce” as a simile, because they seem to me to be lit by an invisible source. I would compile these glowing ideas as they came and when that was done I had a bare-bones storyline that I just needed to flesh out and draw, the meaning of which was as mysterious to me as it was to anyone else. It was the easiest work I ever did.

After I had gotten a few pages into Poochytown, I had a really terrible idea which I mistook for a really great one, which is that Frank ought to have a life partner, a mate. The Poochytown story had come so easily that I was a little suspicious of it. It all just came in two or three sittings without any major structural editing required. I was looking at the prospect of drawing 100 pages of a comic which looked kind of weak and tedious to me, and I just persuaded myself that I should drop the original storyline and have Frank find true love.

And so I broke with precedent and started writing that story, and the Unifactor stopped cooperating with me. It took me almost a year to hammer out even a workable story, and I should have grabbed the old clue train and gone back to the original story; but I stubbornly forged ahead. When I had that finally worked out and was preparing to draw it, the Unifactor came back into my life and made some heavy modifications to the storyline, all of which I liked better than what I had come up with.

Shea Hennum is here, too, with a review of Flocks by L. Nichols.

A memoir, Flocks emphasizes Nichols’ relationships with various flocks—communities of people that share some moral scheme and attempt to impose it on even the most reluctant of members. These include the religious communities of his youth, the secular communities of his college years, and the queer communities that he moves in and out of throughout his life. Nichols is a trans man assigned female at birth—a fact that motivates a lot of the tension in his life. At first, he is confused about his sexuality, attracted, as he is, to both men and women. He isn’t sure what to make of these desires—where they come from or what to do about them. For a time, he believes himself to be a lesbian, which causes some internal friction when his desire and the moral beliefs he has been inculcated into are at odds. This friction is exacerbated by his fellow congregates’ stances on homosexuality, and ultimately his religious community ends up causing him a great deal of turmoil. This turmoil is quelled somewhat by the community he finds at M.I.T., but those communities come with baggage of their own, moral prescriptions of their own. Nichols seeks some resolution in these seemingly-open secular communities, but they cannot give him the answers he longs for. This results in an inward turn, a search for the problematic kernel within himself that he can excise and feel better. This takes the form of periods of deep depression, of self-medication and self-harm. By the book’s end, however, Nichols has come to understand himself better and his conclusion to this story gestures towards a happier, more fruitful future.

—News. This weekend's SPX brought with it the announcement of this year's Ignatz Award winners. Richie Pope, Eleanor Davis, and Sophia Foster-Dimino took three of the top prizes.

The first trial date for Pepe the Frog creator Matt Furie's lawsuit against Infowars and Free Speech Systems has been set for next July.

Furie has said he sued because he’s “dismayed by Pepe’s association with white supremacy, anti-Semitism, and the alt-right,” including unauthorized use of the image by President Donald Trump and his supporters, including Alex Jones.

The Los Angeles of my youth was a confluence of post-war triumphalism, a tech boom, the ascendency of youth culture, television, transistor radios, beatniks, surfers, hotrodders, air travel in jets, MAD, Muhammad Ali, The Beatles, going to the moon, optimism and exuberance. Gas was cheap, like 17 cents a gallon; for a dollar you and your pals could hop into the old Dodge and drive to the beach, the mountains, the desert, Hollywood. So there was this tremendous atmosphere of freedom, and plenty, and the clear understanding that you were living in a golden age of music, humor and culture in general. I grew up seeing the world through that lens.

Of course it was also a horrible time in many ways. The Cold War paranoia thing was really awful…it bent me for life. I grew up in Burbank and Glendale. Both were lily-white at the time, especially Glendale, which at one point had a sundown law. If I saw a Black person on the streets of Glendale I knew they worked for someone there or were just passing through. Institutionalized racism was a relentless sour note that contaminated everything.

Exactly. I couldn’t just make a copy cause I had written back to back and the ink showed through from the front to the back, so I just wrote it over. It was great because I started thinking about the concert. I read it over and over I was playing all kinds of Beatles songs. I was a nutcase. I was in my 13-year-old mind, and I just banged that out. It was so much fun. [laughs]

You did those pages on notebook paper, but the rest of the book is on your dad’s old stationary.

From their old plumbing business. [laughs] My mom was not going to allow us to buy new stuff. Ever. We had to reuse and reuse.

Adrian Tomine drew the latest New Yorker cover, and talked briefly to Françoise Mouly about it.

Sometimes a cover image will just appear in my mind, fully formed. In other cases, I’ll have the vaguest semblance of an idea but no sense of how to turn it into a cover. Those movie-set trailers are a good example of this. I’d drawn them in my sketchbook a long time ago, and I knew they were an ubiquitous, specific part of New York life, but I didn't have a story beyond that. Then, a few years ago, I decided to try my hand at screenwriting, and in a particular moment of frustration and despair this image popped into my mind. The apron on the back of the chair was a spur-of-the-moment addition while I was sketching, and I think that was the last piece I was looking for.

The latest guest on the Comics Alternative podcast is Summer Pierre. 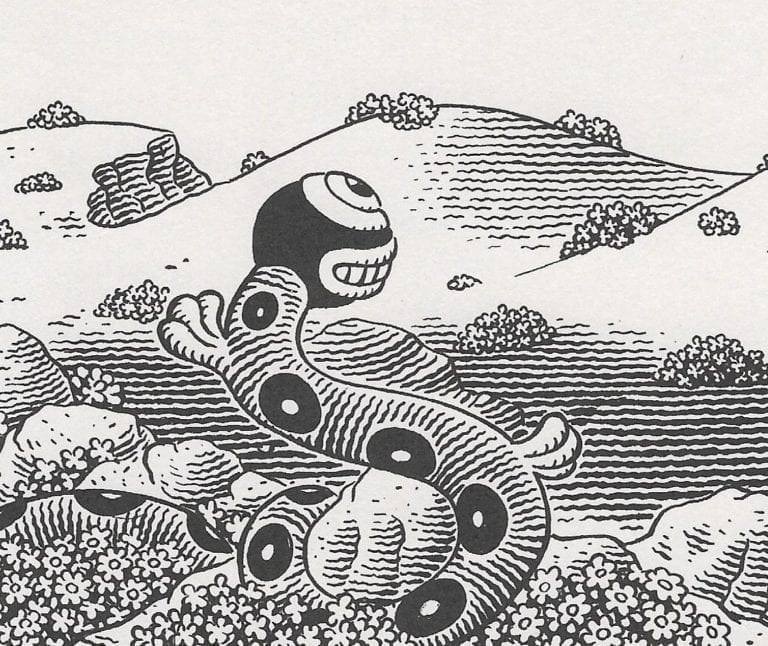 “Lit By an Invisible Source”: Briefly, with Jim Woodring 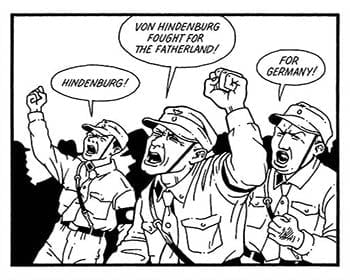