The entire book is drawn in colored pencil. This adds a vibrancy and immediacy to the comic that makes it look like it was ripped right out of Katin's sketchbook. It also allows her to shift from naturalism to a cartoonier style with little effort. Katin's own self-caricature is one of the best I've ever seen from an autobiographical cartoonist. The scribbly lines of her hair, the slightly pointy nose, the tiny but wriggly eyebrows that express so much emotion and the way her posture alternates between slumped shoulders and excitedly active tell the story of a woman who is so often bursting with energy. In real life, Katin is poised, stylish, and charismatic, so it is funny to see her depict herself as slightly disheveled and neurotic in the pages of her book.

And Lucy Knisley is on day four of her Cartoonist's Diary.

—Speaking of Katin, she drew a fun short comic about the NYC launch of her new book tour.

—Another sad comics death this week, with the passing of European cartoonist Fred.

—In a smart get, Tom Spurgeon interviews the Society of Illustrators' Anelle Miller about this year's MoCCA festival. It will be interesting to see how things go there this weekend. People seem enthusiastic about the show in a way I haven't noticed in years.

—The CBLDF has posted a story and short documentary about Ryan Matheson, the young man arrested while crossing the border into Canada a few years ago, because of various manga images customs found on his laptop:

—It's been too long since we had a good debate about how much work Stan Lee did versus how much Jack Kirby and the other Marvel artists did, so I'm sad Stephen Bissette posted this old "Bullpen Bulletin" that I'm sure will put the matter to rest forever...

—Sean Kleefeld finds the missing link in the Prince Valiant/Jack Kirby Demon story... And an unexplained something that had been nagging at my subconscious for years is suddenly free and clear. 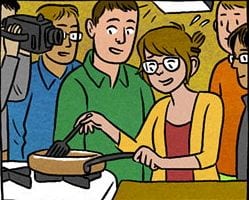 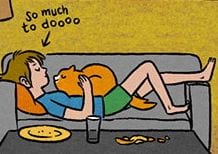