Mister Wonderful’s giant images also do something, and you can correct me if I’m wrong here, that I don’t think I’ve ever seen from you before: They reveal your process. When you look at it at that size, you can see the line fray and feather, because you’re seeing it at such a large scale.

I actually did that intentionally. The reduction is really about the same as the other pages, but I wanted it to look a little rough, like it was blown up, like you’re all of a sudden seeing the image enlarged. I drew with thicker lines, and I used a slightly sloppier line than I normally do, or a rougher line, and I used a thicker pen for the lettering so it was magnified a little bit. It seemed, somehow, to work better that way than to have it all be the exact same gauge.

It was really convincing. Until I went back and compared the book to the original page by page, I just assumed that those were panels from the original that had been blown up to that size, and then you went in and filled in the space somehow on the subsequent pages.

That was what I was going for. Although, it was really the most complicated book I’ve ever done in terms of proportions, just trying to get everything exactly right. I had to redo so many pages that I measured incorrectly. [Laughs] It was really a nightmare.

That’s funny to hear you say, since you’ve reformatted your work substantially a few times now. This book comes out between similar things you’ve done with Ice Haven and The Death-Ray, both of which originally appeared as individual Eightball issues. What was uniquely challenging about this project as opposed to similar ones you’ve done?

Ice Haven and The Death-Ray were done as comics. With Ice Haven, I thought it helped it to make it a more intimate book, a smaller book, since it was such an intimate, self-contained world. So I always had the notion of doing it as a little book. That was what was behind the format of that. The few changes I made, and the few things I added, were to fill out the world, little ideas I’d had after it was printed. But Mister Wonderful was not done to be read all in one sitting originally, so as I said, it had a lot of tweaking to do to make it work for that format. The Death-Ray, which is coming out in book form towards the end of the year, that’s much more as it was originally printed. I sat down with it and tried to think of what I’d want to do with it, and I really felt like I got it right. It’s got a lot of little things added to it, but it’s pretty much an archival presentation of the story.

It was responded to by an entirely different audience. Mostly non-comic readers, at least the response that I saw. It did fairly well. But it was a very different thing than the comics world’s response to it. I was always baffled that people who liked mainstream comics seemed to really gravitate towards that one. I couldn’t quite figure out what it was about that one, specifically, that made them like that so much.

This is going to sound enormously condescending, but perhaps it was because it was self-contained, it felt like a graphic novel, but it wasn’t as big an investment of time and resources, so you could get it all in one sitting and walk away feeling like you had gotten something out of it.

They were voting with their pocketbooks. [Laughter] Sounds about right.

And also, as opposed to The Death-Ray, there wasn’t that element of genre critique. Eightball 22 had very little to say about superheroes, so people who normally read superheroes could read it and leave feeling fairly comfortable with themselves.

That’s certainly true. Though that usually means they’d ignore it entirely, so… [Laughs]

You’re right, that doesn’t explain anything. You mentioned earlier that once you’ve read Wilson, Marshall seems like a pussycat, and that’s true.

Right. He seems like someone you could imagine hanging out with, whereas Wilson might be a little intimidating to most.

Exactly. But the first time I read Mister Wonderful, on the New York Times site, I thought at first, “Oh, this is a jerk, like Andy from The Death-Ray, although he’s not murdering people with a laser gun.” But Marshall reached his low point and his high point within one page of one another.

Nathalie is about to start telling Marshall about the story of her and her ex, and he’s mentally psyching himself into being an attentive listener, and literally just as she’s beginning the story, his narrative caption box gets superimposed over her word balloon and says, “So here’s the basic gist.” [Laughter] That made me laugh really hard, like, “Oh Jesus, this asshole! You’ve gotta be kidding me!” He’s just in his own little world. But the next page is the story of her relationship, where Nathalie’s ex laughs off her concern that he was ashamed of her. His laughter is represented by this big block-letter “HA HA,” which becomes a literal physical presence in the room, eventually dominating their entire life together. It was a beautiful, unusual device—but then I realized, this isn’t Nathalie telling Marshall her story, this is Marshall telling us Nathalie’s story, so this image is coming from him. 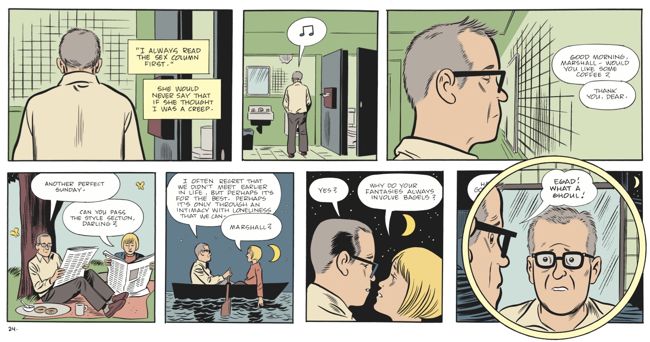 It turns out he’s not completely self-absorbed, and his view of her isn’t just an ideal—he is capable of empathy and thoughtfulness. To me, that was the lynchpin of the whole book. And it was so unlike any of the other fantasy sequences in the book, which were cartoony and funny; this was nuanced and melancholy and sweet and thoughtful, a whole different side of Marshall.

Yeah. I hope you can see that he’s a more well-rounded character than you would experience by being inside his brain in a high-pressure situation like that. That would be him at his most Marshallesque [laughs], during that story. I found him a likable character. I always find all my characters likable; I found Wilson likable too, so I’m the last guy to talk about that. But I felt that that was an honest depiction of how a guy like Marshall would be during an experience like that, where he’s just unable to function as a fully rounded human being, and his brain is going through all these different mechanisms to try to cope with this overwhelming experience. I have sympathy with him, more than anything.

At the end of the book, when he’s outside that high-pressure involvement, he’s so much less high-strung. That in and of itself is almost a happy ending, I feel.

Yeah, he’s comfortable all of a sudden, and he’s ready to just go with this. One of the early ideas…when I came up with that idea for a romance comic, I dug up one of those books, The Photo-Journal Guide to Comic Books, those twin volumes by [Ernst] Gerber that had every single comic book cover up to 1964. I started looking at every single romance comic I could find to get ideas: “What is a romance comic?” I noticed that every single one of them had something about, “First date!” “First love!” “First kiss!” These were for 12-, 13-year-old girls who were just about to have all of those things. I thought, “It’s all about firsts, so this guy, this is his last date.” That was the genesis for the way the strip was structured: This is a guy where if this date doesn’t work out, that’s it. He’s giving up, or sticking his head in the oven, or whatever. He can barely stand to do this one date. He’s just scraped together enough courage and enthusiasm to get out there and try it one last time. That’s a huge amount of pressure.

The second date is a triumph, then, regardless of where it went afterwards.

With the Clockwork Orange ending of The Death-Ray and the Godfather Part II ending of Wilson in mind, just to walk away with these two nice people being nice to each other on a park bench eating breakfast made me go “Awwww!”

[Laughs] That’s good. I had no idea how that story was going to end. I knew it would end with that final meeting, I knew right up to that moment what was gonna happen, but my inclination always is to find the grimmest possible moment and find some humor in that. By the time I got there, I really liked Marshall, and I thought, “I’m gonna give him a chance. I’m gonna see if I can find a way for him to salvage this.” It was me finding a way to not be mean to the guy. [Laughs]

Finally, are we to take anything away from how the new “Tim and Yuki” strip—about the mutual friends who set Marshall and Nathalie up—is now the literal centerpiece of the book, or is it just a funny sex joke?

I thought it needed to be in the middle. It throws the weight of the book off if it’s on either side, somehow. I wanted it to be the fulcrum that the whole book rests on. To cut away from the story and go to these other characters is a risky venture. I somehow thought that if I planted it right in the middle there at this break moment, it would just exist and not throw everything off.

Its mere existence is a pretty great gag.

I’m sure someday I’ll meet somebody who didn’t really read the book, and just opened it, and they’ll say, “Oh, I loved that character Tim.” 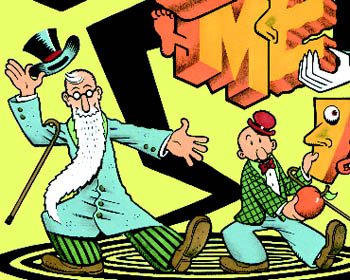 Guest Blog: Eric Reynolds on the End of Mome 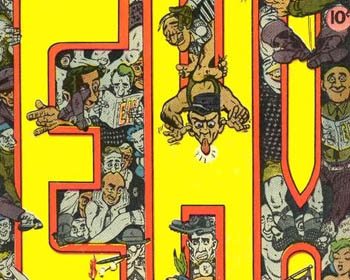