Another installment of Ryan Holmberg's perpetually rewarding column, What Was Alternative Manga?, is here, and this time around Ryan is writing about manga in India, by way of Bharath Murthy's Comix India:

What hooked the manga scholar in me was Bharath’s “A form of writing: an essay on the comic,” a McCloudian intro to the medium and his own interests, published in Comix India no. 1. There’s a hefty segment on manga, and it wasn’t the usual. He had apparently been to Tokyo and met a few artists. I was curious. I arranged to meet him. He was giving a talk about manga in Delhi and asked me to piggyback with a lecture of my own. I interviewed him too, stupidly without a sound recorder. Now I am back in India, living in Mumbai – for “personal reasons” that do not include gurus or NGOs. I had to redo the interview.

Bharath presently lives in Pune, where he teaches at the venerable Film and Television Institute of India. On a recent weekend, I yanked myself away from writing and translation work, put myself on a train southbound, and holed up in Bharath’s pad until 2 AM with a litre of one of India’s finer scotches.

Oh, and I'm really excited about this week's Cartoon Diarist, Joe Ollmann. Today he introduces himself and makes a few promises.

—The Harvey Award nominations are open.

—Criticism Department. Derik Badman comments on every comic he's read in April, and includes information on what the mysterious Blaise Larmee has been up to for those who've been wondering. Domingos Isabelinho writes about Geneviève Castrée's Pamplemoussi. Bill Morris writes about the new Herblock documentary. Glen Weldon writes about Superman's dog Krypto.

—Not Comics: A recent flap sparked by a Publishers Weekly interview with Claire Messud (see two perspectives here and here) has provoked a lot of discussion about the necessity (or not) of likeable characters in fiction. This can't help but remind me of the critical response to Daniel Clowes's Wilson a few years ago, and Clowes's claim: "Likeable characters are for weak-minded narcissists." 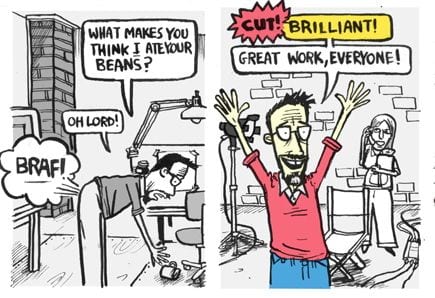 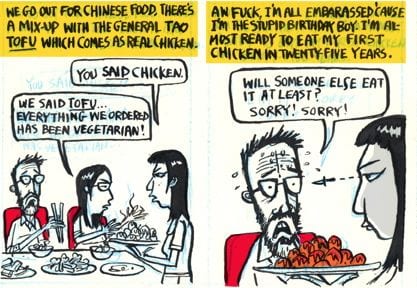