It was a question I never expected Maurice to ask, and a question I had little idea how to answer. Back in 1959, well before his books had become cultural icons, Maurice asked, “How do I break into advertising?”

He was asking the right person, or so he thought. Maurice must have seen some of the advertising I had done—ads for Alcoa,  Time Magazine, CBS,  IBM,  Alcoa,  and a full page cartoon strip for D’Orsay Perfume in The New Yorker .

I doubt that he ever visited a single agency. I doubt if he even assembled a portfolio . But I enjoyed seeing him again, and happy that it was on my  turf.

His turf could not have been more different  than what passed for style in 1950s New York. Back then, walls were stripped down to the raw brick, lamps were Noguchi parchment globes, candles were stuck in  wax-encrusted wine bottles, and  occasionally, for somebody in the graphics business, there was a floor-to-ceiling cork wall. That was how we escapees-from-home lived in the '50s. But not Maurice. He lived in a 19th Century  duplex on West Ninth Street. Dark and redolent with age, the décor was Jamesian—appropriately. His polished mahogany bookcases were lined with volume after volume of  first edition Henry James. His collection was second only to that of Leon Edel, the  eminent James biographer.

I had read some Henry James in the past, but only his short stories: The Aspern Papers, The Beast in the Jungle (that terrifying tale of procrastination and missed opportunity), and  The Turn of the Screw,  but never any of his novels. “Maurice,” I asked, “could you recommend a novel of James? What’s your favorite?” He hesitated, but only for a moment. The Wings of the Dove.  And that began my first reading of James’ novels—although the convoluted syntax of Henry James made me reread the first few pages several times before I could move on to finish the book (I am not a patient reader).

My relationship  to Maurice was. . . well, how can I put it? Distant but close. We thought of ourselves as friends, but we saw one another rarely, probably because we were two workaholics more committed to our work than to our social lives. Maurice put it this way when he wrote an introduction to my 1980 book Behind the Lines:

Bob and I are typical colleagues/friends—we hardly ever see each other. This is more my fault. His exquisite wife, Moisha, has often asked me to visit. I’ve never even seen the Blechman children. This doesn’t, I hope, make me less a Blechman friend. It only points up that infernal, insistence on work that imperiously contradicts one’s normal, gregarious inclinations. The Blechmans understand this. My best friends in the profession  are people I rarely see but whose natures and work I love.  I have no recollection of how Bob and I met—when or where—or the number of times we’ve seen one another. We are, nonetheless, solid friends, and that feels good.

Neither do I remember how we first met—where or when.  But I recall that we met again in 1966.  The occasion was a joint exhibition at The School of Visual Arts with Edward Sorel,  David Levine, Jules Feiffer, Robert Grossman, and several other illustrators. Maurice admired a drawing of mine—something on the  Vietnam War which I had done for The Village Voice. He asked if we could swap drawings. “Sure.” Why not? After the exhibit’s closing,  taking it down from the wall, four-thumbed -me dropped it on the  floor, crinkling the edges, effectively ending the swap. To this day I brood about that mishap.

We met again in 1977. I was asked by  PBS to create an hour special for the Christmas holidays.  I remembered having received a Christmas card from Maurice which he had done for the Rosenbach Foundation. It consisted of six panels, and portrayed a waif who magically turns himself into a Christmas  tree --  a gift to other children (an apt metaphor for the sacrifice an artist makes for others).  I thought his card would make a lovely animated opening for the program, so with Sendak’s blessing my studio set to work on the project. And work it was! It took four months to produce the one minute segment—four months of laborious  hand-watercoloring to imitate the original card. I later asked Maurice, as well as the animator, to sign some of the watercolors. He signed them, and why not? Although they were only based on his work, the watercolors were beautiful.

I originally thought of calling the program “What Happened to the Child?’” which would have been appropriate to Maurice’s piece and to so many of the other  program segments. But it seemed to be too overtly religious, so I changed the title to “Simple Gifts”—a rather anodyne title, I now think.

Over the years our relationship was more epistolary than actual.  But in the late '80s—probably around 1986-- I received a telephone call from Maurice  “Bob, I was asked by Glyndbourne to do the sets for their upcoming production of Ravel’s  L’Enfant et les Sortileges.  Would you be interested in doing animation  as backlit projections for the sets?   Would I?! After doing commercials ad infinitum and ad nauseum for clients , some of whose products I would never want to use, I welcomed the opportunity to do work of a  purely artistic nature. The director was Frank Corsaro, renowned as the librettist and director of both The New York City Opera and the Metropolitan Opera. The opportunity to work with Maurice and Frank Corsaro was thrilling.

I went to Maurice’s home in Ridgefield, Connecticut, a rambling 18th century structure housing a bewildering display of art objects: drawings by some of his favorite illustrators such as Beatrix Potter and Jean de Brunhoff, German lead soldiers, stuffed Wild Things, Mickey Mouse figurines, and—to my eyes, something to genuflect before—an original Maxfield Parrish. We discussed the project, swapped  a few ideas back and forth, and met again the following week to clarify our thoughts..

There was no other animator I wanted to work with than the late Tissa David, a brilliant artist with a superb story-telling sense, and the ability to read music scores.  Who better to collaborate with? And here I wish to correct a popular misconception. Although I am often referred to as an animator, I am, rather, an animated filmmaker. I do not create the actual animation. People like Tissa David did, and often with an ability to enhance and expand upon the drawings and story lines they were given. She—like the best animators-- did not merely “move” drawings.

It turned out that Tissa was reluctant to work on the project. “But why, Tissa?”

“Because I  would want to see how the animation would relate to the sets—I would have to be in England to understand the setup—I would have to . . .” and so the litany of reasons went on and on and on. It was clear that under no conditions would she accept the job.

I would entrust the work with no other animator. Besides, the pay was low, and it would have been something done for the love of the project. Something Maurice could afford, but not me.   At that point in his career his books probably outsold the Bible.  But I had a studio to support. . . weekly payrolls to meet. . . I wasn’t sure that I could afford  to take on the project.

“Maurice,” I called him the next day,” I can’t take on the project, much as I would love to. Really.”

Maurice was upset.  And no wonder. He was counting on my participation. But without Tissa’s animation, I could not—or rather would not—accept the undertaking.

End of chapter. The book was closed. Or so I thought.

A  year later,  my wife and I were having dinner at a restaurant opposite Lincoln Center, when Maurice walked in with a small group.

Maurice spotted me, his eyes widened, and he walked to our table.

“Bob, I’m so glad to see you. I didn’t think you would attend the premiere.”

“Of course,” I stammered.

We exchanged small talk, and Maurice left with his small group for their table.

“Quick.,” I said to my wife. “ Forget the dinner. We have to get tickets. Thank God the Met is just across the street.”

At least the seats were good—near the front center.  Sitting back in our plush red seats, the ceiling lights grew dimmer, and up went the curtain, revealing . . .

“Hey, Moisha,” I turned to my wife in a loud whisper, “What ARE those sets?”

“They look Russian ,” she replied.

And  so they were. We had bought tickets for Boris Goudonov.

Leaving the theatre (after the first act. Who would want to stay longer?), we passed The New York City Opera where posters announced their production of Ravel’s  L’Enfant et les Sortileges, with sets by Maurice Sendak.

Maurice and I met several years later. I can’t remember the occasion except that it was at my studio,  a wood paneled penthouse on West 47th Street that once housed the architectural offices of the early 20th Century architect Bertram Goodhue. Maurice  showed  me a watercolor he had done, and wanted my opinion. “My opinion? Maurice, it’s fabulous.” He hugged me.

In June of this year,  I drove into Manhattan from my country home, two hours north of the city.  Maurice had died the previous month.  Friends and colleagues were gathering to bid him a final goodbye.  The venue was The Metropolitan Museum of Art, and the auditorium was packed. 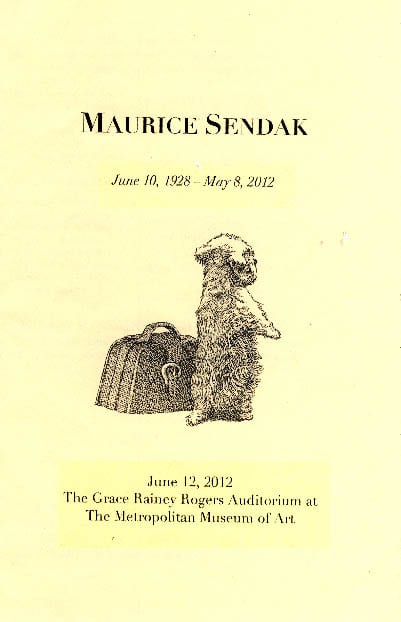 Excerpts from film interviews were screened, and speakers talked of the enormous role Maurice had played in their lives

A favorite poem of his was read,  John  Keats’ “Welcome Joy, and Welcome Sorrow,” two emotions the poet and the artist must have deeply and intimately shared. It put me in mind of the Christmas film I had produced based on Maurice’s Christmas card. After it was screened for him, he turned to the composer and said, “Your music is perfect. It is so Schubertian.”

So Schubertian!  How Maurice that was. And how unlike our culture’s general take on classical music where Schubert and Schumann, Mendelsohn and Mozart, blend into a musical stew where flavors are barely distinguishable.

But Maurice’s comment should not have surprised me.  Maurice Sendak was a supreme autodidact, a classic polymath, a person for whom artist, critic, music lover, scenarist, author, and bibliophile were bundled into one splendid, unforgettable and unique package. 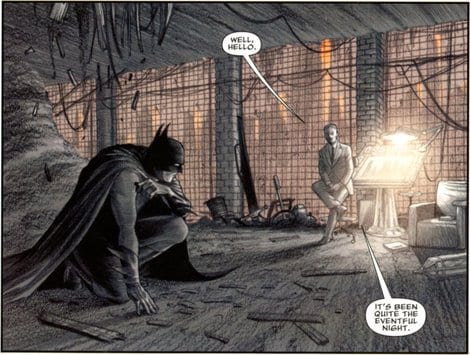 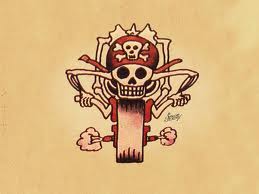