With Marie Severin’s death after a stroke last evening, we have lost one of the last of a dwindling number of links to the revered and influential EC era. Her considerable talents as a colorist and a cartoonist have been overshadowed by her legendary male colleagues, but it’s clear from all accounts that she was an important ingredient in the jovial, close-knit creative atmosphere of the EC offices. Her in-house caricatures, cartoons, Christmas cards, envelope and postcard illustrations, sketches and doodles have given us our most intimate glimpse into the creative habits and personalities of the artists, editors and writers who crossed paths at 225 Lafayette St. in Manhattan. That she never quite ascended to the remembered pantheon of EC artists is one more instance of the comics industry’s sturdy glass ceiling for women creators.

Severin was born Aug. 21, 1929 into an East Rockaway, N.Y., household where artistic sensibilities were prominent. She described the home as filled with storybooks illustrated by artists like Howard Pyle and N.C. Wyeth. Both parents designed clothes, and her older brother, John, attended the High School of Music and Art before joining Harvey Kurtzman and Will Elder’s studio and finding early professional work with Prize Comics, DC Comics, Marvel/Timely and EC. Her father, a veteran of World War I, drew illustrations for newspapers, painted in his spare time and became a designer for the Elizabeth Arden fashion house. “My father had a wonderful color sense and so did my mom,” Severin told interviewer Steve Ringgenberg (The Comics Journal Library Volume 10). “Growing up, you didn’t realize you’re being trained at home.”

Her mother was an Irish Catholic, and Severin attended a Catholic elementary school and an all-girl high school. It was a big transition, therefore, when Kurtzman, seeking to upgrade the coloring on his comics, took John Severin’s advice and hired her into the all-boys club of the EC offices in 1949. Among the “boys” were Elder, Wallace Wood, Jack Davis, Graham (Ghastly) Ingels, Bernard Krigstein, Al Williamson, Jack Kamen, Frank Frazetta, George Evans, and her brother. Her first coloring job for EC was on A Moon, A Girl, Romance #9, a title that became Weird Fantasy the following year, as EC began to concentrate on the popular horror and science-fiction genres. Other than a brief taste of art school and some clerical work on Wall Street, Severin, essentially, went from the company of nuns to a workplace that turned out images so skillfully horrific that they shocked a Senate subcommittee and parents throughout the country.

When confronted with a particularly lurid panel, she was sometimes known to respond by coloring it entirely in blue, and EC writer/editor Al Feldstein described her as “the conscience of EC.” Severin herself, however, rejected this image of an innocent Catholic girl offended by EC’s ghoulish male artists. “Listen,” she told Ringgenberg, “when it comes to horror, I can do horror better than most anybody. … But it was more like I didn’t want us to get into trouble.” When she toned things down in the coloring stage, she said it was “mostly out of pure sheer terror that we would be arrested and sent up to Kefauver to have our fingers smashed or something.”

Sen. Estes Kefauver was chair of the Senate Subcommittee on Juvenile Delinquency, which interrogated EC publisher William M. Gaines in 1954 about the gruesome content of EC comics. Severin’s fears turned out to be well founded since the subcommittee hearings and public backlash against comics led to the formation of the Comics Code Authority, a self-censoring arm of the industry, which, in turn, resulted in the disintegration of the EC horror line.

From 1949 to 1955, Severin was an integral part of EC’s output, coloring virtually all of its titles. But in the wake of the Comics Code, EC gradually discontinued its color comics, focusing on Mad, which changed to a black-and-white magazine format not subject to the Code’s approval. With nothing to do at EC, she followed her brother to Marvel, then called Atlas Comics, in 1956. For the next couple of years, she colored a wide range of Atlas titles, including Journey into Unknown Worlds, Astonishing, Melvin the Monster (not the John Stanley series of that name, but Marvel’s Dennis the Menace knock-off), World of Mystery, Mystery Tales, Tales of Justice, Cartoon Kids, Marines in Battle, Wyatt Earp, Journey into Mystery and others.

In 1957, forced to reduce its output and distribute its comics through competing publisher National Periodicals/DC, Atlas fired virtually all its artists and began filling issues with unused inventory stories. Severin left the sinking comics field, finding work doing promotional art and comics for the Federal Reserve Bank and later with a film-strip production company. She was turned away by Harvey Comics, but welcomed back at Marvel in 1964, which, by then, was on the rise, having launched Spider-Man, Fantastic Four and other superhero series. The company provided her with continuous work over the next couple of decades.

At Marvel, Severin performed various production tasks: color, inking, touch-ups, finishes, promotional art, and letters-page illustrations. Sometimes, according to the Grand Comics Database, her work was credited to “The Whole Bullpen.” She resumed her old EC habit of drawing caricatures and cartoons depicting personalities who made up the bullpen. Marvel, however, soon recognized what EC had apparently failed to notice: that this production staffer was a first-rate cartoonist. She was assigned to draw illustrations that ran alongside Jack Kirby art in a 1966 Esquire article about the influence of Marvel on college campuses and her work on that caught the attention of Marvel editor Stan Lee. When artist Bill Everett abruptly left the Doctor Strange series in 1967, Severin stepped in to both pencil and ink the series with Strange Tales #153. Within a few months, Severin was drawing the Doctor Strange half of every issue of Strange Tales and the Hulk half of every issue of Tales to Astonish. Later that same year, Marvel launched a parody comic called Not Brand Echh that was patterned after the early Mad comics and featured at least one story drawn by Severin in every issue. She had never been invited to contribute to EC’s Mad comics in any capacity other than colorist, but on Not Brand Echh, she immediately demonstrated a mastery of the Will Elder style of manic, densely packed cartooning.

Severin’s 1967 run on Doctor Strange continued until Strange Tales #160. She drew Incredible Hulk in Tales to Astonish from issue #92 to #101, including the crossover issue with the Submariner series, and went on to draw the Hulk in his own 1968 solo title, issues #102-105, as well as the 1968 Incredible Hulk annual #1. She was a mainstay artist for the entire 13-issue run of Not Brand Echh.

But these runs were exceptions. Severin was given no signature series and had no opportunity to create a series from scratch. Instead, throughout her career at Marvel and elsewhere, her talent, speed and energy were used to save her employers’ bacon. She was a go-to emergency responder whenever a regular artist unexpectedly left a job or missed a deadline. Whenever spot illustrations were needed for letters pages, fan-club materials or ads, Severin was brought in to do the job in a manner that was both quick and faithful to the house style established by Marvel’s more celebrated artists. She was a frequent inker and was Marvel’s head colorist until 1972, but most of her work was uncredited: roughing covers, fixing faces, redrawing panels, adding bridging sequences and making corrections to the art of the credited artists. She eventually came to fill John Romita’s role as cover designer, but was never offered Romita’s art-director title — a classic case of a female “hidden figure” whose contributions remained in the shadow of her male colleagues.

As an itinerant Marvel penciler, Severin did fill-in issues for titles as diverse as Spectacular Spider-Man, Incredible Hulk, Supernatural Thrillers, Submariner, GI Joe, Heathcliff, Giant-Size Chillers, Conan the Barbarian, Doc Savage, Power Man, Amazing Adventures, The A-Team, Fraggle Rock, Fallen Angels and Muppet Babies, but generally did not remain on a series long enough to become associated with it. Which is not to say that she didn’t create lasting concepts at Marvel. Among her creations: Severin was responsible for the look of the three-headed Living Tribunal in Strange Tales #157 and did the character designs for Spider-Woman and Howard the Duck’s Doctor Bong. She penciled the first two issues of The Cat.

One series that Severin was able to put her stamp on was Kull the Conqueror, which she drew from 1971 to 1973 (issues #2-10). Her brother inked her pencil art on Kull, and the two made a strong team. But her most distinctive work lay in her humorous cartooning. She was a major presence in all of Marvel’s humor anthology titles, which, after Not Brand Echh, included Spoof from 1970 to 1973, Crazy magazine from 1975 to 1981, and What The —?! from 1988 to 1993. She won a Shazam Award for Best Penciller of humor comics in 1974.

In the 1980s, Severin provided color guides for Russ Cochran’s reprints of classic EC comics. She continued to draw fill-in stories for Marvel into the 1990s, including a brief return to Doctor Strange in 1995 (Doctor Strange Sorcerer Supreme #78-79), but more and more she was assigned to special projects, including illustrations for toys, costumes and movie tie-ins, as well as Marvel’s short-lived line of children’s books. Post-Marvel, Severin inked some Claypool titles including Elvira and Soulsearchers and Company and penciled Soulsearchers #31 (1998). She also colored DC titles such as Pinky and the Brain (#27), Supergirl Plus (#1) and most issues of Superman Adventures between 1996 and 2002.

“I always thought of myself as an artist, but I enjoyed coloring,” she told interviewer Jon Cooke (Comic Book Artist #18), “because I still feel today that coloring is the last stage of storytelling. And it’s very important.”

Severin suffered a stroke in 2007, which put her out of action, but not before she revisited EC again by recoloring a 2004 Fantagraphics collection of Bernard Krigstein’s comics. On the occasion of the book’s 2013 paperback edition, Publishers Weekly (March 1, 2013) said, “Her crisp new watercolors are a minor revelation, not only as an attraction in themselves, but because they allow for a clearer reading of Krigstein’s lines.” It was a rare acknowledgment of the artistry she had brought to comics pages in a lifetime of working with color.

She often told interviewers of her love of stained-glass windows. “I've always been fascinated with colors,” Severin said, to Katherine Keller on the Sequential Tart website. “As a kid in church, I'd just sit and watch the colors change; instead of paying attention to the mass, I was just watching the colors change.”

Severin was inducted into the Will Eisner Award Hall of Fame in 2001 and Comic-Con International presented her with its Icon Award in November 2017. Her brother John died in 2012 at the age of 90. 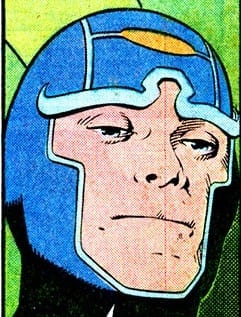 A Girdle with a Pouch 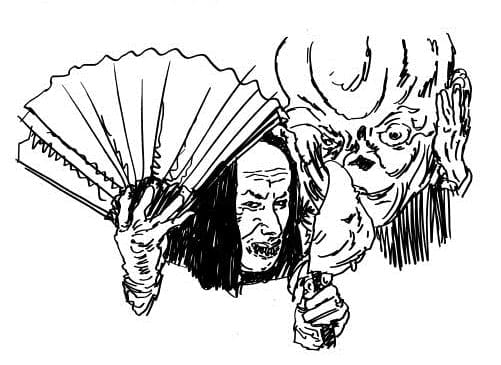 Where I’ve Failed You