Marc Bell has been preaching the gospel of artist Joe Hale for many a year. Hale release a handful of comics in the 90s before moving on to painting. These comics have been highly influential -- passed along and bootlegged over the years between various circles of cartoonists and enthusiasts, myself included. Last year Swimmer's Group released a Bell-edited collection of Hale's work entitled Love & Forgiveness. Included therein is this following conversation, which we're running here. 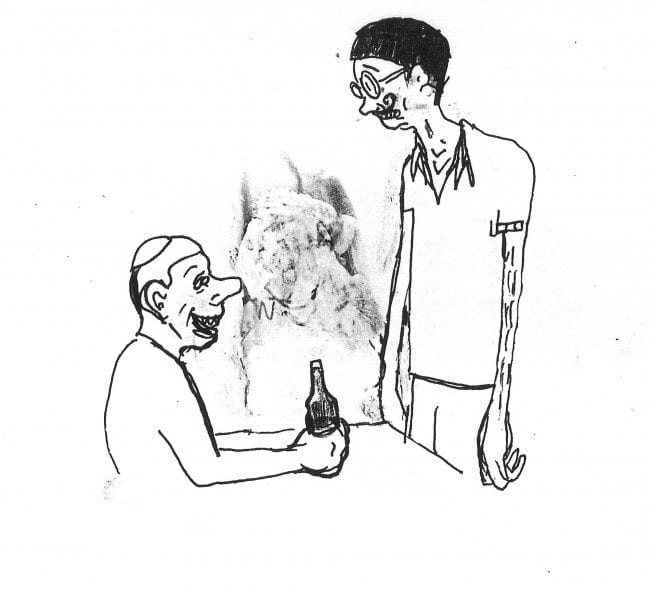 Marc: We discussed how it might be important to provide a little context for this book. Can you talk a little about when and where this work was made?

Joe: I made this work between the ages 19 and 22, mostly in Montreal, some of it in Toronto. I was an enthusiast of the underground comic medium and wanted to contribute to the practice. In the 90's Montreal had a flourishing underground comics culture, so I positioned myself there to create this material.

J: I wanted to satirize the autobiographical format, and present a character named Joe Hale who came from a world of unimaginable dysfunction. The formula for the humor in this collection is very dark, which is objective, my natural humor is much less offensive and more zany than morbid. I also wanted to portray the human character as extremely ugly, something not so much worthy of love and forgiveness. For the audience who thought it directly related to my life, well, that was an inside joke. I couldn’t help such an uncritical and undiscerning audience to begin with, so, I guess I didn’t really care.

M: Could you gauge any of the reaction to this material at the time? Or were you even interested in that? It was a different time. I know Louis Rastelli (editor of Fish Piss) had mentioned there was a very positive reaction to your work that appeared in his magazine. I think it was “The Journey” that appeared in there? 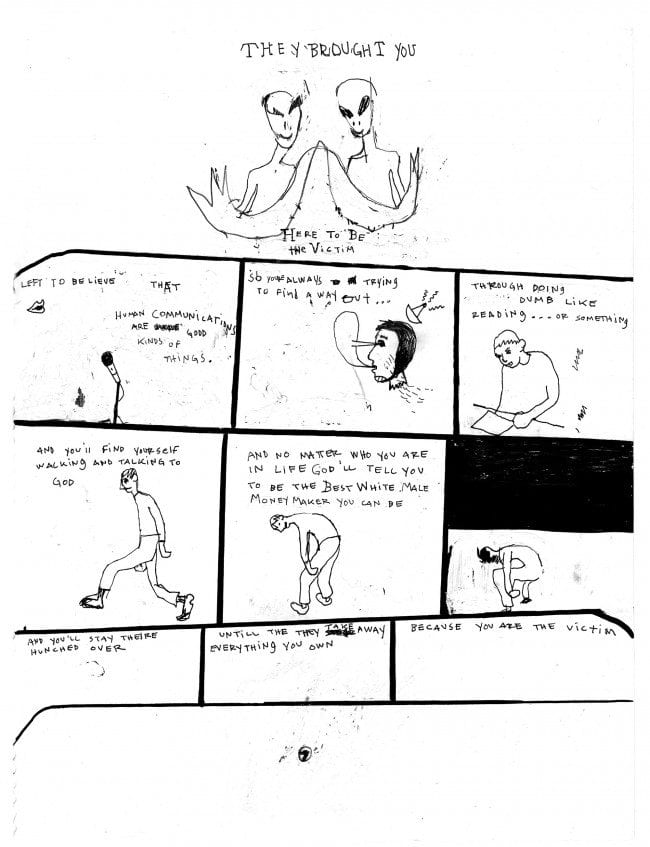 J: The reactions were extreme. For those who loved it, I felt concern for them. For those who hated it, they had my sympathy. CF loved it, I later found out, and was exposed to my work through the efforts of Mr. Rastelli. Vice were on my case to do more for them at the time. I didn’t want to be a wiener poster child for their cause. In short, I hate people who are obsessed with being cool.

M: Regarding CF, I saw a little something in CF’s mature style that reminded me of your work, something to do with the tone and the line. Or maybe the way he distills his drawings? I am sure he has a variety of influences, like everybody, but I always thought CF must have seen your work at some point. Or maybe he just saw something in your work that he recognized. Have you looked at his work? Can you see any of you in there? Maybe I am wrong about all this.

J: There was a contemporary painting essay put out by Penguin USA where they compared me to CF, but called me “Joel Haley” instead of Joey Haley. I go by Joey Haley in the art world, my actual name. And it included images of mine without my permission. Typical, I thought. Anyway, that was the first time I had heard of CF. I’ve seen things here and there, but I don’t totally see the connection. I had brief correspondence with him this year and he gave me some nice praise and mentioned that he was really inspired by “The Journey”, but, you know, I don’t think he saw the whole thing, just an excerpt... then he mysteriously vanished.

M: I always saw these stories as having one foot outside of comics. Storybooks? Sort of like how Edward Gorey’s work isn’t exactly comics. Where there any non-comics kind of stuff that influenced these that you care to mention? I know you love The Hardly Boys by William Wegman...

J: I love William Wegman, I love a lot of contemporary art which doesn’t relate to these works. I was really inspired by alternative comics, Marc, I was a fanatic of the genre. Primarily, that’s it. No other outside influences. 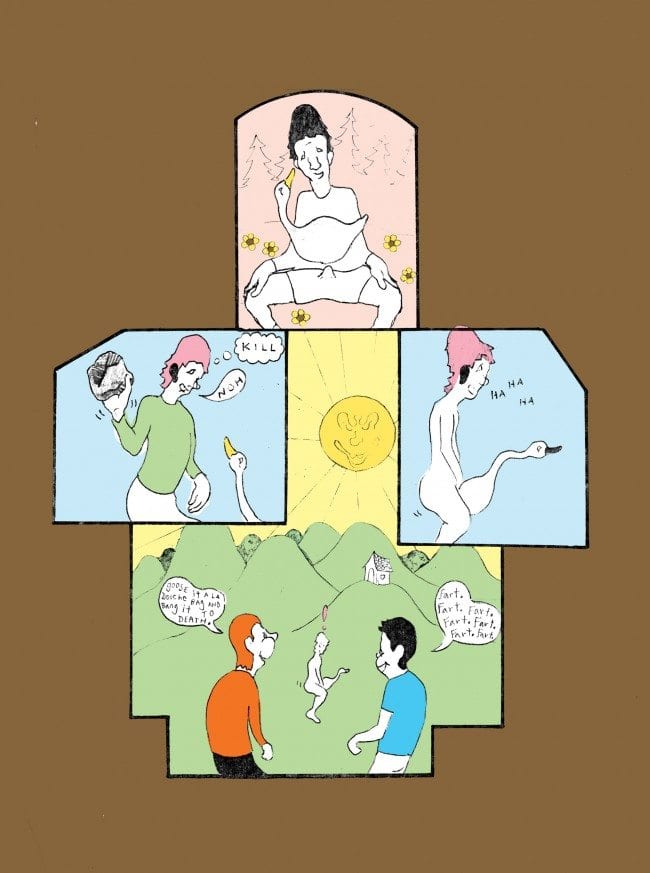 M: You did mention that you intended "The Retard" to look like early Disney. And "new wave". Is there a particular Disney film you are riffing on here or are you just picturing the whole idea of early Disney in your mind's eye?

J: I wanted the vintage Disney look. Also, there was another Joe Hale who was a

Walt Disney cartoonist back in the day, so I thought it would be suiting to borrow from the Disney influence for that reason as well. And yes, I wanted a more new wave looking comic, I was a little tired of my vitriolic line style.

M: You have made lots of other things since making these comics. Paintings and drawings. Music and some video work (short films). I can see how they relate in some way, there is always a dark humour in this stuff you do. How do you see the relationships between all of this activity?

J: When you create something dark, you instantly give that piece a severe life force, that's perhaps why the themes are as such in my work. I was making a lot of conceptual based art in the ‘90's that in no way shared a relationship with this work. In ‘99 I returned to the practice of painting and drawing, which relates more to this early achievement because my current work is illustrative, involving the figure, etc. There’s a lot of edgy themes in my art practice, keeping the formula alive, I guess, and working with that type of synergy in order to create this desired effect. I like making scary, dark things, I’m that type of creator. Remember that Hitler painted beautiful landscapes. My work is objective, it’s based on a formula I created in University, it’s not a naive expression of what I consider my soul to be.

M: OK, maybe that's what I am getting at. Maybe that's why I see these as having one foot outside of comics. I think these things you made have a real intense power that I don't know if I have seen in other comics. Did you really move to Montreal to be around the comic scene there?

J: Absolutely. Pre-internet some of us just had our ear to the ground. I was amazed at how organized the Montreal cartoonists were then. All the high-end stuff was Francophone, in my opinion, and I wanted entry. And so, yes, I made Montreal an intentional destination for this pursuit. I started visiting Montreal in high school, so I was aware of Julie Doucet, Rick Trembles, Henriette Valium, etc. It was amazing, within a month of being there I did a launch with Julie and Rick. Gavin McInnes too, unfortunately. But my interest waned as I got older. I also wanted to work in other mediums, like performance art, video art and photography. Installation. In the end I found the challenge of painting and drawing greater. I also went back to that discipline because of location. Being in rural Canada, I needed to think about exporting art outside of this region, paintings translate to the viewer immediately, unlike conceptual art. So, by this strategy, I got my work into an international circuit. And now I’m excited about alternative comics again, so maybe I will do another series upcoming. 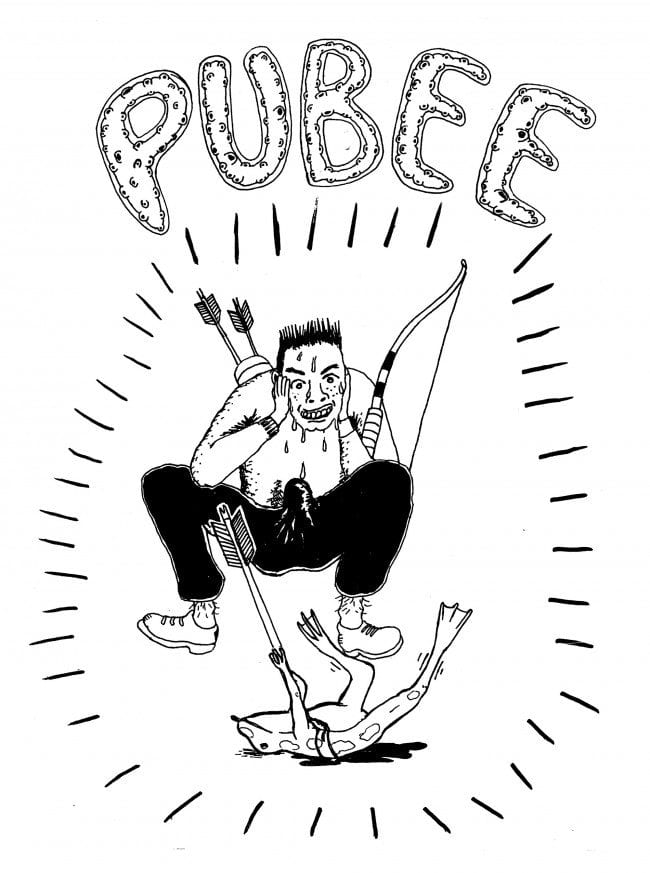 M: Now, in a self-published book you made back then, there was a drawing of "Pubee". It seemed like an ad for something that was coming up. You mentioned this was a story you made with your friend Eugene? Is that his drawing or is it both of yours (or yours?)

J: Pubee is mainly the effort of Eugene Jibiki. The Pubee image was used to advertise his creation, which I helped with creatively and in minor ways graphically too, but its mainly Eugene's baby. Eugene is an old friend and he was also my roomate in Montreal. I think  Pubee might see the light of day in the future, so I don’t want to give too much of that away, but I will say that it is a masterpiece of twisted humor. 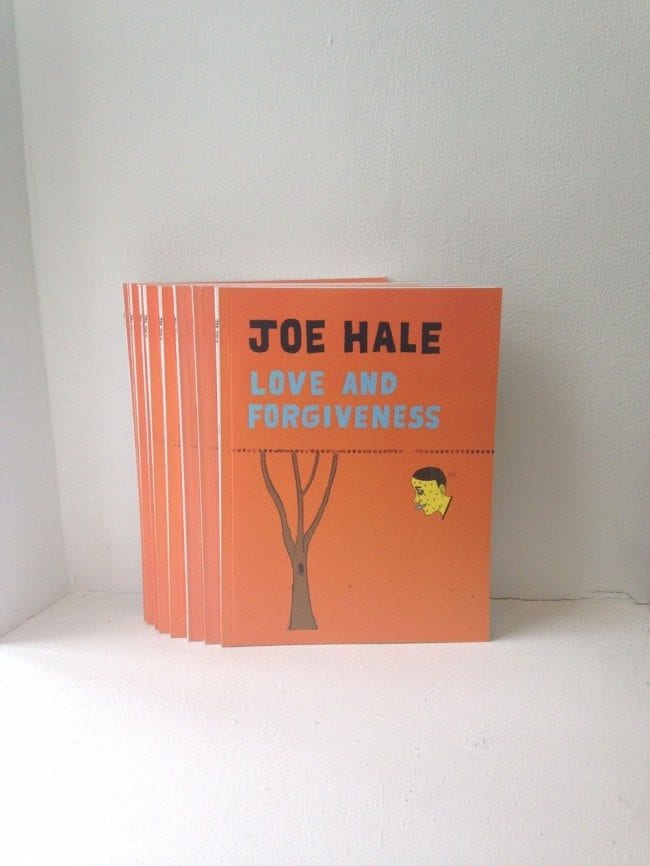 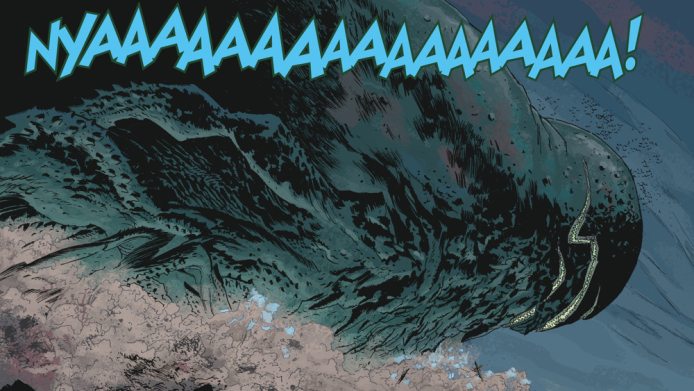 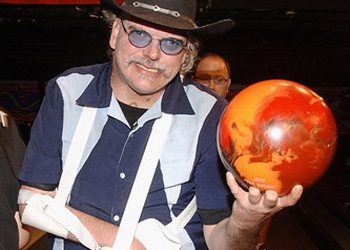