Today at The Journal, we've got cartoonist and critic Katie Skelly interviewing comics writer Alex de Campi about the Twisted Romance comic series that launched via Image this very week.

Sentimentality is a desperately under-used weapon in comics. So much of it is about the widescreen explodo. But ultimately, you never remember the explosions. You remember the stories that made you cry. That should be every writer's objective going into every story they write: make 'em cry once, make 'em gasp once, and try to give them some pants feelings at some point. William Mortensen, in his wonderfully kooky The Command to Look, paraphrases Cecil B DeMille about the three things you need for a successful picture: sex, sentimentality and spectacle. You can make do with two, for a mediocre story. And you can be macho as fuck and sentimental at the same time: I present to you the entire cinematic oeuvre of Sam Peckinpah, the man who, with Naoki Urasawa, taught me how to hold a reaction shot.

And then, for something completely different, we've got Frank Young on Frank King--a review of the latest giant sized tome from Sunday Press. It's an excellent review that I feel the need to cheapen by pulling the one quote where he mentions Jake Gyllenahaal.

Photographs of the young Frank King bring to mind the actor Jake Gyllenhaal, circa 2004. One can see a similar glint in King's eye, a brashness in his smile and an undisguised enjoyment of his life and work. King was at first in the shadow of the Tribune's master editorial cartoonist John T. McCutcheon. As one of the lower-status Trib cartoonists, King soldiered through spot illustrations for news stories, feature article illustrations and the occasional comic strip.

ELSEWHERE? Today, the thing I'd recommend you take a look at is Michel Fiffe's recently published posts on a re-reading of the Titans, part one being here, part two being here. For years, the Titans seemed like the only thing DC had that could outsell Marvel (if you only paid attention to single issue sales--Marvel still can't seem to manage to find perennial selling trades like Batman Year One, and when they do, they tend to let them fall out of print endlessly), and I enjoyed Fiffe's attempt to dive so wholeheartedly into a series that, like the X-Men, tends to reward and repel in equal measure, at an increasingly heightened rate, the longer you expose yourself I also have a lot of affection for Titans Hunt, one of those genuinely exciting who-fucking-knows extended storylines that consists of loading up as many spinning plates as possible, up until you just go fuck it, let's add a vampire from a dystopian future, nothing can stop us. 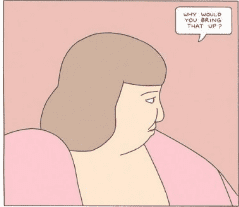 Why Would You Even Bring That Up?