Welcome back. This blog space has been inactive since last Wednesday, due to the American Thanksgiving holiday, so there's a lot to catch up on.

First, today we bring you an obituary of Al Plastino, one of the iconic Superman artists, written by Bob Hughes.

We also have arranged the publication of two key excerpts from Last Superman Standing: The Al Plastino Story, a forthcoming biography of the artist written by Ed Zeno. Here's a bit from that:

Al Plastino was impressed with Wayne Boring’s art: “They gave me some of his pencils to ink early on. This helped give me a feeling of how Wayne drew Superman.” He occasionally saw the older man (born in 1905) in the art room at DC, though not too often, since most of the guys worked from home. The two artists got along fine. “Wayne had really tight pencils.”

Nevertheless, Plastino had mixed feelings while under his senior’s shadow. When he looked at “The Three Supermen from Krypton!” from Superman #65 (July–August 1950) from today’s perspective, Plastino noted: “That is crap, because I was still influenced by [him]. But at least you can follow the story. My faces were lousy, but they were consistent.” When asked why he broke from following Boring’s lead, Plastino said, “No one said change it. Wayne’s work was really clean cut and professional, though the characters were a little stiff. It almost hurt me to draw like him. I tried to keep the look consistent, but it gradually did change.”

Because Jack Schiff was handling Wayne Boring’s work, he was also Plastino’s first boss at DC Comics. The goal was to maintain Superman’s artistic continuity. “Jack was one of the editors for Superman. He was a mild guy, very shy and gentle, nothing like Mort Weisinger. Jack was not a good idea man, unlike Mort, who was a great idea man. He would just say, ‘Here is the story, Al.’ He wouldn’t give directions, per se. I started working with Mort a little later.”

Last week, we were gone, but our columnists kept going. Frank Santoro turned in a short post on sexism last Thursday, and Tucker Stone and Abhay Khosla turned in a much longer column offering advice to young men aspiring to work in a sexist comics industry. Here's a snippet from that column's legal disclaimer:

LEGAL DISCLAIMER: This week's column is not referring to any specific individual, entity, person, event, or thing that exists or has ever existed or that may exist, that is either living or dead or neither, that is even a thing that has been contemplated as a possibility of a thing living or dead or neither. It refers to nothing. As an example, if this column should refer to the disastrous employment practice reputations of any company in the comics field, any resemblance of the company that is described to any company that actually exists in reality, including but not limited to, as a wholly random example, DC Comics, it is wholly coincidental and unintentional on the part of the authors as well as The Comics Journal -- any comic company described in the column should be understood to have no real-world significance and the column itself should be understood to be at most a shoddy work of fiction or some lesser form of random typing that should be given by this or any other reader even less weight than fiction. Indeed, the fact that the mere letters utilized resemble words that are understood by the reader should be seen by the reader more often than not as an unpleasant coincidence. Nor should the timing of this particular column be understood to be referring to any real world events, including but not limited to any news items that may have appeared either on this site or any other site, anywhere in the known universe, this year or any other year in the past or in the future, in perpetuity. [And so on...]

—News. [UPDATED TO ADD: My co-editor Dan Nadel has announced that his company PictureBox will no longer be releasing new titles as of December 31. He gave further details and explained the move to the Comics Reporter.]

The New York Times also published an obituary of Al Plastino. Mark Evanier comments on how unlikely such an article would have been only a few decades ago, and also airs some skepticism regarding the timing of the Superman/JFK story that has been in the news lately due to an ill-fated Heritage auction (detailed in both the Times and the TCJ obituaries).

The political cartoonist Ted Rall claims that he was asked by an administrator of Daily Kos to stop posting cartoons that depict President Obama as "ape-like." Rall (and fellow cartoonist Ruben Bolling) plausibly argue that Rall depicts most of his characters that way. Rall and Bolling describe this as a case of censorship.

Usagi Yojimbo creator Stan Sakai and his wife Sharon are reportedly facing tremendous financial bills to deal with medical issues. You can learn how to help through the Cartoon Art Professional Society here. Mark Evanier has more details here. 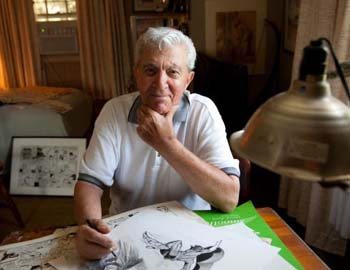 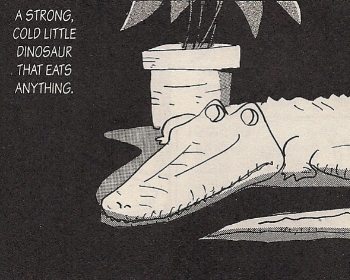