There were many Kim Thompsons: among others, there was Kim the translator, Kim the anthologist, Kim the hands-on editor, Kim the publisher working with Gary Groth (and later Eric Reynolds) to shape Fantagraphics into a distinctive line. The first Kim Thompson I encountered was Kim the critic, who tended to get lost in the busy shuffle of the various other Kims who were doing so much other good work. Kim the critic played an essential role in shaping my sensibility, though, so I want to say a few words to memorialize that strand of the Thompson legacy. 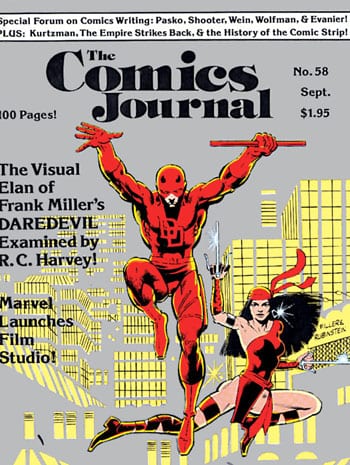 In the fall of 1980, when I was thirteen years old, I bought my first issue of The Comics Journal, issue number 58. I was attracted to the Frank Miller cover (I was only 13 years old for God's sake), and the promise of an essay on "The Visual Elan of Frank Miller’s DAREDEVIL Examined by R.C. Harvey!” Not to take anything away from Bob Harvey’s sharp essay on Miller, which was my virgin encounter with the Harvey-esque notion of a verbal/visual blend, but for me the most significant pages of that issue was Kim Thompson’s review of a reprinting of Harvey Kurtzman’s Two-Fisted Tales.

My enthusiasm for Frank Miller, for better or worse, didn’t survive another two birthdays (Kim’s review of the first issue of Ronin still seems accurate not just about that work but about the severe limits of Miller’s artistry). Conversely, my appreciation for Harvey Kurtzman continues to grow, still aided by the perceptions that Thompson awakened and articulated in that long-ago review.

Kim’s review was written with his characteristic clarity of expression and ability (rare among comics critics) to zoom in on the mechanics of storytelling, to describe not just a narrative but the visual language which is inseparable from whatever impact that narrative has. There are many comics critics who write as if their exclusive focus is on the words of a story, who obliviously skip over the complex visual language cartoonists have spent centuries developing. Kim was not of that ilk. Any Thompson review gave you a sense of what the art looks like, and how the images functions as part of the overall effect.

Here is Kim on Kurtzman’s art: “The haunting, agonizing strokes of his brush distil the tortured forms of the men, machines, and landscapes into masses of power that are simply breathtaking.” Anyone who has ever read Kurtzman’s “Rubble!” will attest to the accuracy of that phrase “masses of powers” which encapsulates perfectly Kurtzman’s vision of war, which wasn’t that of a pacifist but of a humanist and realist appalled at the organizational and mechanical systems our species has created to unleash destruction. In Kurtzman's war comics we see again and again all human action been reduced to the level of brute force, with physical brawn being no match for mechanical engines of destruction (this realistic devaluing of bodily prowess being the core difference that sets Kurtzman's work apart from other comics).

From the same review, here is Kim turning his eyes towards the often disdained form of the comic book sound effect: “Nowadays (and, all things considered, probably back then, too), sound effects are looked on with some scorn both by outsiders and insiders, while they are enthusiastically embraced by those who wish to promote the more pop, campier aspects of comics. Frequently, when comics writers decide to get ‘serious,’ the first thing to go is the onomatopoeia – as Roy Thomas did with Conan the Barbarian in the 1970s. Yet onomatopoeic writing is a widely accepted device in both classical and modern poetry, and fits perfectly within comics’ mixture of prose and picture. Rendering the sound of a submarine klaxon as Ah-oooooh-gah!, or that of a jeep that won’t start as Gna gnagna gna gna may not quite be poetry, but it certainly is a an inspired way of communicating sound on the printed page.”

These comments are a good example of Kim’s sturdy common sense, his erudition (which extends to both Roy Thomas and poetics), and his response to the particular techniques that an artist deploys on the page. All of these qualities show up time and again in Kim’s criticism. Aside from these virtues, there was also Kim’s legendary cosmopolitanism. Not just his translations but his essays on figures like Hergé and Tardi opened up a world to North American readers.

Like Gary Groth, Kim has sometimes been caricatured as a purely negative critic. And it’s certainly true that when he wanted to destroy an over-hyped comic, Kim could unleash a stunningly effective barrage of well-chosen invective. But in fact, Kim (and Gary as well) was at his best when praising something he loved, in trying to share his appreciation with the rest of the world. The Kurtzman review is only one of many examples of this.

The mark of strong critics is that you take their views seriously even when you most sharply disagree with them. Or as F.R. Leavis once said, the essential critical sentence is “Yes, but—" There were many occasions where my own impressions diverged sharply from Kim’s. I’ve plowed through many issues of Dave Sim’s Cerebus because of Kim’s eloquent advocacy, but I’ve never been able to quite see in that work what Kim did. Kim was also dismissive of Jack Kirby’s 1970s work in ways that I thought were unfair. (A generational divide might be at work here. In my experience it helps to be born after 1965 and not grow up with Stan & Jack era Marvel comics to appreciate 1970s Kirby). The mental arguments I’ve had with Kim are as much a part of my education as the words he wrote.

The Comics Journal was a crucial part of my formation as both a comics reader and someone who write about comics. The literary journal The Sewanee Review once did a series devoted to “The Critics Who Made Us” highlighting figures like Lionel Trilling, F.R. Leavis, and William Empson. The canon of good comics criticism is a minuscule fraction of what has been achieved in literary criticism. Yet still, for those of us who care about comics enough to also value passionate and engaged comics criticism, there is a small contingent of “critics who made us.” Among the writers for The Comics Journal, my personal pantheon includes Gary Groth, Carter Scholz, Dale Luciano, R.C. Harvey, Anne Rubenstein, R. Fiore, Rob Rodi and, certainly not least but in fact high on the honor roll, Kim Thompson. 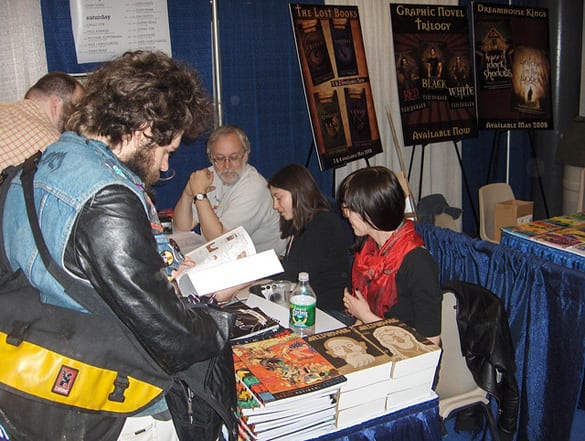 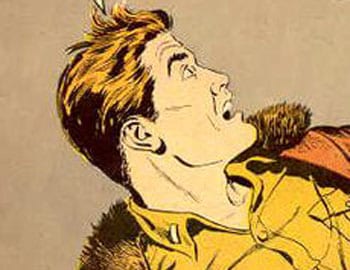