A boy named Barnaby wishes for a fairy godmother. Instead, he gets a fairy godfather who uses a cigar for a magic wand. Bumbling but endearing, Mr. O’Malley rarely gets his magic to work — even when he consults his Fairy Godfather’s Handy Pocket Guide. The true magic of Barnaby resides in its canny mix of fantasy and satire, amplified by the understated elegance of Crockett Johnson’s clean, spare art. Using typeset dialogue (Barnaby was the first daily comic strip to do so regularly) allowed Johnson to include — by his estimation — some 60% more words, giving O’Malley more room to develop a rhetorical style that, as one critic put it, combines the “style of a medicine-show huckster with that of Dickens’s Mr. Micawber.” In its combination of Johnson’s sly wit and O’Malley’s amiable windbaggery, a child’s feeling of wonder and an adult’s wariness, highly literate jokes and a keen eye for the ridiculous, Barnaby expanded our sense of what comics can do.

Though one of the classic comic strips, Barnaby was never a popular hit — at its height, it was syndicated in only 52 papers. By contrast, Chic Young’s Blondie was appearing in as many as 850 papers at that time. As Coulton Waugh noted in his landmark The Comics (1947), Barnaby’s audience may not “compare, numerically, with that of the top, mass-appeal strips. But it is a very discriminating audience, which includes a number of strip artists themselves, and so this strip stands a good chance of remaining to influence the course of American humor for many years to come.” He was right.

—Since the last time I posted on this blog, the comics internet erupted with controversy over the Eisner Awards judging, especially in regards to past comments by Frank Santoro (who, as all readers surely know, is a Journal columnist and my friend), only to die down almost as quickly once the facts came to light. At this point, I don't know how much there is to add to what's already been said, but I think that Tom Spurgeon and Heidi MacDonald are both well worth reading. (My take in a nutshell: You want judges who have strong tastes and opinions, and Frank is one of the most knowledgeable people about comics I have ever met in my life.)

There are plenty of non-Santoro-related Eisner Awards links to share, too, including judge Michael Cavna's memories of the nomination process, and quick takes on the event from all of the judges on the Eisner website.

—In other awards news, the Stumptown awards nominations have been announced, and are now open for voting, and Natalia Yanchak, one of the Doug Wright Awards judges, writes about those awards for the Huffington Post.

—And in still other awards news, Sammy Harkham's Everything Together has just won the L.A. Times Book Prize.

—Double shot of Miriam Katin now: with a studio visit at the Paris Review website, and an interview at Inkstuds.

—Librarian Carol Tilley writes about the recent Persepolis debate for the CBLDF.

—Small publisher news: Sparkplug Books has announced that Virginia Paine will be taking over ownership of the company, and Domino Books owner Austin English announces an imminent move that will affect several small publishers and cartoonists, including Domino, Rebus, Revival House, etc., and says this would be a particularly good time to buy some Domino books if you're so inclined. (I'd guess the same is true for Rebus and Revival House.)

—The Beat has been on a roll lately, with another very solid post on Gilbert Hernandez and children's comics.

Crockett Johnson and the Invention of Barnaby 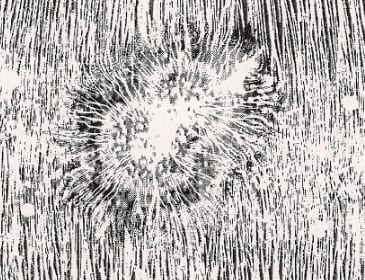 THIS WEEK IN COMICS! (4/24/13 – An Imaginary Contretemps Between Two Comics Greats Occurring in Sidebar to the Intellectual Scene)