Comics creator Joe Kubert has died. He was 85.

Born Yosaif Kubert on September 18, 1926, in what was then southern Poland (now Ukraine), his family emigrated to America when he was an infant. The Kuberts settled in a Jewish ghetto in Brooklyn known as East New York. Inspired by the colorful Sunday newspaper strips, Kubert decided at an early age that he wanted to be a cartoonist, and by 1939 he was working in the comic book production shop of Harry “A” Chesler in Manhattan.

Kubert received his only formal art training at the High School of Music and Art in New York City, a school for artistically gifted youths. Most of his training was “on the job” from such legendary comic book artists as Mort Meskin, Charles Biro, Irv Novick and others. At 14, Kubert was assisting on “The Spirit” in Will Eisner’s studio in Stamford, Connecticut. 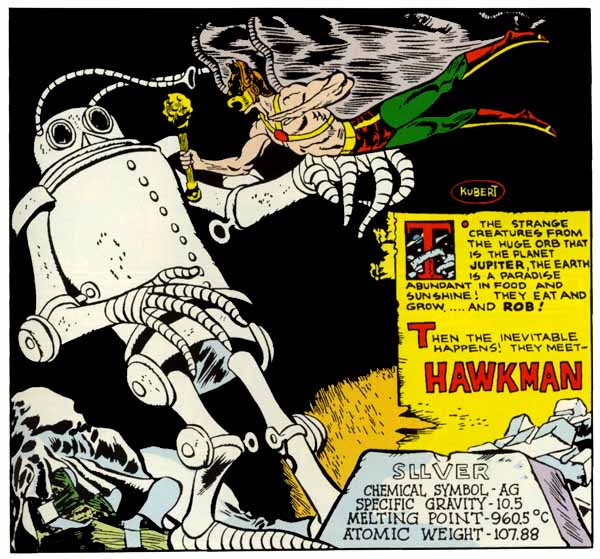 After stints in comics shops run by Jerry Iger and Emanuel Demby, when his work was published by Quality, Fiction House and Fox comics, Kubert  began receiving assignments on his own. His first solo work was on Volton, the Human Generator, a back-up feature in Holyoke’s Cat-Man Comics in 1942. He inked Mort Meskin on the Vigilante in Action Comics, Bob Montana on Archie, and did solo work for Harvey’s All-New Comics and on Black Cat in Speed Comics. His break came in 1944, just as he was graduating from high school:  drawing Hawkman for All-American Comics under the tutelage of editor Sheldon Mayer. Mayer coached the enthusiastic young artist, helping him become a full-fledged professional by the time he was 20.  Kubert’s work on Hawkman in Flash Comics and All-Star Comics established him in the business, and after that, there was no stopping him. 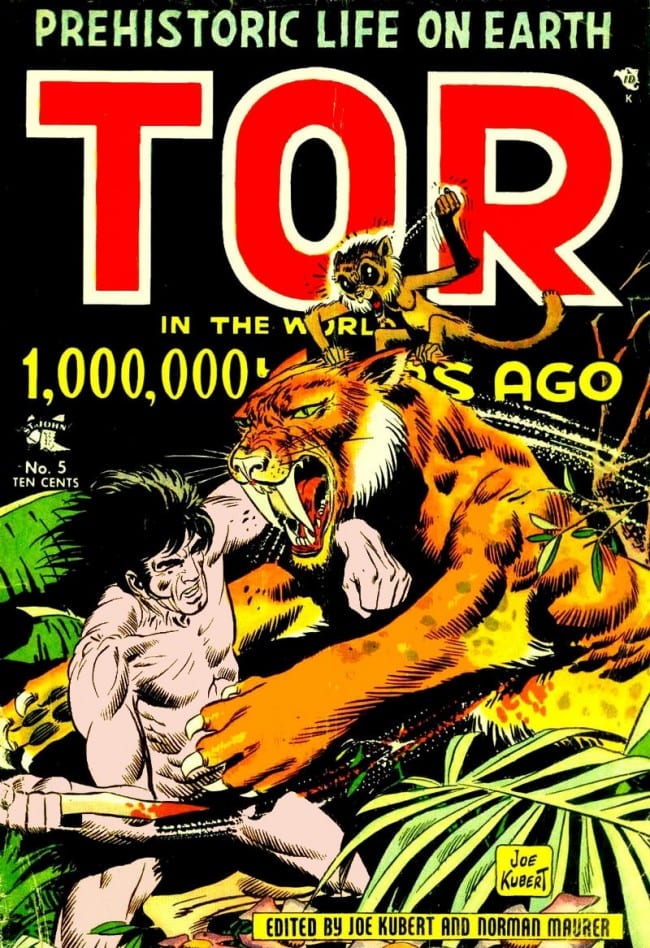 Kubert’s work evolved a great deal in the 1950s. He began the decade working in several genres, including Western, pirate adventure and romance.  After a stint in the military, he partnered with Norman Maurer to pioneer 3-D comics for St. John publishing, which set off a brief 3-D comics craze in 1953. His best remembered work from this period was on Tor the Hunter, his “caveman with a conscience” that showed what he could do as both writer and artist. Kubert also drew war comics for EC, horror for St. John and Marvel, and crime stories for Lev Gleason. Once the 3-D craze ended, and the Comics Code Authority was established in late 1954, he began working virtually full-time for DC Comics for the next 20 years. 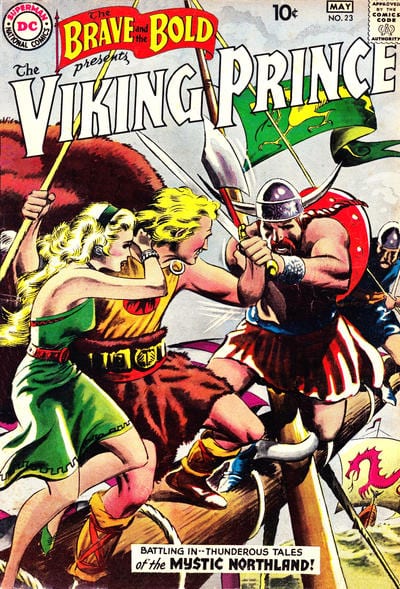 From 1955 to 1959, Kubert teamed up with editor-writer Robert Kanigher on the DC war comics and on Viking Prince in The Brave and the Bold.  The Kanigher/Kubert Sgt. Rock of Easy Company was introduced in 1959, and became one of the most successful new Silver Age characters from DC. This series, which ran in Our Army at War, established Kubert as the premiere artist of DC’s “big five” war titles. Though he drew the Hawkman tryout issues in Brave and Bold in 1961-2, most of his work was in the war comics through the 1960s, notably on Sgt. Rock and Enemy Ace, the German World War I flying ace. 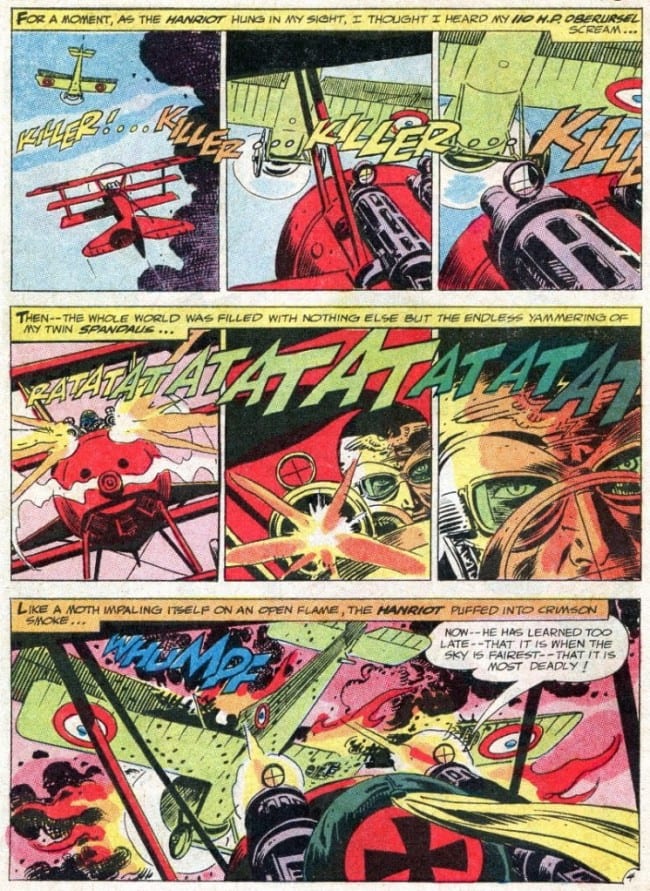 In 1965, Kubert achieved a life-long dream when he became a newspaper syndicated cartoonist with Tales of the Green Beret, a strip based on Robin Moore‘s book The Green Berets. He drew the successful, if controversial, feature through the end of 1967, then returned full-time to DC. In 1968, Kubert became editor of the war comics line, and had the distinction of being an editor-writer-artist on both Sgt. Rock and his adaptation of Edgar Rice Burroughs’ Tarzan. Some rank his Tarzan work from 1972 to 1977 as second only to that of Hal Foster on the Sunday Tarzan pages of the 1930s. Kubert's self-created Unknown Soldier was introduced in Star Spangled War Stories in 1970 and ran for 12 years, claiming the book's title along the way. 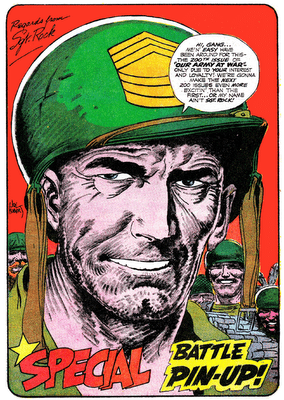 In 1976, Kubert established The Joe Kubert School of Cartoon and Graphic Art, an accredited institution in his hometown of Dover, New Jersey. His school drew aspiring cartoonists from around the globe, and turned out hundreds of working professionals in comic-books, animation and other fields of graphic and digital art over the years. Renamed The Kubert School in 2011, it will continue to operate under the aegis of Kubert’s sons Adam and Andy, both top tier artists in comic books.

Kubert began producing graphic novels with Abraham Stone (1990), Fax from Sarajevo (1996), Yossel April 1943 (2003), Jew Gangster (2005) and Dong Xoai, Vietnam 1965 (2010).  Fax from Sarajevo won both the Eisner and Harvey Awards as best graphic novel of 1996. Kubert also created graphic novels featuring Tor and Sgt. Rock in recent years, while continuing to do work in comic-books from DC, Dark Horse and other publishers. He was inducted into the Harvey Awards' Jack Kirby Hall of Fame in 1997, and Will Eisner Comic Book Hall of Fame in 1998. Fantagraphics published Man of Rock, a biography of Kubert in 2008 and The Art of Joe Kubert in 2011.

Joe Kubert will be remembered for his sinewy, passionate drawing and his consummate storytelling skills. He brought a noir element to mainstream super hero comics (with Hawkman in 1961), and influenced many artists including Neal Adams, Frank Miller, Jordi Bernet, Steve Ditko, Jacques Tardi and Billy Tucci. He will also be remembered as an educator, an innovator and a Jewish artist of consequence. Few can match the length and breadth of his contributions to the graphic story medium.

He is survived by his five children and numerous grandchildren. His wife Muriel passed away in 2008. 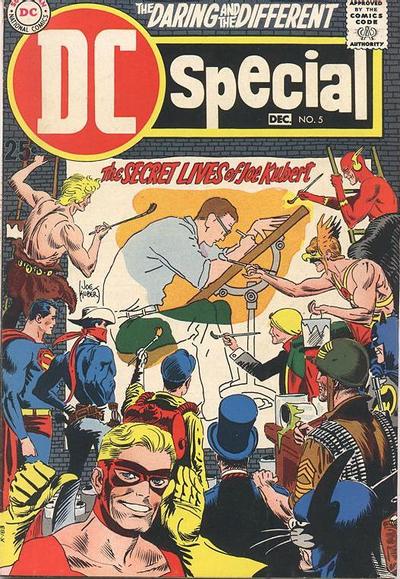 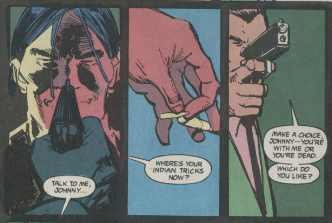 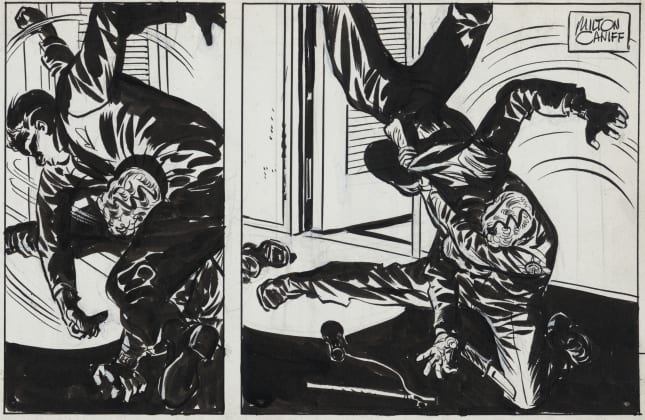