Irwin Hasen, one of the last surviving Golden Age artists, and the co-creator of the classic character Wildcat has died at the age of 96. Hasen had a long career in comics, beginning in 1940 at the Harry "A" Shop, followed by a thirty-two year run as the artist of the Dondi newspaper strip, and was a well-regarded longtime member of the Joe Kubert School faculty.

Born in Manhattan in 1920, Hasen grew up in Brooklyn. His family later moved to 110th Street and Amsterdam Avenue in Manhattan, and he attended DeWitt Clinton High School. He began training as an artist in 1939 due to his family's proximity to National Academy of Design. In an interview with comics writer and historian Roy Thomas that ran in Alter Ego, Vol. 3, No. 1 (1999), Hasen noted: "Across the street was the National Academy of Design, a huge structure like a garage, an airplane hangar. One of the oldest art schools in America, one of the most prestigious. Classical art. I was always drawing. I was drawing... on the empty pages of books. So my mother, God bless her soul, took me across the street and enrolled me in a course of drawing... I was there for three years, every night during the week, drawing in charcoal all the statues of Michelangelo and all the Bernini, and all the classics..." Because his family lost everything during the Great Depression, Hasen began his art career at the tender age of 15. "During the day, I would hawk, sell, drawings of prizefighters down in New York. That was my first job—boxing cartoonist. I made a very small, very slight living. I was 19-20 years old. I sold my cartoons to the Madison Square Garden Corporation. They were printed all over New York in different newspapers. It was like public relations for the fights." In a December 16th, 2011 New York Times feature profiling him, Hasen recalled, "At a young age, I was suddenly around a seamy bunch of people — gangsters, fight promoters, champion boxers…"

Hasen began drawing for comics in 1940 in the Harry "A" Chesler shop, depicting the four-color adventures of The Green Hornet, Cat-Man, Secret Agent Z-2, and Bob Preston, Explorer. While working for Chesler, he originated his first feature, "Citizen Smith, Son of the Unknown Soldier". Aside from working for Chesler, he also freelanced at Bert Whitman's shop and Lloyd Jacquet's Funnies Inc., Hasen started working for editor Sheldon Mayer, first at M.C. Gaines's All-American Comics, then for DC Comics after the two companies merged in 1946. 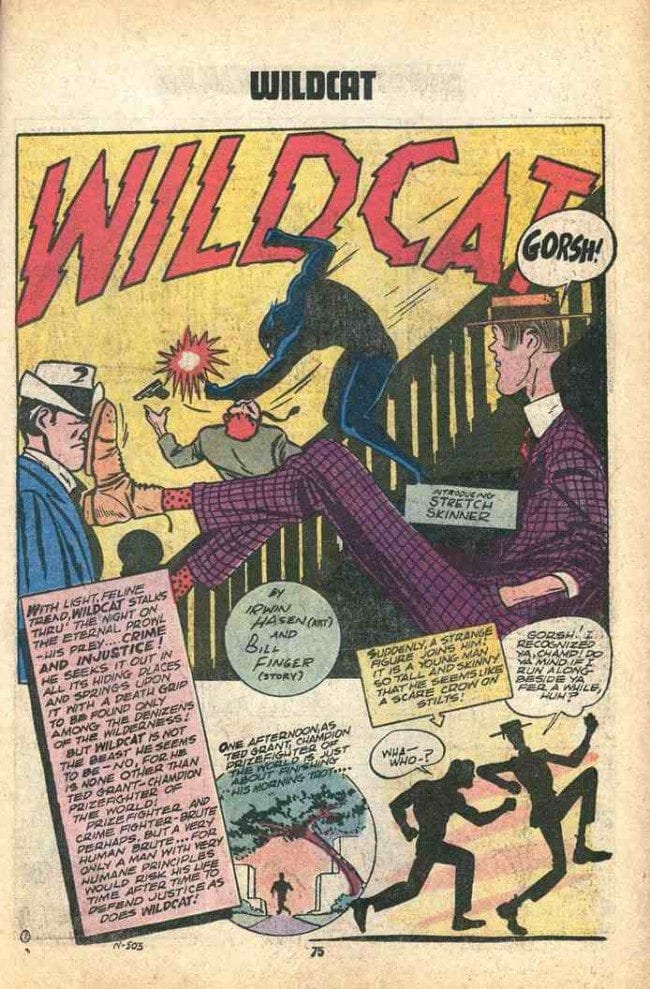 Hasen's earlier experience depicting boxers would stand him in good stead when he teamed up with Batman co-creator Bill Finger to dream up Wildcat, a heavyweight boxing champ who moonlighted as a costumed hero, initially to clear his name after getting entangled with organized crime, and whose only superpower is the cat-like "nine lives" power he had bestowed on him by magic. He also possesses extreme strength and vigor even at an advanced age. Although he has no real superpowers, his toughness and boxing skills enabled him to survive many perils in the pages of Sensation Comics (debuting in issue #1 alongside Wonder Woman, eventually becoming the second-most popular feature in the title) and All-Star Comics, where he was a member of the Justice Society of America. Wildcat trained Batman, Black Canary, and even Superman in the pugilistic arts. Wildcat was Hasen's best-known creation in comic books, though during this period, he also did stories starring The Green Lantern, succeeding original artist Martin Nodell.

When World War II broke out, the diminutive Hasen was drafted, but was deemed too short for combat, so he stayed in the States and was stationed at Fort Dix in New Jersey, where he ran the post newspaper. Already an experienced artist, Hasen learned other facets of publishing during his military service, as he told Roy Thomas, "I edited it, I published it, I took it to the printers, I learned how to set up type, I did the comic strip, I wrote the whole goddam thing, and I interviewed all the celebrities coming in from New York. I worked my ass off, and I wound up in the hospital. But that was my proudest time, editing that newspaper for a year and a half."

Upon completing his military service, Hasen returned to DC Comics, where he continued drawing The Flash, Green Lantern, comedy-relief superhero Johnny Thunder, and stories of the Justice Society. From 1944 through 1945, Hasen assayed his first syndicated newspaper strip, an adaptation of the long-running radio and TV series, The Goldbergs. In 1947, Hasen collaborated with Joe Kubert on the debut of the Injustice Society within the pages of All Star Comics #37. He and Kubert became lifelong friends, and during this period Hasen also befriended a teenaged Alex Toth, becoming a mentor to the younger artist. 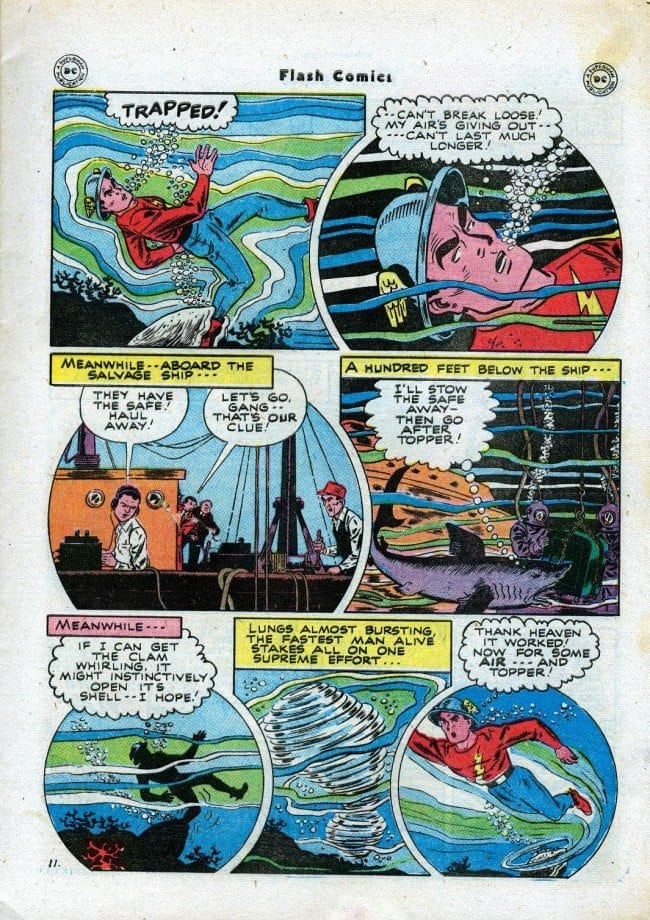 Active in the National Cartoonists Society for many years, Hasen went on a USO tour during the Korean War where he met writer Gus Edson, who proposed they work together on a syndicated strip. In 1955, Dondi debuted with Hasen drawing and Edson writing it. The strip about an Italian war orphan adopted by an American G.I. eventually ran in more than 100 newspapers and lasted until 1986, when dwindling sales caused Hasen to retire his most famous character. At the strip's peak in the early 1960s, Hasen won the National Cartoonist Society's Story Comic Strip Award in 1961 and 1962. Dondi was also popular enough to spawn a live action film in 1961, produced by schlockmeister Albert Zugsmith of Sex Kittens Go To College fame, and starring a pre-Fugitive David Jansen, with unknown David Kory playing Dondi. The cheaply-made film had the dubious distinction of winning a Golden Turkey Award as one of the worst films of all time, with Kory winning top honors as the worst child actor of all time. 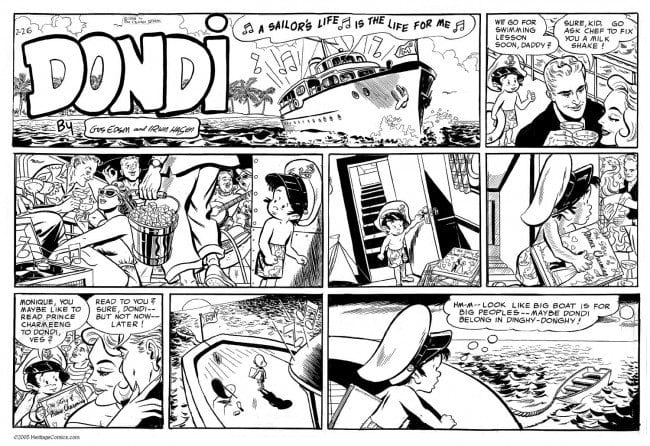 After devoting 32 years to Dondi, Hasen went on to join the faculty of the Joe Kubert School of Cartooning at the behest of his DC Comics colleague, school founder Joe Kubert. Noted comics artist June (Power Pack, Brenda Starr) Brigman, who was one of Hasen's students at the Kubert school remembered him thusly, "Irwin was a classic, old school gentleman. He could have been a character in a Howard Hawks movie. He once called me a 'Gorgeous dame.' They just don't make 'em like Irwin anymore. I already miss him." 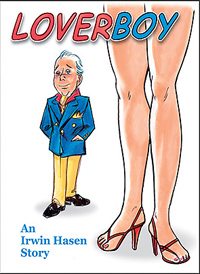 In 2009, Hasen came out with his autobiography, Lover Boy, chronicling his life as a cartoonist and some of his amorous adventures. A dedicated ladies' man throughout his life, despite his lack of physical stature, Hasen decorated the walls of his bachelor apartment with drawings of past girlfriends. He never married, and had no children, and apparently had no regrets about being a lifelong bachelor. In the 2011 NYT profile he noted, "I didn't want much," he said. "I just wanted to be loved by everyone." In that wish he apparently succeeded, since he was well loved by the staff and students at Joe Kubert School. 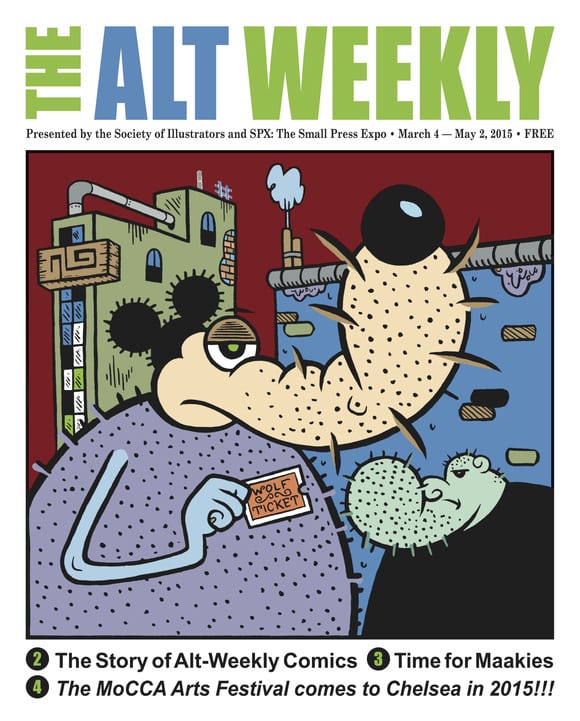 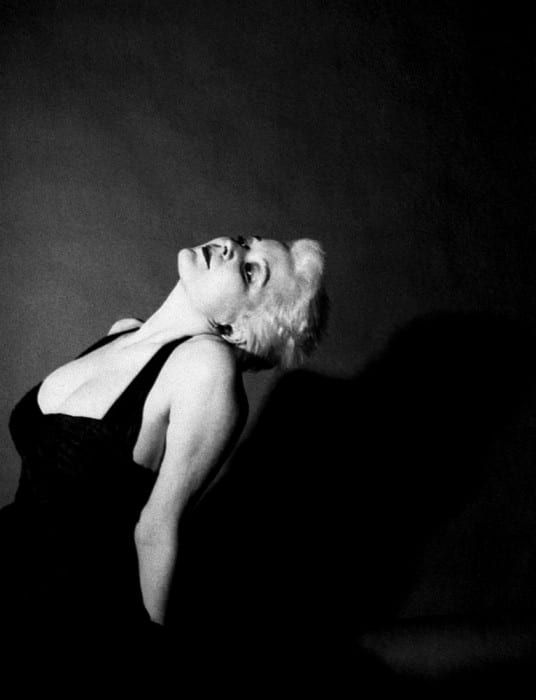