Glen Baxter has been creating strange, perplexing, delightful pieces that blur (and possibly erase) the lines between art and comics since the 1970s. His work comprises a fully realized and delightfully odd world of cowboys, Boy Scouts, knights, wimples, snoods – a vocabulary of authority and adventure turned on its head that puts one in mind of a sane Henry Darger. He cites the collages of Max Ernst as an influence, and indeed his work has much of the straight-faced drollery of an Ernst collage, the same sense of playful subversion. Edward Gorey was an early champion, and there’s a certain shared DNA in their respective oeuvres – a Surreal shiver, a laugh earned not by a traditional joke, but through tension built up by the juxtaposition of the quotidian and the utterly strange. Baxter makes his home in London, and was kind enough to answer my questions via email. His new collection, Almost Completely Baxter: New and Selected Blurtings, is available now from New York Review Comics. 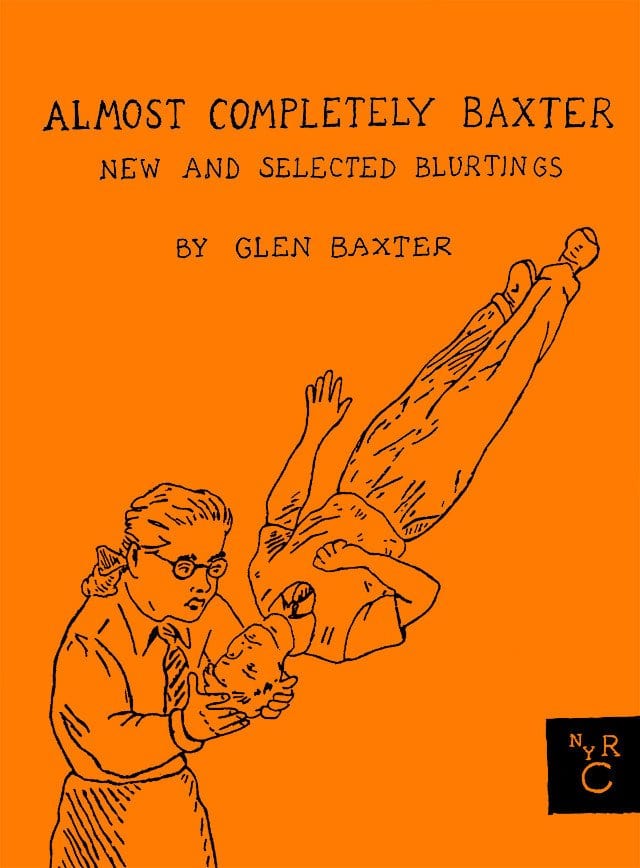 Emily Flake: I was struck by something you said in an interview about the watching a Busby Berkeley film and experiencing it as a Surrealist piece of work. Your work seems to take the surface of an art form, divorce it from its original intent, and repurpose it for your own wonderful, absurdist ends. How did you come to work this way? Do you have a love for the source material itself, or more for the aesthetics of the work?

Glen Baxter: I grew up in a Northern industrial town after World War II. The only escape from the boredom, the grit, and the grey was the local Library and perhaps more importantly the Cinema. I often used to go three times a week (they changed the program three times each week). I remember walking into this darkened cavern with the flickering screen already alight with scenes of derring-do…

An island in a hurricane sometimes and memorably a city scene shot in black and white. An odd-looking man wearing a belted trench coat was leaning up against a tall building. New York cop walked by, tapping his billy club — “Hey waddya think your’e doing, buster, holding the building up? Scram!”

The figure immediately obeys and the building falls down.

So you see this sense of fractured narrative was already in place in the mind of this young lad. Then Surrealism kicked in and I was hooked.

Of course I didn’t know it was called Surrealism. I only discovered that later, when I escaped to art school. Everything André Breton said seemed to make sense. I came home from school one day and my mom was watching Dames on our TV. That’s SURREALISM! I exclaimed.

“Be quiet, Glen — it’s a Hollywood musical," came back the reply.

Too late. I knew I was on the right track…

Your drawings look as if they'd been clipped out of an obscure children’s book from an earlier time. From what do you draw the inspiration for your drawing? That authoritative, strong line has an almost parental, reassuring, genial quality. Is that what makes it so much fun to subvert with the caption?

I was really blown away by the collages of Max Ernst: spooky, haunting, absurd. All these old steel engravings from the Victorian era with a magisterial authority subverted by the artist. THIS is what I wanted to do — but Ernst had already done it, so how to proceed?

Actually his work has been pre-dated by two English chaps, E. V. Lucas and George Morrow (the latter a Punch cartoonist).

They had collaborated on a collage novel way back in in 1911 called What a Life – it’s a photo Dada masterpiece, included in the Dada and Surrealism exhibition in NYC in 1936. It’s in the catalog.

But what to do? I had been collecting loads of old children's adventure stories, partly because they were inexpensive and had beautiful color covers. I did this by trawling boot fairs (yard sales) and picked them up for a song because nobody else wanted them. Max Ernst did exactly the same thing with the steel engravings, picking them up at flea markets in Paris for next to nothing.

So here were the raw materials!

I loved the authority of the black line and realized that with a little tweaking I could create fragments of an absurdist narrative. I was reading Kafka and Raymond Roussel, so it just fell into place. So I had managed to avoid the trap of collage and felt liberated to draw in a way that seems to evoke this reassuring quality that NOTHING COULD POSSIBLY GO WRONG. Much like the work of Magritte… I’ve never looked back. 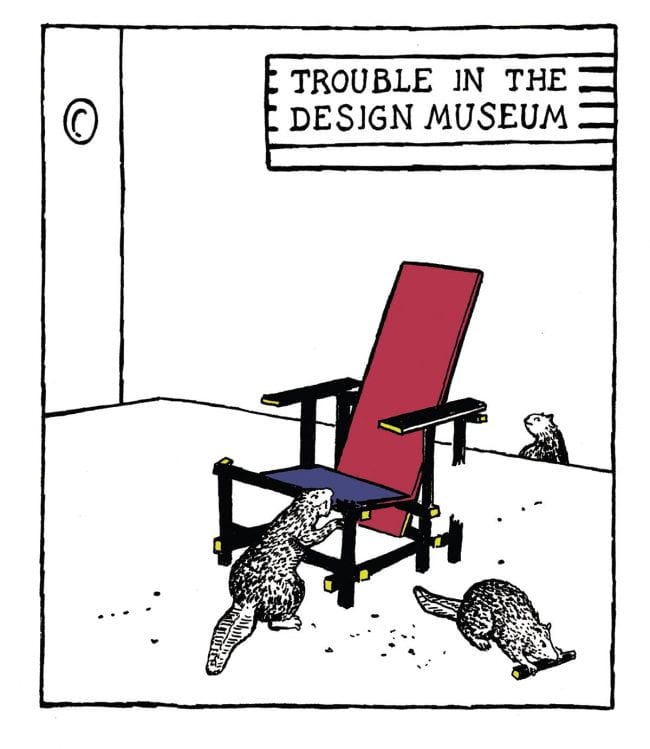 Speaking of which, your work—to my eyes—subverts and upends, but does not seem to mock. That is, there doesn’t seem to be anything mean-spirited about it, but rather a generosity of spirit, a willingness to play. At the risk of sounding unbearably woo-woo, can you talk a bit about the “soul” of your work?

How I would love to be, as you say, WOO WOO - that’s hilarious! But you’re right — I don’t want to mock and certainly not be mean-spirited. It’s meant to be an act of subversion and hence liberation! What I really want the viewer to experience is the exact feeling of not knowing what to make of things. This DISLOCATION is a vital ingredient of SURREALISM of course.

To experience what the French call a FRISSON on encountering the marvelous and the unexplained, and somehow having to try to make sense of it - as I did all those years ago…

Do you draw the images first, or write first?

Tricky one this. Usually it’s drawing, but sometimes I have a word or a phrase I want to use. You will notice that snoods, wimples, and tofu appear from time to time.

One great achievement - I think - was my drawing IT WAS RUDOLPH’S TURN TO LUBRICATE THE CINDERS. It’s absurd but it also makes a kind of sense.

Also Wittgenstein did creep in to my early books. Art and philosophy are often present.

I did originally start out as a poet. I was invited to the Poetry Project at St Mark's Church, NYC, to read from my works, by Larry Fagin (Adventures in Poetry) and Ron Padgett in 1974. I stood up at the lectern in the church and read to an audience of poets, filmmakers, and writers. They roared with laughter. After years of rejection in England I had found my audience.

After my talk I was encouraged to submit some drawings for exhibition at the GOTHAM BOOK MART GALLERY, which I did and had three shows there in subsequent years. At one of these exhibitions, I met Edward Gorey, who became a big supporter and one of the first people to buy my work. 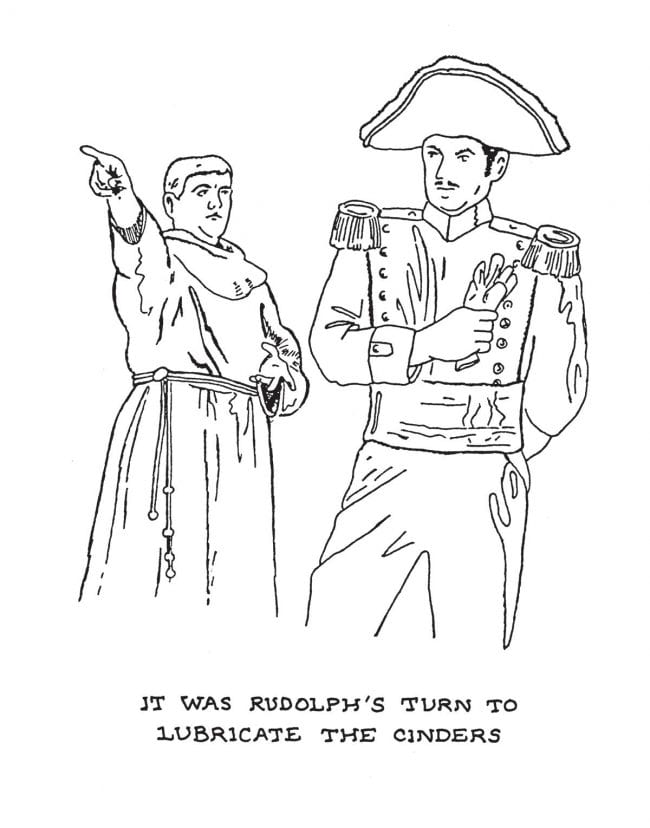 Over the course of your career, the definitions of “art” and “comics” — and the lines between the two — have blurred considerably. Has this affected your reception in the art world? How do you think of yourself as an artist?

I never thought of myself as a cartoonist. I came from art school with only a vague appreciation of comics. At that time (mid-1960s) comics were not a big deal in England. It was really the French who took up the cause, and suddenly comics were treated seriously and revered, their historical roots explored, etc… Bande dessinée is big in France, as anyone who has been to Angoulême can testify. I have had three shows there over the years.

In those early days the word CARTOON usually meant POLITICAL or SATIRICAL and TOPICAL. I think you will agree my work does not fall into any of these categories. To many it’s not FUNNY either. But in a way, I don’t TRY to be funny — it's just the way the scenario turns out! The humor is a release. I don’t TRY to make people laugh. I just want to direct them to see the strange in everyday life. It’s all around us. 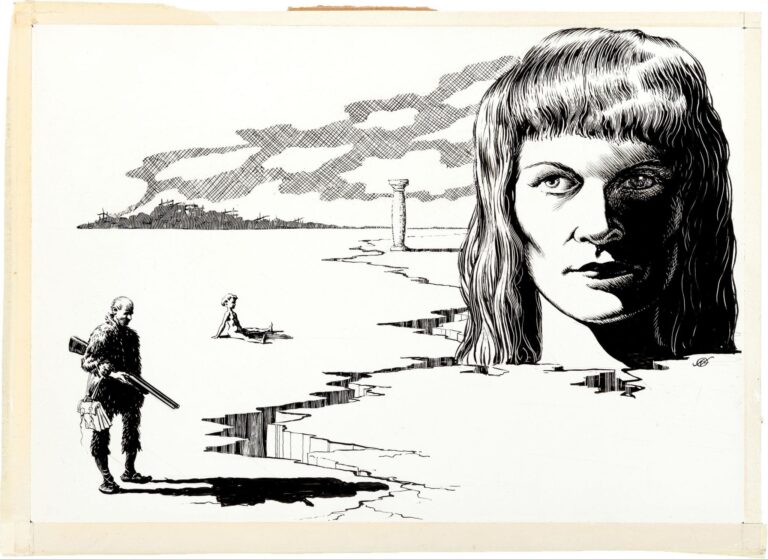 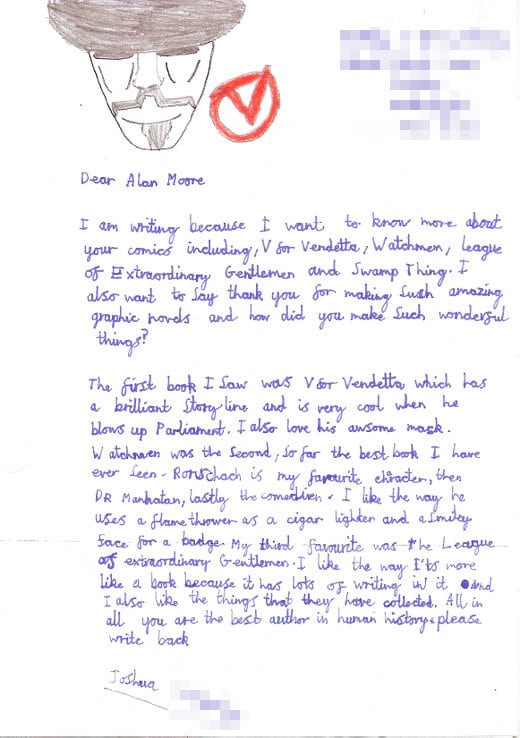