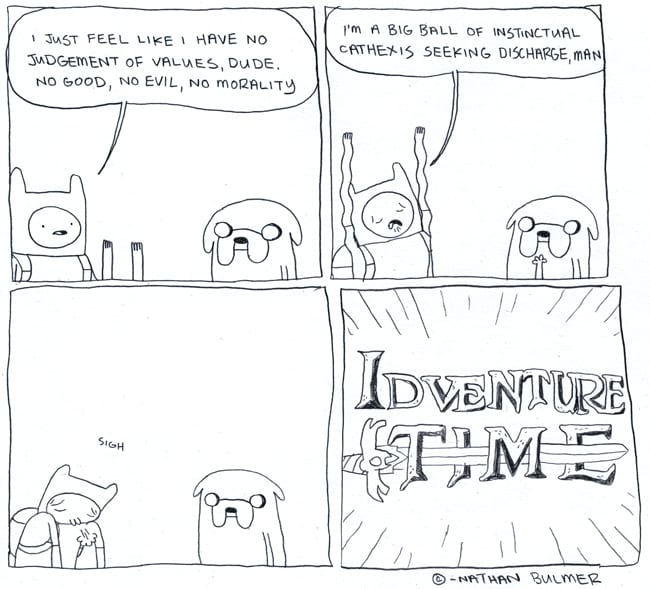 Nate Bulmer taking a stab at the latest hit of the cartoon season. He's doing this every day at the Eat More Bikes website, people, you should click on the hyperlink in a web browser.

So, you probably heard the big news, right? Not the Karen Berger thing, Abhay will cover that, that doesn't get my register clanging. No, the big news is this: a perfect comic book has finally arrived. That's right, asshole. A comic has finally arrived, courtesy of your dad's favorite comic book writer, Jonathan Hickman, that is infused "with a sense of grandeur and myth, that sort of epic poetry that links the Avengers with stories like 300." That's right, cocksuckers: a super-hero comic almost as epic in scope as Zach Snyder's 300 has finally escaped from Mount Olympus to prance amongst us mere mortals. The praise doesn't stop there, and neither does the criticism--why, Mr. Pepose almost immediately points out how much Hickman is able to get across with one Thor snort: an amount far greater than what Jason Aaron has managed to conjure in two full issues of the Thor comic. Take that, Jason Aaron! You just got Peposed!

After that bit of snark, the dial turns back to kind words, concluding with the ultimate declaration that the favorite series of Avengers fans has finally arrived. It's a tremendous review, packed to the brim with the sort of bon mots that us 'Rama Readers have been addicted to for years, and I'd highly recommend it to anyone out there who needs a refresher course in how mind-chortlingly delightful the Newsarama website is, and how breathtakingly far some of their contributors will go in their attempts to wrap their chapped lips around the shafts of Big Two super-hero comics in a way inventive enough to earn those rare grunts of pleasure that keep them going in the long winter in between renumberings of Fantastic Four comics.

Anyway. I didn't get a chance to read that Avengers comic. Well, technically, I had a whole bunch of chances, but I passed on all of them, because every time I look at one of those two-page spreads where Hickman puts up the umpteenth title page of blank white space and stylized lettering and maybe sometimes a faint half-circle, I just roll my eyes so hard it makes my forehead hurt, and who has the time, right? Anyway, here's some garbage I did read. Some of it was okay. 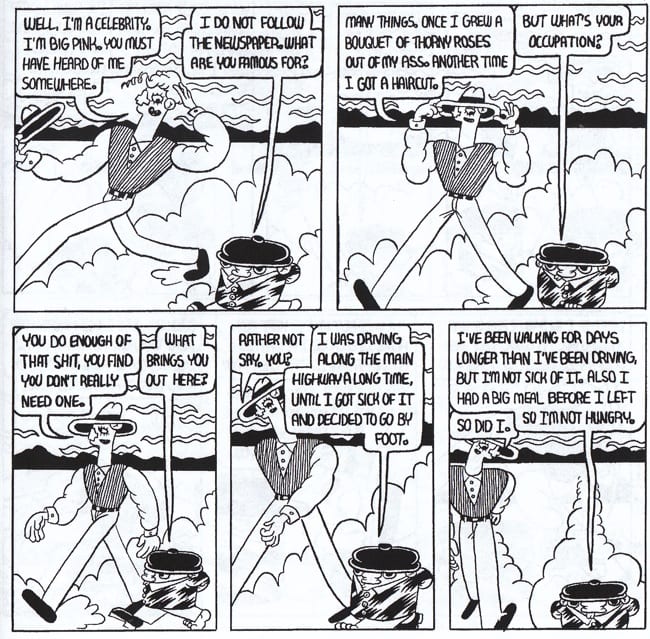 This is a compilation of comics, ranging from a six-panel piss joke to a four-page bit of conversational warfare from a couple of post-millenial Beckettian clowns. Urkowitz likes to draw people drowning themselves in inner thighs--these are the pages of a man with a deep, consuming fascination for cunnilingus, and more power to him--and yet my favorite of these comics isn't one about sex at all, but the metronomic piece of self-destruction that is "Breakfast Time", where a Wolverton/McManus/Avery hybrid stomps and slings his way into a Looney Tunes suicide. It's a good comic, even better because he just handed it to me and I didn't have to give him money or anything. 96 out 13. 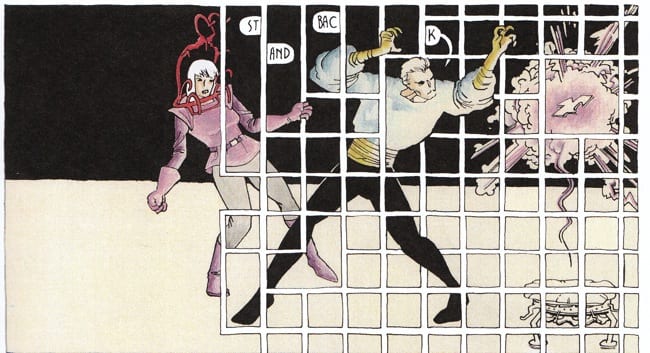 Although Dr. Strange fans will be happy to know that someone finally came up with a Dr. Strange comic that won't make them feel really tired and irritated that they picked that character out of all the possible characters to be a fan of when they were too young to know better, because wow, how many decades has it been since Dr. Strange comics weren't completely terrible? All of the decades? I bet that's the answer. For example, did you know that the whole dramatic conclusion of the last few issues of Brian Michael Bendis' 47-year run on 13 different Avengers comics was Dr. Stephen Strange replacing the black guy who had previously replaced him for a couple of months in the role of the totally unimportant "Sorcerer Supreme"? Of course you didn't know that. Why would you know that? I'm not even sure that's what happened, and I should know, because I just said something. Anyway, that first sentence started with an "although", so "although" blah blah blah, the big boner to be had here, in this, the comic that I like more than all the other comics, is that a Captain Boomerang analog shows up for exactly two pages and it is absolutely wonderful the whole time seeing him. He gets a peanut thrown in his mouth while he is sleeping, he lives on a houseboat just like Tony Leung did in the movie Hard Boiled, and it turns out that in the Copra universe there's an organization called "D.I.P.P.L.E." and that this is an organization Mr. Boomerang has some reason to live in fear of. PS: Mommy hopes you had a great summer vacation. 36 times in a phone booth. 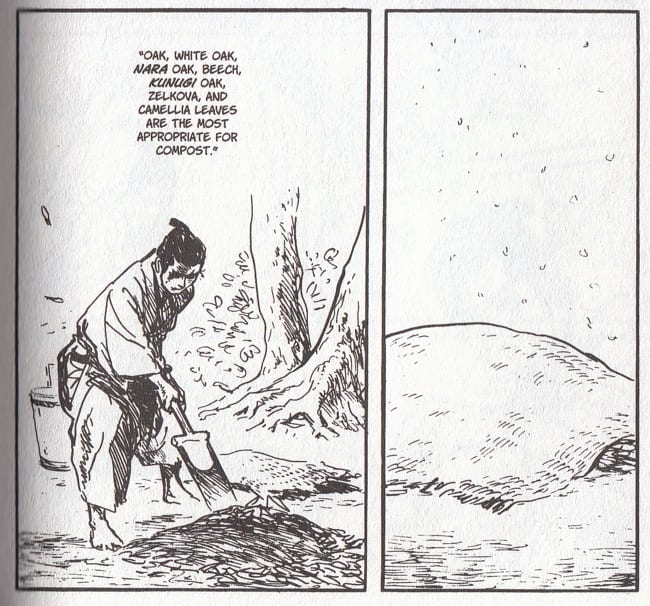 This isn't as highly regarded as another work by the creative team, Lone Wolf and Cub, and that's because it's not at all as good. None of its failings rest on the shoulders of Goseki Kojima--he draws as well as you would expect a master to draw, although you'll keenly feel the absence of small, adorable children, because he's really good at those, hubba hubba. Wait, scratch that. See, it's all grown-ups all the time, and while Koike and Kojima take as many narrative breaks as they can from the lead character, most ingeniously by creating a pseudo Nick & Nora Charles type couple that serve as excellent protagonists, the rules of the title demand that they return to the shogun's titular decapitator, so that he can speak in boring riddles while cutting off the heads of people who are seated in front of him. "River and cherries...does nature know a flower? CHOP. The flower knows." Over and over again. Barf out of 10. 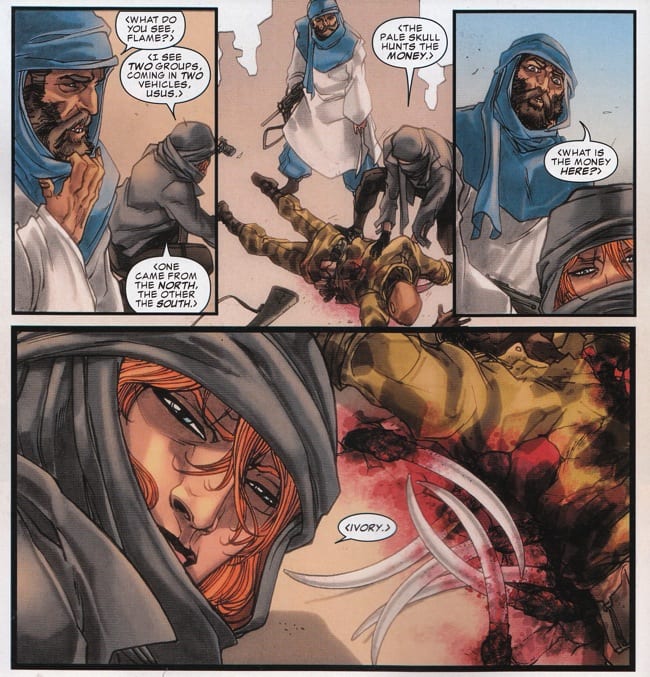 The second of three comics this week alone featuring the Punisher and the only one where he's supposed to be the star of the book instead of stealing every scene he's in; it's also the worst of the bunch, despite being better drawn than the Thunderbolts comic, which has potential because it looks irresponsible and disgusting. In this issue of Punisher War Zone, Frank Castle has to fend off the Black Widow, a character that Greg Rucka has been so hungry to turn into the same monotone lone wolf sociopath stereotype that all of his female characters become that he shoots the moon and completely forgets to give her an alcohol problem, thus making it the most unique comic book in his catalog of classics. The easiest way to beat the Black Widow is to play upon her inability to conquer white guilt--Frank Castle has no such flaw--and one cliched army of young, doe-eyed African child soldiers to patronize later, the Punisher is free until the next issue. Which, by the way, will feature Thor front and center in what has to be the most incongruous match-up of creator and character since ... well, since Marvel decided it would be a good idea for Greg Rucka to write the Punisher, actually. Four chaste hugs. 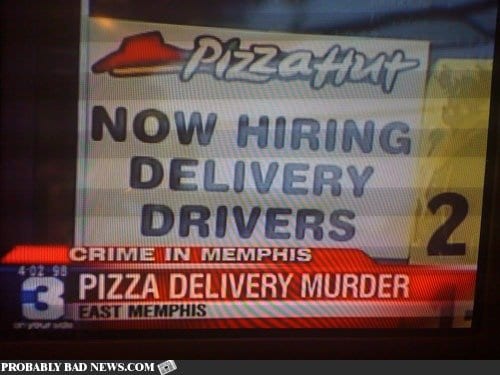 Karen Berger didn't die, but comics eulogized her this week anyways. It was announced on Tuesday that Berger, who at time of press is still very much among the living, would be "stepping down" as "Executive Editor & Senior Vice President of DC Entertainment’s Vertigo brand" after 20 years as head of Vertigo, and 33 years with DC. Merry Christmas.

Ordinarily, "doesn't have to read Saucer Country anymore" would be a cause for celebration for most people, or at least an Xbox achievement. (Oh, I kid Saucer Country because I can't think of any of the other books they publish right this second.) On this occasion, however, Berger's departure triggered a quantity of regret usually seen from the comic industry only after buffets. "My childhood!" cried Sanford &/or son, while clutching his chest.

Berger's numerous achievements were significant in the lives of many readers, readers for whom Vertigo was perceived as breaking new ground in comics. Finally, comics could be about things like dumb-ass observations of America from British writers, the kinds of shit they have in London, the color brown, Brian Wood comics, and <insert some other bad jokes here>. Many writers aspired to write the kind of comics associated with Berger, individual comics featuring original ideas and unique points of view, until they grew up and realized they could make more money writing regurgitated widescreen crossover revamp hot-new-#1 gimmicks-- and they lived happily ever after. "But now we have Image and IDW," said someone easily entertained.

Likely to be regarded as a key editor for English-speaking comics, when such a history gets written by someone with too much time on their hands, Berger's many hits make it extremely difficult for this to be one Dominique Laveau: Voodoo Child joke after another. She is expected to help pick her replacement at Vertigo, which ... just sounds like a shitty time. Don't really have a joke or a point there-- just sounds like a shitty way to spend a day.

Berger in 2008, speaking to comics-news-story-type-person (they should figure out a way to shorten that) Tom Spurgeon: "I think the reason [other comic companies] haven't been able to pull it off [i.e. their own Vertigo imprint], and not to sound snarky or conceited about it, is I think you have to be willing as a company to really make in a stake in the creative people who are going to be writing and drawing the material, in terms of the freedom you give them creatively and the ability to really go the creator-owned route and original-idea route." So, yeah, duh-doy, that person's gone, so gone. Good luck, suckers. 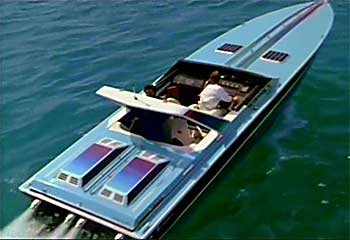 Money in the Pocket 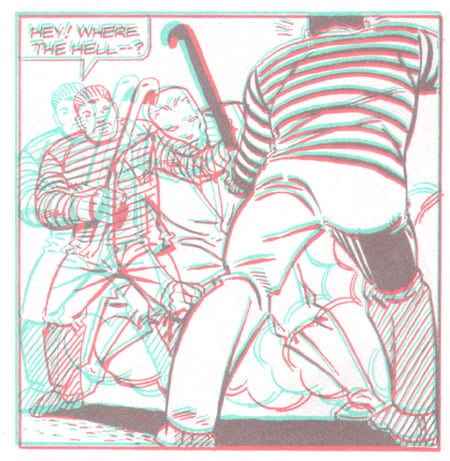