Infections turn our bodies against ourselves and our neighbors against us. Disease is a good metaphor for the way that humans are our own worst enemies, which is why zombie films have become such a popular way to represent the apocalypse. The disease is us, so we're the disease tearing out our own throats.

Hitoshi Iwaaki's Parasyte is a seinen manga series that reshapes zombie tropes, sharpening them to an odd, ugly edge. Though it was originally serialized in 1990-1995 and translated into English twice already, its themes of disease, environmental catastrophe, and self-loathing continue to resonate wetly. The nightmare in Parasyte is us, which for Iwaaki, means that we need to take pity on our own monstrosity.

The manga begins with an oddly coordinated assault. Snake-like things slither into the bodies of humans one evening and take over their brains, a la Invasion of the Body Snatchers. The "parasytes" (the English translation of the manga uses this spelling throughout) transform the human head into a shape-shifting amorphous mass, which can grow eyes, knife-edged tentacles or teeth. When the parasytes wake up hungry for flesh; they dismember humans and devour them.

Seventeen-year-old high school student Shin is attacked by one of the parasytes, but because he's listening to a walkman, it can't get into his ear. When it tries to invade by the nose, Shin jerks awake and stops it. It burrows into his right arm instead. The parasyte, which Shin names "Migi", or right, retains its shape shifting and fighting abilities, but since it didn't get to the brain it doesn't want to eat human flesh. Soon Migi and Shin form an uneasy alliance for self preservation, fighting off other infected humans, and trying to figure out where the parasyte invasion came from in the first place.

At first, Shin thinks that the parastyes must be aliens. It's a suggestion which again evokes Invasion of the Body Snatchers or, going back further, H. G. Wells' 1897 novel The War of the Worlds. In these narratives, aliens took the place of Western colonizers, conquering, murdering, and infiltrating society. Wells imagined the British in the place of the Tasmanians whom the British had slaughtered, and the Martians in the place of the British doing the slaughtering. The War of the Worlds asks, "what if they did to us what we did to them?" Or more succinctly, "what if we did this to ourselves?" Thus, alien invasion and zombie narratives share a similar terror of the self as other, or the other as self. We are hateful and terrible, and we are coming for us.

As in The War of the World's, where the ugliness of the Martians is a stand-in for the ugliness of the British, so in Parasyte the monsters and the humans are equally physically vile. The parasytes morph and warp into terrifying body horror shapes, dripping eyes and fluid. And so do humans, as the parasytes take them apart in repulsive mince meat murders, spraying viscera and limbs. The invaders and invaded are joined in a single splatter of flesh, their features rearranged into nightmare, as the bloody colonizers enact Japan's bloody colonial history upon the Japanese.

If the vampiric, boated Martians in War of the Worlds are a kind of satiric caricature of British imperialism, then the image of a man drenched in blood, holding a severed foot which he is about to stuff into the monstrous mouth that has become his head could be seen as a vision of the Japanese in Manchuria—rapacious, cannibalistic, devouring. Iwaaki's illustration is the frontispiece for a chapter titled "Humans", because this monster is a human, and this human is a monster. It's a drawing of what the colonizers look like.

Iwaaki, like Wells, relishes shoving his countrymen's monstrosity down their gullets. But unlike Wells, he's got an alternate image of colonization which is perhaps as ugly, but somewhat less feral. Japan's most recent experience of imperialism post World War II was being invaded rather than invader. The result left hundreds of thousands dead in atomic devastation, but longer term there was an at least somewhat successful collaborative effort at democracy.

Along those lines, Migi does not destroy Shin, but makes him stronger in certain ways, even as he imposes difficult and sometimes cruel dictats. Migi is worried that humans will experiment on him or kill him if they discover him. He threatens to cut off Shin's other limbs or blind him at one point if he tells anyone about the parasyte infestation. But he also defends Shin and works with him to kill other parasytes—setting up the typical seinen dynamics of escalating boss challenges. After a parasyte damages Shin's heart, Migi heals him, leaving portions of himself in Shin's body. That gives Shin superspeed and strength, while weakening Migi, who has to sleep more often and more soundly. Migi and Shin become more like each other—"mixed" as one parasyte puts it.

In fact, Migi arguably becomes more human-like than Shin. One of the more iconic images of the manga is of Shin sitting morosely on his bed while Migi stretches off to the side, its eyes and multiple secondary limbs sprawling among books, while its lips are pursed in contemplation. Shin's something of a slacker as a student, but Migi is voraciously curious. Iwaaki's somewhat awkward representation of faces works perfectly here, as morose Shin (wearing a shirt that declares "Misery: Confusion") looks deeply cranky and stiff in comparison to the fluid lines and proliferating eyeballs of his own right hand. As often in representations of colonization, the invading colonizer is presented as being more civilized and more dynamic than the colonized, as it exploits Shin's body more fully than Shin could himself.

The other parasytes also see humans as exploitable resources—specifically, as food. Parasytes don't really want to conquer; they want to eat. That makes them more like animals than like invading colonizers. And in fact as the manga unfolds, the alien hypothesis is tossed aside in favor of another. There are numerous hints that the parasytes were grown in a lab as a Malthusian environmental measure, to reduce the human population in the name of putting less strain on the planet.

The parasytes, then, like humans, are of human origin, and, also like humans, they are positioned at the top of a natural food chain. Like us, they're part of the earth—and like us, they're vulnerable to human destruction of our own habitat. Shin beats other parasytes repeatedly by poisoning them, once with toxins illegally dumped in the woods. The parasytes can be a metaphor for the way humans kill themselves through colonialism. But  they're also a metaphor for how humans kill themselves through ecological destruction.

Parasytes are humans as destructive, terrifying killers—remorseless perpetrators of genocide, cannibalizing other animals and the landscape itself for their own hunger. But parasytes are also humans as the victims of genocide, and as that which is eaten. That's why Reiko Tamura, an unusually smart parasyte, who appears to be the series' main antagonist for a while, abruptly stops antagonizing, and instead makes a plea for mercy. "We are weak. We don't have the ability to survive on our own. So take it easy on us," she says.

The reversal here is similar to the conclusion of Richard Matheson's 1954 vampire novel I Am Legend (a huge inspiration on zombie fiction) in which the protagonist, Robert Neville, realizes after a book packed with murdering vampires that he's the bad guy blight upon society who must be destroyed.

Matheson's novel is a brief for genocide. It offers no possibility of compromise. Either the vampires die or the humans die. There's no middle ground. Which is a bleak vision, inasmuch as humans and vampires are both humans. If genocide is the only way people can live together, then people can't live.

Parasyte, for all its explicit splatter, is more optimistic. Parasytes need human beings to live, one way or the other—Migi is a fearsome opponent, but even it needs a hand. Tamura decides to have a human baby with her human body and another male parasyte, and while at first she seems to regard the child as a nuisance (and perhaps as potential food), she eventually comes to care for it, and even to try to protect it.

In many respects, she's a much more interesting, complex, and sympathetic character than Shin, who mostly stumbles around, led by his right hand. In contrast, Tamura wants to know where she comes from, and slowly becomes over time—not more human, but a different human, with unexpected interests and an odd sense of humor.

In fact, the parasytes in general are more appealing than the mostly bland humans. Mr. A is impatient and cranky; Miki love experimenting with human expressions, twisting his face this way and that and laughing and babbling while fighting to throw Shin off his game. And of course Migi is the real star of the series, goggling thoughtfully at books, issuing deadpan threats, or unexpectedly transforming into a giant phallus because it's interested in human flirting rituals. It's like a combination of the Shmoo and Mr. Spock.

The parasytes crawl into human brains and look around, but by the same token, readers are encouraged to crawl into parasyte brains and think and feel with them. People—all eyes and knives and blood—are the most frightening things in the world. And people, all eyes and flesh and blood, are the most vulnerable things on a very vulnerable earth . We are the infection we suffer under, and with. Which means that, for Iwaaki, even the most monstrous among us need a human hand. 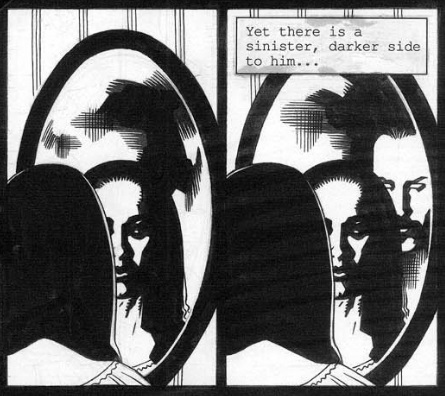