Today we have an interview with Gary Groth about Zap conducted by yours truly.

Dan Nadel: Tell me a bit how you see the importance of Zap as a publishing model (as the launch of the underground comic book business, (such as it was), and then as an ongoing publishing entity through various houses.

Gary Groth: It wasn’t just Zap as a model, but the entire underground comix publishing ethos, of whichZap was probably the most prominent example. For the first time in the history of comics, there was a community, a movement, a collective —however you want to characterize it— of artists who took it for granted that they would own their own work, function as autonomous creative artists, and wrote and drew comix as a form of personal expression. And there were publishers who sprung up who instinctively honored this principle (Last Gasp, Rip-Off, Print Mint).

I see Zap as part of the lineage of historically important and aesthetically ground breaking comics anthologies, the first in this lineage, of course, being Mad, which influenced all the Zap artists; next,Humbug, then witzend, then Zap. (Mid-way through Zap’s run, there was Weirdo and Raw, of course.) Each one of these comics anthologies were created by the artists themselves in opposition to the prevailing economic and creative standards of the comics industry; each one of them was created in order to give artists greater freedom to create the work they wanted to create, without the editorial restrictions placed on them by commercial dictates;  and the publishing rights and original art featured in each of them (with the exception of Mad, which was at least published by the most enlightened publisher in the history of comics to that time), was owned by the artists —collectively, they represent the long fight for cartoonists to take control of their own destinies. They are the Humbug co-op (composed of Harvey Kurtzman, Arnold Roth, Al Jaffee, Jack Davis, and Will Elder) wanted the freedom to edit, write, and draw a humor magazine suitable for grown-ups; Wally Wood hated mainstream publishers, may have hated editors even more, and created witzend as a place where mainstream cartoonists (and a few young underground artists like Art Spiegelman) could do whatever they wanted, free of the suffocating editorial demands imposed on them by mainstream comics editors; and Zap, of course, created by Crumb, became a collective where the artists could do whatever they wanted. As a model of artists taking their “careers” into their own hands, it can’t be beat.

And Simon Hanselmann is here with Day 3 of his diary, in which he returns to the office. I want to go to the office!

Brumsic Brandon Jr., the creator of the comic strip "Luther", one of the first and few comics strips to focus on an African American cast, has passed away.

And Alex Dueben interviews Bobby London about his new Popeye book, as well as Hillary Chute and Patrick Jagoda about their issue of Critical Inquiry.

I'm excited about this Sadistik book, which I only just heard about. That's an under-published area of comics, even in this reprint-glut age.

And in self-promotion news: Hey, read some more about my new book, Dorothy and Otis: Designing the American Dream! There is a comics connection, even: Otis Shepard apprenticed with Bud Fisher in San Francisco. So there you have it. 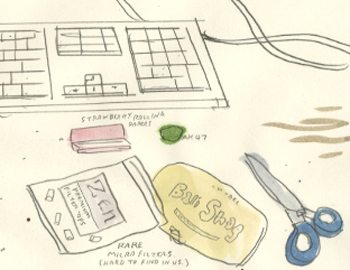 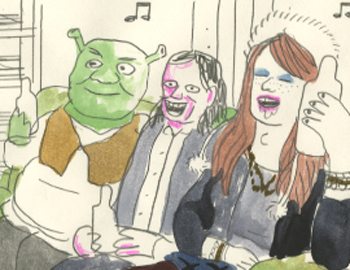