In order to appreciate what follows, I want to first ask you to put yourself in this woman’s nose. 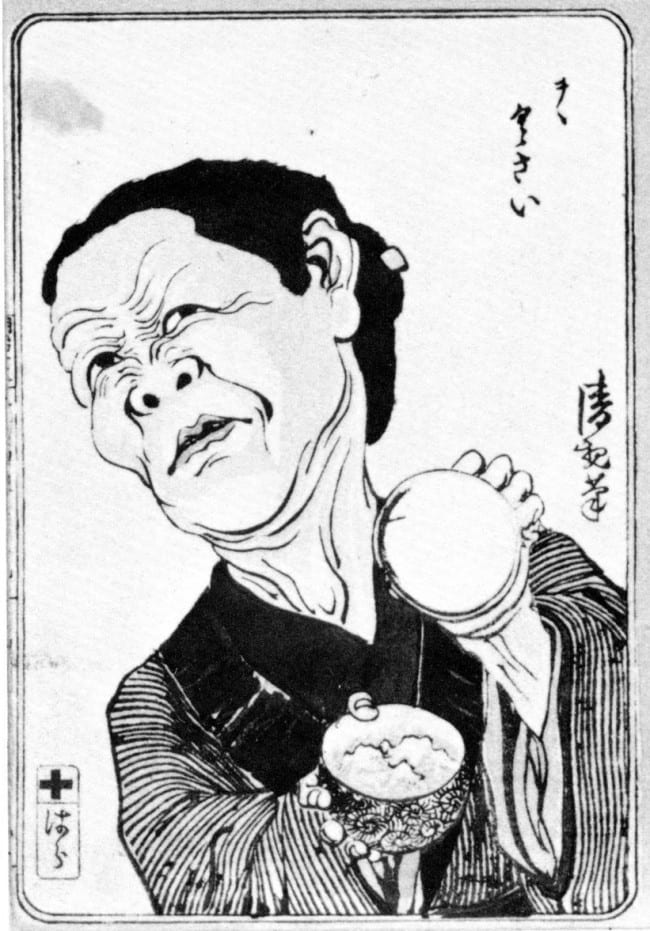 She is from 1883. Judging from her looks, I would say she is at least in her seventies. She thus would have been born well before the Westernization program of the Meiji government.

This one panel comes from a print in a series of prints by the late ukiyoe master Kobayashi Kiyochika (1847-1915). If you have a serious interest in manga history, you might have come across Kiyochika’s biting cartoons from the Marumaru Chinbun, a satirical weekly paper from the late nineteenth and early twentieth centuries. This particular image is from a series of woodblock prints on the subject of “one hundred faces,” a popular theme in comic theater in which the performer would use various small props – from a cloth around his head to chopsticks up his nose – to quickly mimic one character or personality type after another. Such gags had influenced visual artists already in Hokusai’s time. Kiyochika’s version is just thirty faces. Building upon the cartoonist’s interest in social satire, one shows a man made ugly trying to work a toothbrush in his mouth. Another shows a fat baby drooling while taking a nap. This one shows an older woman responding “Uuu, kusai” – “Phew, stinky” – to whatever is in the vessel she has just opened.

I am not sure what exactly is in that bowl that smells so bad. I think it's spoiled rice. There are clumps with bumps, tinted lightly yellow, suggesting to me rotten sticky grains. Whatever it is, put it away. Empty the bowl. Imagine instead that it is filled with the following. 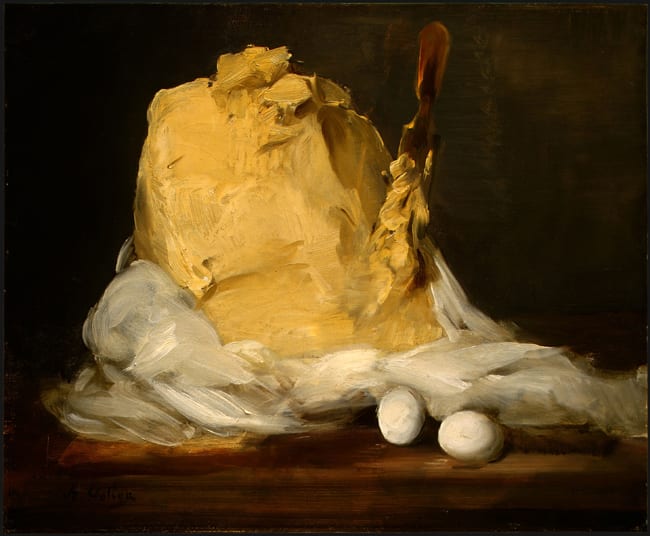 “A pile of butter, so real-life in color and energetically laid-on texture that it might have been painted with butter itself,” wrote a New York Times critic some years ago. Titled Motte de beurre, the painting is by Antoine Vollon (1833-1900), a successful Salon painter from the late nineteenth century. Coincidentally, it is dated 1885-1895, making it practically a contemporary of Kiyochika’s disagreeing face. Of course the woman is not reacting to what is depicted in this painting. But I want you to imagine that she is. I want you to imagine that to this old lady from the late nineteenth century, nothing could be more repulsive to her Japanese nose than a mound of rich, creamy butter. As you will learn below, this is not so far from the truth.

Now, it is time to reset this column. It’s not about alternative manga. It started out thinking it was, thinking it could sum up the '50s as a simple prelude to Garo and some of the hard political works in venues like Shōnen Magazine c. 1970, thinking it could use gekiga in the kashihon period as a foil to its “mainstream appropriation” in the '60s. But that was a misunderstanding on my part. The ideas hold water but leak like hell. Now this column is about kashihon and the history of gekiga before it went pornographic in the '70s, which – if you allow for an abuse of language – is a history of guns and butter.

Guns for two reasons. One because gekiga from the mid-'50s into the '70s is possessed with firearms, typically pistols but by the late '50s also automatic weapons. The sensibilities of gekiga are built largely on the foundations of American movies and novels in (chronological order) the mystery, thriller, gangland, hard-boiled detective, Western, and spy genres, and their offshoots in Japanese entertainment like Nikkatsu. French and British entertainment also figure, but to a much lesser degree. Guns, second, because the popularity of American entertainment in Japan after World War II cannot be separated from the Occupation and the continuing presence of American military installations in Japan thereafter. Not that American movies, music, and fashion weren’t popular before – they were, particularly in the 1920s and '30s – but their importation and popularity were many fold larger after 1945, and tied initially to SCAP-led campaigns to disseminate American values and enlarge the Japanese market for Hollywood entertainment. The stampede of translations of mystery and hard-boiled novels in the '50s, which became important source material for Tatsumi Yoshihiro and the other young artists at Hinomaru, rode forth on Hollywood’s coattails. For the development of manga, the military arrangement between Japan and the United States contributed in also another, smaller, more informal way. Had “ten-cent comics” not trickled out from bases onto the Japanese secondary market or into the hands of Japanese friends, the course of manga would have been undoubtedly different, and early gekiga would not quite have taken the shape it did. The impact of American comics and magazines on gekiga was even greater after the mid-'60s, but by then direct retail sale had displaced the bases as the prime vehicle of their dissemination, and girls had displaced guns as the main foreign fetish.

How about butter? The term is now passé, but for much of the twentieth-century “batakusai,” literally “butter-stinking,” was used to describe things, namely Japanese things, from ways of dressing and ways of doing business to ways of writing or cooking, that were thought overly Westernized and offensive to Japanese taste. In manga, the term is often used in the context of Tezuka Osamu’s early work, even by the artist himself. In the English language edition of A Drifting Life, Tatsumi describes Saitō Takao’s debut The Air Gentleman (1955) as looking “awfully American.” What he says in the original Japanese is that it looks “awfully batakusai.” In a lengthy series of interviews from 1993, Tsuge Yoshiharu described his own first mystery works from late 1956 and 1957 as “batakusai.” Many of the artists involved in the shift from “hardboiled” kashihon to young adult magazines in the mid- and late '60s readily admit that their tastes, shaped by artists ranging from Jack Davis to Jean-Claude Forest, tended on the buttery side.

The smell of butter, in other words, the stink of the Western, appears at many starting and turning points in the history of manga. Gekiga was no exception. What follows is an introduction to the idea of batakusai. It is typically the primary term, the mode of expression that comes first, against which emerge a number of secondary ones, amongst them the cinematic, the realistic, the tragic, the mature, and the authentic. It is these secondary expressions upon which I think much manga history and theory is based, despite the fact that they are, in many cases, the subordinate ones, particularly at the moment of their emergence. So what I want to do is put the horse before the cart, and show how the batakusai – and with it the foreign (in this case Western and particularly American) and a particular brand of humor – functioned as a crucible for some of the core forms of expression in postwar manga. Guns will be introduced gradually, first in the context of comic Westerns and then increasingly over the posts that follow as I move into gekiga.

Please excuse the low number of manga this time around. Before getting into the butter of Japanese comics, I first need to cover some historical and conceptual ground. 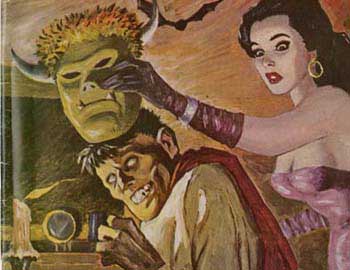 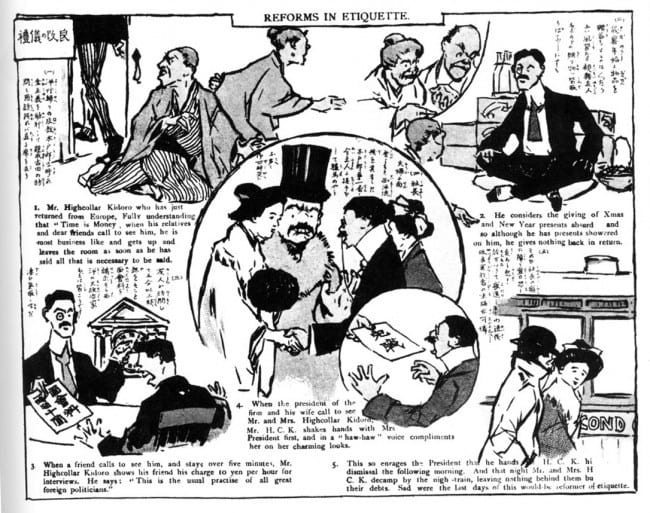