The most recent issue of Previews announced that the 22nd issue of Fantagraphics' flagship anthology MOME would be its last. Conceived initially as an incubator of sorts for a group of youngish cartoonists by editors Gary Groth and Eric Reynolds, it quickly mutated and also became a home for short work by established cartoonists, short translated work by European cartoonists, and eventually any number of bizarre one-offs. That initialstrategy was abandoned because many of the earliest contributors, including Jeffrey Brown, David Heatley, Anders Nilsen, and Gabrielle Bell, no longer needed the exposure or this particular publishing outlet.

As contributors started dropping out of particular volumes and then the anthology altogether, it became convenient to print short works of established artists like David B, Killoffer, Jim Woodring, Lewis Trondheim, and Gilbert Sheldon. As Groth dropped out of actively editing and curating the anthology, it took on more of Reynolds' more idiosyncratic tastes, culminating in the magnificent nineteenth issue, which featured the comics of Josh Simmons, Olivier Schrauwen, T Edward Bak, Gilbert Hernandez, Tim Lane, and others. During the course of the anthology's run, Reynolds went from being in charge of Fantagraphics' publicity to becoming the company's associate publisher. I briefly spoke to him regarding his decision to end his anthology's run.

Rob Clough: Why did you choose to end MOME with #22?

Eric Reynolds: I knew I was facing the end at some point soon, I just couldn't quite decide when. At first I was thinking 25, which seemed like a good, round number. But then I kept thinking about 22: it's a personally resonant number with me. Myself, my wife, and my sister all have birthdays on a 22, and my wife and I got married on one. My daughter was due on my birthday, and although she decided to come a day early and was born on a 21st, I consider her an honorary member of the '22 Club.' Anyway, once I got that idea in my head it just felt right.

RC: Why did you feel like you were facing the end?  Were sales actively dropping or were they just flat?

ER: Just flat. It was breaking even or perhaps slightly better. Gary and Kim seemed happy to let me continue because they knew it was a labor of love, but I felt like I didn't want to let it get to a point where Fantagraphics was subsidizing MOME just for the sake of it. Like I  said, it just felt right to do it now. I know how many books we publish, how narrow our margins are as a company, and as much as I love MOME, my first obligation is to Fantagraphics and I felt like this was the right move, right now.

RC: Was the time investment too great for you at this point? Or was it  simply a matter of burnout after doing this for five years?  (Or some combination thereof?)

ER: Not quite either, really. I wasn't burned out on MOME, but I was slightly frustrated by my own inability over the last year or two to be as proactive an editor as I'd like to be. So if anything, it was that I couldn't put more time into it. If I could work full time on MOME and put it out monthly, I would love that. It has never been a  huge time investment for me, as a quarterly. I was pretty conscious from the get go of creating MOME as something that I could edit and put together without it becoming too much of an investment of my time, with the relatively consistent design template and a limited editorial voice.

RC: What has been the reaction of the artists you're currently publishing?

ER: They've all been great. I don't think I could take any pride in MOME if I didn't think most of the artists enjoyed the experience. Maybe they're just being nice, but I've been very flattered by the reactions I've received.

RC: How did they react when told the anthology was ending?

ER: They seemed bummed, but happy that it lasted as long as it did. They  were all very kind, that's the best way I can put it. It made me feel good.

RC: Which of the serials running in MOME do you foresee being collected by Fantagraphics?

ER: Well, hopefully most of them.

ER: That's not for me to say. I hope it has a shelf life beyond the present, but I am in no position to say. I hope my daughter can read it one day and see what her old man was once up to.

RC: MOME really seemed to hit its stride again recently; do you regret ending it now?

ER: Ha! Well, yes and no. Doing this last issue is bittersweet, it feels like the strongest issue to date for me, and does make me second-guess myself a bit. But really, I'm pretty comfortable with the decision. It just feels like the right time.

RC: How do you compare MOME to other alt-anthologies that had significant runs, like Zap, Arcade, Weirdo, Raw, D&Q, Non, and Kramers Ergot?

ER: I don't know. It seems absurd to me to compare it to something like Zap, Arcade, Weirdo, or Kramers, which all seemed like such perfect representations of the art comic zeitgeists of their time. I'm not sure MOME ever had the sheer focus of any of those anthologies. Which is fine, but different. 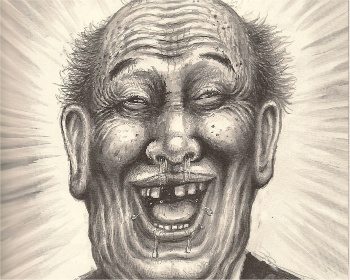 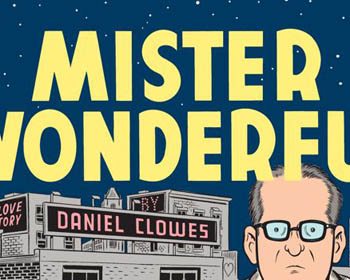